Every year I say that I’m not going to throw a big, elaborate birthday party for Baby Lighty. And every year, I do exactly that. But when your nearly-three-year-old comes to you and asks you when will it be their birthday party, what can you do?! Of course, every party has to have a theme, and this year, we decided to throw Baby Lighty a pirate party!

I think it was safe to say that this year we really got stuck into the theme! It was definitely one of the easiest themes we’ve gone with, and there’s lots that you can do for a pirate themed party. Of course, I had a trusty Pinterest board full of ideas to help us out!

So what exactly did we do? Here’s how to plan a pirate themed party:

All parties start with an invitation. I’ve said before that I always think it best to send paper invites if at all possible, as people are more likely to respond than they do to an email or Facebook event. This year’s pirate party invites were probably the quickest I have ever made. I always make them A5 size, and I tend to use Microsoft Word to do something simple but effective.

I chose a font which had a slight pirate feel to it; I chose Trattatello, which is a standard Microsoft Word font, and used a little poem about Baby Lighty turning three. I then created a treasure map look using simple dashes and an X in text boxes, a free clipart silhouette of a ship, and a picture of Baby Lighty in a pirate hat that I’d taken some months earlier.

The finishing touches to the invites was to print them, then rough tear the edges before using a cold tea bag to discolour them! I had so many comments on how good they were, more than I think we’ve ever had before, and yet they were by far the quickest and easiest to make!

Decor is always important in setting the party theme. Pirate parties are really easy in this respect. The likes of Jolly Roger flags can easily be purchased online or in party shops, and we also bought some red and black balloons, some of which had a skull and crossbones on them. 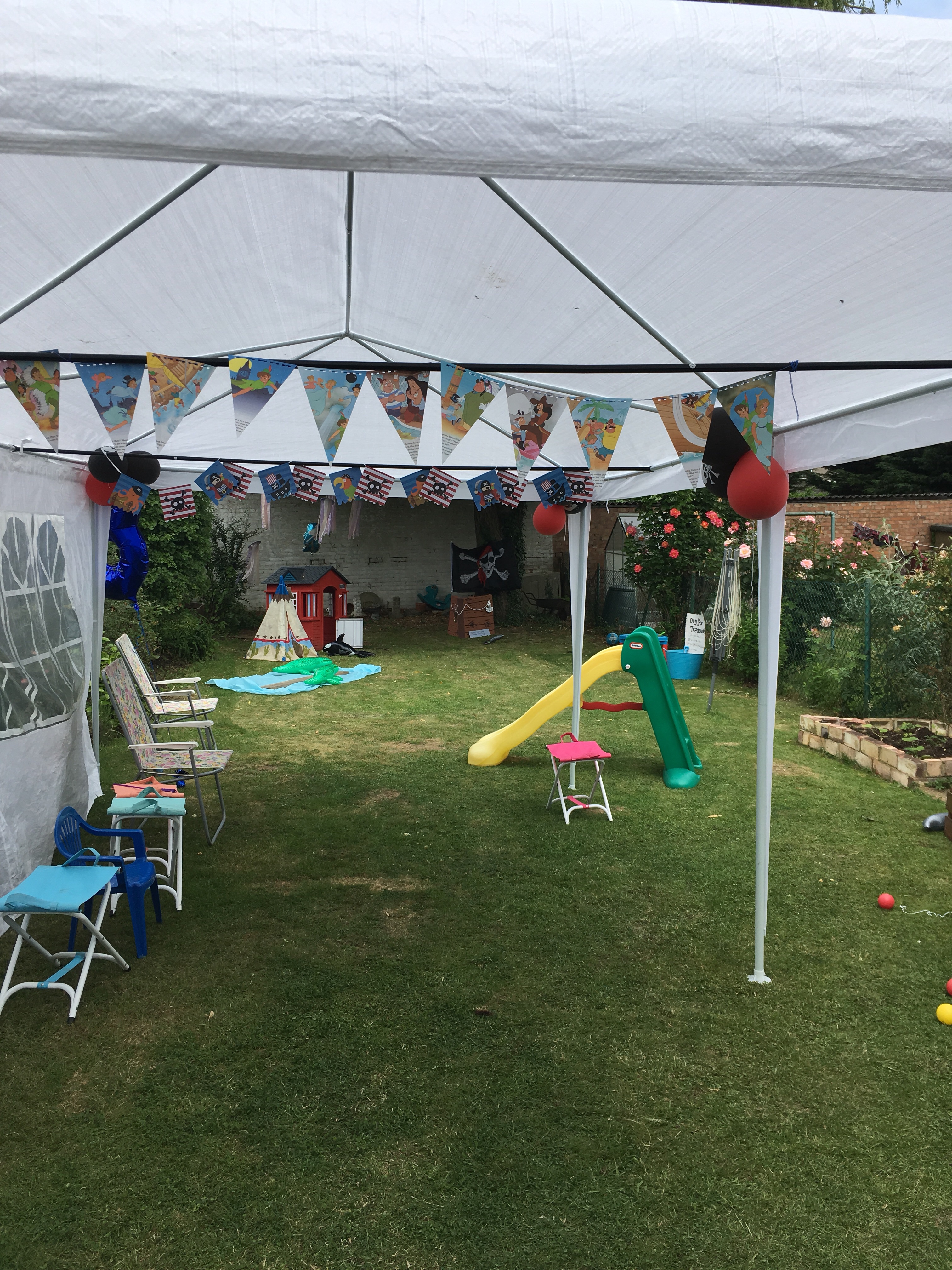 The party marquee, with balloons and bunting.

We used the balloons around our marquee for decoration (yes we own a party marquee…or maybe three!) and teamed them with some lovely colourful ‘friendly’ pirate bunting along one beam. On the other beam, I used some bunting which my lovely friend at Retro from Scratch created for me from the pages of old Peter Pan books.

I also picked up an anchor and some bottle fairy lights from Poundland, which we used along one of the fences to add a bit of a pirate feel.

When it came to crafts, we really got stuck into them for this party! Part of that was for the decor. We made plenty of signs to go around the garden, both as ‘instructions’ and as decor, and we also made arrow shapes which we painted up in bright pastel blues and greens and white in order to make a ‘signpost’. We used one of our fence posts as a natural post to stick the finished arrows to, to point guests in the right direction of various activities and zones within the garden. 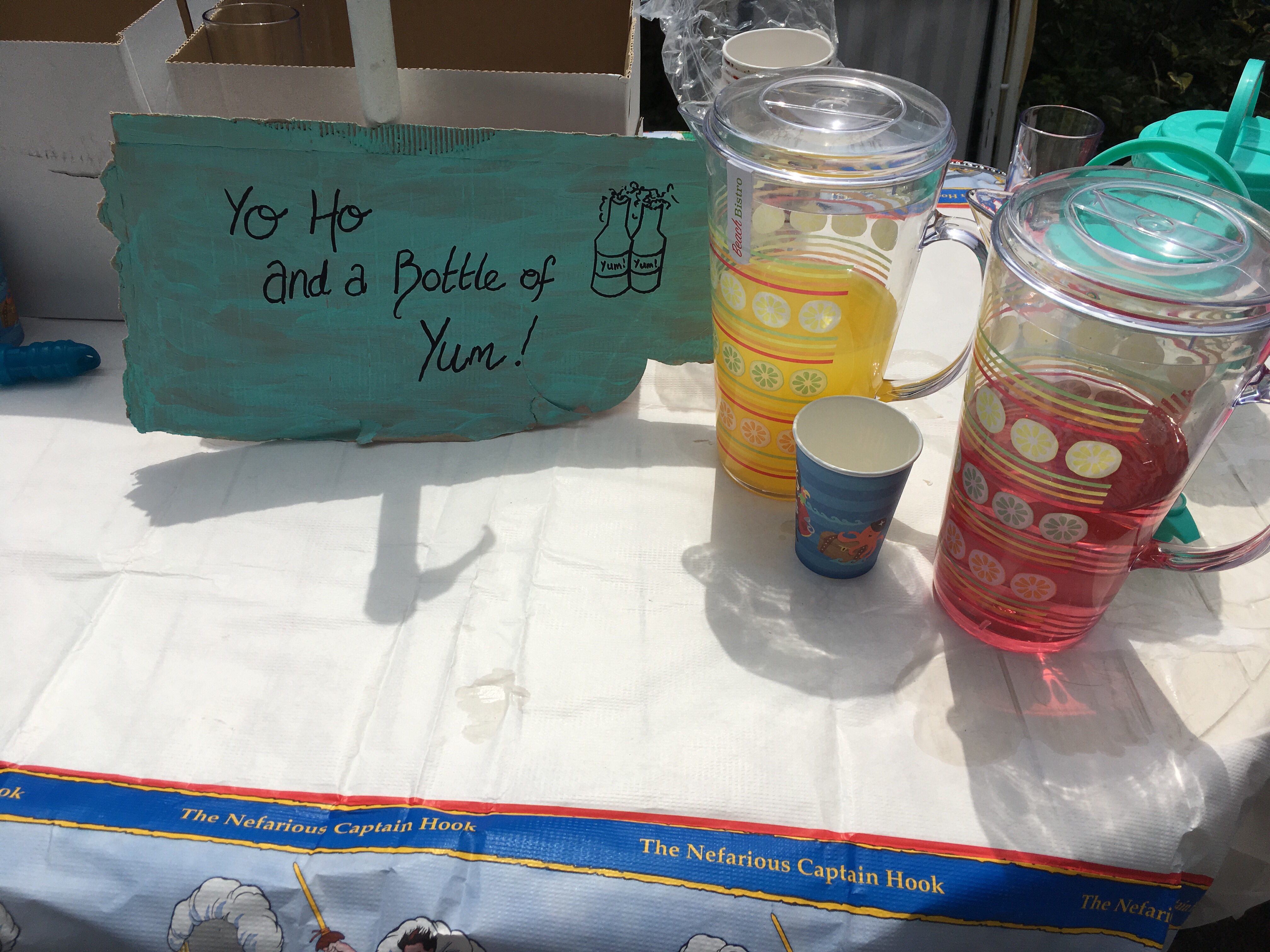 One of the drinks signs.

The craft that I was really pleased with were our jellyfish! We made simple jellyfish by painting paper plates in the same blues and greens as the signpost, and added a pink shade too. I had this vision of them hanging in our willow tree and blowing with the wind, and once we’d added the tissue paper legs, they were ready to do exactly that! We had lots of compliments on our jellyfish on the day, and I was really pleased with how they looked once finished! 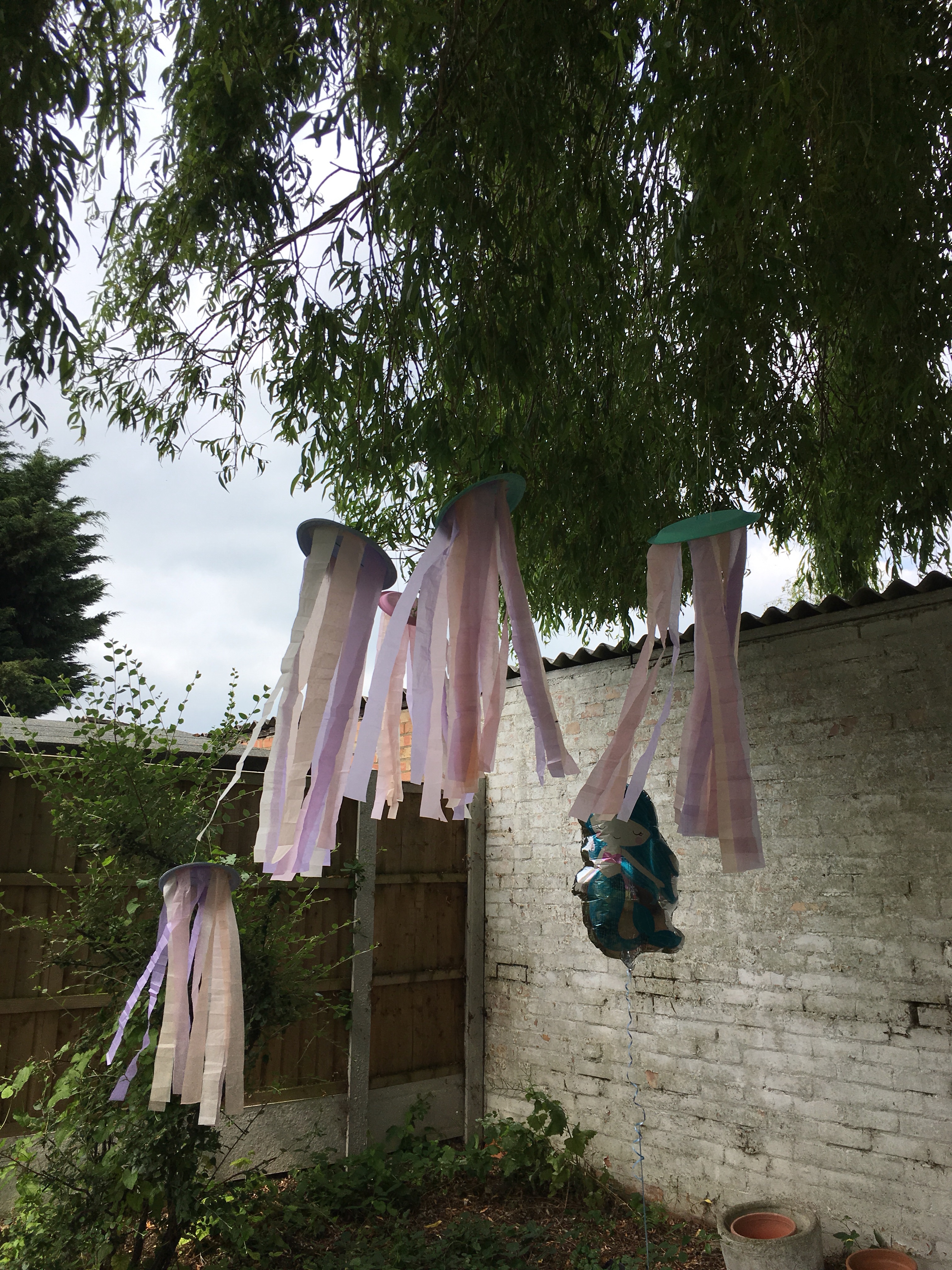 Mr Lighty went to town on creating the hull of a pirate ship out of cardboard; it even had a steerable steering wheel!! 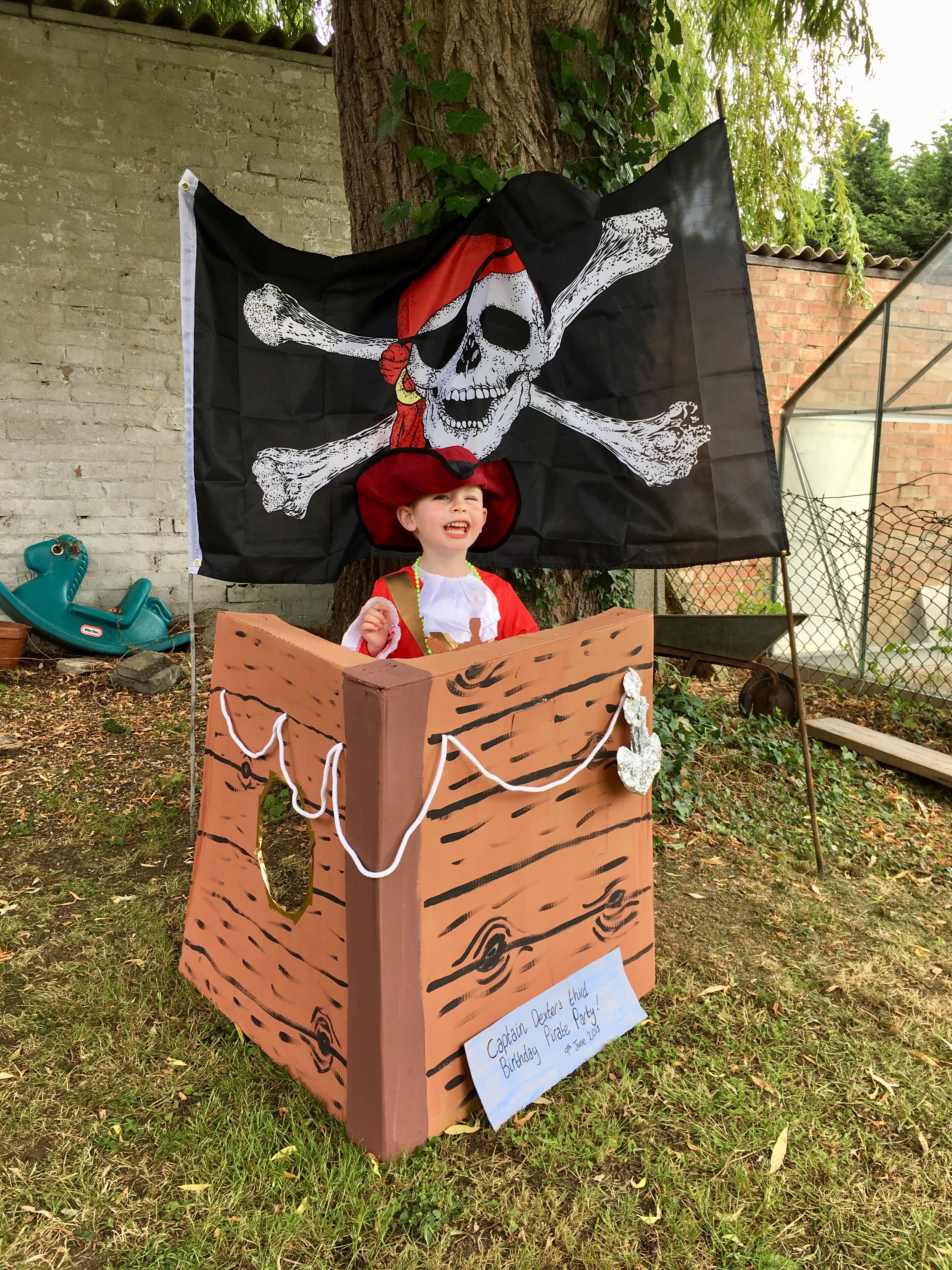 I am very much about ease and convenience when it comes to party food! We therefore had pretty much everything ordered and pre-made. However, I wanted to add some quirky little pirate touches, and as such I bought some little toothpick pirate flags to stick into the sandwiches, which looked rather cute! 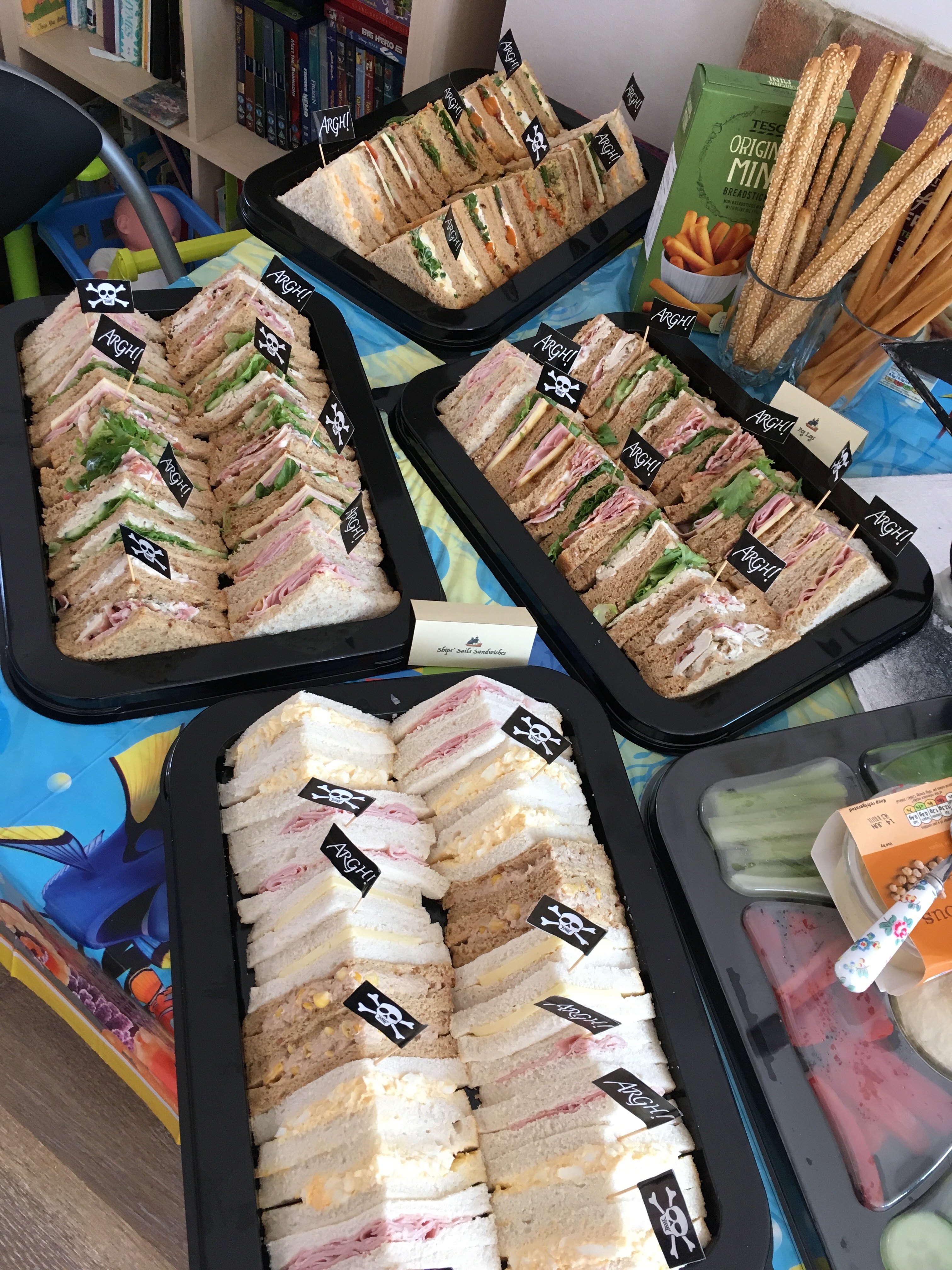 I also made some signs to accompany the food, all of which had vague pirate themes, such as ‘beach balls’ (Babybel cheeses), Ships’ Sail Sandwiches, Sausage Rocks (sausage rolls), Fruity Booty for the fruit platter, Crudite Planks, etc! (I amuse myself, if no one else!!) 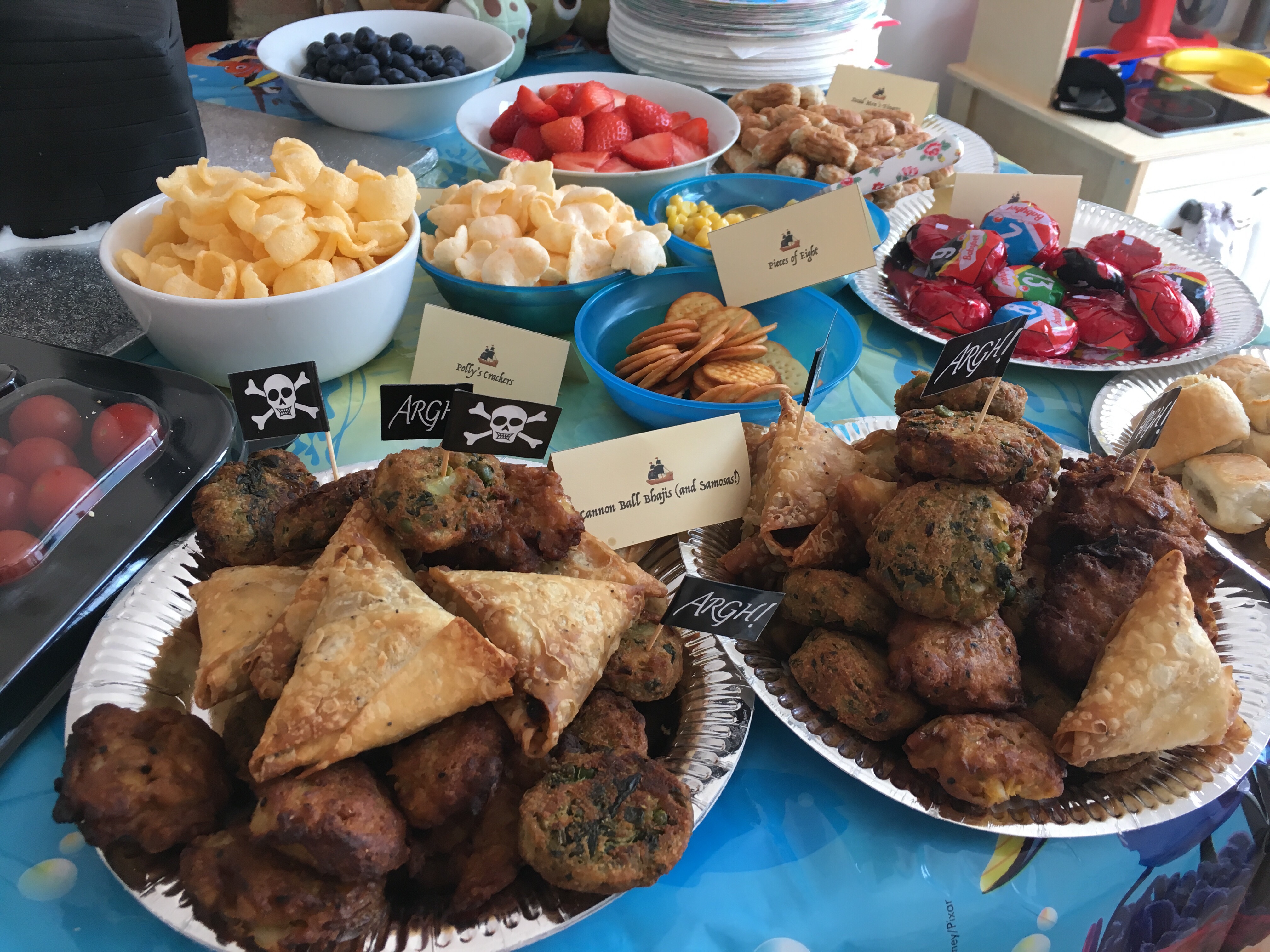 The fabulous cake was made by my father-in-law, and was perfectly in theme with the party, as it was a large pirates’ galleon. 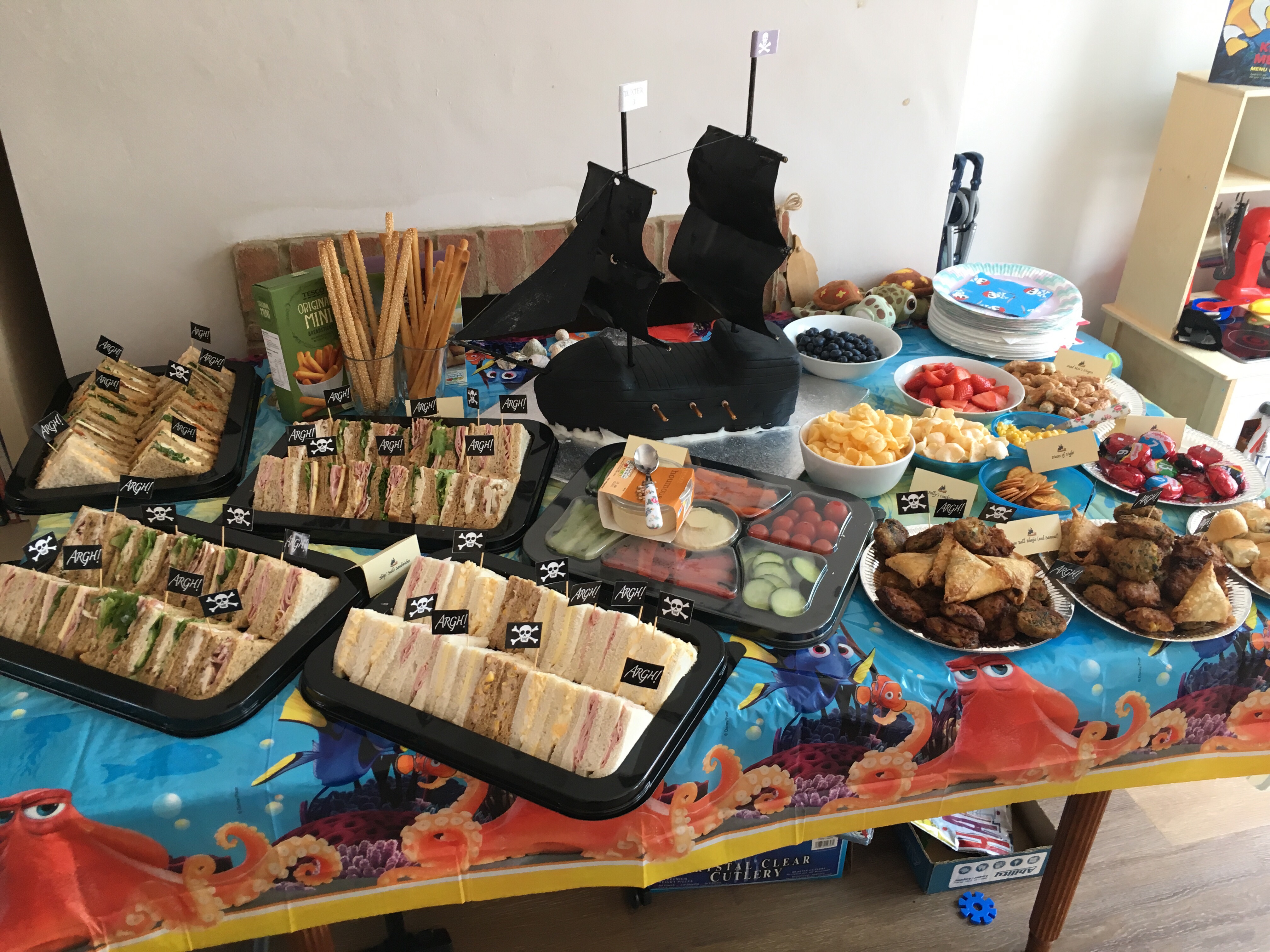 We knew that we wanted to do a treasure hunt as the main activity at Baby Lighty’s pirate party, but this was going to be at the end of the party. We decided that the treasure found as part of the hunt would form the basis of their party bags, and we actually gave the party bags and treasure hunt ‘equipment’ out at the start of the party, to be saved for later. I set up a table on arrival with a named party bag each, a compass, a treasure map and s telescope. The treasure maps and telescopes had been hand made by myself, Mr Lighty and Baby Lighty. It’s amazing what you can do with some kitchen rolls and paints!! 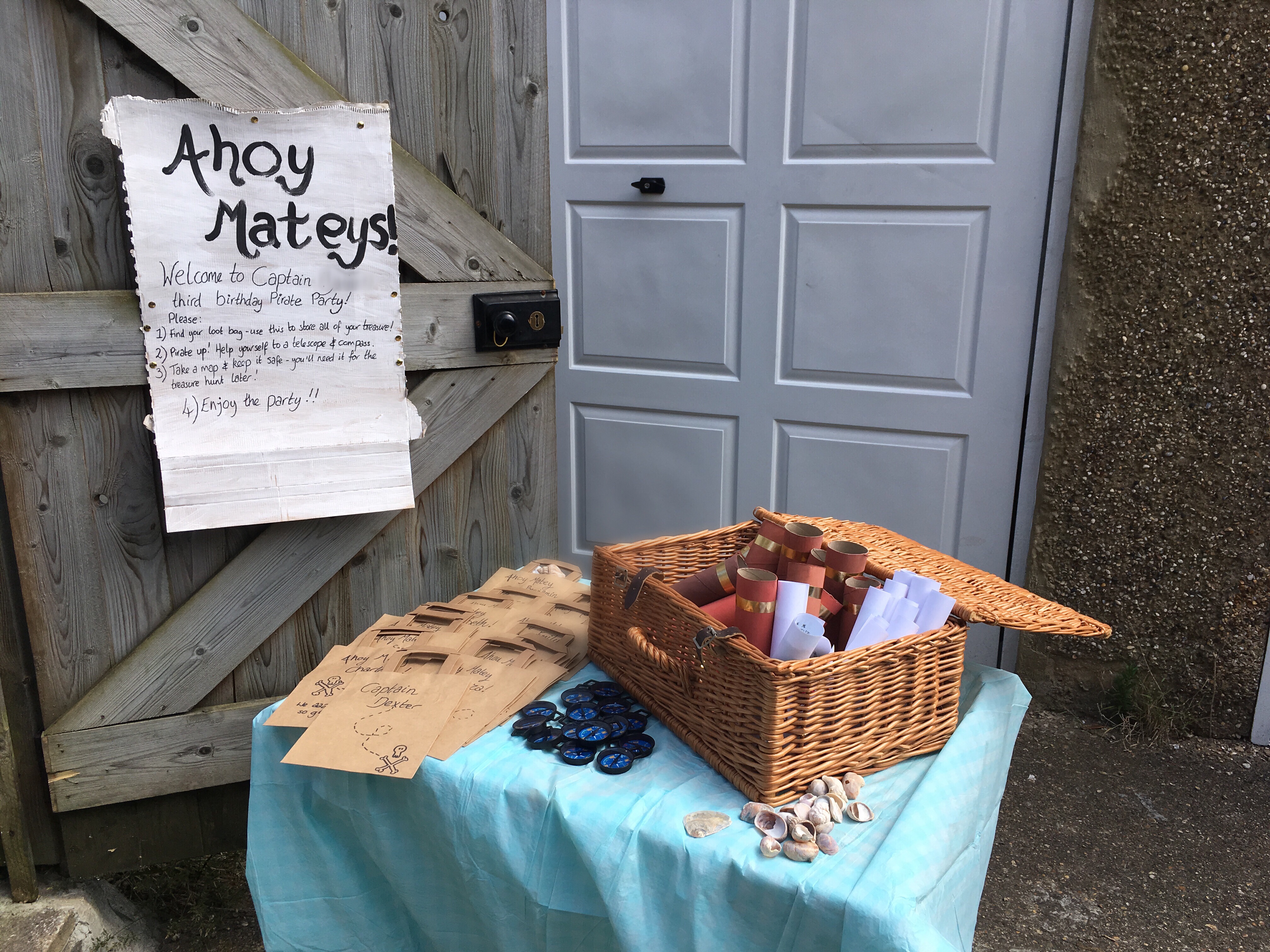 Our welcome table! Personalised loot bags, telescopes, compasses and treasure maps to be picked up on arrival.

For the first hour, we had free play. This included a ‘Treasure Dig’, whereby I buried plastic coins, plastic necklaces and shells in a tub of sand and let the kiddies loose with spades and rakes. Part of the reason for giving out the party bags up front was so that they could keep their loot from this safe in their bags. 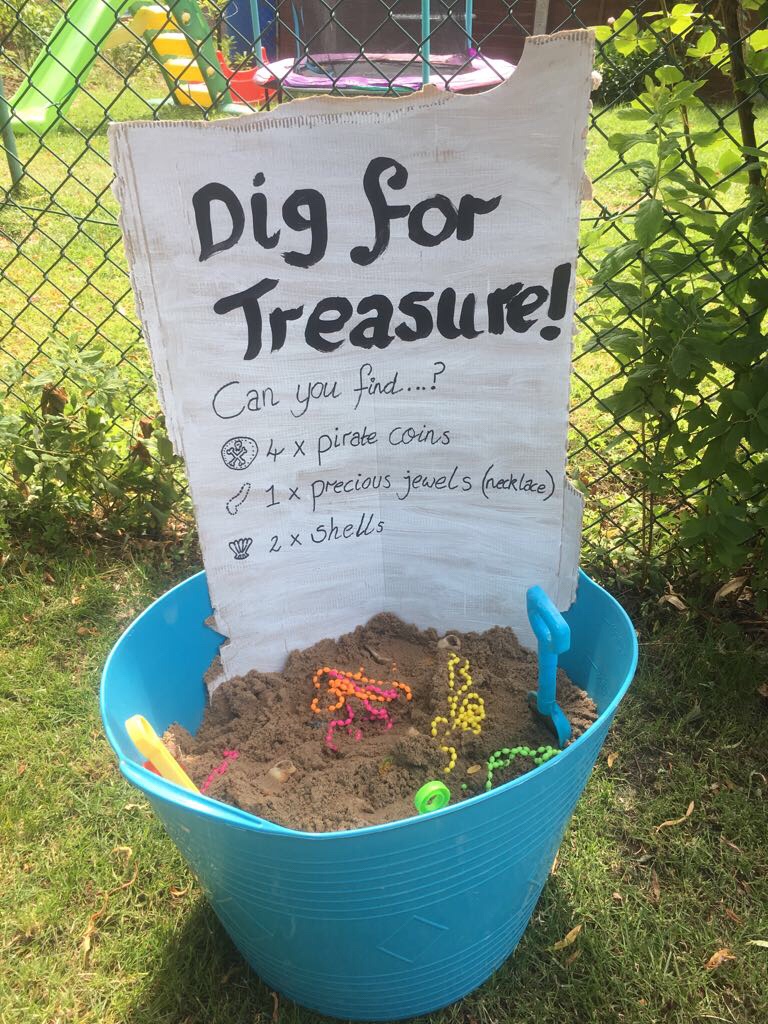 We also had a ‘walk the plank’, which was literally just a sheet of blue material (pegged down for safety), a plank of wood, and some inflatable crocodiles I bought from the poundshop! 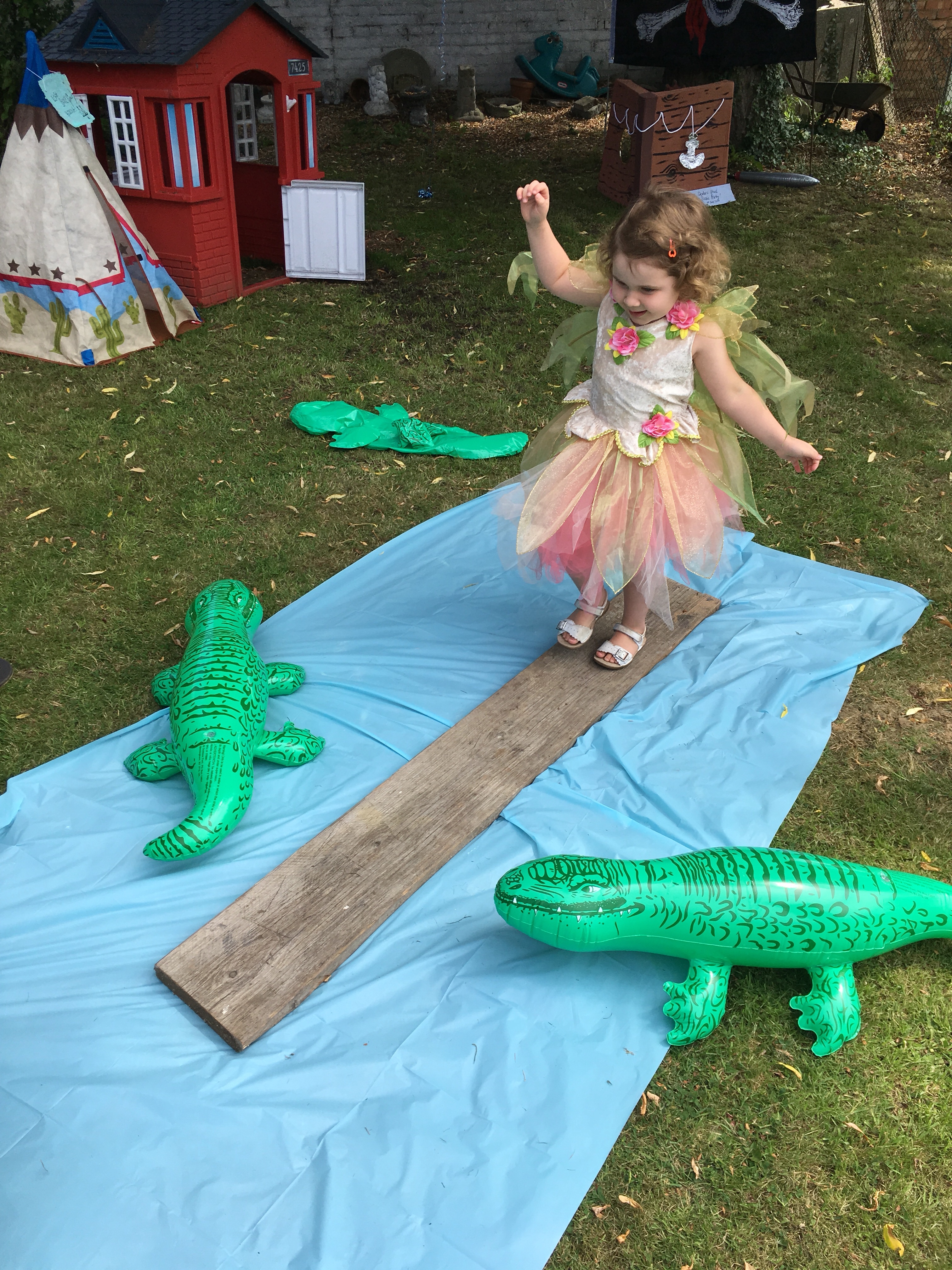 Walking the plank! (Excuse the flat croc in the background, ha!)

There were also bubble ‘swords’ that the children could help themselves to, we had our bubble machine going, the playhouse and tent were the ‘Lost Boys’ and Girls’ Hideout’, Mr Lighty had made a Pirate’s face ball toss, and they had the cardboard ship to play with. 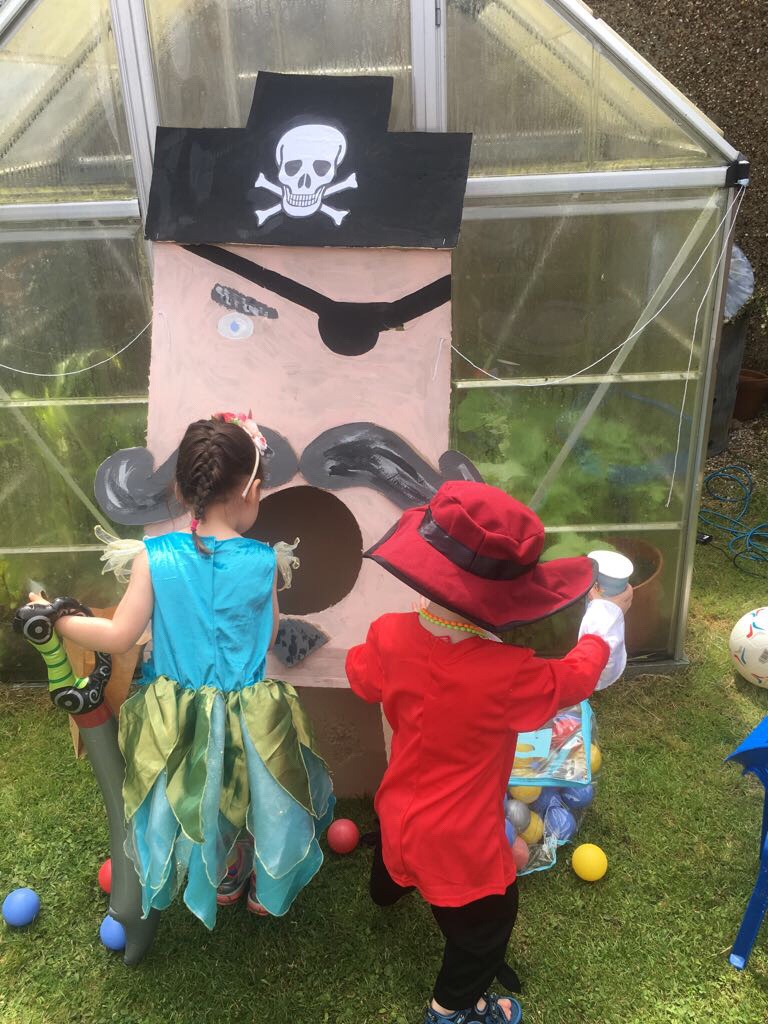 From the outset, we knew that we wanted the treasure hunt to be the main focus of the end of the party, as the loot would form the party bags that the children would take home. As such, we created basic maps out of water colour with fine liner details over the top, then scanned the original into our printer before printing off enough to have one for each child. 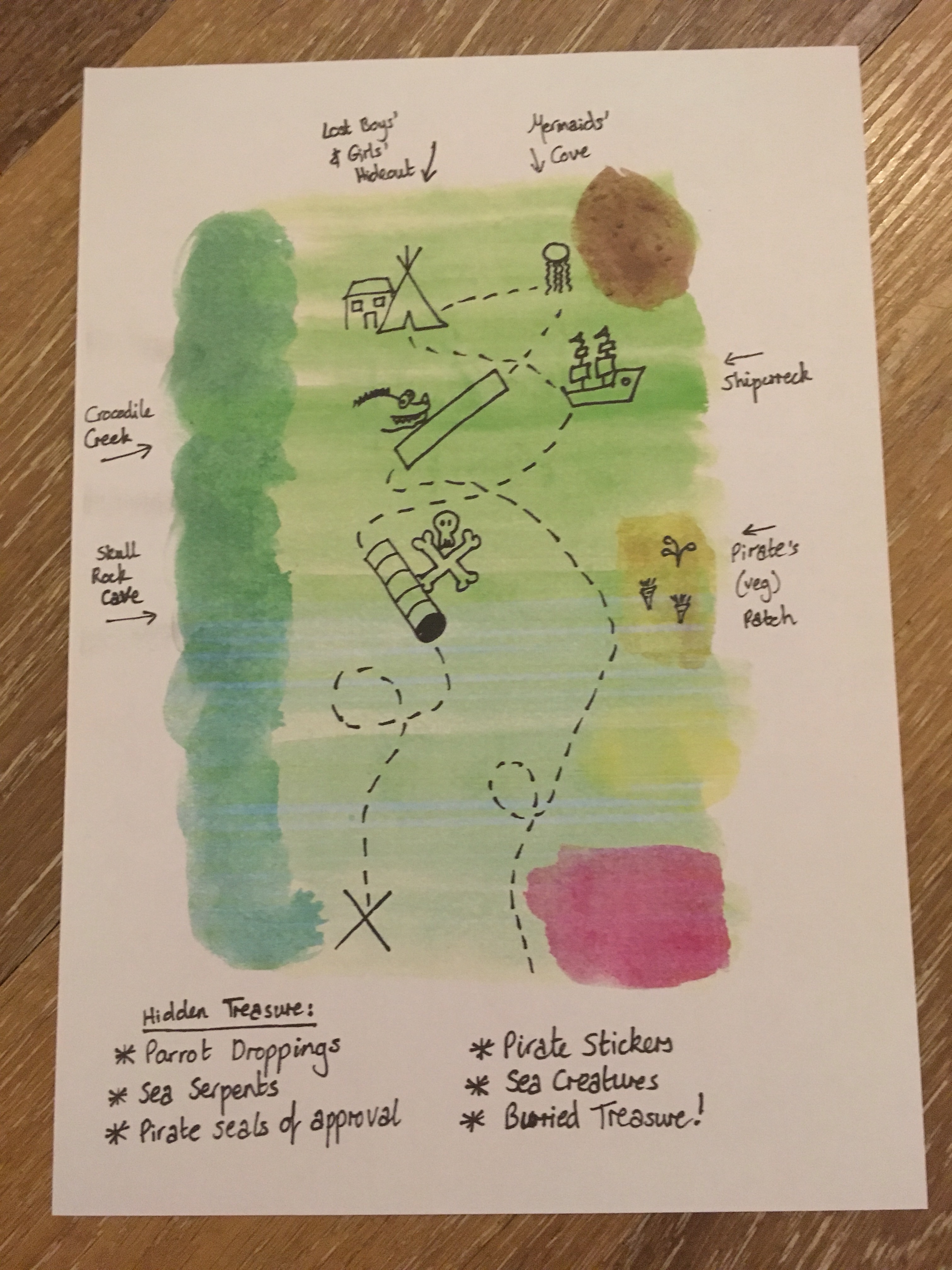 For the party bags, I’d bought brown paper lunch bags and had drawn a map design on each one. I’d then bought the typical party bag type loot for the party, but tried to add a pirate twist to each item. As such, the children were looking for:

The biggest problem we knew we’d have was hiding all of the loot. We knew that if we had free play in the garden beforehand, there was a very good chance that a lot of our loot would be un-buried, as it were, before the treasure hunt started, if we left the kids to it! As such, we decided that when we opened the buffet, we would try to sneak the loot out at that point. This worked relatively well, although some of the older children weren’t so fooled!! A tip if you’re planning a similar party: try to have a large table or somewhere specific for the children to sit at so that you can do the hiding in peace; if you had the party in a hall, for example, it would have been a lot easier than trying to hide around children who are not contained by a specific eating area!!

Once everyone had finished eating, Mr Lighty called all of the children together. He made sure that they had their loot bags, and made them get out their treasure maps and telescopes. With a little air of drama, he then made them all look for the first point on the map, and led them over to find each bit of loot, stopping in between to make them look through their telescopes, walk the plank, crawl through a tunnel etc etc. One of the highlights was when they found the parrot droppings: we’d emptied a box of raisins into a drawstring bag, and once they’d found the (toy) parrot, Mr Lighty preceded to reach into the bag, grab a handful of ‘droppings’ and munch away on them. I think the kids were delighted and disgusted in equal measure!! 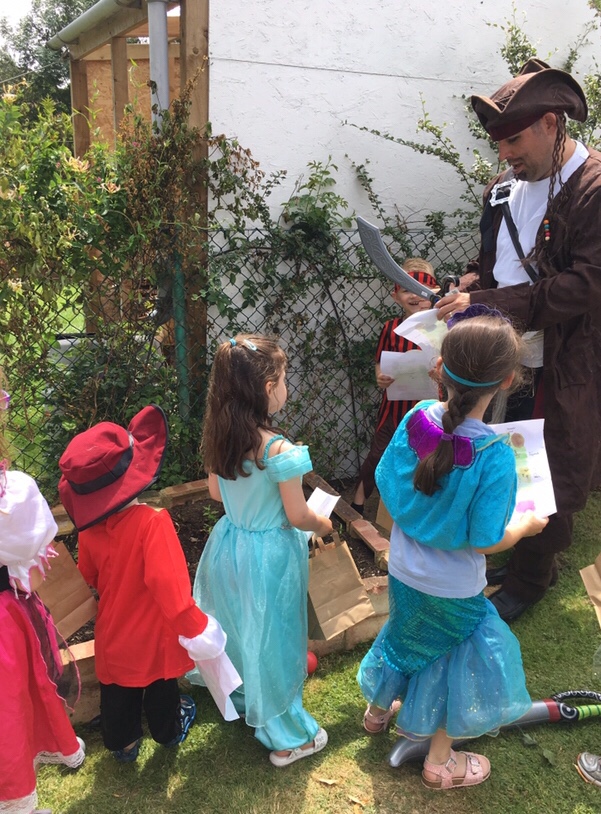 The very last thing they had to find was a treasure box which we’d asked Grandad Hatchy to keep safe throughout the treasure hunt. When they eventually did find it, they opened it up to find a treasure of chocolate coins inside!

And if you ever want to keep 12 two to seven year olds quiet, giving them chocolate coins is the way to go!! As once the treasure had been found, we gathered all of the children together (mostly with the bribe of the aforementioned chocolate coins!) and brought the birthday cake out to sing happy birthday to Baby Lighty.

This year’s party was definitely a lot of fun, but also a lot of hardwork. Being mindful that many of the toddlers still nap in the afternoon, we had the party from 11am to 1pm, and it was hard going setting up before everyone arrived (and a big thank you has to go to one of Baby Lighty’s Godfathers, Mr Ansly for being recruited to set up drinks as he walked through the door!).

But the success of the party has to come down to this one fact: Baby Lighty hasn’t stopped talking about his party since it happened, and has started talking about what he wants for next year.

And that’s got to be the sign of a good party, right?!

All photographs kindly shared with the parents’ permission.