I may have mentioned just once or twice that Mr and Mrs Lighty have a love for Disney. A few years ago, having recently been to Disney World, Florida, and shortly after, Disneyland, California, we were lucky enough to be annual pass holders for Disneyland Paris, meaning that we were able to visit four times in the space of a year, which, let’s face it, was pretty much one of Mrs Lighty’s life ambitions achieved.

However, as with any good fairytale, there always has to be a twist: and for Mrs Lighty, that twist had to be that she was to be with child for half of the visits in that year. 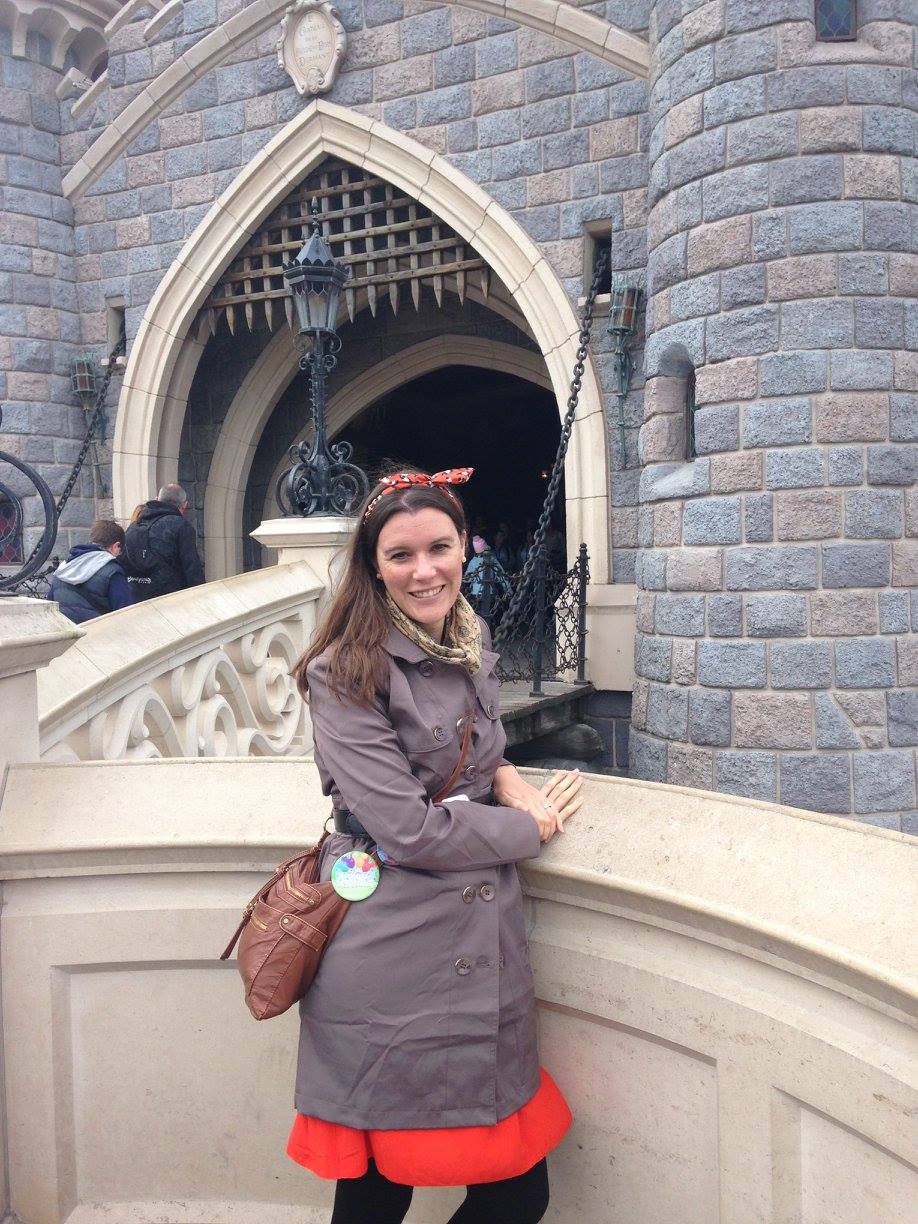 The reason I’m beaming in this photo is not just because I’m in Disneyland…it’s also because we’d literally found out four days before our trip that I was pregnant!

To be honest, I knew when we purchased the annual pass that there was always going to be a chance that at some point during that year I would be pregnant. At least I certainly hoped I would be pregnant during that year! We actually found out that I was pregnant four days before our third trip to Disneyland Paris that year. And it didn’t really bother me too much, as I was so grateful to finally be pregnant that I couldn’t resent the fact that I wasn’t getting the full Disneyland Paris experience.

That said, being preggers does restrict what you can do in the parks. It doesn’t have to dampen your spirit, however; just wave your magic wand over your trip, think outside the box, and you’ll have just as fantastic a Disney experience as anyone else.

In case you’re not quite sure where to focus that magic wand, here are Mrs Lighty’s top tips for surviving Disneyland whilst pregnant.

In a way, I think having struggled to fall pregnant with Baby Lighty stood Mrs Lighty in good stead. Apart from the fact that throughout a relatively difficult pregnancy it still made me grateful to be pregnant at all, it also meant that I didn’t ever feel like I was ‘missing out’. I certainly wasn’t worried about the rides that I couldn’t go on whilst pregnant, even though I’m normally a huge fan of the Rock ‘n’ Rollercoaster and Space Mountain (it’s true! Many of Mrs Lighty’s friends wouldn’t believe that I like the big rides I’m sure, but it’s honestly true!).

Instead, I focused on the rides that I could go on, such as the annoyingly catchy It’s a Small World, Buzz Lightyear’s Astro Blasters and the Haunted Mansion. Indeed, during one visit, Mr and Mrs Lighty went on the Haunted Mansion ride so many times that we started reciting the words whilst riding – “a ravishing bride, a vanishing groom!”!!

There are also plenty of shows that you can rest your weary pregnant legs at. There’s everything from the car stunt show through to Animagic, although I think Mrs Lighty’s favourite whilst pregnant was Stitch Live, mostly because Mr Lighty got picked on by Stitch to be blamed for the mischief that he got up to!

2) Snack Attack
One piece of advice I’d give a pregnant woman in general, not just one visiting one of the Disney parks, is to make sure that you’ve got plenty of snacks with you at all times. If you’re feeling sick / ravenous / faint* (*delete as applicable), you’ll always have something to boost your energy. The queues for food in the park can be long, or alternatively you may get stuck in a queue for a ride or a show, and so it may be a while before you can get your pregnant mitts on some grub.

Similarly, you may want to go armed with some basic French if you’re visiting Disneyland Paris, to explain to staff that you’re pregnant. There was much gesturing Bridget-Jones-style when we were trying to explain to the waiter in The Rainforest Cafe why I’d sent the undercooked ribs back. “Je suis – possibly – avec bébé!”

3) Be Prepared for – erm – all Eventualities

Perhaps the less said about the 3 hour drive home from Paris to our Eurotunnel train at Calais when an 11 weeks’ pregnant Mrs Lighty couldn’t go longer than 5 minutes without throwing up into a plastic bag, the better, eh?! Make sure you are prepared for ALL eventualities!!

One of the biggest parts of the magic for Mrs Lighty is meeting the Disney characters. Yes, yes, I know, I’m far too old for this really, but I still love it. One of the advantages of being pregnant at Disney is the fact that you can actively look for things to do which don’t involve thrill-seeking rides (see point 1), and therefore there’s more time for meet and greets with the characters. We were lucky enough to go at Halloween when I was 4 weeks pregnant, and then again when I was 11 weeks pregnant, when the park had been changed over for Christmas. This meant that the characters were out in full force on both visits, and we had plenty of time to queue for photographs as we weren’t queuing for the big rides.

Mrs Lighty was 4 weeks pregnant when we met Buzz!

And Mrs Lighty was 11 weeks pregnant when we met Mickey and Minnie at Christmas!

Assuming you’re not going to Disney by yourself (which may be a little bit lonely, even if this is the happiest place on earth!), if you’re pregnant, there are bound to be times when you’ll have to wait around for other members of your party to get off of rides. Don’t let this get you down, however; remember that many of the major rides have fastpass tickets available so encourage the rest of your party to use those wherever possible, and then use the wait time wisely.

I found that I tended to use this time either to go and photograph certain aspects of the parks that you might not get round to as part of a crowd, and also to photograph family members on the rides themselves where this is a possiblity.

You may also get to see things that the rest of your party miss: Mrs Lighty is still very chuffed with herself for having seen the talking trash can on our last visit to Disneyland Paris whilst waiting for Mr Lighty and Daddy Hatchy to get off of the Rock ‘n’ Rollercoaster as this was recently listed in Buzzfeed’s 29 Things you’ll Never See at Walt Disney World Again!

Ah well. I guess we’ll just have to make another trip back now that Baby Lighty is here so that Mrs Lighty can experience the shopping – and not being pregnant whilst at Disneyland – properly!

18 thoughts on “How to Survive Disneyland when Pregnant”