It’s a fact of parenthood that just as you start to rest on your laurels, something comes along to shake things up. Touch wood, we’ve been in a pretty good bedtime routine with Baby Lighty for a while now. We’d do the whole bath, book, bed, with milk during story time before switching to the dummy for bedtime. Ah yes, the dummy. Or the nummy, as Baby Lighty calls it. Therein lies the thing that’s shaking our parenting core! Therein lies the thing that may well make us admit defeat!

We only ever introduced the dummy because we were told by the midwives when Mrs Lighty was breastfeeding that it would help to settle our constant feeder. Had I known then what a big old breastfeeding failure I’d be, I may not have introduced it. And now, two years on, I feel like it’s one of the big three we’ve got to tackle:

Is the dummy the lesser of three evils?! Who knows?

Anyway, we decided to start with the dummy. Whether this was wise remains to be seen. We’d started to talk to Baby Lighty about ditching the dummy and were always met with, shall we say, *some* resistance. In other words, a complete meltdown! When we suggested that the dummy was needed by new babies, Baby Lighty’s response was “Nooooo baby, my nummy!” Ok then, we’ll take that as a no then, shall we?!

We also suggested that, should he be able to give the dummy up, he could have a new toy of some description. That went a little something like this:

“If you don’t have the dummy, you could have a new car!”

“Something for the garden?”

“Something when we go to see The Wiggles?”

So what was there to do but go cold turkey? 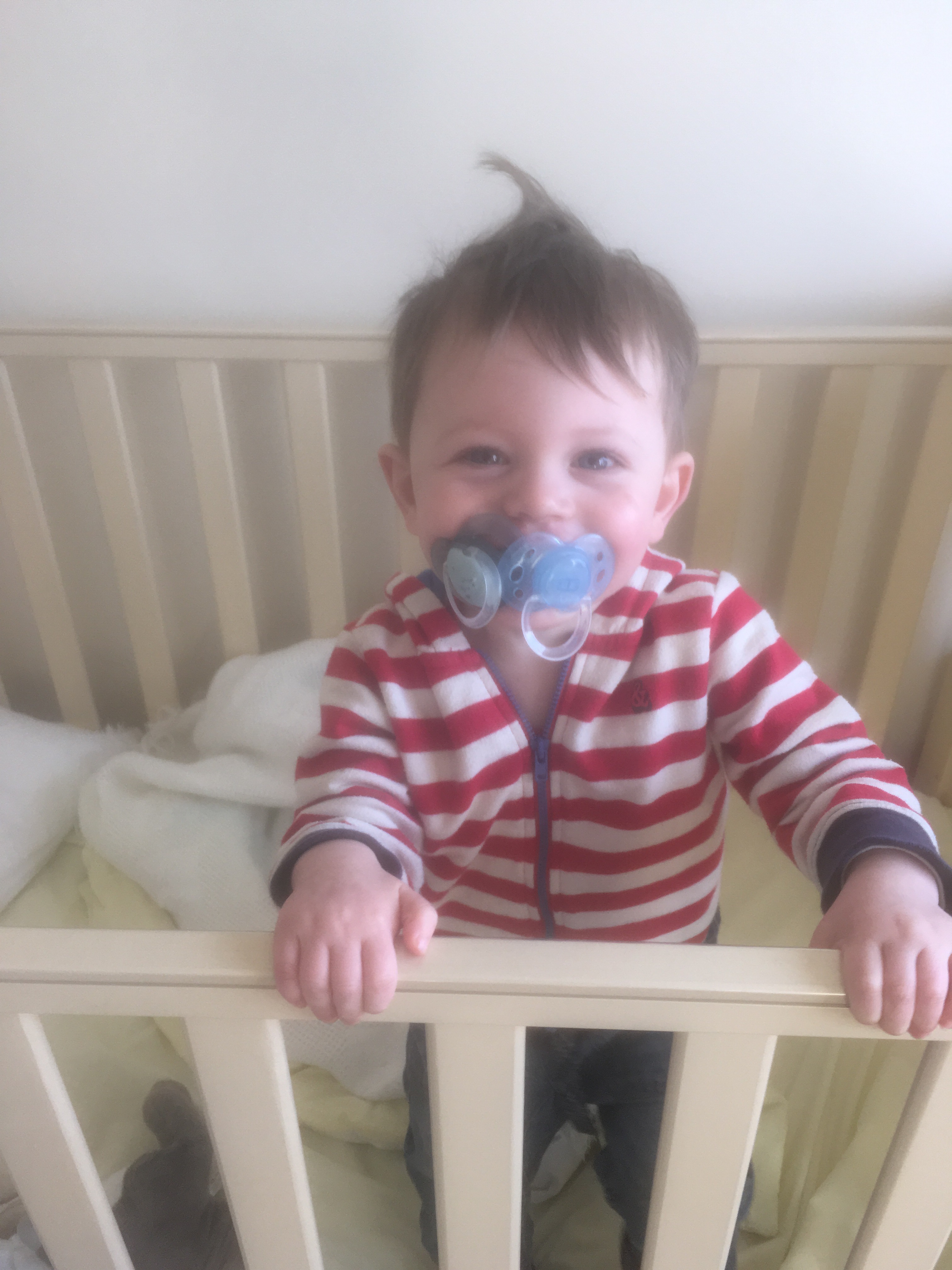 Two dummies at once…this is how much the child loves his ‘nummy’! Help!!

This was all very well and good. But would our nerves stand up to cold turkey? Would we crumble under the weight of toddler torture? Well, the first night, we did exactly that. It absolutely broke my heart to hear my usually pretty happy Baby Lighty crying for his nummy. The bit that really got me was when I sat by his cot and Baby Lighty reached out to stroke my face, before pulling our foreheads together in a strange sort of cuddle. It was clear that he needed the comfort of the dummy, and I did what any mother intent on peace would do: admit defeat and give in.

The second night, however, we’d been at Nanny and Grandad Hatchy’s for dinner. We got home late, and Baby Lighty was pretty tired. So we put him to bed without his dummy. He drank his milk, shouted out that it was all gone, and miraculously, went to sleep!

“Well, that was all too easy,” we thought, “surely we haven’t spent the past two years worrying about the dummy for that to happen?!” Now if only that were the end of the tale, dear reader. If only. Pride comes before a fall, and all that.

The next night, The Child mucked around in his cot for an hour and a half. AN HOUR AND A SODDING HALF. An hour and a half before he eventually gave in and fell to sleep. I think we heard about 17 rounds of “Crinkle, Crinkle, Little Star” in that space of time, too. And the next three nights weren’t much better either. What had we done?! We’d created a dummy devil of a monster!

This continued for the next ten nights or so. Each night, it took about 45 minutes before he would settle down. He wasn’t crying; he was just mucking around. Then we had two good nights: two nights where he just fell asleep without any bother, and we thought we’d cracked it.

Except we hadn’t bargained for the fact that the next night, he’d see our niece with hers. And that he’d start asking for his again. And even up until this point, we hadn’t quite managed to ditch it for nap times. I must admit, I felt completely conflicted by the whole situation. I think one of my friends summed it up best when she said that when they’d been through the same with their little boy, she felt guilty for giving him something that was convenient to her at the time, and then guilty for taking it away when it was convenient to her.

That night, after Baby Lighty had repeatedly questioned where his nummy was if his cousin still had hers, he became quite distressed at bedtime. There was nothing that Mr Lighty and I could do but admit defeat and give in.

We’ve always been relatively baby led with our parenting approach, with everything from weaning through to playtime, and it felt a bit alien to me to be honest to suddenly be trying to bend him to our will. When I was a brand new Mum, a very lovely online friend of mine said to me to ‘pick your battles’. This has always stuck with me, and when I turned to one of my online mum groups for advice on this front, that was pretty much the prevailing message from this same friend and the other wise ladies that form the group.

Their advice was to be led by him and maybe try again in a few months time, closer to Christmas, when he’ll be two and a half and we can maybe try the Dummy Fairy approach. It’ll be almost Christmas at that point, so it could even be that our Elf on the Shelf brings a present in return for taking the dummy away (although I do need to think about that, as I don’t want Mr Elf to forever be regarded as the Elf that stole Christmas!). It makes sense. But why is it so hard to admit defeat?!

Well I suppose part of it is because Mr and Mrs Lighty are two of the most stubborn people you’ll meet in your life. Ever. We can also be quite determined. And Baby Lighty has definitely inherited this streak from us too…twice over!! But I guess more than that, it comes back to the fact that as parents, parenthood is ever changing. It’s ever evolving, and we don’t always know what to do for the best. But in this case, and as we may well find in points two and three outlined above, we may well need to admit defeat, regroup and try again.

After all, if at first you don’t succeed…wait six months and get Mr Elf to do the work for you?!

Leave a Reply to Abi - Something About Baby Cancel reply