As we approached Baby Lighty’s second birthday, and thought about throwing him a party (even though we said that we wouldn’t) we started to talk about birthday themes. We talked about a teddy bear’s picnic, maybe something to do with one of his favourite programmes or similar. But actually, the more we thought about it, the more we decided to keep it fairly simple and do something that we thought he’d love. And Baby Lighty loves to dance! We have to watch The Wiggles on repeat about 30,000 times a day so that he can have a boogie (yes I am word perfect on Toot, Toot, Chugga, Chugga, Big Red Car!). So why not just let him have a little dance around? And that’s when the idea of throwing him a mini disco was born.

Obviously, this presented something of a challenge for Mrs Lighty: we wanted to keep the costs and the excess down this year, but once I have chosen a theme for a party, I do feel the need to completely commit to it and properly see it through! It wasn’t just going to be the case of sticking on a few party tunes, and that was it. No, if we were going to throw a disco, it needed to look like a disco! And so this is how we set about creating a toddler disco:

We started our party planning on Pinterest of course. There are some fab ideas on there, but maybe not that many that are suitable for a toddler disco. We needed to keep it simple, but I still wanted it to look like a disco. Quite why this bothered me so much, considering two year olds don’t know what a disco looks like, I don’t know. But anyway, this therefore gave me the idea for the Lino. “The Lino?!”, I hear you cry! Yep, the Lino: we went to our local independent carpet shop and bought an offcut of black and white Lino. This was to form our dancefloor. A little hint or tip if you’re hosting your disco outdoors: buy garden hooks from your local hardware store and pin the corners down. This will prevent it from blowing away and / or anyone tripping on the edges. 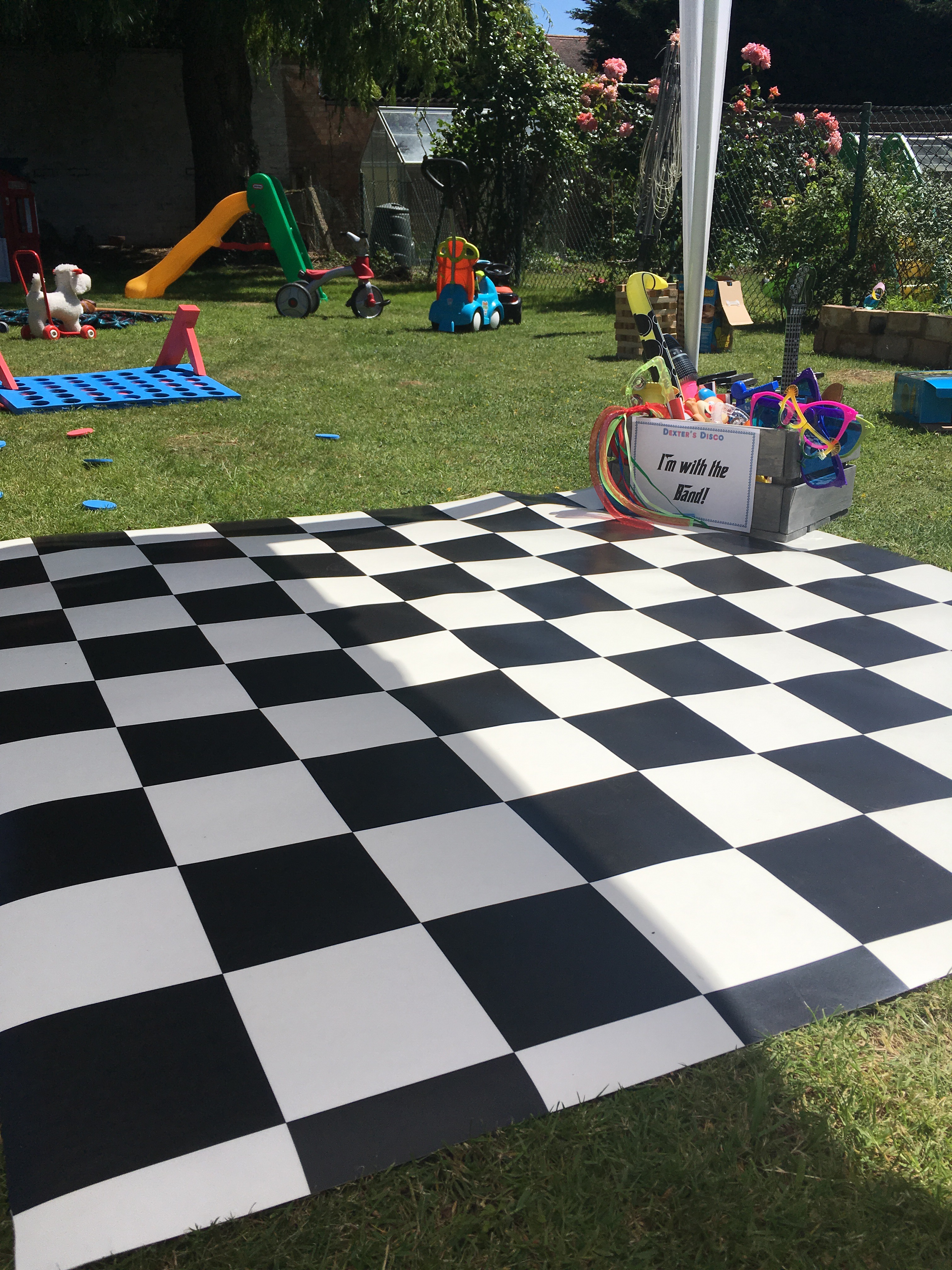 The rest of the décor I kept quite simple: silver sparkly bunting around the edge of the marquee that we bought for Baby Lighty’s first birthday, and I also managed to buy some disco balls in Poundland which I hung from the marquee roof. And of course there had to be balloons too! 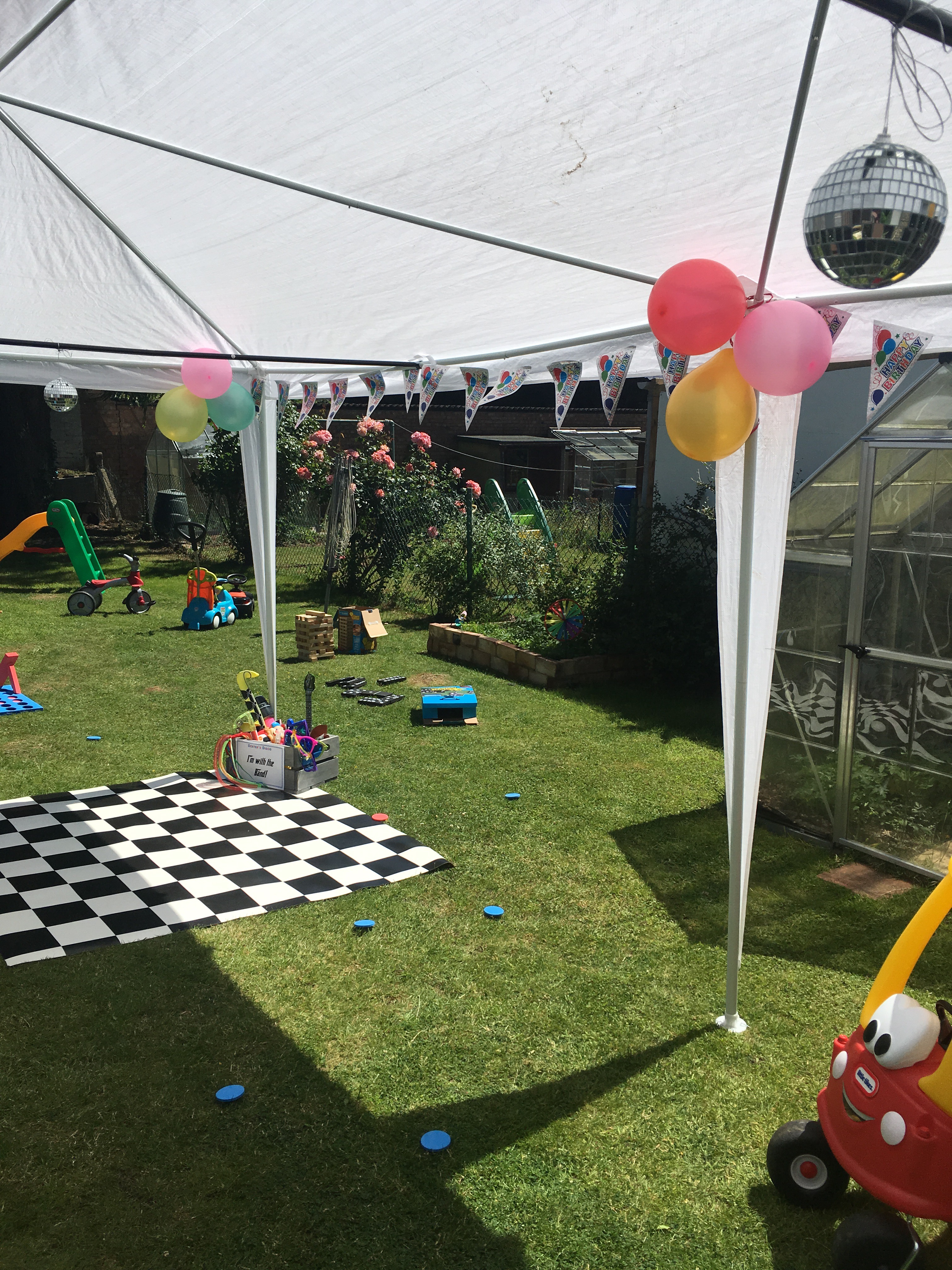 The marquee set up.

In some ways, it was actually quite hard to create a playlist for two year olds. They’re not into pop music at this stage, and yet nursery rhymes can be quite difficult to dance to! We therefore turned to our trusty Wiggles for a big portion of the playlist. I signed up for a Spotify Premium account to allow us to create a playlist. We added plenty of Wiggles songs and their versions of nursery rhymes (which are a bit more upbeat), as well as the likes of the Frozen soundtrack, a few pop songs that we felt they would recognise, and traditional ‘mini disco’ type songs, such as Black Lace’s Superman and Agadoo.

Of course, you can mix things up a bit, and the likes of the Frozen soundtrack can be interchanged with other kiddie film soundtracks. Suggestions that we had included Moana and Trolls! If you’re looking for ideas for your own playlist, you can find a copy of our full playlist here.

As part of the whole ‘not going overboard this year’ thing, I decided I wouldn’t do traditional party bags. But, you know, Mrs Lighty needed to commit to her theme. So where did this leave me?! Well instead of traditional party bags, I decided to buy echo microphones and use them as the basis of the party bags. These are readily available in poundshops, and are therefore not very expensive. I then bought a pack of star shaped sunglasses from Ebay to give a bit of a rock-star theme to the bags. With a few little additions, each child’s party bag therefore contained: 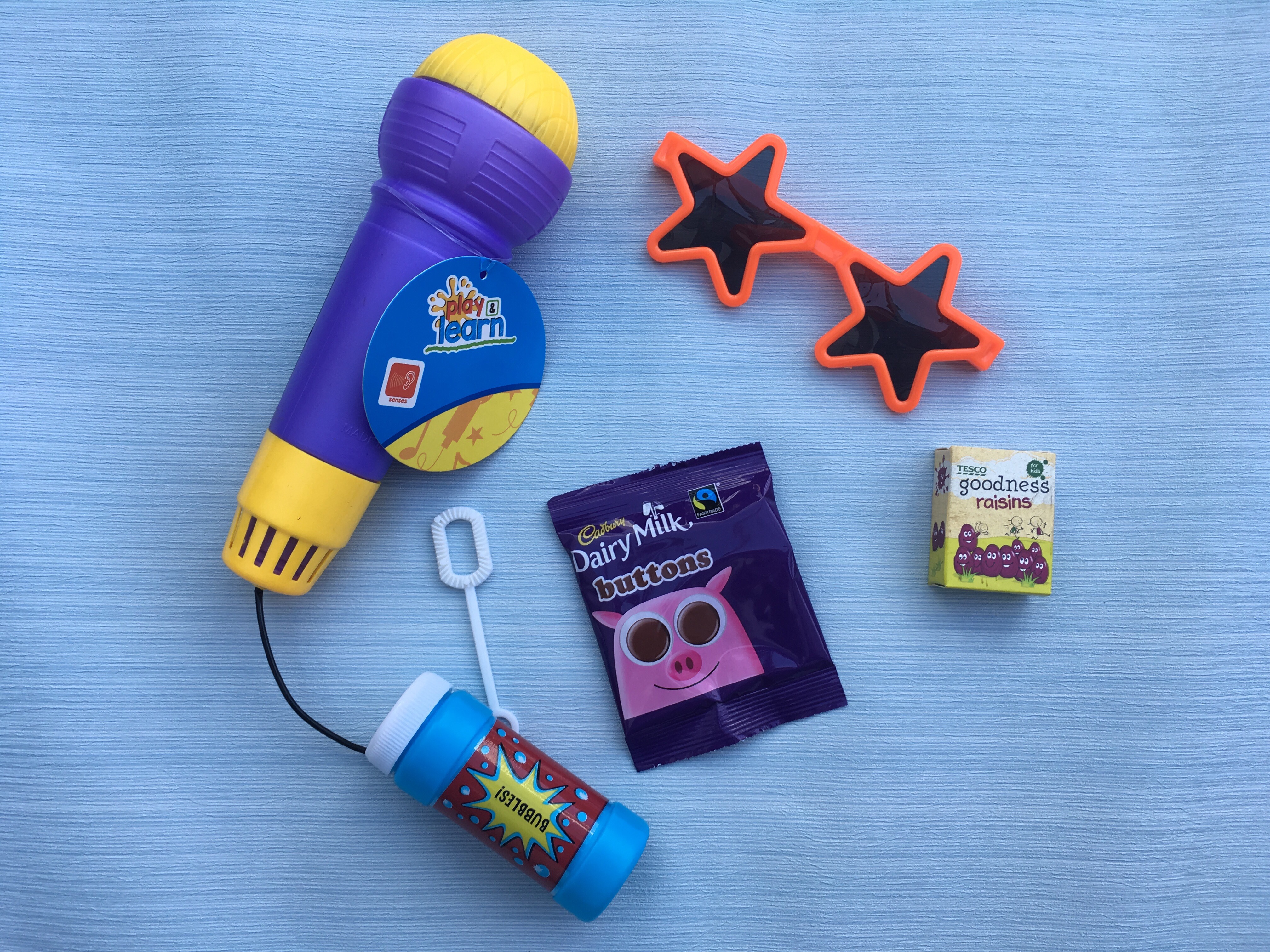 The contents of the party bags.

I wrapped the glasses, bubbles, buttons and raisins in a cellophane bag. They were then attached them to the microphones with an elastic band. I didn’t want to give bags full of sweets and plastic tat, and I hope through this idea I managed to achieve a balance between something fun for the kids yet something cost effective and not too OTT for us to buy and make. 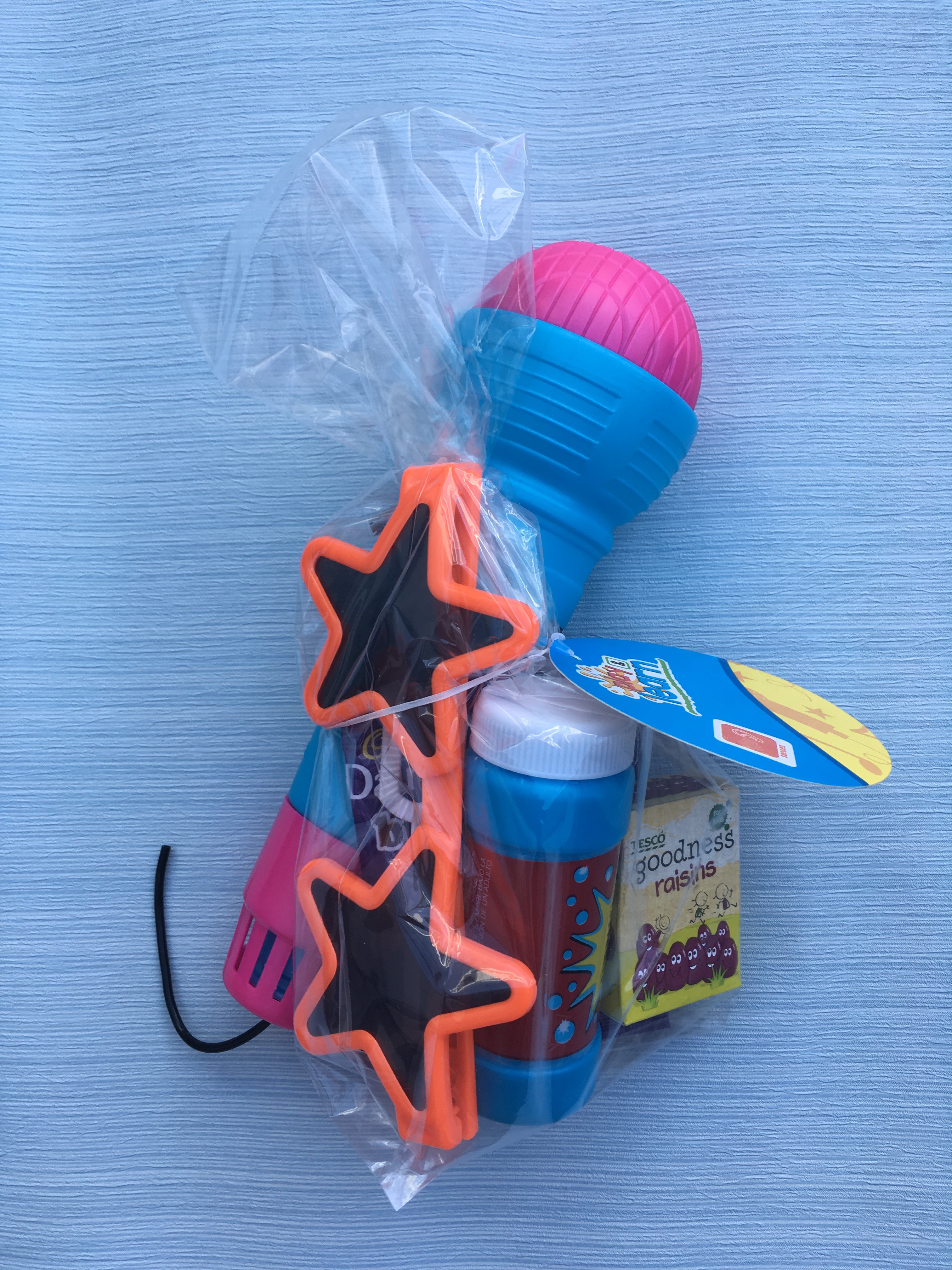 One of the finished party bags!

Of course, this being the Lightys, we were never going to rein it in to the extent of a simple birthday party! A couple of little finishing touches we added to the disco were the likes of a bubble machine. This may sound pretty standard for a toddler birthday party, but we actually bought a professional bubble machine for this occasion to ensure the best of bubbles! We’ve always found that the toy ones don’t perform as well as we’d like. Our toy one tends to foam rather than bubble. So we bought the sort of bubble machine you’d normally find being used by a DJ!

We also made sure that there were plenty of toys and garden games dotted around the garden should the children not be interested in dancing. One of my personal favourite aspects of the day was a box we created full of musical instruments and dressing up accessories. I put a sign on the front to state “I’m with the band!”, and the children could then help themselves and get stuck in with the dancing. I think this went down quite well based on the fact that I kept seeing little people with various instruments in their hands and giant glasses on their faces!! 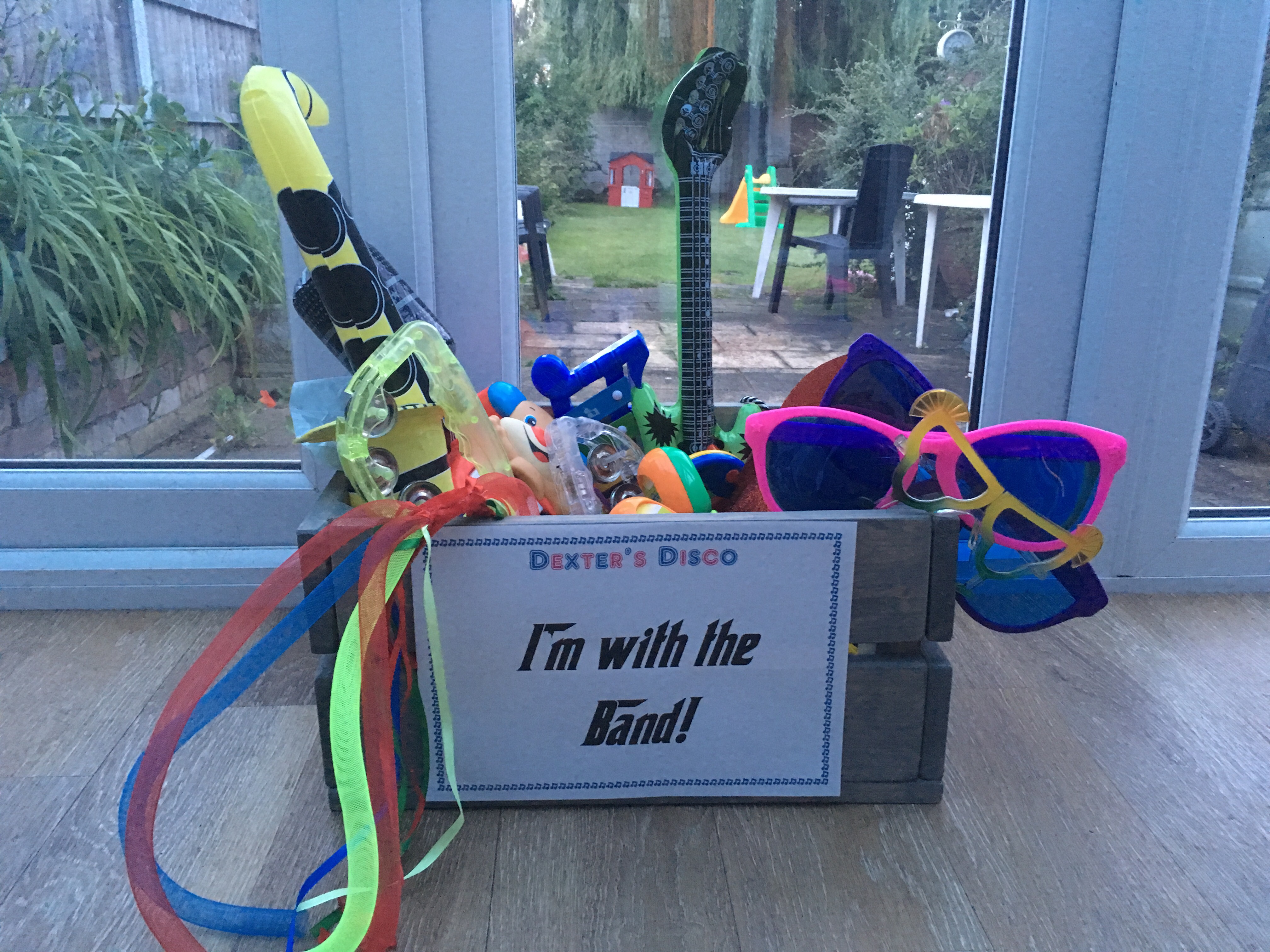 The band box! You can also see it in situ in one of the photos of the dancefloor above. 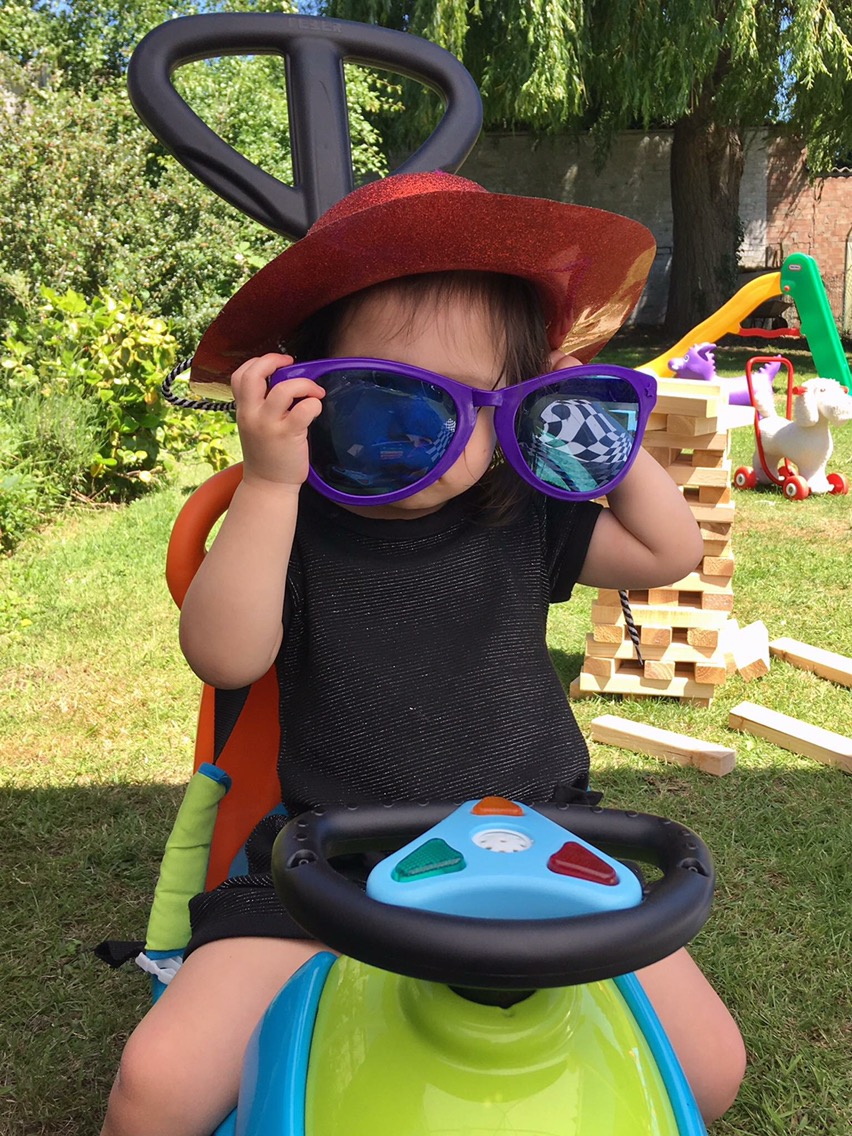 Baby Borgy sporting a hat and glasses from the band box! 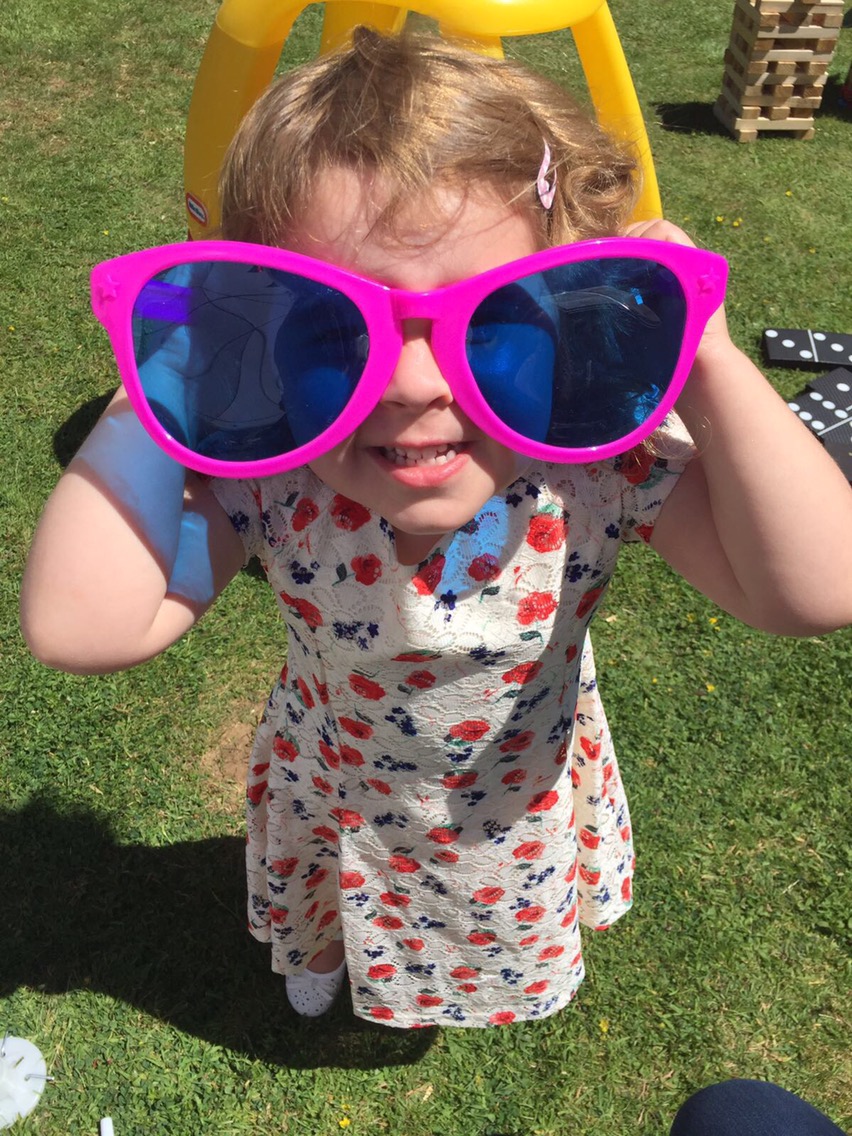 When the Saturday of Baby Lighty’s Disco dawned bright and sunny, I can’t tell you how relieved I was. Baby Lighty’s first birthday party and naming day was a complete and utter washout, and I was dreading the same thing happening on his second birthday, too. Luckily, the weather couldn’t have been better!

Obviously a Lighty party wouldn’t be a Lighty party without a bit of last minute headless chicken action. We were still running around as our guests started arriving. I believe Mr Lighty may even have been setting up the bubbles and music still!! However, our little guests didn’t mind at all and got stuck into throwing themselves down the slide and playing with the toys.

Baby Lighty was mostly concerned with food!! And once we opened up the food table, everyone took to the dancefloor, but used it more as a picnic blanket than an actual dancefloor! 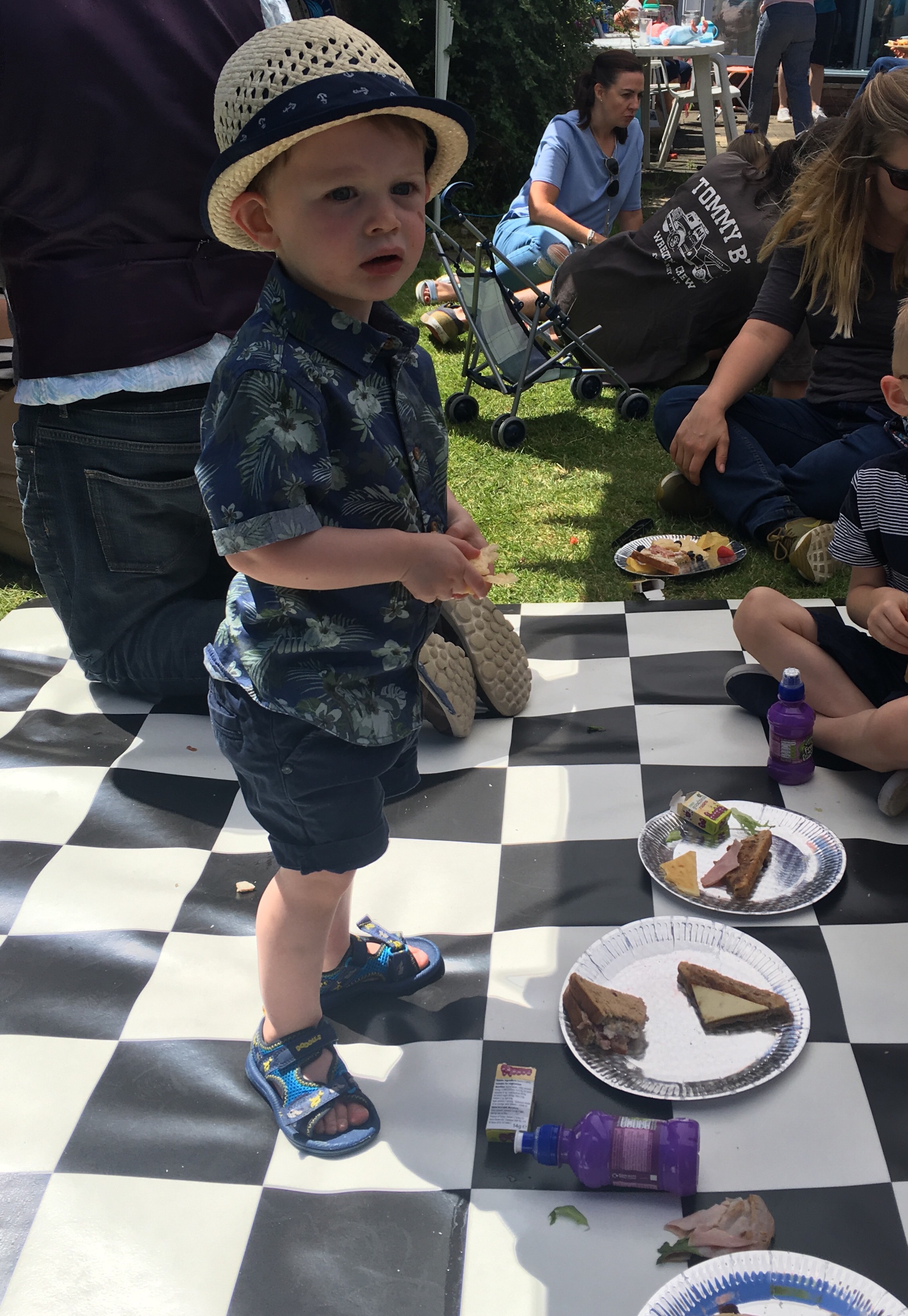 When your dancefloor becomes a picnic mat…

Still, everyone seemed to be having a good time. Baby Lighty got stuck into the dancing with a couple of his little friends and cousins. He also pulled Nanny Hatchy, Great Nanny Kersey, his Godmother and some of his friends’ Mums up to dance too! Grandad Hatchy did not indulge him in his request to “dance!”, however!! It was lovely to see him enjoying himself. He also got quite a few compliments on his moves! 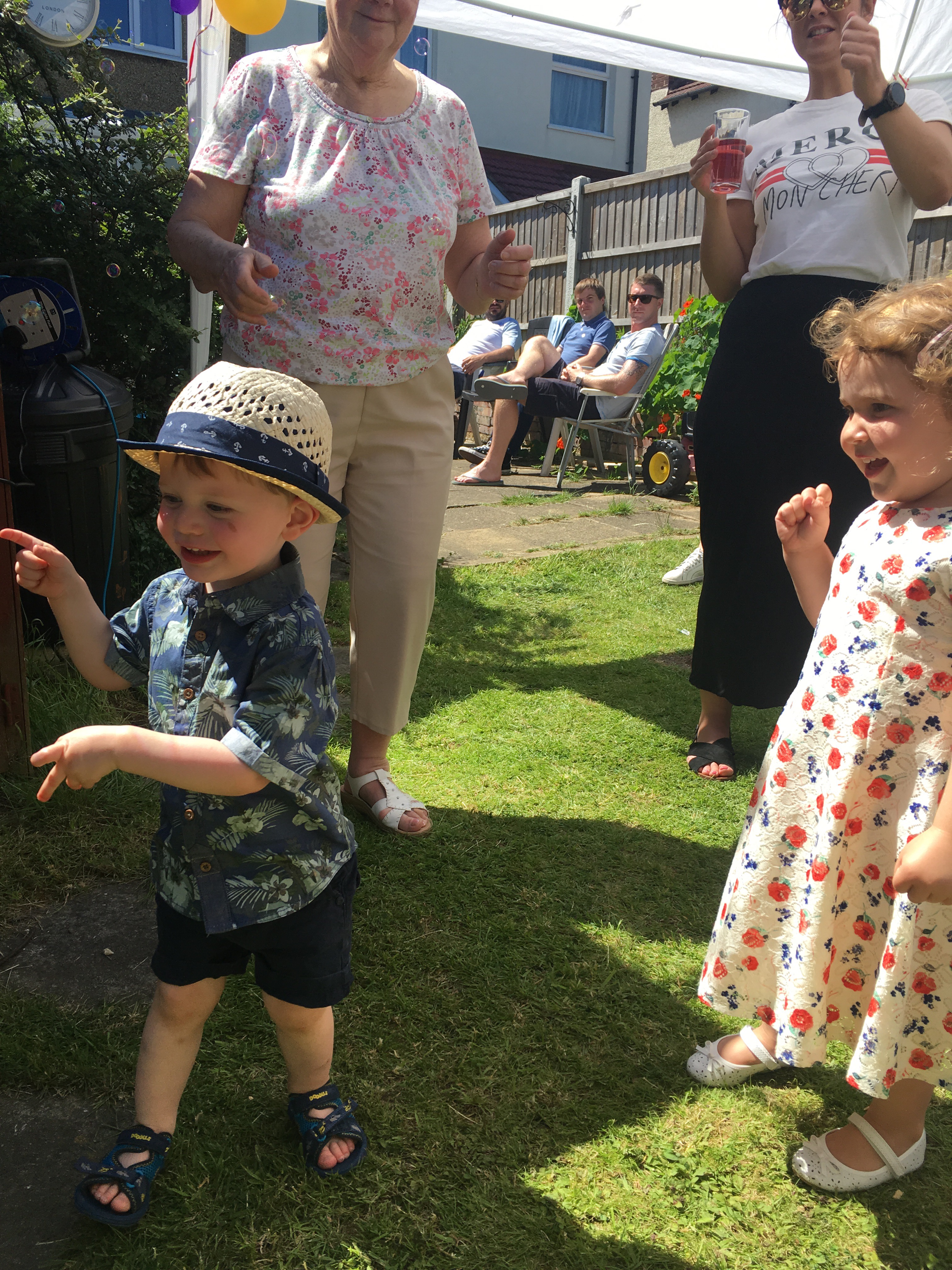 One tip I would give anyone throwing a disco is to have the music close to the dancefloor. As mentioned above, the dancefloor was used more as a picnic area. Similarly, Baby Lighty decided to lead the dancing right by the speakers and the bubble machine to the right of the dancefloor. He didn’t really care whether he was dancing on the grass, a stepping stone or the Lino, let’s face it! 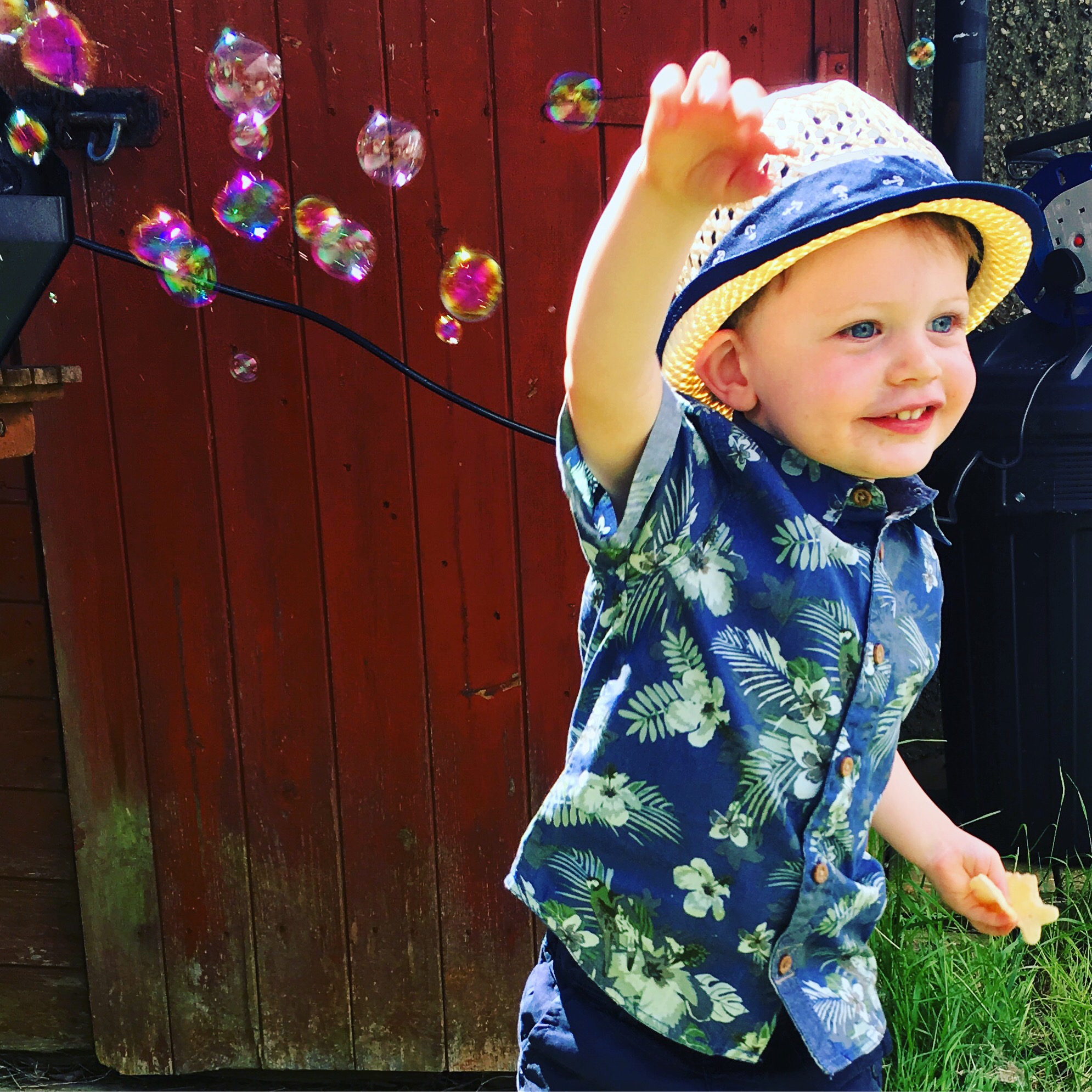 All Baby Lighty really cared about was having fun, and I definitely think that was achieved. Now to decide on the theme for next year’s party…!

7 thoughts on “Disco Dudes: How to Throw a Toddler Disco Party”