Two years old, and the funniest little character I’ve ever met. You love to dance, you love to sing, and your favourite game is performing a song and dance routine for Mummy, Daddy or anyone else that will listen, often accompanied by your guitar. At the end, of course, you take a bow like any good performer would and demand applause. We love your little dance moves, especially the “one shoulder bop”. You make us laugh with your renditions of the Wheels on the Bus, and “Crinkle, Crinkle Little Star”, especially when you tell us that you’re not singing anything else because you’re too busy “crinkling”. It’s amazing how much you can say already, and your speech is something I’m most proud of. At two years old, we’re at a point where we can have a proper mini conversation with you, and it’s just lovely. One of my favourite conversations recently happened when I was putting the washing out and you were pottering around in the garden. After opening the greenhouse door and gasping in delight, you came up to me, took my hand, and asked, “Mummy want look snake?” Apparently you’d found a snake in our garden…! Upon being dragged over to the greenhouse, I found a slug slithering its way across the path, which you insisted on waving at, as well as shouting “hello snake!” at the poor thing!

And just like that, your curiosity has been unleashed.

I should be honest and say you’ve always been a curious child. If there’s a cupboard, you’ll open it. If there’s a noise, you’ll try to find out where it’s coming from. If there’s a new food, you’ll try it. But all of a sudden, at two, that curiosity seems to have taken on a new dimension. I guess it’s because it’s coupled with your speech, and your favourite question is “what do?” 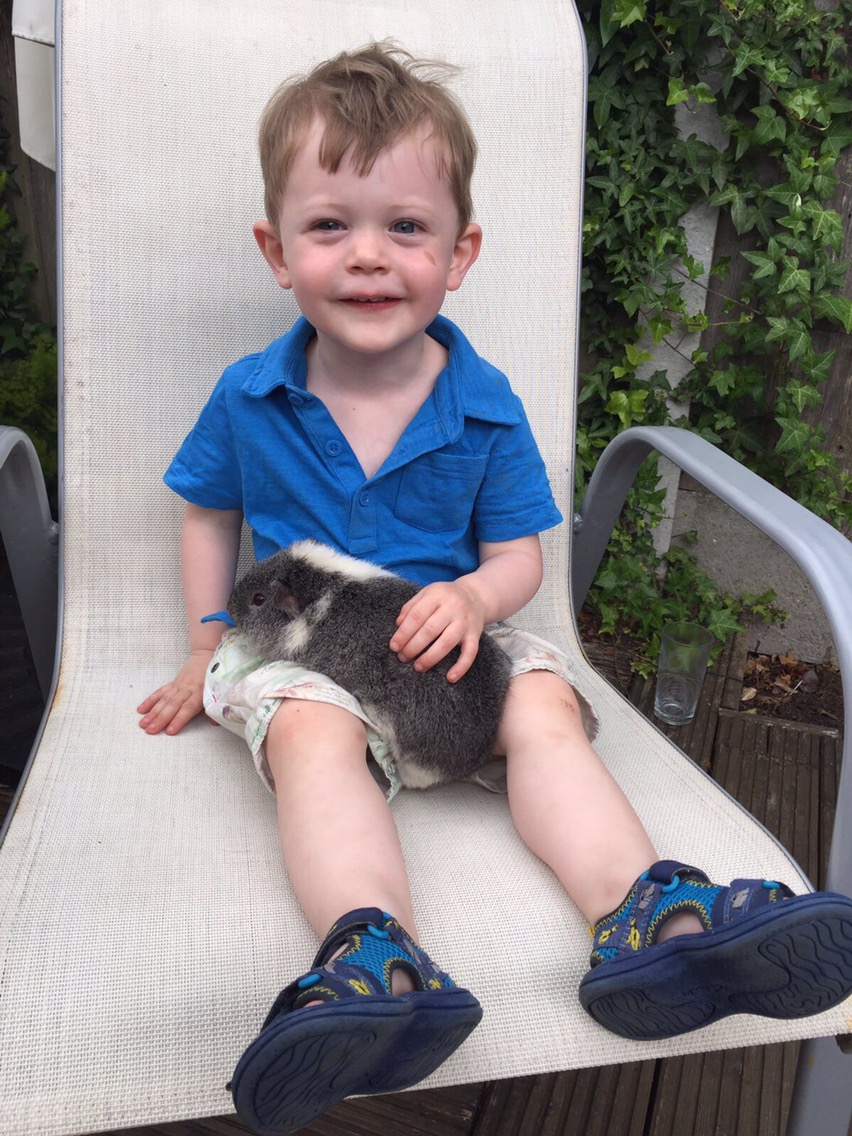 And just like that, you’re a proper little character!

Insisting on wearing your sun hat on a trip to the library in the rain. Having to give a goodbye kiss to a selection of toys when going on an outing. Insisting on taking “Teddy, Rooroo, Doggy and one more Doggy” to bed with you every night. Your imagination has taken off and you already have better acting skills than half the cast of Eastenders. I got told off by Nanny Hatchy for calling you eccentric, but I honestly think you are and that this isn’t a negative. Not only are you a character, but just like that you’re sooooo spirited too.

Depending on the situation depends on whether this is a good thing or bad thing! You’ve given Mummy a heart attack on many an occasion…running off from her in a crowded department store cafe, edging ever closer to the lake at your Auntie’s wedding, climbing on things you shouldn’t be climbing on. But then I also think this spirit fuels your sense of curiosity and fun. It’s heart warming to see you join in with your older cousins, or when you take the hand of one of your little friends to go off exploring. It’s a thin line sometimes for me between wanting to keep you safe and yet not crushing that spirit.

If I ask you if you want any help, I’m almost always met with a crisp, determined little “No!” A phrase I hear all the time – from putting your shoes on to filling your water cup – is “Dedder do it”, as you attempt to say your first name. It’s highly amusing, although getting out of the house now takes even longer still!

Even though you’re so independent, often you still just want Mummy cuddles. It’s true what they say about little boys: they are super affectionate. You’ll often demand a “cuggle” or “lap” if you want to snuggle up on Mummy. Quite often you’ll plant kisses on me too, which is just the nicest thing. Just the other night, you called me into your room as you were “scared”, and I loved tucking you back in tight, making sure you were safe from the world. And just like that, you’re not my baby any more.

It’s true. At two, you don’t feel like a baby any more. You truly feel like a toddler; a child. You’ve lost the majority of your baby ways, and I’m sure that the last few baby traits will be ditched in the next few months. We no longer use the highchair as you want to sit on your booster seat at the table with us, for example. You’ll have a good go at using your knife and fork properly. You sleep with a proper quilt and pillow rather than a GroBag, and I feel like we’re on the cusp of potty training. Even though I found being the mum of a newborn incredibly hard, this still makes me really sad. But just like that, just as you’re now an independent, loving, walking and talking child, and a character in your own right, you’re still my baby deep down. And you always will be.

If you enjoy reading All Things Spliced, I would be completely chuffed if you could nominate Mrs Lighty in the Readers’ Choice category of the BiB Awards! Please click on the badge below and complete the form, my full web address is http://allthingsspliced.co.uk and my Twitter handle is: @MrsLighty. I will love you forever and will send (virtual gluten free) cake!