As a parent,when you start the weaning journey, all you can think about is how much, if anything, your little one is eating. You’ll no doubt think about what exactly you’re feeding your precious little person, and of course you’ll probably think about whether you want to go down the purée or baby led weaning route. You probably won’t have thought about the likes of the use of cutlery. And that’s absolutely fine.

Of course, parenting is an ever evolving concept, and just when you’ve mastered one thing – the weaning – your thoughts turn to other aspects of parenting that you need to conquer. And all of a sudden, one of the things that you need to conquer – or at least something that people will comment on to make you feel like you ought to conquer it – is the use of cutlery. Up until now, you’ve been so caught up in “What have they eaten today?”, “Bave they had enough?” and “Have I made sure they’ve had their five a day?” that cutlery is often the last thing on our radar. Not to mention that you’ve probably been trying to limit the already very messy task of baby led weaning and the fact that most of our little darlings don’t have the hand eye coordination for cutlery too early on!

Over the past six months, Baby Lighty has become quite confident at using a fork and a spoon. We’ve not quite cracked the knife yet – it’s used more as a play thing than anything else – but we’re getting there. We were recently sent a set of Obbabee Cutlery to have a whirl with, to see whether this aids Baby Lighty in getting to grips with learning how to use a knife and fork properly. Obbabee cutlery is ergonomically designed to teach children how to hold cutlery correctly, and therefore make the transition to using cutlery and independent feeding less stressful. They are also designed to develop greater control and coordination. 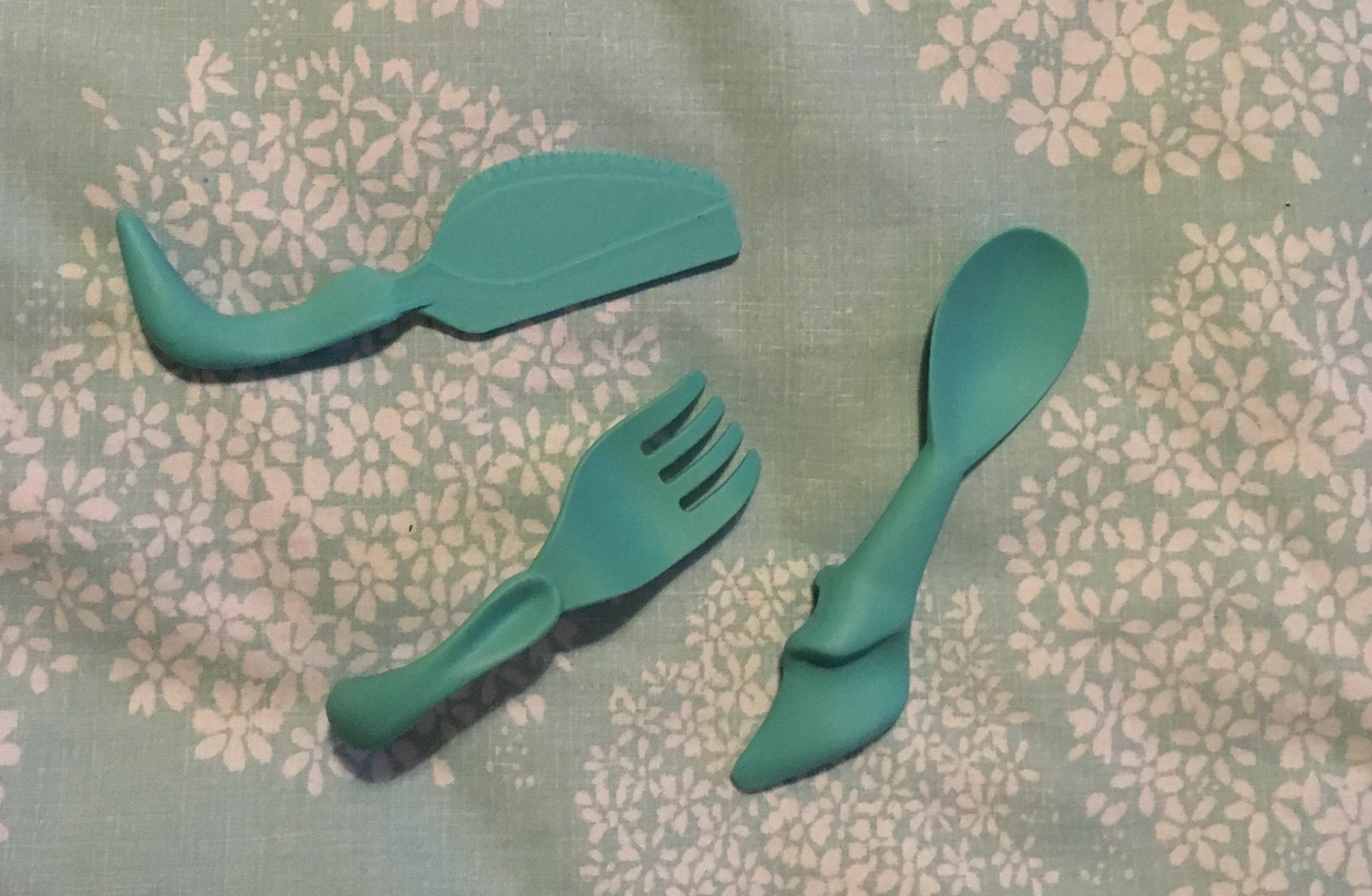 Our first impression on receiving them was that the packaging is lovely: the baby sized knife, fork and spoon looks great cocooned within the plastic bottle it’s packaged in. The cutlery itself comes in either a beautiful duck egg blue colour or a bright fuscia pink. And, most importantly for many of us busy parents, it’s completely dishwasher safe, too! 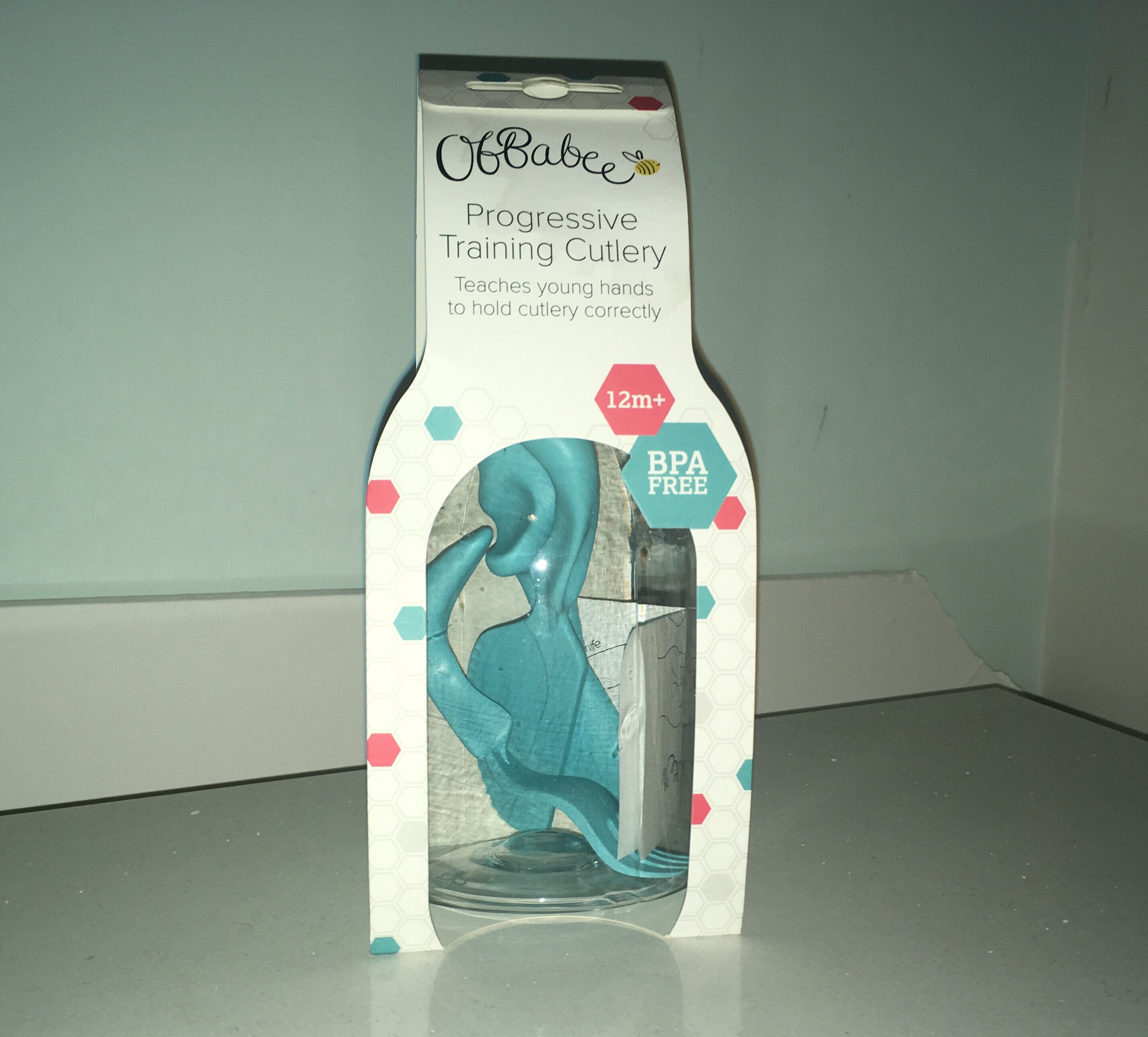 The Obbabee Cutlery is beautifully packaged!

It’s designed for children aged between 1 and 3 years old, and I think if it was given to a child as their very first means of using cutlery, it would definitely help the transition from eating with their hands or being fed by a parent to independent feeding. To an adult, the cutlery looks a little oddly shaped, but it’s designed to guide little index fingers and thumbs into the correct place to give greater control.

As Baby Lighty is now pretty confident with a spoon and fork at 19 months, at first I worried that he wouldn’t get as much out of the cutlery as he would have done as a younger child starting out with it for the first time. But, after a few attempts at using it, his fingers would get used to following the guides into the correct place. 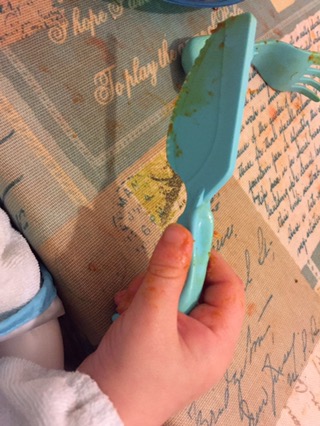 What’s more, when using the knife he definitely had more control over the Obbabee knife that a regular plastic child’s knife. The look of concentration on his face whilst using it showed us that he wasn’t just mucking about with it this time, he was actually trying to use the cutlery properly.

We also noticed that the fork is ever so slightly curved, so it can almost be used as a spoon to a certain extent (or a ‘spork’!) and food could be scooped up with it as well as prodded. I was really impressed that his little hands got to grips with the cutlery so quickly, although my heart did break a little bit at how grown up he looked holding them properly! 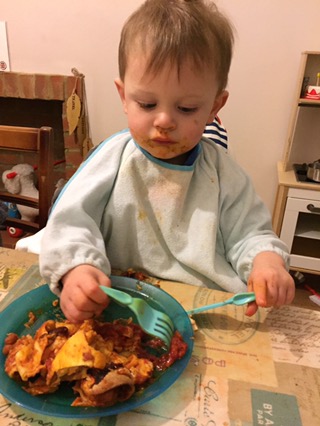 Holding his knife and fork properly!

And now, just as we’ve pretty much mastered the cutlery? Just as Obbabee Cutlery has started to teach him how to use a knife and hold his cutlery properly? Well of course, Baby Lighty has gone and changed the goalposts again: now all he wants to use is ‘proper’ adult metal cutlery! This parenting malarkey is never boring, is it?!

Disclaimer: We were fortunate enough to have been sent a set of Obbabee Cutlery in return for an honest review. All thoughts and opinions are my own.