It’s no secret that Mrs Lighty’s brain ain’t what it used to be. I’ve written previously about the fact that as mothers, our brains are so completely overcrowded with thoughts of our offspring that there’s not much room for anything else. This is why, all too often, when it comes to the likes of holidays, our littlies are more than catered for with every conceivable type of daytime outfit / nighttime outfit / spare outfits / outfits to sleep in / outfits to swim in / food / drinks / toys / books / transport / black out blinds / baby monitors and every other piece of baby kit we can think of, that it’s a miracle if we even manage suitable underwear for our own haphazardly thrown together outfits, let alone the likes of accessories and jewellery.

So with all of these things swirling around in our minds, is there even the tiniest bit of room for anything else? Anything, like perhaps, another language?

Once upon a long time ago, Mrs Lighty had something of a passion for language. I don’t profess to be very good at it – because I’m not – but I suppose in many ways, this was the start of my love affair with writing. I started local Spanish lessons at the age of 8, and went on to study it to GCSE level alongside A-level French. But it was German that really stole my heart; that most functional of languages, with maybe not such a pretty sound to most but which makes complete and utter sense to those in the know. I went on to study German to degree level, with a year spent in Austria where, I also decided, as is Mrs Lighty’s hair brained way of things, to start an evening class in Italian (if you’re ever looking for a challenge, I highly recommend trying to learn Italian in German when you’re a native English speaker!).

But, alas, over the years my German has become somewhat angerostet (rusty). They say if you don’t use it, you lose it, and it’s unfortunately true. What they don’t tell you is that if you have a baby in the midst of all this, your brain turns to mush to the extent that some days you’ll struggle with your mother tongue, let alone a different language all together (of course, if you’re talking about vocab from In the Night Garden, then you’re a pro).

So when we recently booked to go to Monschau, in Germany, for the bank holiday weekend, I must admit that the nerves did kick in. Try as I might to get my brain to switch to German mode in the lead up to the holiday, as I used to be able to do pre-Baby Lighty, it felt like there was nothing there. Like that space in my brain reserved for my German tongue had slowly slipped away, like the grains in a sand timer, and now there was just a kind of static fuzz buzzing around that part of my head. 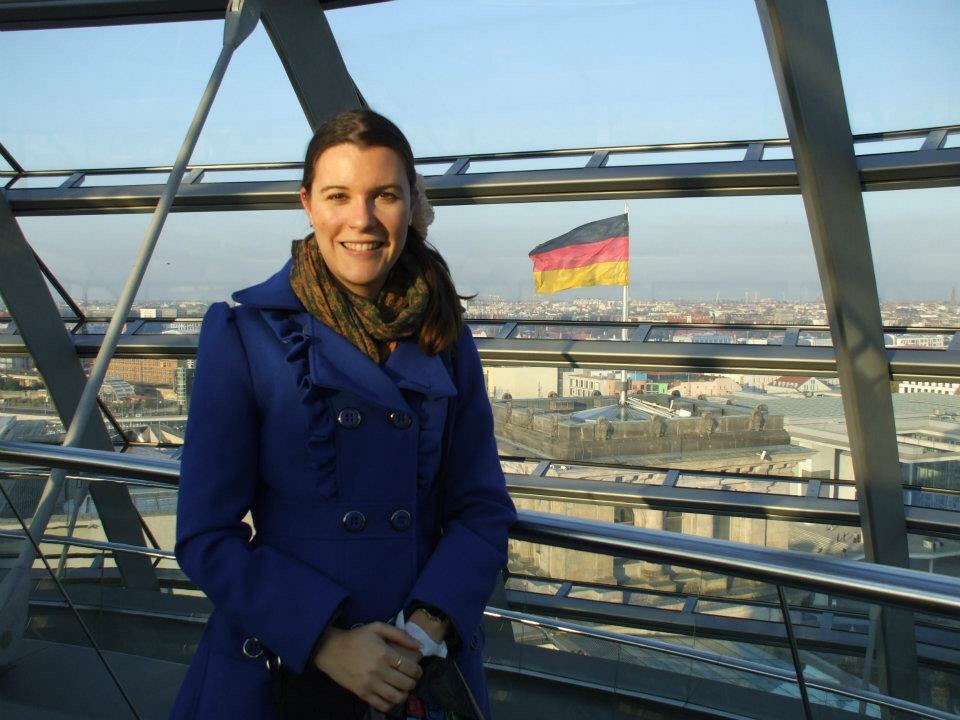 A much younger Mrs Lighty in the days when my brain would work in both English AND German and I could take an old lady to hospital after a fall on tour (true story!).

Every time Mummy or Daddy Hatchy, or Mr Lighty, said, “oh we’ll be OK on this trip, as Mrs Lighty will do the talking”, a shaft of fear would go through me. No, no, I wouldn’t be able to do the talking. I felt like I simply HAD. NO. WORDS. Which in itself is unusual, because, let’s face it, there’s never a time when Mrs Lighty is speechless. 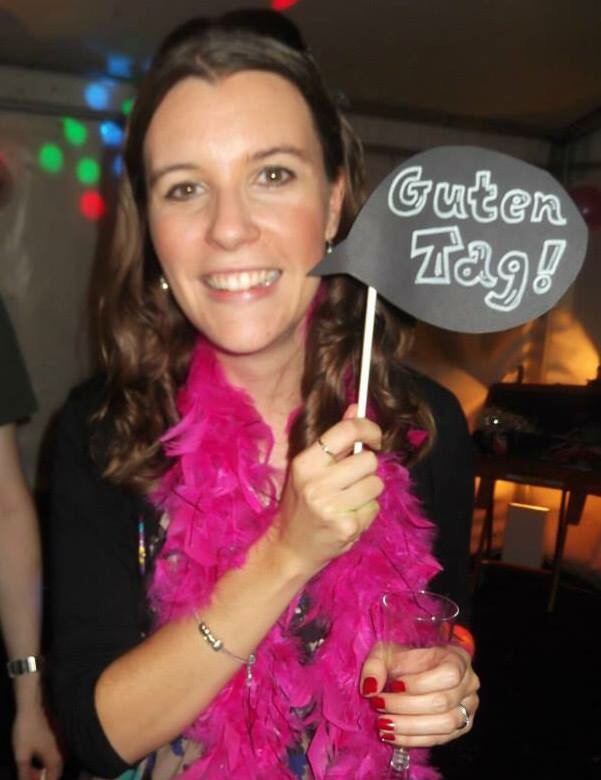 But all of a sudden, as quickly as those grains slip through the sand timer, our trip was upon us and we were in Germany…and Mummy Hatchy was handing me the phone number for the apartment owner and I was having to ring to say that we’d arrived.

A moment of fear struck me. Could I do this? Could I really do this?! Well, it turns out it’s a bit like riding a bicycle: there they were, the words! They’d come back!

Maybe I just needed to be in Germany for them to come back, soaking up the words on signs and shopfronts? Although as we were only just across the German border, there hadn’t been much time for that. Maybe it was adrenaline that got them flowing? Or maybe I just knew that I had to exercise that part of my brain in this situation, and so there the words were? Whatever it was, I’m grateful; grateful that I’m not just defined by baby brain.

And with the words came a little bit of new found confidence: the last time I’d used my German, it was in a business capacity, and within the travel industry at that; suddenly I was no longer having to ask about coach tours or boat trips, about set menus for groups or whether a guided tour was available, suddenly we were in the realms of der Hochstuhl (highchair), der Kinderwagen (buggy) and die Kinderkarte (children’s menu). And if I wasn’t sure of a word, I’d ask how you say it in German, something I wouldn’t’ve done previously. Perhaps being a mother opens your eyes – and your ears – to continuous learning, as we learn with our little ones every day?

Perhaps being a mother also means that you don’t mind looking a little silly at times, too, which translated (ha!) to not worrying what the locals thought of my attempts at speaking the lingo. Who cares if your very Essex-sounding German means that you create a queue at the ice cream shop, because you can’t remember the word for cone?! The people behind you will have to find patience in their hearts. Who cares if you don’t know every single regional dish on the menu?! You’ll find something you can recognise and eat, and maybe you’ll try a local speciality along the way. As long as you try, people will generally be very helpful and complimentary. 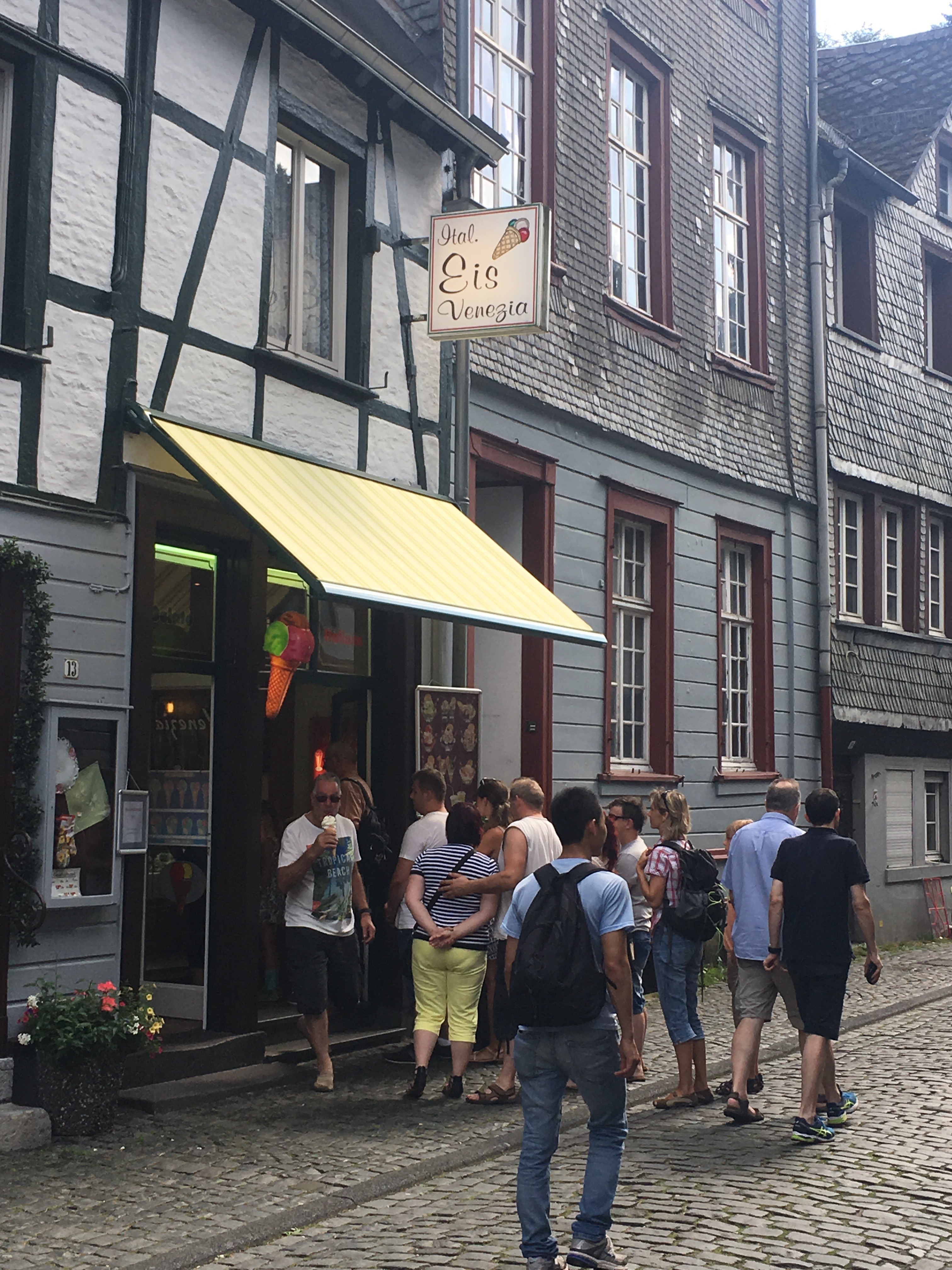 Oops…created a bit of a queue outside the ice cream shop with my dodgy German!

And even Baby Lighty took it in his stride when his Mummy was speaking a strange language, even in those times when I’d turn to him and speak Deutsch, because my brain hadn’t switched quickly enough back to English (never my forte, I would make a terrible interpreter). At 15 months he already says a fair bit in English – “doggy”, “bubble” and “what’s this?” being his favourite words and phrases – so who knows, perhaps the fact that he took it all in his stride means we have a budding linguist on our hands?! Furthermore, his book collection includes some picture books in German and he has a French-speaking baby walker, courtesy of a hand me down from our French neighbour, so why not?

And now, since our trip, I’m even more determined to find a baby language class…if nothing else, it will keep my brain from becoming further angerostet still. Old MacDonald’s Farm sung in German is always useful…right?!

With very many thanks to Mrs Jacky for her proof reading skills on this post and her help with the technicalities.