Any parent that lives in or around Essex will have heard of Marsh Farm. Mrs Lighty is no exception. And any parent that has heard of Marsh Farm will have likely heard how good it is as a day’s outing. Having said that, we’d made it until Baby Lighty was 22 months before our first visit to the farm. And 22 months of being told how great the farm is meant that this weekend’s visit had a lot to live up to.

We’d picked a good day for our visit: for April in the UK, the beautiful blue skies and warm weather were not to be scoffed at. We therefore decided to pack a picnic and set off for our day of fun. And our first impression on arrival was that this was going to be exactly that, a day of fun: we were greeted as we waited in the queue by a lady not dissimilar in appearance to that of a pantomime dame, entertaining the children and handing out mini Easter eggs. We then walked through the main gates and were greeted by the first of the animals. It’s actually a bit misleading how big the park is and how many different areas of entertainment there are when you first walk through, as the initial animal pens mask the play areas, theatre stage and further animals behind them. 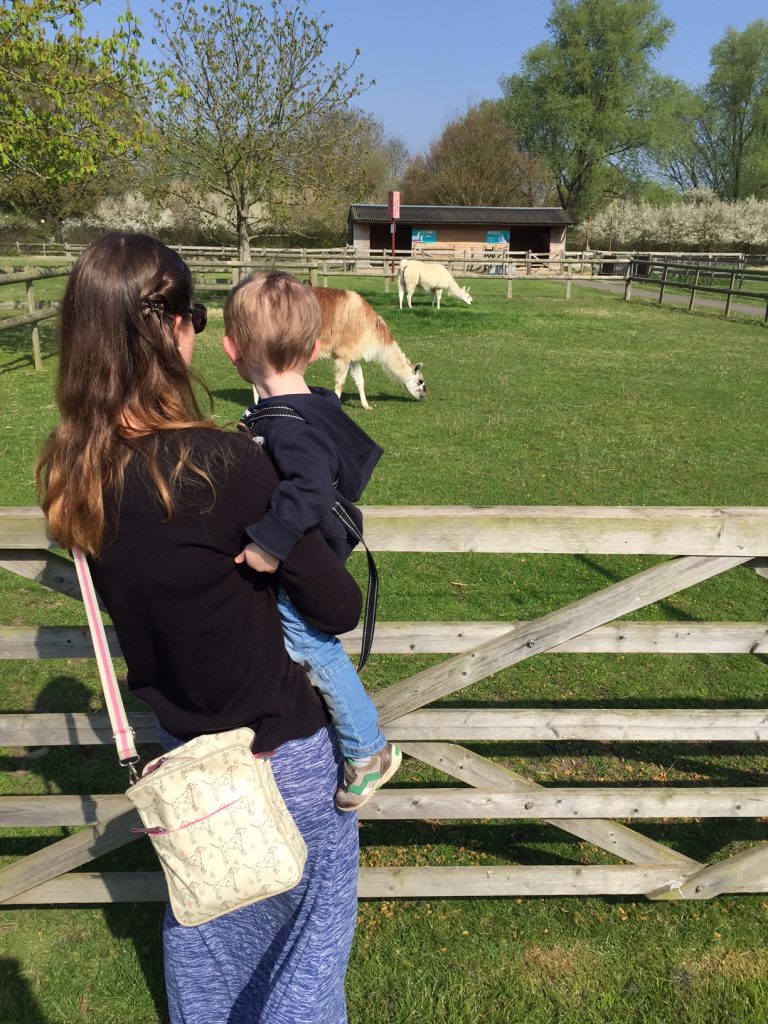 The llamas were some of the first animals we came across at the farm and one of Baby Lighty’s favourites.

We’d bought some animal feed, and so the first thing we did on arrival at Marsh Farm was feed the sheep. There were several little lambs in the pens which Baby Lighty had great delight in exclaiming “baby!” at. We couldn’t believe how brave he was when feeding the sheep, demanding that we give him “more” food to give to them, and saying to the sheep “yummy, yummy, yummy!” A couple of times he even reached through the bars to stroke their heads! 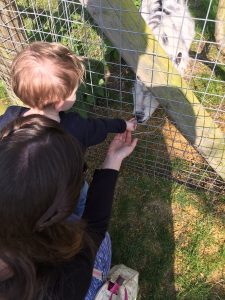 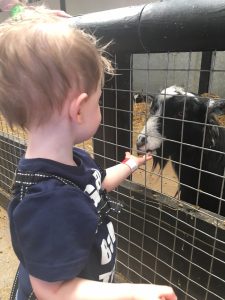 Feeding the goats at Marsh Farm!

We then decided that we’d head to one of the main attractions during our visit, the Easter Egg hunt. The farm states that it is the largest Easter Egg hunt in Essex, and it was certainly done on a grand scale. Before the hunt itself, there was a short show with the Mad Hatter, who cracked (get it?!) many an egg related joke and told us all that the fluffy Easter chick had delivered hundreds and hundreds of eggs, but that the March Hare was out to steal them, and should we see them, we were to shout “stop!” at him. Baby Lighty was completely enthralled with the Mad Hatter, although I’m not sure that he entirely knew what to make of him. 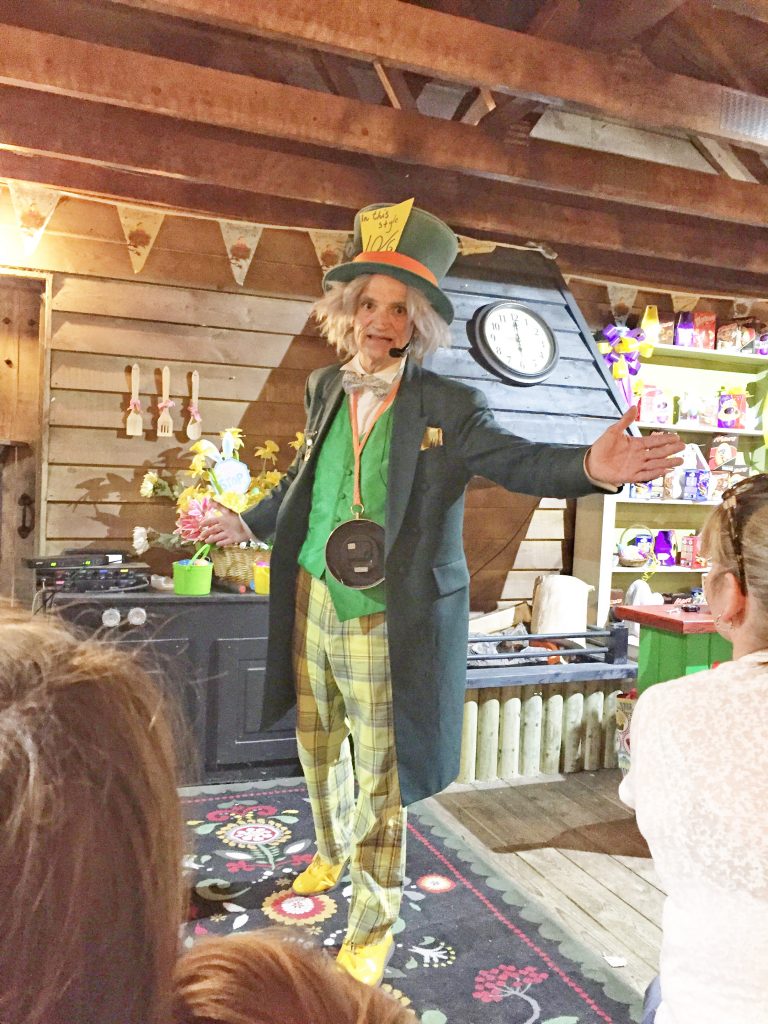 We then went outside to be introduced to the fluffy Easter chick, collect our baskets and then…we were off! There was a scramble to pick up the first lot of eggs, but there needn’t have been; there were literally HUNDREDS of eggs dotted about the course. Baby Lighty, of course, decided that he must pick up every. single. egg. I don’t think he quite got the idea that there were plenty to go around! 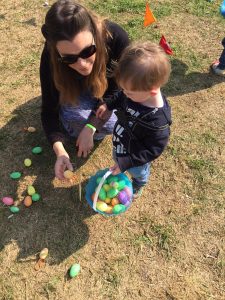 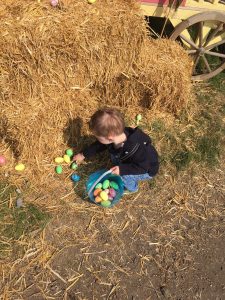 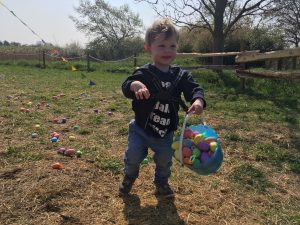 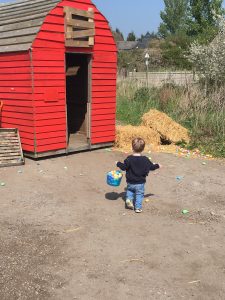 We soon came across the March Hare on our travels around the course (uh oh!) who said to Mrs Lighty “yep. This is going to take you about four hours the way he wants to pick up every single egg.” He clearly had Baby Lighty (p)egged (forgive me!! I’ll stop soon I promise)!! The March Hare then went on to throw some of the eggs at Mrs Lighty (how dare he!) to with Baby Lighty shouted at him: “STOP!” He’d clearly taken in what the Mad Hatter had told us and it was so cute to see him defend his Mummy!

After collecting more than enough eggs, we gradually made our way around the course – and yes, we were the last ones on it, due to Baby Lighty’s thoroughness – until we reached the end and Baby Lighty had to tip his eggs into a wheelbarrow to be ‘counted’, and he could then exchange them for either chocolate or a small cuddly toy. We really liked the way the egg hunt was done, with hundreds upon hundreds of coloured eggs dotted all around; this meant that the little ones could get stuck in as much as the bigger kids, as there were no older ones taking more than their quota and leaving nothing for the littles, and there were so many eggs that no one child could ever collect them all, plus they all got a small gift at the end for taking part. 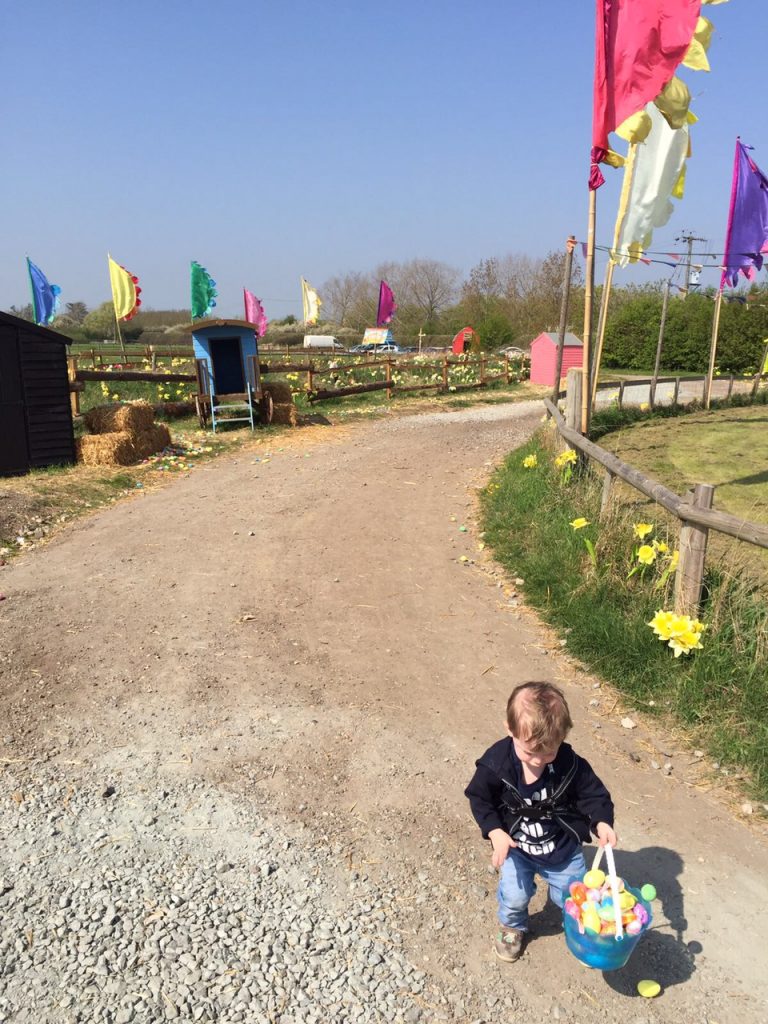 We were the last ones on the course… 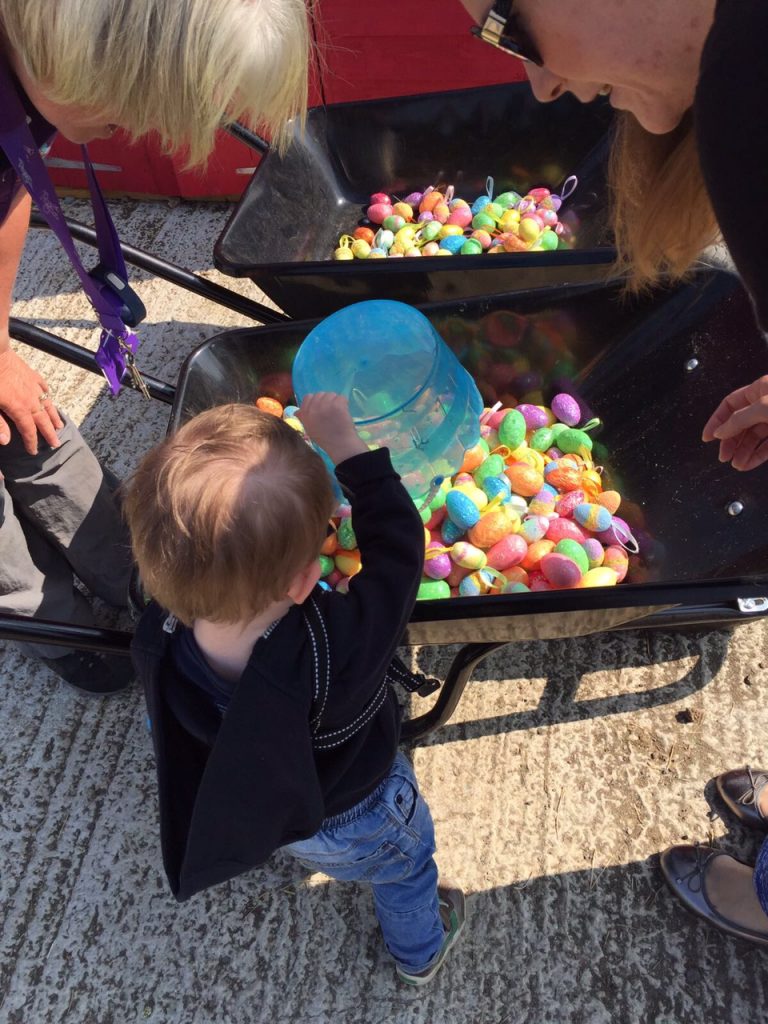 Having said all of this about the Easter egg hunt, even without this event, or another special event, there is still plenty to do at the farm, as you’ll see from the rest of this post. After our successes on the hunt and a brief stop at the bouncy pillows, we ate our picnic lunch, then headed to the theatre for another little show. This one was Bella Bunny, basically a mini dance party for the kiddywinks with Bella the Bunny mascot. Baby Lighty was a bit hesitant to join in, being one of the youngest ones there, but I think he enjoyed watching the bunny and the other children. We then headed to the pet barn, where we were lucky enough to find the keeper handling the ferrets, so Baby Lighty got to stroke one of them as they were taken out of the cage. He absolutely loved the bird enclosure where they were free flying around our heads, although I don’t think he quite understood that if he went up to them they would fly away!! 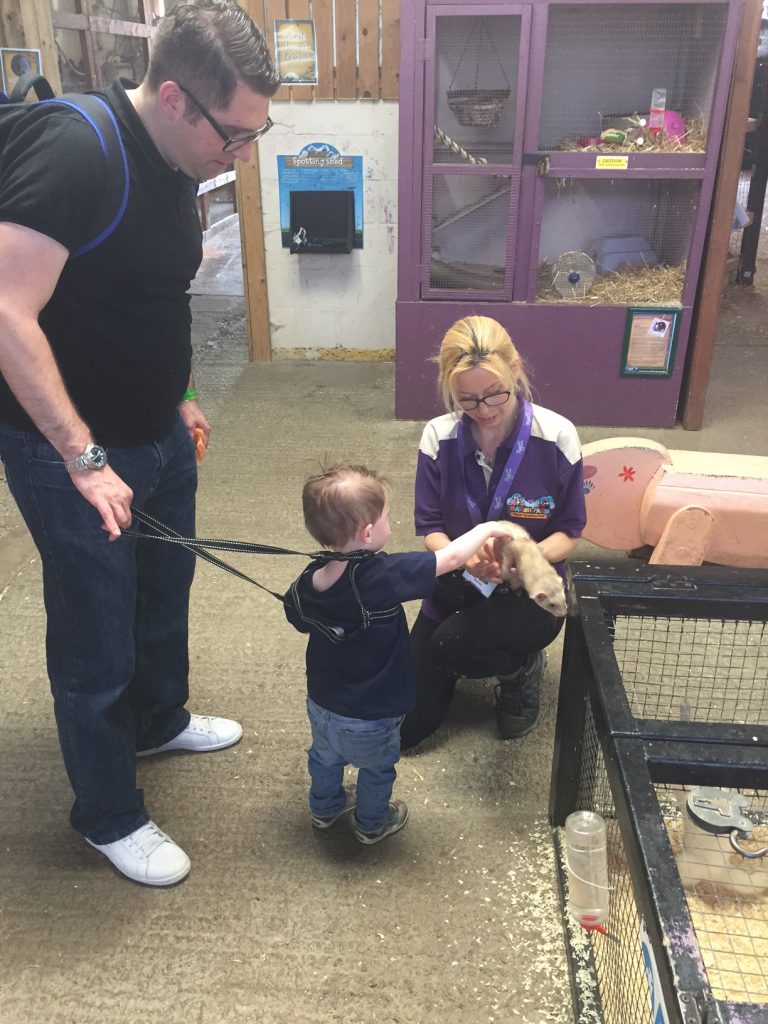 From here, Baby Lighty declared that he wanted to go on the slide. Slide is a bit of an understatement, actually; there’s a massive play complex at the back of the farm with closer to 8 slides probably, suitable for toddlers through to older kids. This was great, as there was no congestion having to wait for others to make their way down the slide, and there was plenty of play areas that he could explore without us having to go with him too much. He loved it and became very daring! 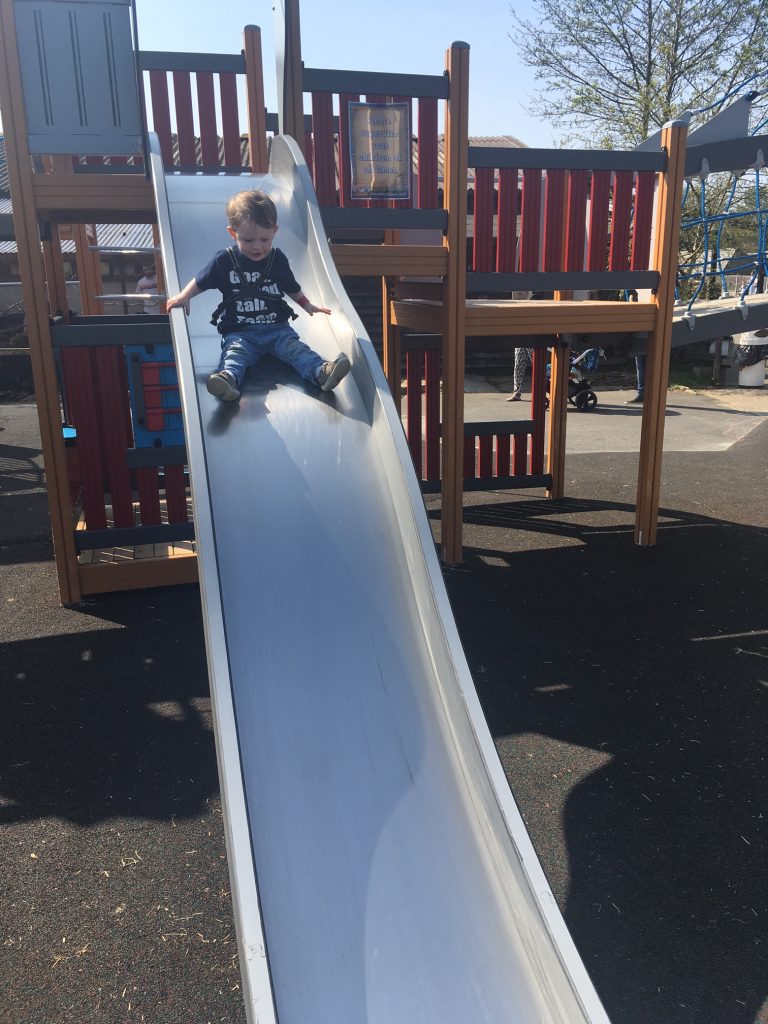 We also managed to fit in a ride on the teacups whilst we were in this area, and then we headed for the tractor ride. We all really enjoyed this, as it felt quite authentic, bumping along the dirt track, and the view was completely beautiful; not something I’d probably have expected from such a day out if I’m honest. 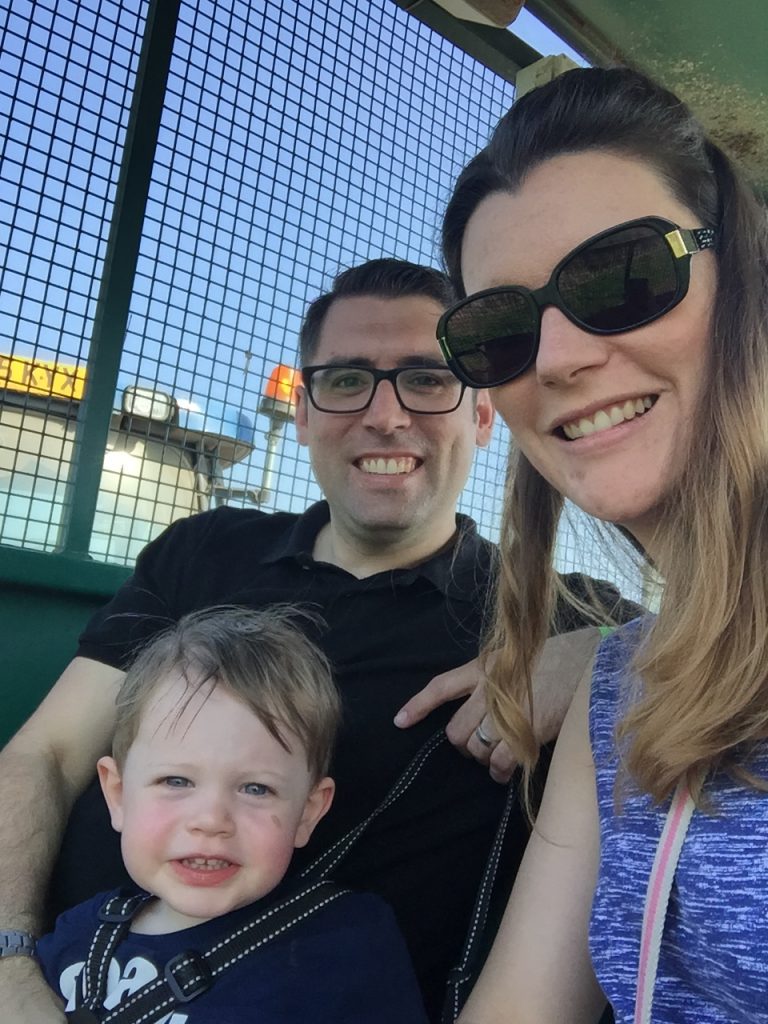 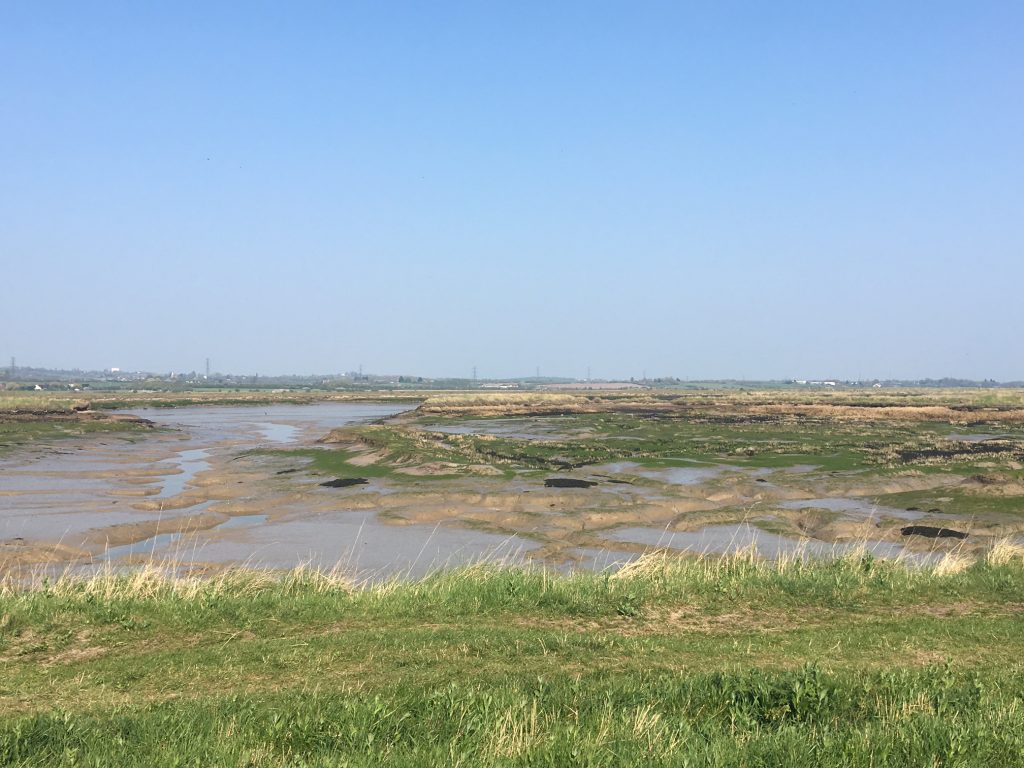 The stunning view from the tractor ride.

By this point in the day, I think it was safe to say that we were all flagging slightly, so Mr Lighty and I decided that it was time for a sit down and a cuppa, and Baby Lighty decided that it was time to throw himself down more slides in the soft play. We liked the fact that the toddler area was enclosed, so we could leave him to play whilst we sat and looked on. It was lovely to hear him giggle away with the other children as they all played together!

This pretty much brought us to the end of our day. We used up what little feed we had left to feed the sheep some more, went to visit the fish, and Baby Lighty said goodbye to the pigs and the llamas, which, incidentally was a new word which he seems to have added to his ever expanding vocabulary. There was just time for a quick play on the bouncy castle tractor, and then, of course, Baby Lighty spotted that there were some more slides that he hadn’t yet been on. Quite how he had the energy to keep going at this point, I don’t know, but the main thing was that he was absolutely loving it! 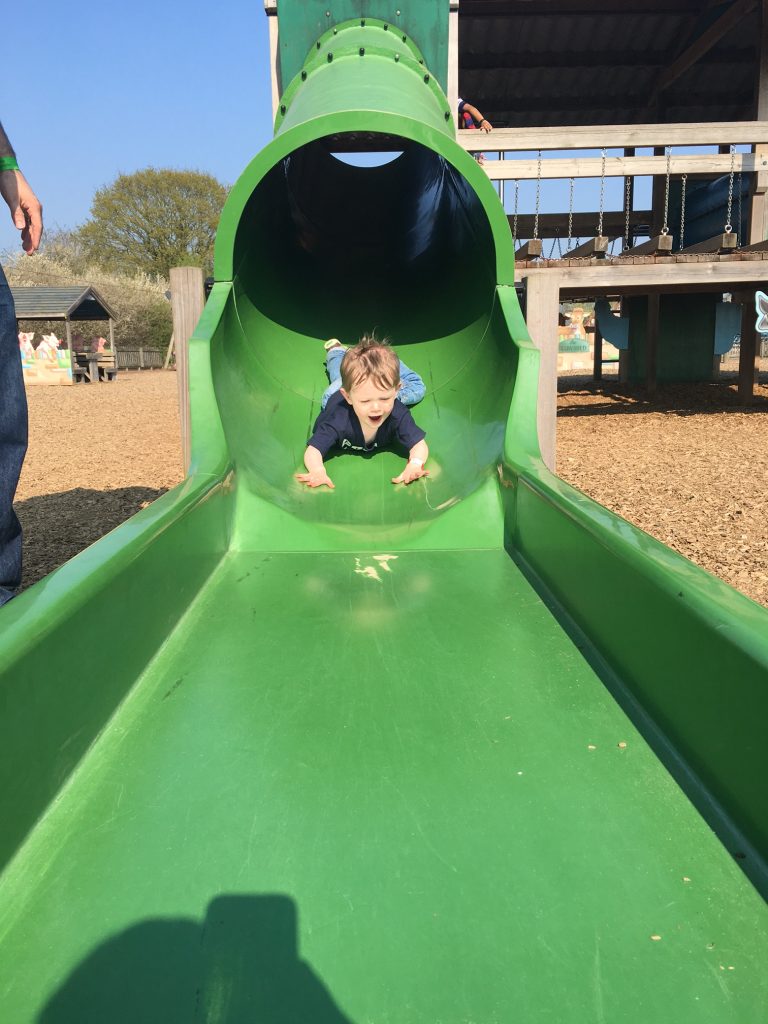 Yet another slide, and getting very daring!!

We had an awesome day at Marsh Farm, and I don’t think we could have asked for a better first visit. I think it’s probably a sign of a good visit when you say to your husband, “I quite want to enter my own giveaway, so that I can win tickets to go back!”.

And on that note, head over to All Things Spliced’s Facebook page to enter our giveaway for a family ticket for up to four people to Marsh Farm.

Competition Terms and Conditions: Competition closes Wednesday 12th April 2017 at 9pm. Winner will be chosen at random. This competition is not endorsed by Facebook. No monetary or alternative prize available. One entry per person. Tickets must be used within two months of receipt. Please note, the Easter Egg hunt is running until Monday 17th April 2017. Whilst myself and Marsh Farm will make every effort to get the tickets to you in time for the bank holiday weekend, All Things Spliced cannot be held responsible should this not happen. Various events take place at Marsh Farm throughout the year, please check their website for further details and any additional costs that may be applicable for special events: https://www.marshfarm.co.uk/

Disclaimer: we were kindly given a family ticket to visit Marsh Farm in exchange for this review. All views and opinions expressed are my own and are completely honest.

6 thoughts on “An Egg-Cellent Day at Marsh Farm”