**Please note, if you wish to enjoy the magic of the Marsh Farm Christmas Experience for the first time on the day of your visit, alongside your children, please be aware that this post does contain ‘spoilers’ as to what happens during the visit. We were invited as guests of Marsh Farm to write an honest review, and as such I have included a lot of information regarding what happens as part of the visit. If you’d rather keep it as a surprise, please feel free to stop reading now, I won’t be offended!!**

I’d heard from friends who’d been to previous years’ Christmas experiences at Marsh Farm that the only way to describe it was ‘magical’. So when we were invited to experience the Winter Wonderland Christmas event ourselves, it had a lot to live up to. We’d already visited the farm – which is pretty notorious in Essex for its events – at Easter, and hadn’t been disappointed then, so I have to admit that when we received a phone call from one of Father Christmas’ Elves, inviting us as guests to experience it for ourselves, we were pretty excited.

We arrived ahead of our slot at 3pm. It was a clear, crisp Sunday on the day that we visited, so we took the opportunity to have a look round the farm while we waited for our turn. Be aware that if you go at this time of year, many of the animals will be offsite for winter, and some of the play equipment isn’t open. Having said that, because it was such a sunny (if somewhat cold!) day on the day of our visit, we had a go at the mini golf, which is a new feature since our Easter visit. This was Baby Lighty’s first time playing mini golf, and we were quite surprised at how seriously he took it! 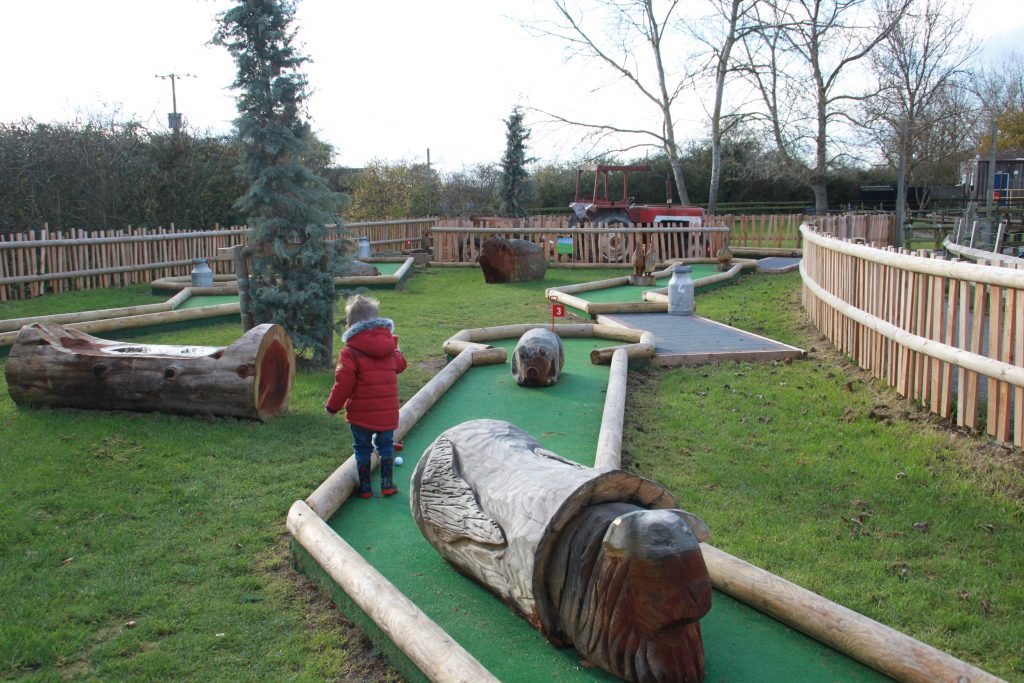 After a little look around the animals that were out for viewing, and a good chunk of time spent in the soft play area, it was our time to start the Father Christmas experience! Right from the off, everyone is in character. Two elves greeted us at the entrance, cutely named Wiggles and Giggles. They stamped Baby Lighty’s passport, before another elf, called Muffin, who was to accompany us through the whole of the journey, plied us with candy canes. There’s an opportunity at this point to purchase hot chocolate at an extra cost, which can then be enjoyed as you watch the introduction to the experience. The two elves, Muffin and Whistle, explained that we were going to be enrolling in Elf Academy. And before we knew it, we were whisked off to exactly that!

Off we marched to Elf Academy, and after opening the magic doors with a little bit of singing, we were in and being given our first lessons in how to be a good elf. When the elves asked who’d like to ring the magic Christmas bells, I was pleasantly surprised to see my somewhat-shy-in-large-crowds little Baby Lighty cautiously raise his little hand in the air. The look of wonder on his face when he was handed a bell was magical in itself! We went on to learn about keeping Christmas spirit alive, learning how to see who has been naughty, mending toys and being caring, loving and kind all year round. And then we were pronounced fully fledged elves! Baby Lighty even has a certificate as proof!! 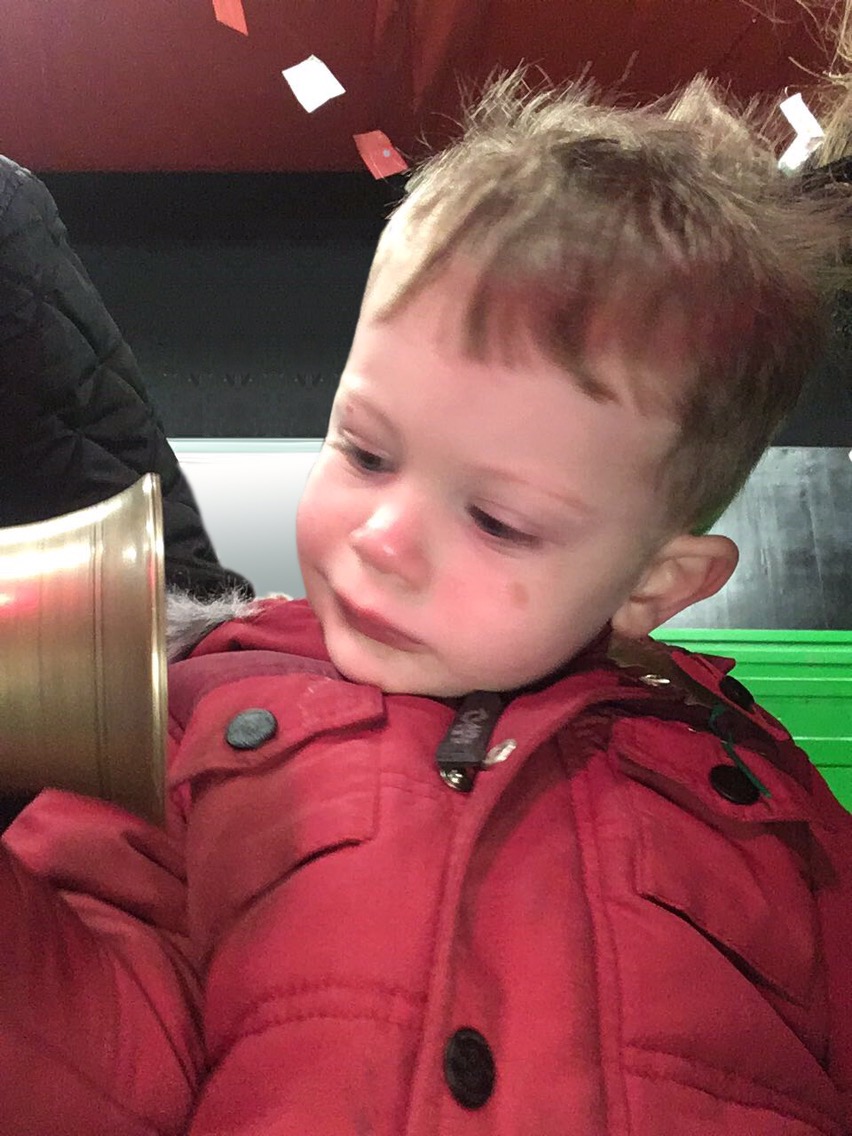 “What is this magic bell?!” 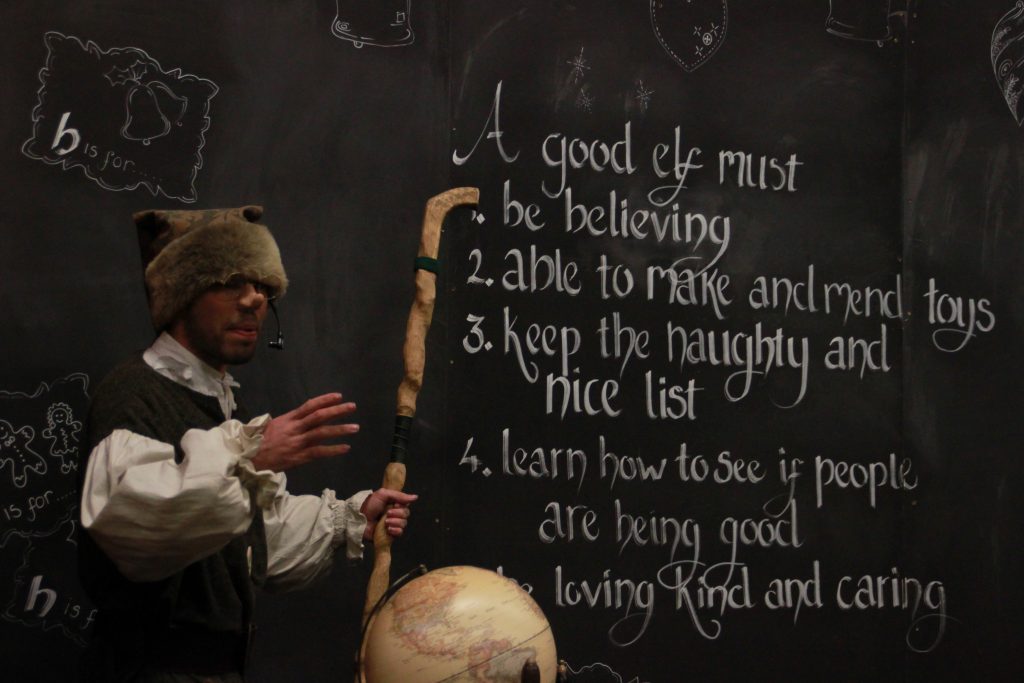 It was then time to be transported to a winter wonderland landscape. We went through Father Christmas’ wardrobe no less (!), and took our seats below a roof full of twinkling lights, like a magical night sky. I have to say, for me, this part was my favourite part of the whole day. We were introduced to the idea of the polar bear being King of the Arctic, and were told to shout out  “Wake up Erland” to see if we could get a special guest on stage. And lo and behold, it worked! A gorgeous polar bear took centre stage, and Baby Lighty was just so full of wonder. 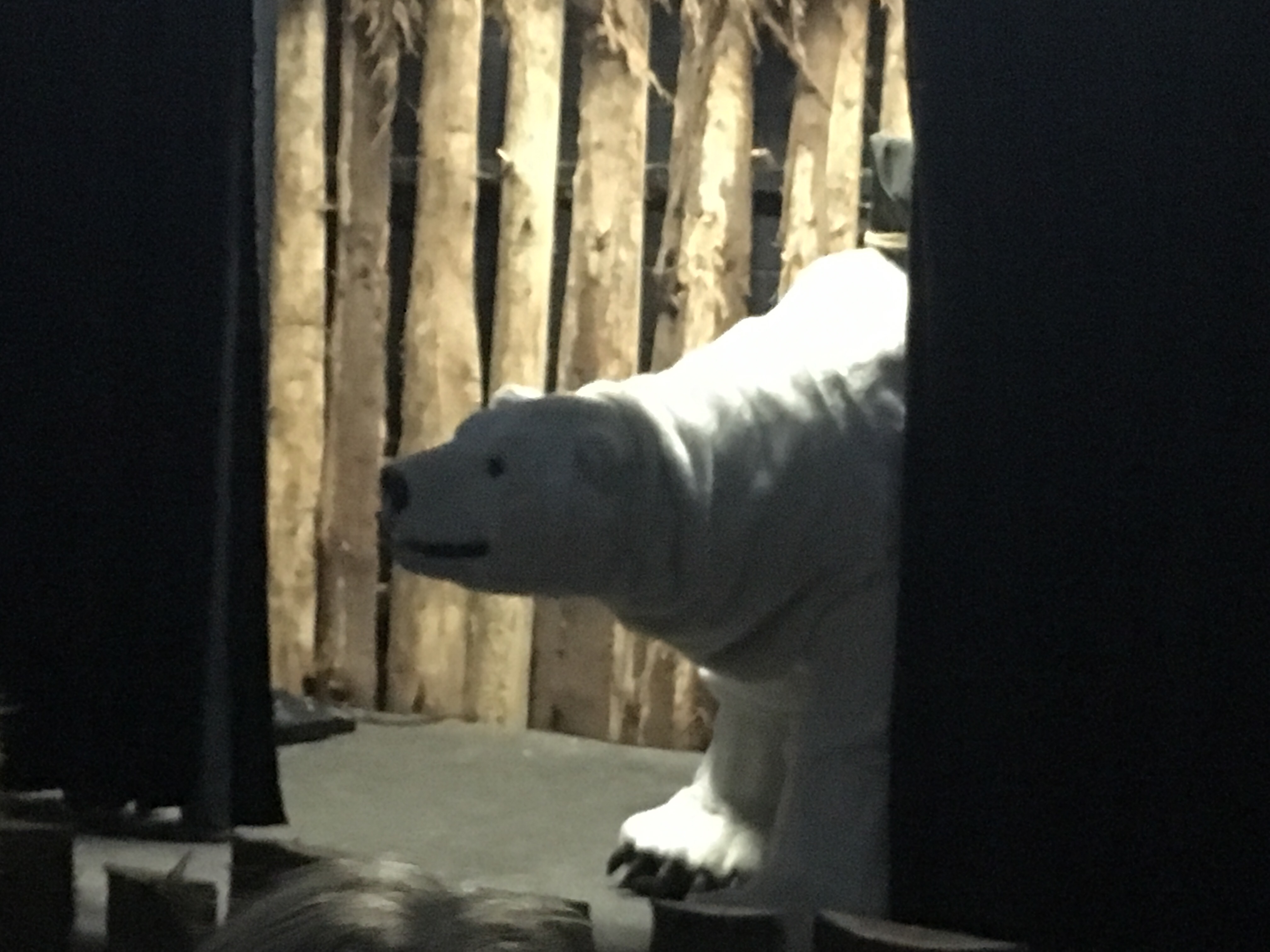 With Erland the polar bear’s help, and the magic wands that all of the children were given at this point, we then proceeded to bring a very special element to any Christmas: snow. The audience were covered with snow, and the children were encouraged to get up and enjoy the spectacle. It was really lovely. And then we stepped outside, into a completely snow covered landscape! It felt like just as you enjoyed one thing and thought there couldn’t possibly be more, there was more. 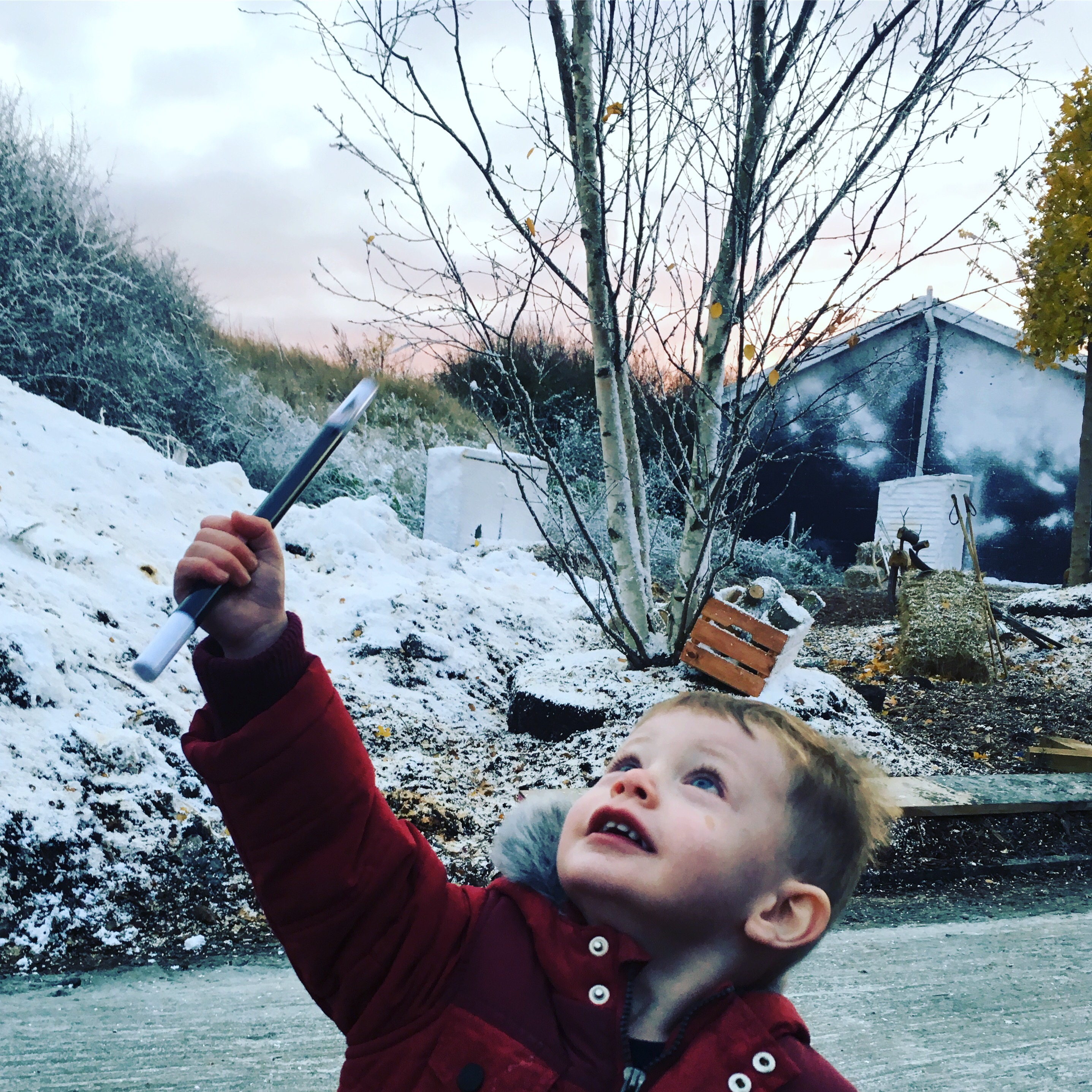 Trying to make it snow with the help of his magic wand!

From here, we paid a visit to Mother Christmas. She had her kitchen laid out and ready for us all to decorate gingerbread men! Now I have to say that the only thing that slightly marred our visit was that, being located on a farm with marshes, you did get all the smells of the farm in this room while we were doing this activity, which was a shame. However, it didn’t deter Baby Lighty from getting stuck into the decorating! 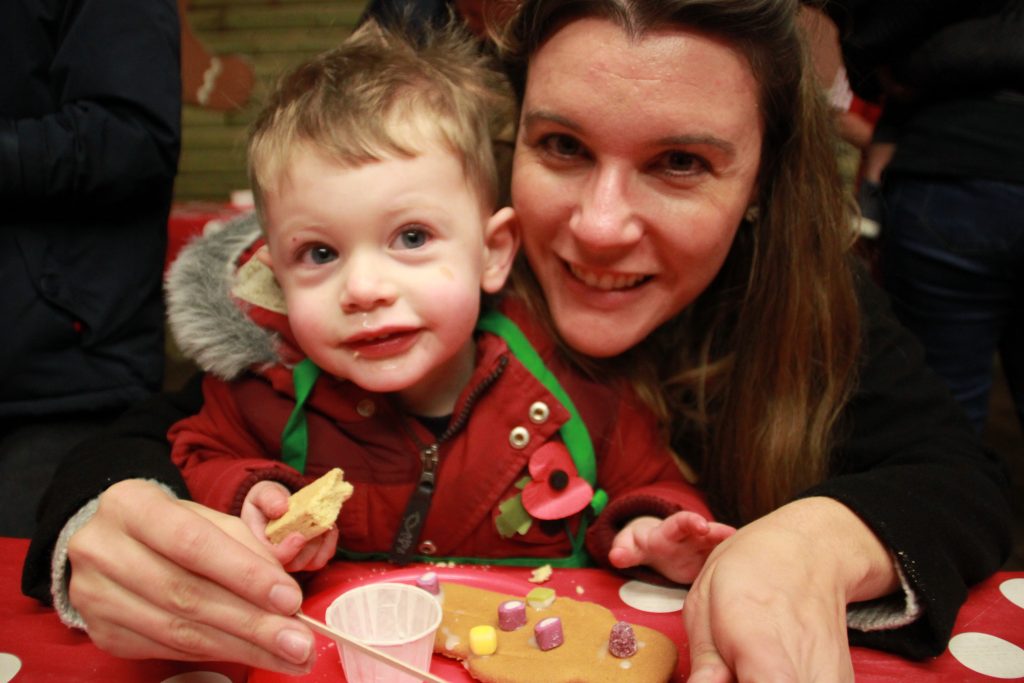 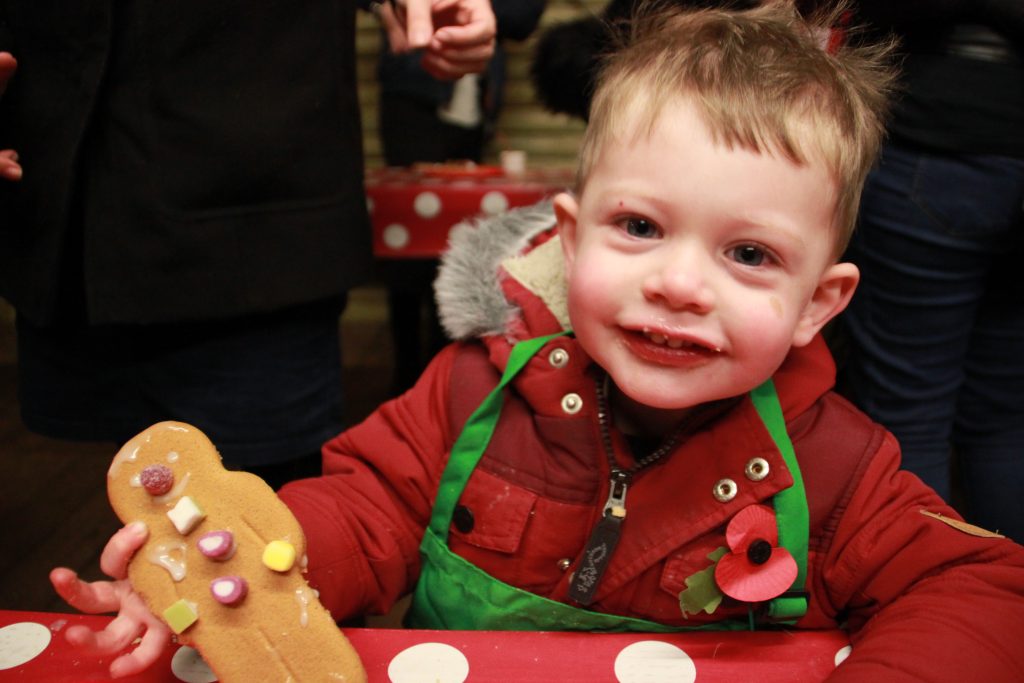 Proud of his creation!

Now full of biscuits, we made our way onto the main event: meeting the big man in red himself! We walked through a tunnel made of snow, into a big icy room, with a little house that belonged to Father Christmas. Whilst we waited for our name to be called, the elves made balloon animals for the children, and there was also the opportunity to take an ‘elfie’ with the elves that had looked after us so well throughout the day. 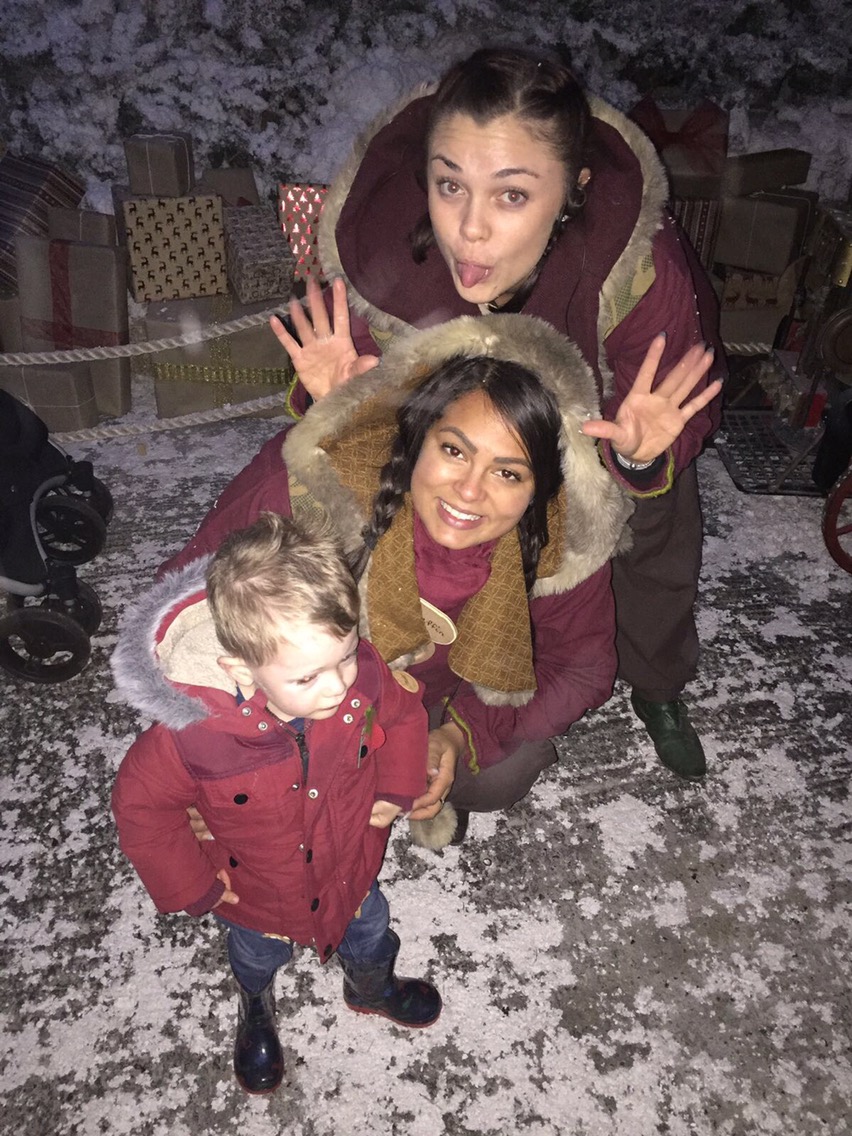 Before we knew it, our name had been called, and we had to knock on the magic door to go and see the star of the show. Baby Lighty’s face was a picture as he realised who it was in front of him, and with a big gasp he shouted “Father Christmas!” He also proceeded to tell him about the fact that we’d made a gingerbread man!! 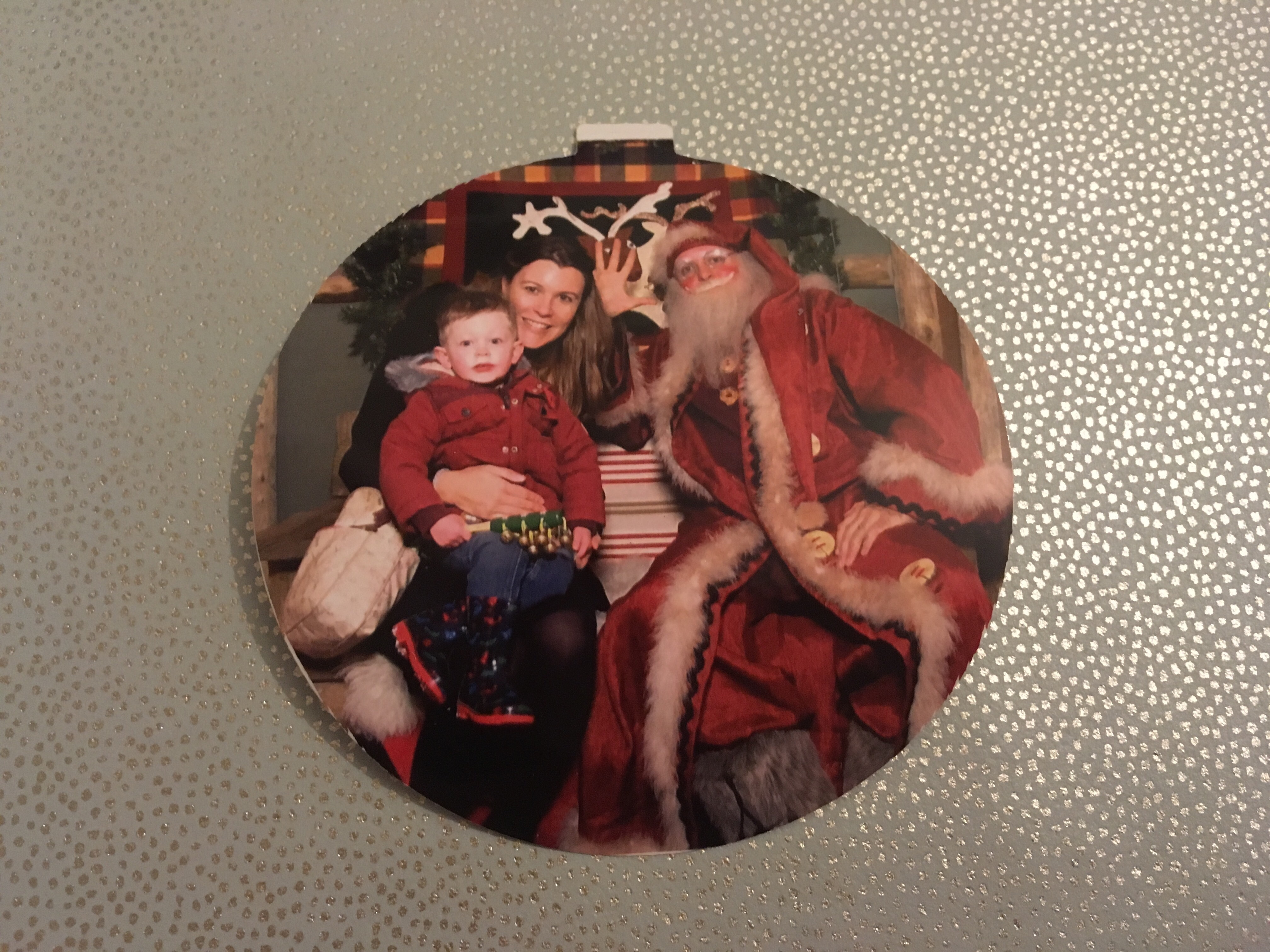 With the big man in red!

Father Christmas then told us that if we went to see his elves in the workshop, we’d be able to help them to make a toy which we could take home with us. We were directed by the elves into a workshop where we could stuff our very own teddy bear! Baby Lighty chose a husky dog, and helped me to fill him with the stuffing, and added a heart, too. Our doggy was promptly named ‘Muffin’ by Baby Lighty, after the elf that had looked after us on our journey. There’s an opportunity to purchase clothes for the bears at an extra cost at this point, if you wish to do so.

For many Christmas Grotto experiences, having received a present from Father Christmas would be the end of the visit. But not at Marsh Farm. No, from here we were led back out into the snowy landscape, where night time had fallen and it continued to look quite magical. Across train tracks we went, and into a magical toy shop. Throughout the experience, we’d been given ‘Snowies’ to collect. These are magical elf currency. Once inside the toy shop, we handed these over…and were told we could choose any toy in the store! Baby Lighty was completely overwhelmed; every time we asked him what he wanted, he kept saying “I don’t know!” Eventually he settled on a little car and track set.

At this point, you can also purchase the photos taken with Father Christmas at an extra cost, if you wish to do so. And that pretty much signals the end of the experience. We were transported back to reality by a cheery elf, who thanked us for our visit, but I think it should have really been us thanking him!

Especially as, as we went through the very last magic door, Baby Lighty cried out, “I no want to go home!”

And I think that says it all: after a day at a magical kingdom, why would we want to go home?!

Top Tips to make the most of your visit to the Marsh Farm Winter Wonderland Christmas Experience: 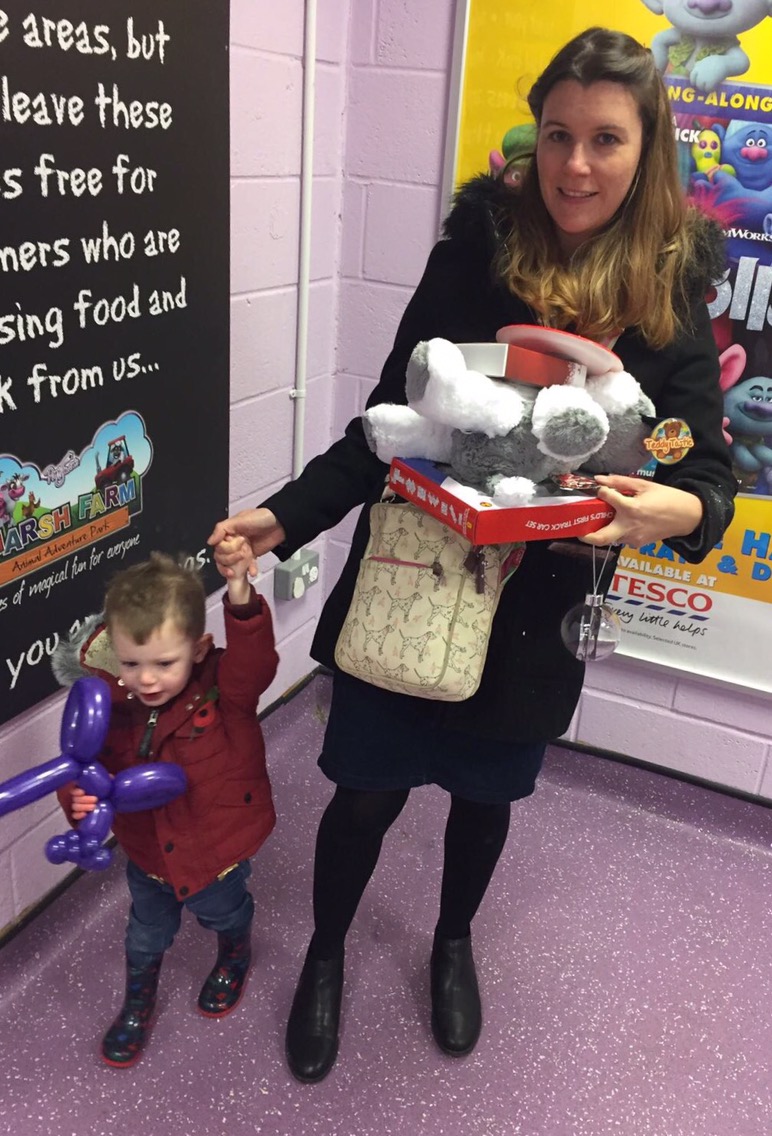 Mrs Lighty trying to hold all of the goodies and Baby Lighty!!

No matter whether you follow these tips or not, I really hope you enjoy your visit to Marsh Farm’s Christmas Experience as much as we did!

Disclaimer: Please note, we were gifted the tickets to Marsh Farm and invited as guests to the Christmas Experience at Marsh Farm in exchange for an honest review. All opinions are my own.