They say a change is as good as a rest. So when we had a week booked as annual leave in September, and decided that we couldn’t afford to go away for all or part of it, Mr and Mrs Lighty were determined to make the most of these rare family days off together and enjoy some daytrips. What we hadn’t decided on, or at least hadn’t banked on, was that during the week we took off, Britain was going to bask in a mini-heatwave and we’d be enjoying a glorious week of Indian Summer which certainly facilitated our outings.

So what did we get up to? Well, the Monday – our first day off – was pretty chilled. Baby Lighty and I headed to our usual babygroup we attend on a Monday, as it was the first session back after the summer holidays, and then we met friends and Mr Lighty in the nearby park afterwards for a quick play.

Tuesday was the day we’d planned a ‘big’ day out, as the weather was supposed to be at its peak. As it turned out, it was pretty nice on the Wednesday and Thursday too, but that didn’t stop us heading to Brighton for the day on the Tuesday. I’d been before for two hen dos (one of which was Mrs Lighty’s own!), but Mr Lighty had never been. He loved the quirky charm of the place, declaring that it has quite a different feel to other seaside resorts, and I definitely know what he means. It has that whole artists’ vibe, with its chic little galleries tucked under the arches leading directly off the beach, and trendy eateries dotting the coastline. That’s not to say that it doesn’t have its fair share of traditional amusement arcades on the pier, or bucket and spades, sticks of rock and tacky souvenirs in the gift shops! 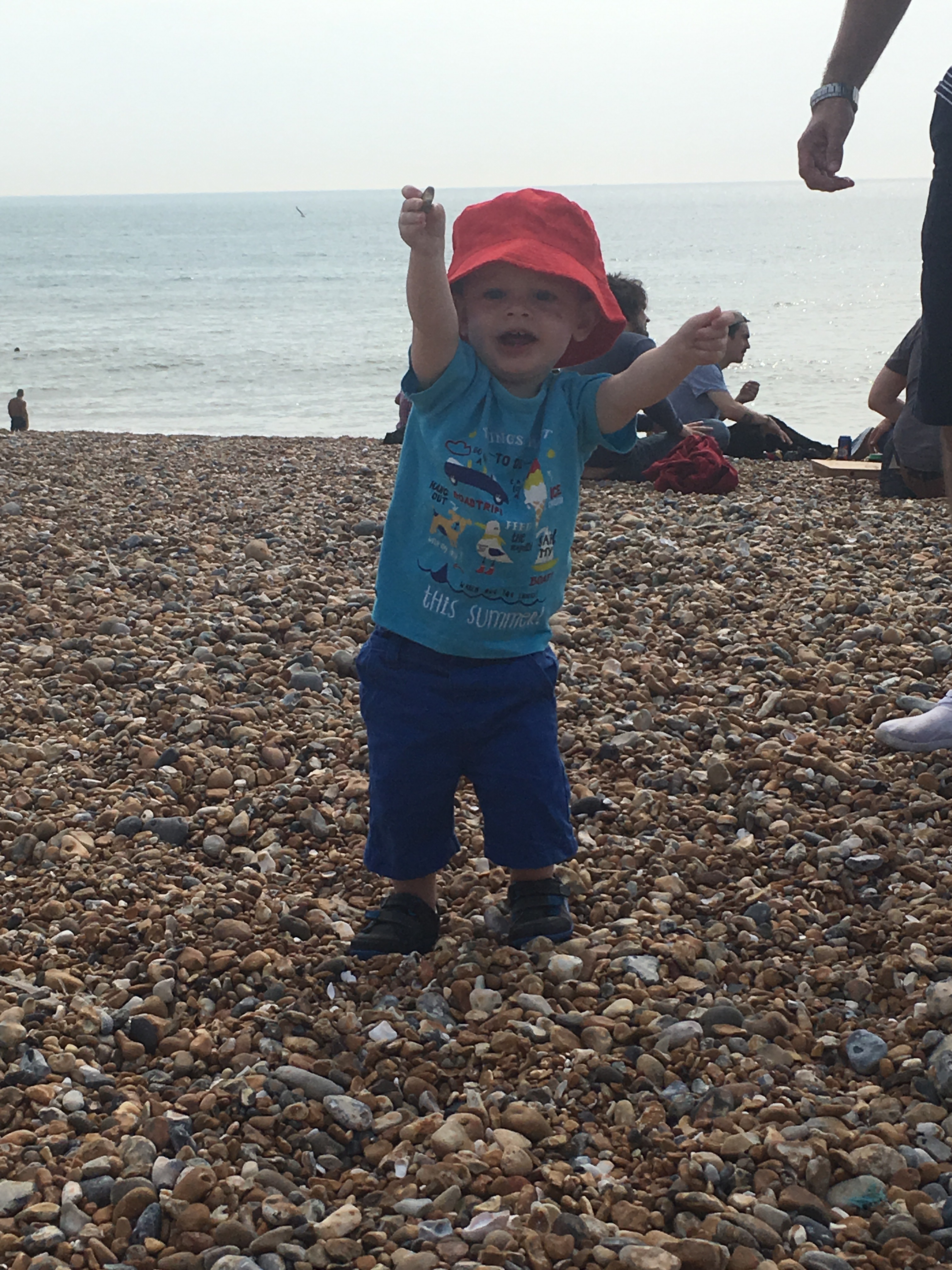 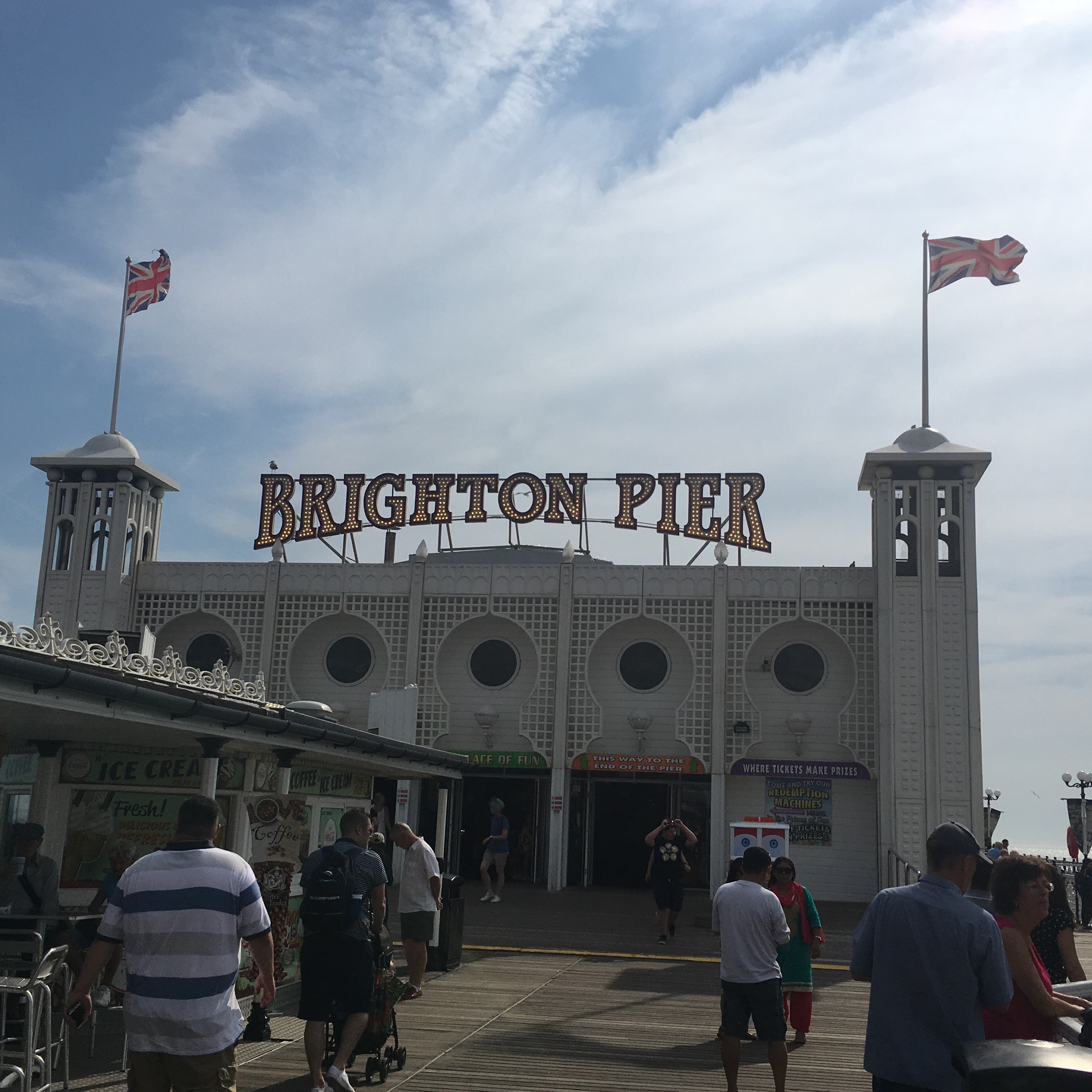 On the pier (spot Mr Lighty!). 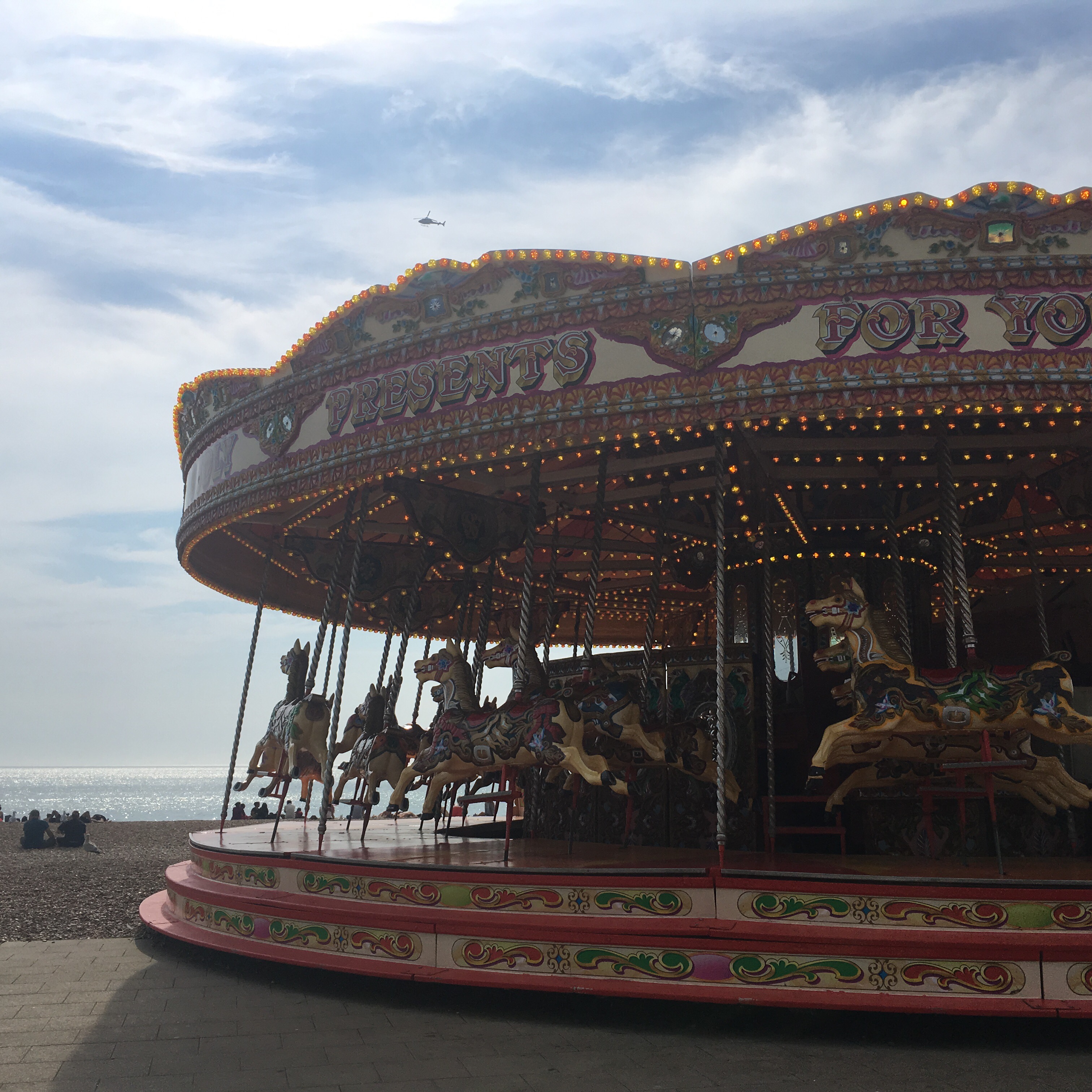 Just one of the seaside traditions you’ll find in Brighton!

We had a lovely day, meandering through The Lanes and window shopping in the achingly cool boutiques, then eating sandwiches on the beach, with Baby Lighty attempting to chase seagulls and filling his plastic bucket with stones, before taking a long walk along the seafront and the pier. As Mr Lighty had never been, we also walked to the Pavilion, which he was super impresssed by (I guess not every city has the grandeur that is the Pavilion nestled just a few roads back from the sea!), and we stopped to have a quick cuppa in the park, while being serenaded by a busking zebra (yes, really! Just goes to show how wacky-yet-trendy the town is!). 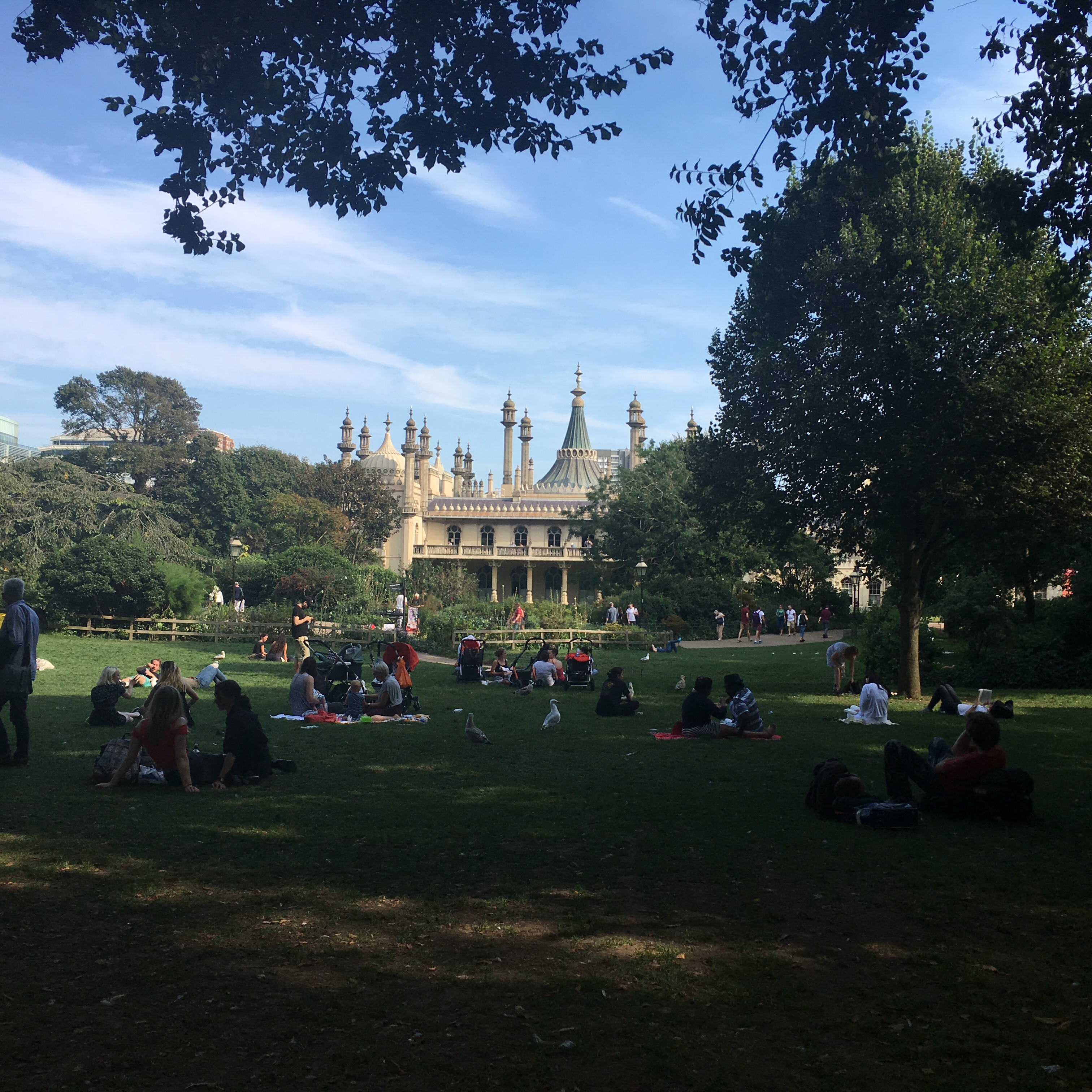 Listening to a zebra play the keyboard at the Pavilion Cafe!

Wednesday was a bit more chilled again after our busy day in Brighton. We did pop along to our local car bootsale – the first time we’d been on a Wednesday as opposed to a Sunday – and were pleasantly surprised by how relaxed and manageable it felt in comparison to our weekend visits. It also had more of an antique-y vibe to it, which made it a lot more fun to mooch around and take in what the sellers had on offer! 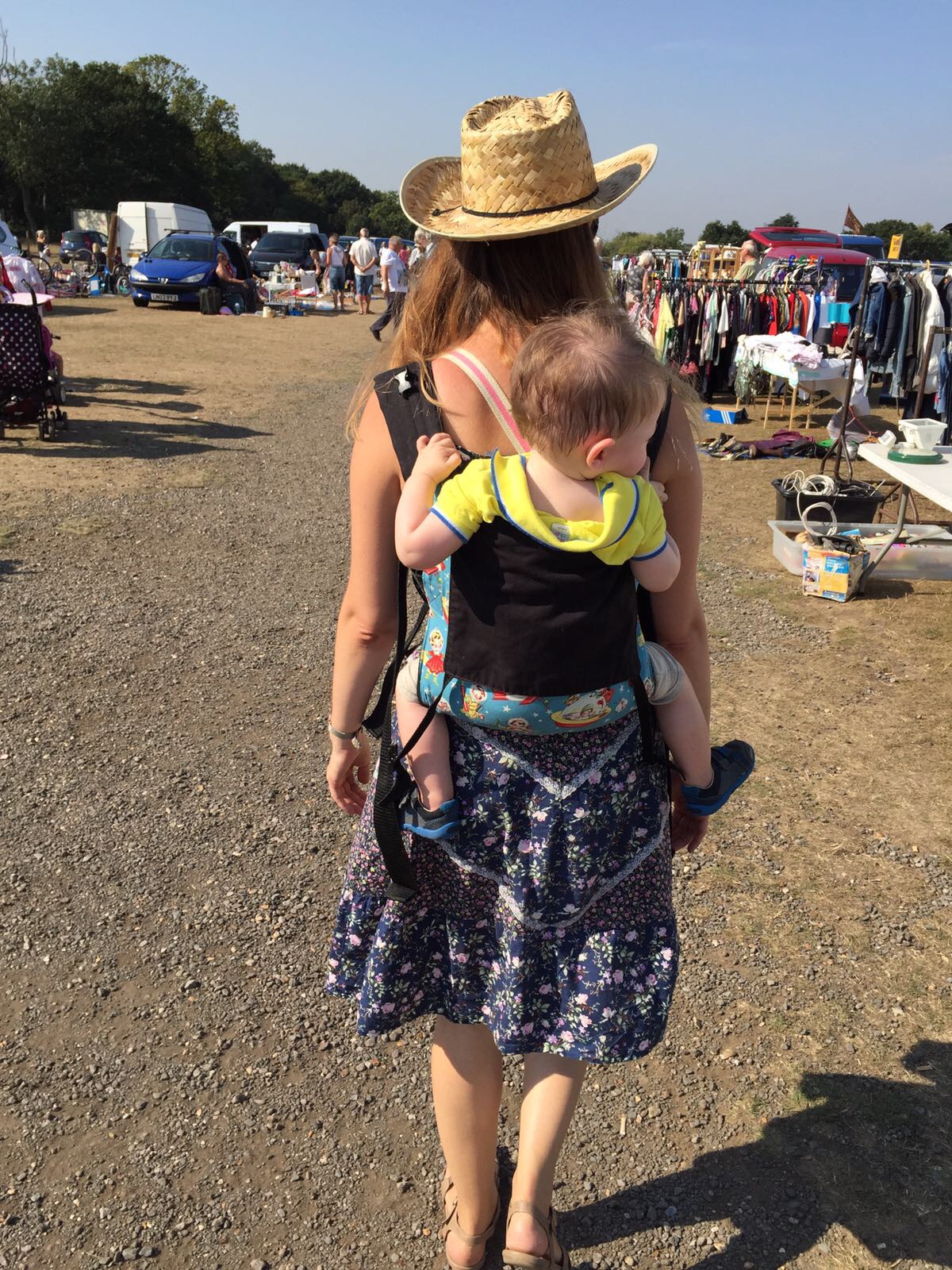 Car boot sale fun! I actually bought the hat for Baby Lighty to wear to a farm themed fancy dress later on in the week!

We were a bit undecided about what to do on the Thursday, and in the end the weather forecast made up our minds. According to the forecast, this was to be the last of the September sun for the time being, with the Friday looking pretty miserable, and so with this in mind we firstly visited the English Heritage’s Tilbury Fort, as we’ve had membership for a while but haven’t really made the most of it (we’d already visited Down House, the former home of Charles Darwin, the weekend previously). It was interesting, with lots of army related memorabilia, and lovely views across the Thames, but coupled with our trip to Down House, I hate to say it but I think our National Trust and English Heritage visiting days are numbered for a while; at 15 months, Baby Lighty’s at that age where he doesn’t mind being in the sling if there is enough around to interest him, but this doesn’t necessarily include artefacts and memorabilia at stately homes. He also likes to have a run around (which is fair enough, what toddler doesn’t?!) and whilst this was possible in the beautiful grounds of Down House, it wasn’t really possible at Tilbury Fort. We’ve always loved the National Trust and English Heritage and I’m sure we’ll be regular visitors again when he’s old enough to understand a bit more of what these visits are about, or when he can enjoy the more child-friendly features like playgrounds at some of the properties, but for now I think these sort of visits need to be shelved for a while. 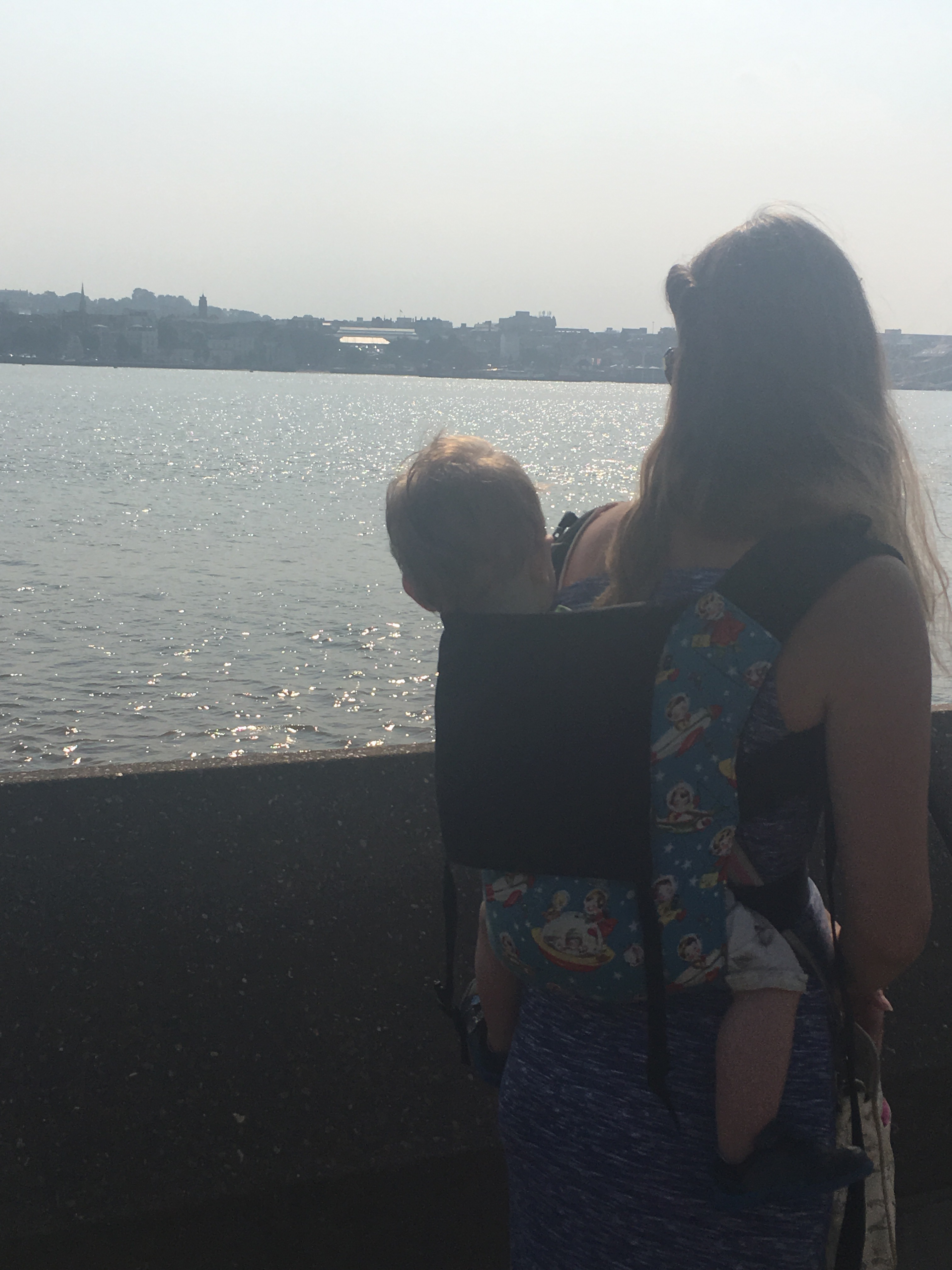 The view from Tilbury Fort…

With this in mind, we then drove on to Canvey Island for the rest of the afternoon, with the intention of going to the splash park to give Baby Lighty a play. However – and I hate to admit this – we couldn’t find the splash park!! So we headed to the water front and had a lovely long stroll along the sea wall in the stunning afternoon sun instead. Baby Lighty had his first go on the 2p drops in the arcade, although we certainly didn’t win our fortune, and we then had a cuppa and treated ourselves to chips at the little seafront cafe by the beach. It was so pleasant to sit there, the light dancing on the water, watching the world (and the ships) go by, Baby Lighty exclaiming “doggy!” every time a dog-walker passed us… We also managed to take some lovely colourful photos of Baby Lighty with the painted sea wall as the backdrop. For an unexpected, spontaneous visit after Tilbury Fort, it was really lovely just to sit and soak up this rare September sun, and we’ll definitely be back next summer (and perhaps, having since located it on a map, we’ll even go to the splash park!). 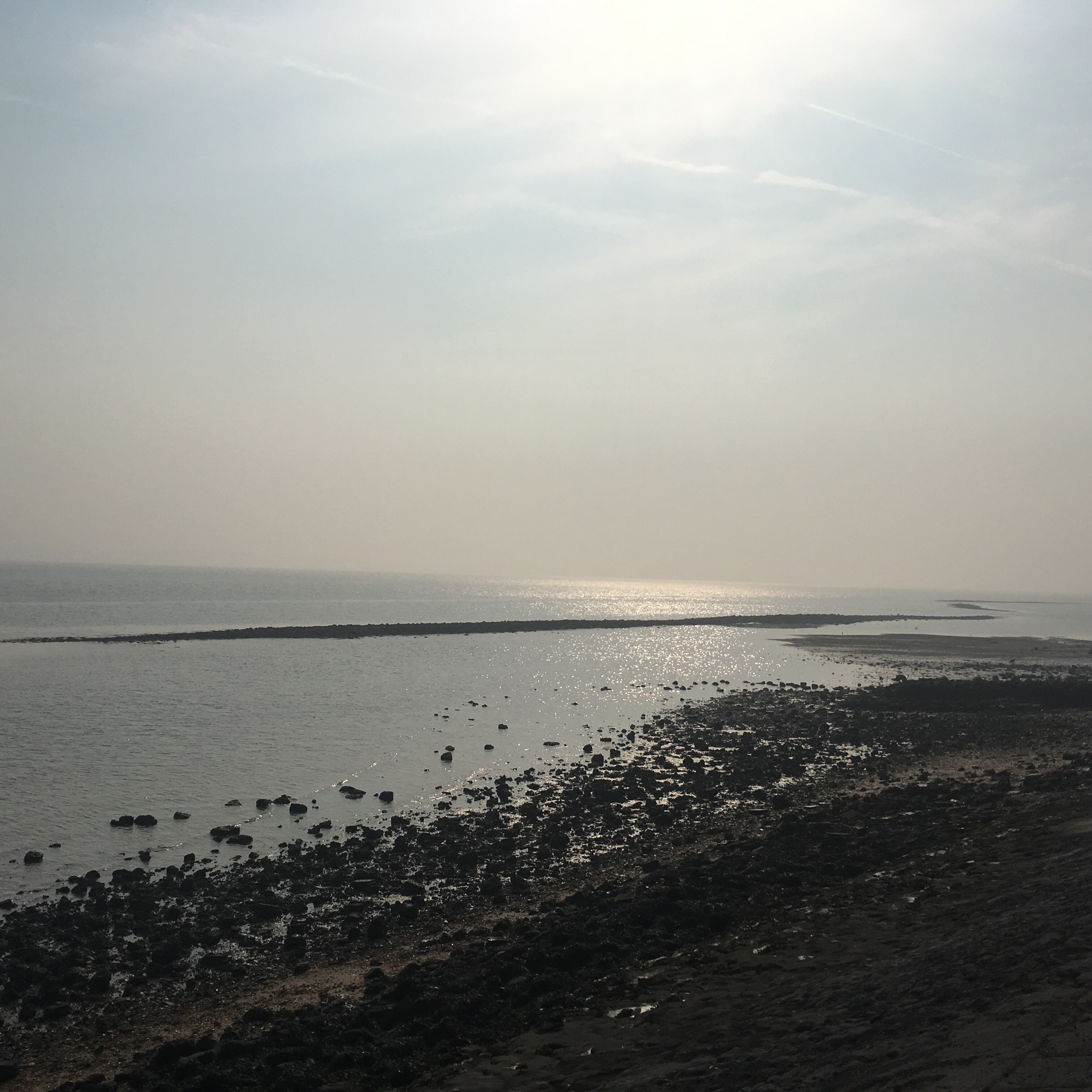 …and the view from Canvey Island! 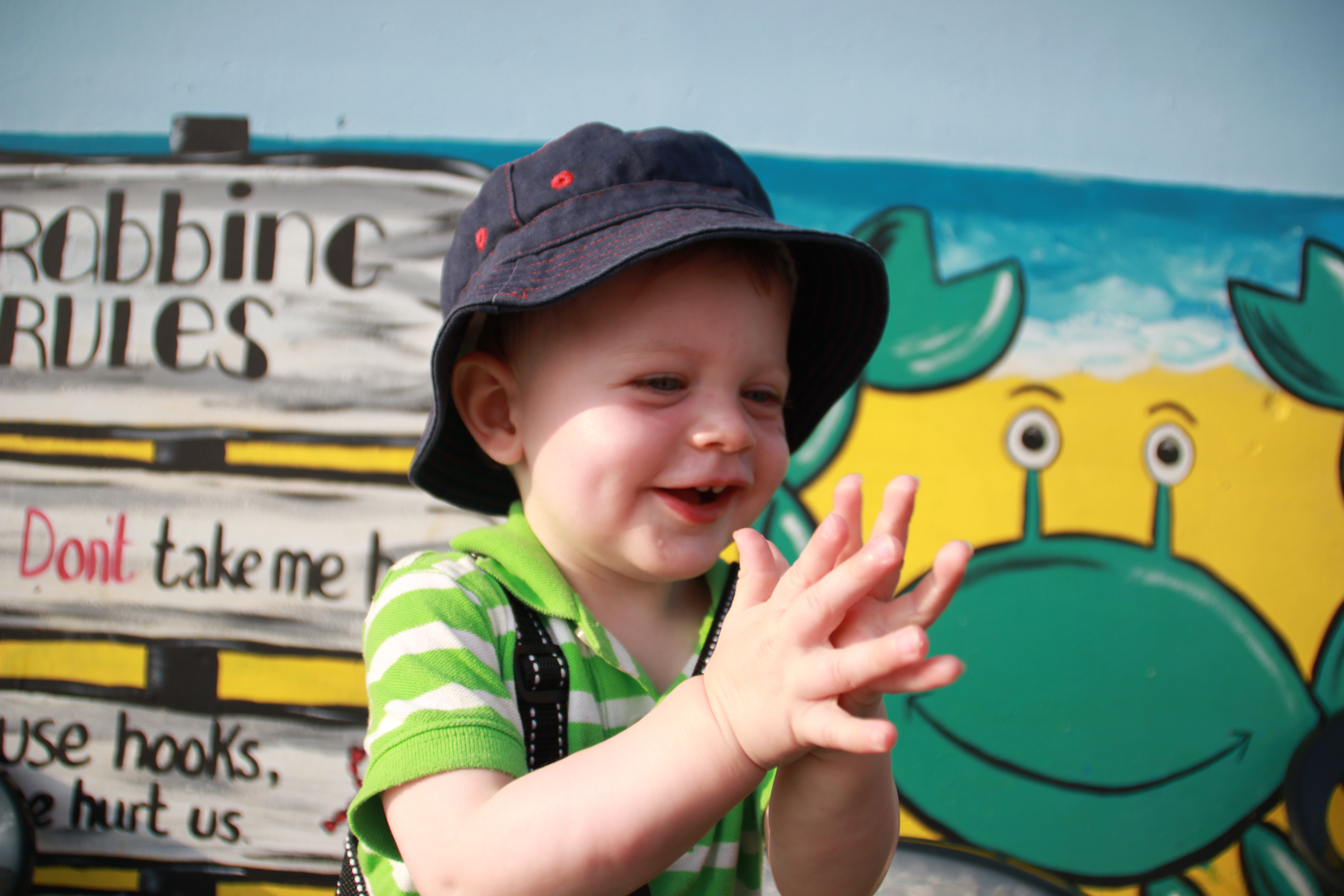 A colourful photo in front of the sea wall!

When Friday dawned grey and miserable, we were so pleased that we had made the most of the September sunshine on our previous days off. And what else is there to do on a rainy day than visit a soft play?! We’ve not really done soft play to a great extent yet, and I know that some parents absolutely dread the thought of them, but for the time being, Mr and Mrs Lighty aren’t quite there yet…we loved it! Baby Lighty had so much fun, and we’re so glad that we waited until he could walk to go to this particular one – Basildon 360 Play – as it’s huge: it’s on two levels, with a ‘big’ children’s area, complete with funky ball vacuum feature and hover ball machine (for want of better descriptions!), slides, climbing frame, a huge ball pit and access onto the top floor. Up here, there’s a smaller toddler section, as well as role play rooms, including a play restaurant, shop, vets, fire station, and a construction site complete with Lego and Mega Blocks. There’s also a messy play area, dodgems and a carousel!! What more could a one year old ask for?! Baby Lighty certainly made the most of all of the facilities it had to offer. 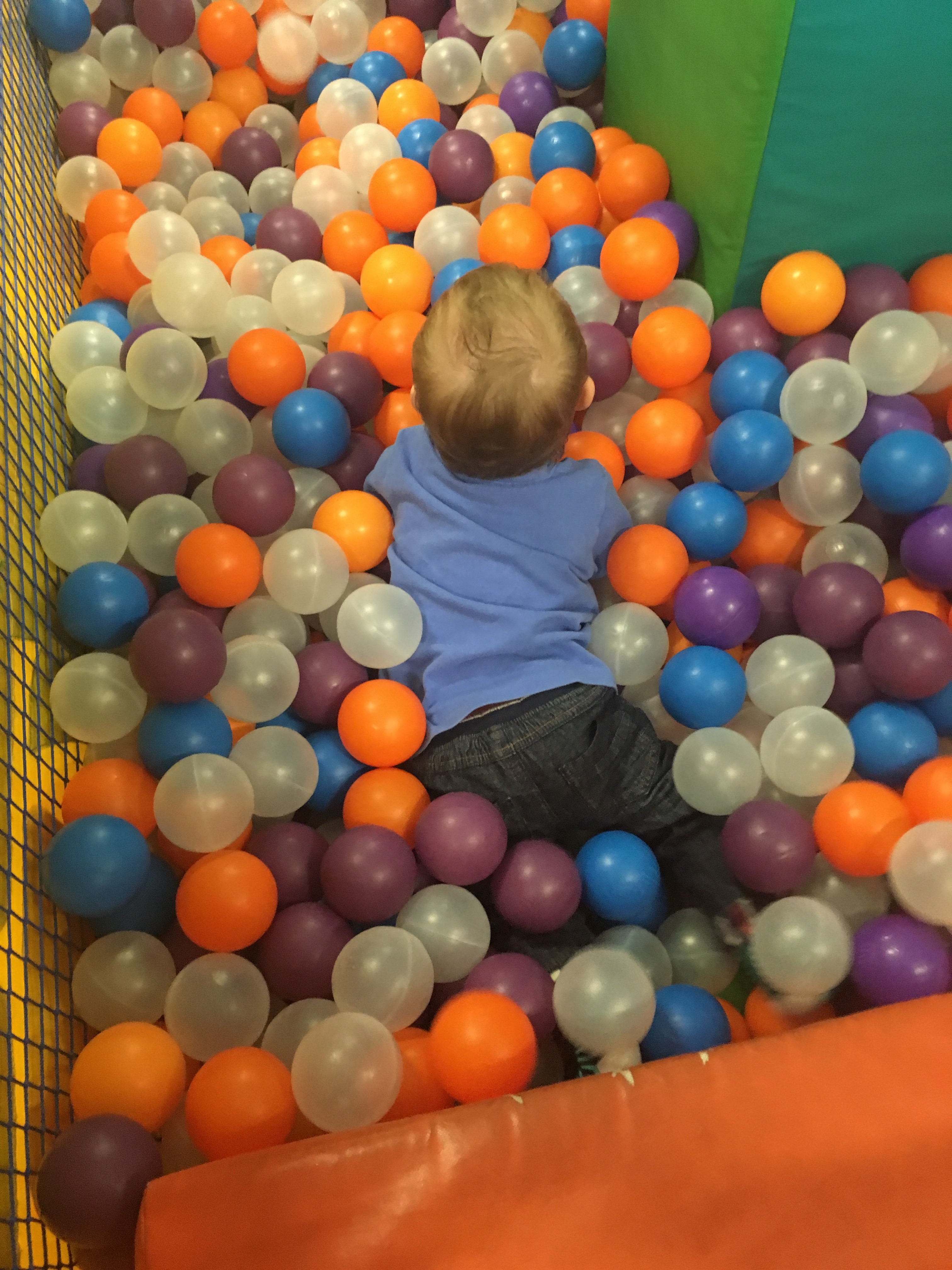 Wading through the ball pit! 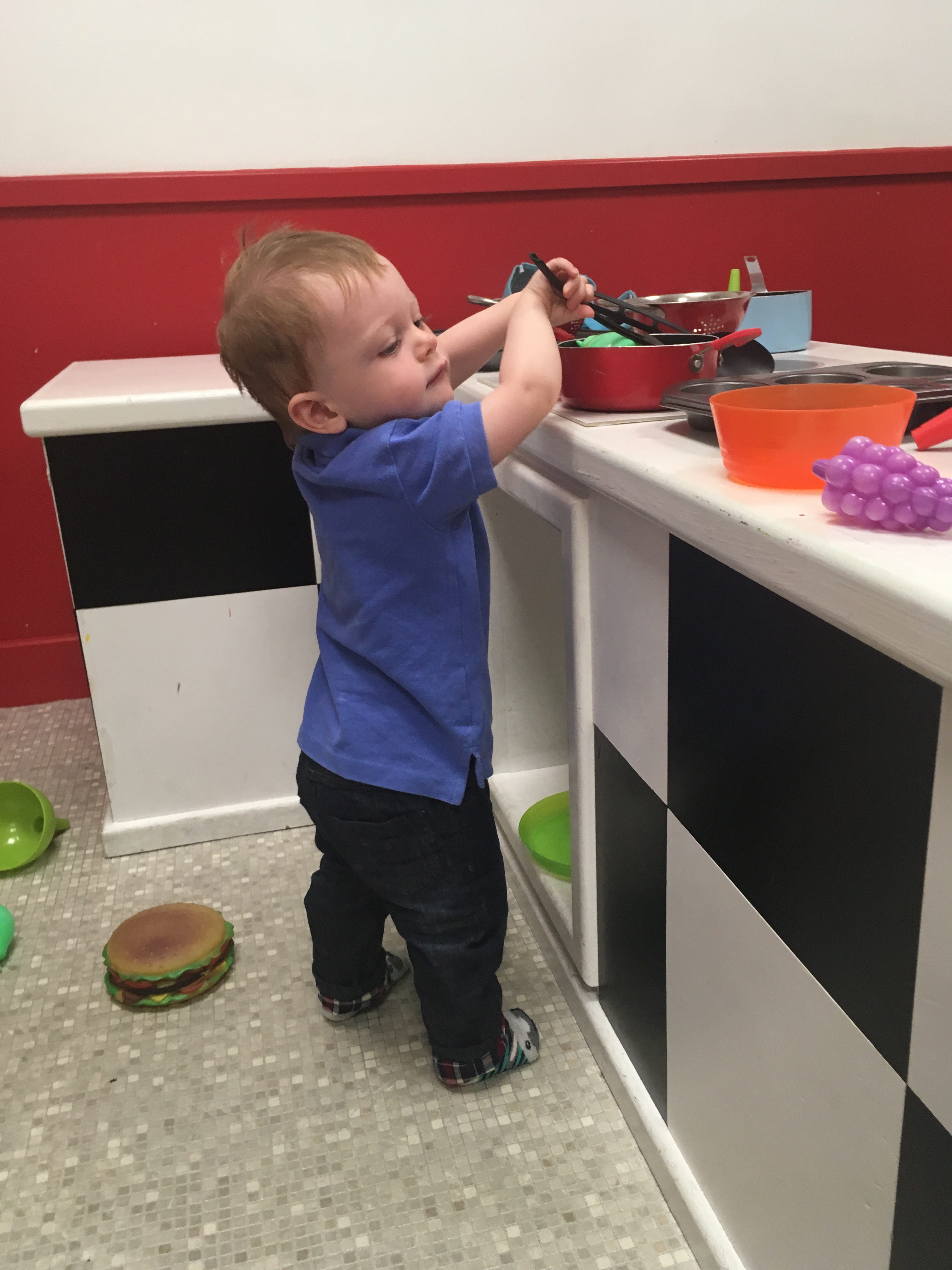 Chef Lighty cooking up a storm! 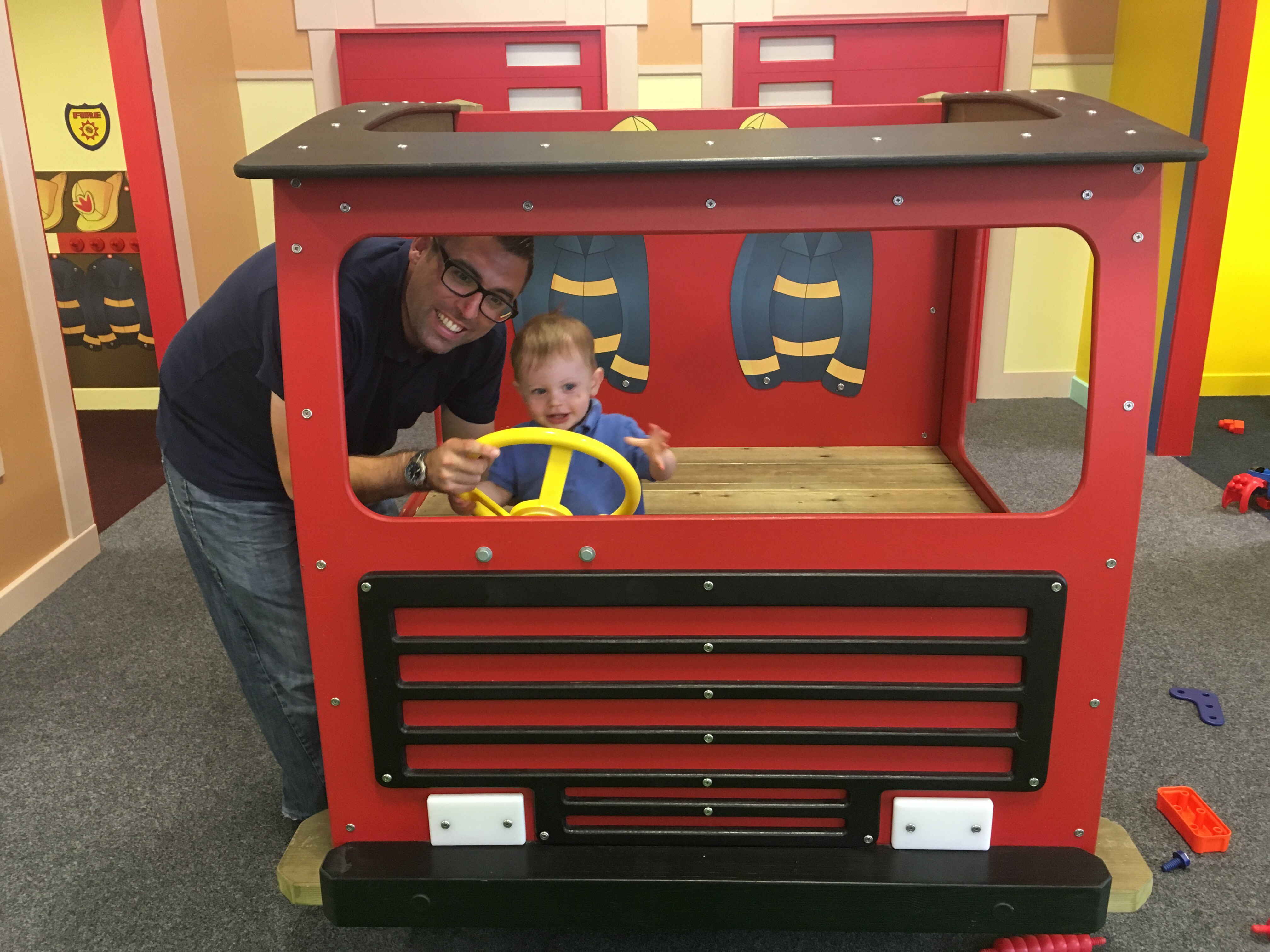 I think Mr & Mrs Lighty enjoyed it just as much as Baby Lighty!!

Needless to say that he was completely whacked afterwards and napped in the car as soon as he was in his seat! The poor child still had birthday drinks at his Godfather’s house to get through that evening (he lasted until about 9pm as he had a late nap, and we then settled him to sleep in his buggy, with him waking again at half past midnight when we decided to go home, but we’d had a pretty good innings at that point!), and his little friend’s farm themed first birthday party on the Saturday, complete with fancy dress and real-life animals! 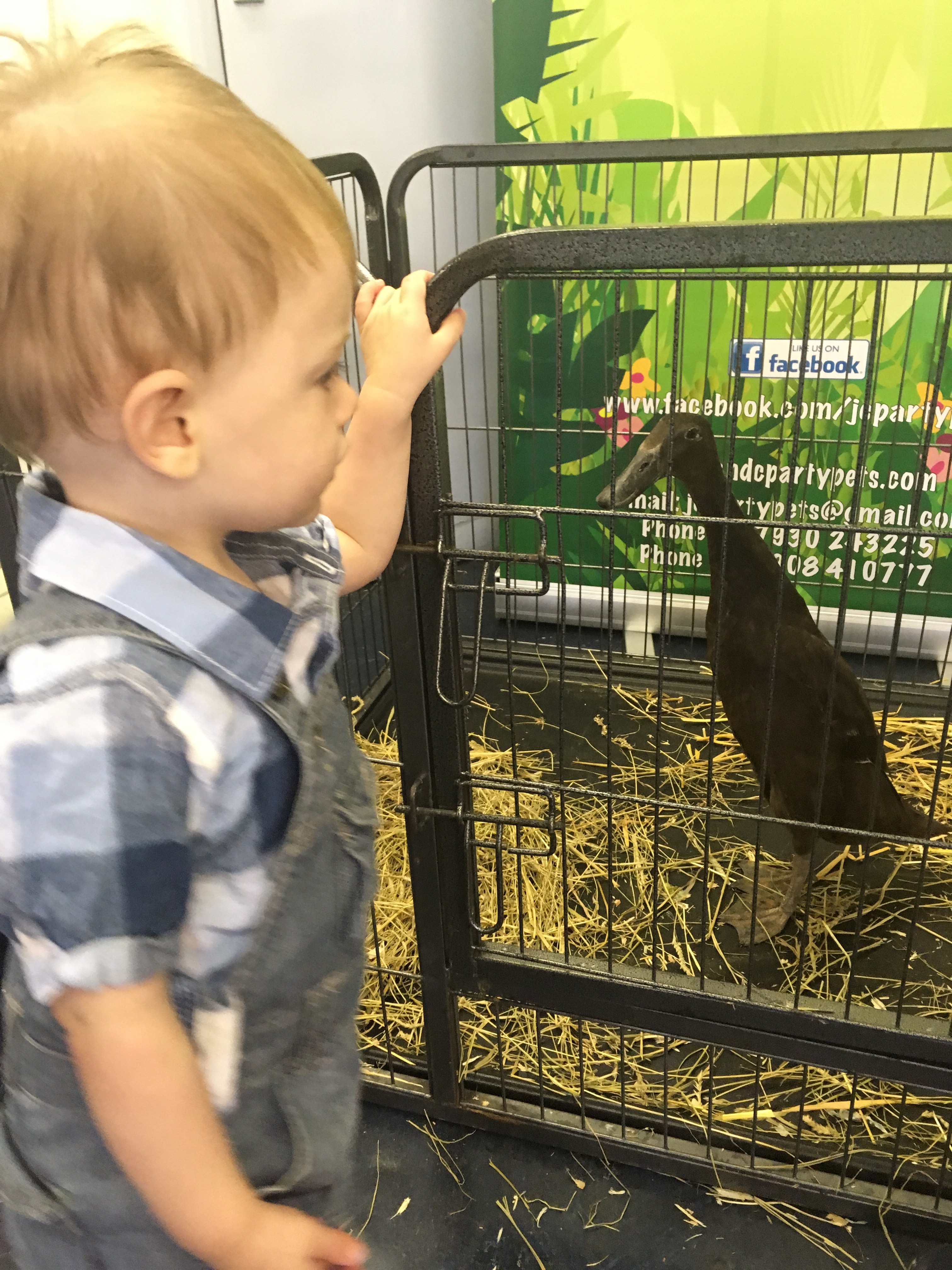 Farmer Lighty! Note he is not wearing the hat bought at the car boot sale, typical!!

We couldn’t have asked for a better, or sunnier, week off, and feel so lucky that we managed such lovely days out. Who needs to go abroad, or even away, when you’ve got such lovely visits right on your doorstep?!