Anniversaries are a funny thing in the Lighty household. I would say that, on the whole, Mr and Mrs Lighty are both fairly nostalgic creatures, yet we have differing opinions when it comes to a certain anniversary.

The Fakeiversary – as Mrs Lighty calls it – is the anniversary of when Mr and Mrs Lighty officially got together, which happens to be 14 years ago today. 14 years! Yes, we must’ve been mere children when we met, I know!! Many of you will know the story of how Mr and Mrs Lighty met; for those of you that don’t, all I’ll say is that it involves a trip to Ibiza and another to our local branch of BHS’ canteen. You couldn’t get two more different locations if you tried!!

But nevertheless, 14 years ago today, we were sat opposite each other around the plastic table in the outdated canteen, nerves stopping us from eating the chips and doughnuts (healthy beings that we were at 18!!) we’d ordered. I didn’t know it then, but that day was to change the course of our lives (and when BHS closed its doors recently, I even tried to persuade Mr Lighty that we should buy two of the canteen chairs for our home for nostalgia’s sake, but his response to that was about as favourable as his response is to the Fakeiversary). 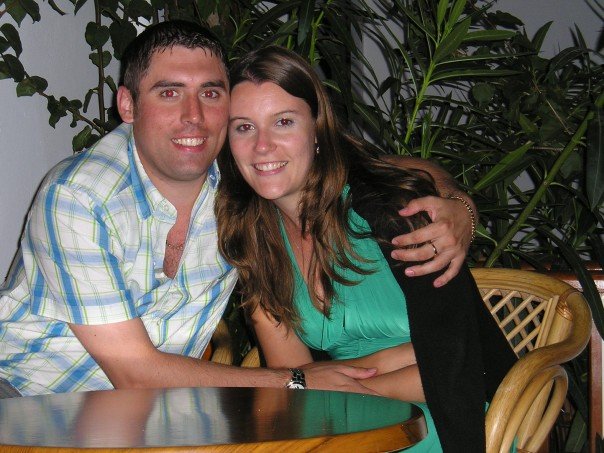 A photo not quite from when we first met, but from not long after (mainly because Mr and Mrs Lighty are old, and the ones from when we first met are on old fashioned film, which is in the loft, and asking Mr Lighty to go up into the loft to find them for me would be harder than getting him to celebrate the Fakeiversary, quite frankly). How long my hair is, and how fresh faced Mr Lighty looks!

So 14 years we’ve been together. Surely something to celebrate, you’d think? Some marriages don’t last even half that long, so yes, yes Mrs Lighty does think that we should be celebrating. If not celebrating, then a cheap card and a bunch of petrol station flowers wouldn’t go amiss.

But this is where Mr and Mrs Lighty differ: Mr Lighty says that we shouldn’t be celebrating the Fakeiversary! That once you’re married, anniversary times reset themselves, and you’re only supposed to celebrate your wedding anniversary! But then where does that leave those 9 years before marriage? Do they count for nothing, even though they saw us through a long distance relationship while I was on my year abroad in Austria, a first home purchase and an engagement?

We’re nostalgic for all of these things – and more – and talk about them regularly. We have really fond memories of being young and carefree, of buying and doing up our first tiny home together, of holidays abroad as a couple and getting engaged in Germany. So why not extend that nostalgia to celebrating the day we got together too?!

Well, you’ll have to ask Mr Lighty for his reasonings behind that, but in the meantime this is my way of marking the occasion (as has so often become the case nowadays, if you can’t beat them, blog about it!) and saying Happy Fakeiversary, Mr Lighty! I can’t believe you’ve put up with me for this long!

Oh and perhaps this blog post will also serve as the kick up the backside that you need to allow me to celebrate next year’s Fakeiversary, as it’s a big one?!