Ah the magical first trimester…full of tiredness, morning sickness and worry, right? Well, yeah, to be honest, it probably is.

I don’t think Mrs Lighty will ever get over that nauseous feeling which still today means that I can’t face certain foods (and there’s even a dress that I can’t wear, as I wore it for the first time when I was six weeks pregnant – just as I was first feeling sick!). Nor will I forget the all consuming tiredness which saw me wanting to nap at my desk in the middle of the day, or the crippling worry that I was imagining my pregnancy. But do you know what? I also won’t forget that magical, ever-so-special feeling that I was lucky enough to be in the first trimester at all.

You see, I know most mummies-to-be will say that they enjoyed the second trimester the most – and don’t get me wrong, I loved having a really cute little Baby Lighty bump to start showing off – but for me, the first trimester was the charm. And as today is the anniversary of our first scan, I want to capture those memories in case I ever forget them.

The beautiful flowers that Mr Lighty bought Mrs Lighty when we first found out that Baby Lighty was on his way!

There was just something so special about only a handful of people knowing that Baby Lighty was on his way. It felt like our wonderful little secret, our own little bubble. Time did, however, seem to come to a standstill; when you’re waiting for that first scan to make sure that everything is ok, every day is a step closer to your goal, every pregnancy symptom counts as both a worry and a joy. Mr Lighty and I even managed four little weekends away in those first twelve weeks, and yet time still seemed to creep by.

But eventually the date of our first scan arrived: 26th November 2014. It was easily one of the best days of my life, ranked alongside our wedding day (but with less alcohol!) and Baby Lighty’s birth (but less tiring!). I don’t think Mr Lighty and I had ever been that nervous before. We were dreading getting to the hospital to find that we’d dreamt the whole thing up. I can remember thinking that the sonographer would laugh at me for daring to think that I could possibly be pregnant.

So I will never forget, therefore, the moment when Mr Lighty glanced at the screen in the scan room and gave a little laugh of delight. “Can you see it?” I asked, and when he said yes, the sonographer turned the screen round so that I, too, could see it.

It. Our baby. Our very own baby! And that’s when the tears of joy began to roll down my cheeks.

I floated to work that afternoon, texting the scan picture to the immediate family that knew about Baby Lighty’s presence already. Sending the email round to tell my colleagues my news was wonderful; I think one of the reasons that the first trimester seemed to take its time was that we didn’t want to tell anyone but immediate family until after the first scan. We’d already decided that if people guessed we’d be honest with them, but no one actually confronted us. So imagine my surprise when three of my female work friends said they’d already guessed! Apparently my ‘second breakfast’ and burgeoning bump were dead giveaways! Later on that day one of my colleagues asked me what the date was, and when I told him, he replied “You’ll always remember that date as scan day”, and I’m pretty sure that he will be right about that.

The thing that marked the end of the first trimester was also something that we’d dreamed about for many months: the pregnancy announcement. Before I fell pregnant, we’d discussed not putting our news on Facebook until after the 20 week anomaly scan, just in case all was not well. But when it came down to it, a combination of the time of year that we were making the announcement, our own excitement and the fact that we were worried that someone else would announce our news before we got a chance to do so ourselves meant that we decided to reveal all to social media earlier than we first thought.

I’ve never wanted to post the scan photo; I don’t know why, but I have a weird feeling about putting a photo up for the world to see before the baby has even arrived in the world, and that’s why I’ve not included the picture in this blog. Instead, I’ll leave you with our very special pregnancy announcement below. As you already know, Mrs Lighty is a Pinterest addict, and after a little bit of searching, we staged our own festive photoshoot to produce one of my favourite photos ever. I even had some printed to go into the Christmas cards of friends and relatives that aren’t on Facebook! 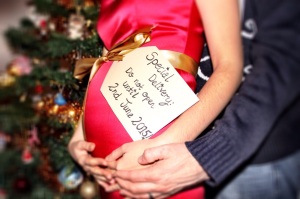 Our very special announcement that we made at Christmas last year!

The first trimester and Baby Lighty’s healthy scan really was the best Christmas present that Mr and Mrs Lighty could have asked for. So ladies, please try to enjoy the first trimester, as looking back it goes by in the blink of an eye – even if it feels like time is standing still at the time!

15 thoughts on “The First Trimester’s the Charm”