It doesn’t matter where Baby and Mrs Lighty go, if there is a play kitchen there, Baby Lighty will find it and he will play with it. It’s no surprise to hear, therefore, that this was at the top of the list of gifts we asked Father Christmas for on his behalf. He loves all kinds of imaginative play, but when it comes to real baking, well, at 18 months in, I must admit that I haven’t done any with him so far. So when it did come to that all important first bake, why not make it festive, I thought?!

Especially so, when I saw the fabulously easy recipe for slow cooker fudge by Pink Pear Bear. I mean, it only had two ingredients, what could possibly go wrong?!

Well to start with, remembering that most sprinkles have wheat in them, 15 minutes after walking home from the shops. Not good for gluten free Mrs Lighty. And yep, the sprinkles I’d picked up were the wheaty kind. But that was ok, I’d just make sure that not all of the fudge was covered in sprinkles, so that I could ‘test’ some of it. You know, just to make sure it was edible.

What else could possibly go wrong with two ingredients plus wheaty sprinkles? Forgetting to buy grease proof paper, that’s what. But that was ok too, we’d use one of Mr Lighty’s super-duper special cheesecake tins with the bottom that you push upwards so as to easily remove the contents.

Off we set, therefore, Baby Lighty and I. At first I sat Baby Lighty in his highchair because I wasn’t quite sure I trusted him to be steady enough to just stand on a kitchen chair. But that did mean that when I was asking him to put the broken pieces of chocolate into the slow cooker, he couldn’t reach in and therefore decided that the next best thing he could go was to just sit and eat the chocolate. 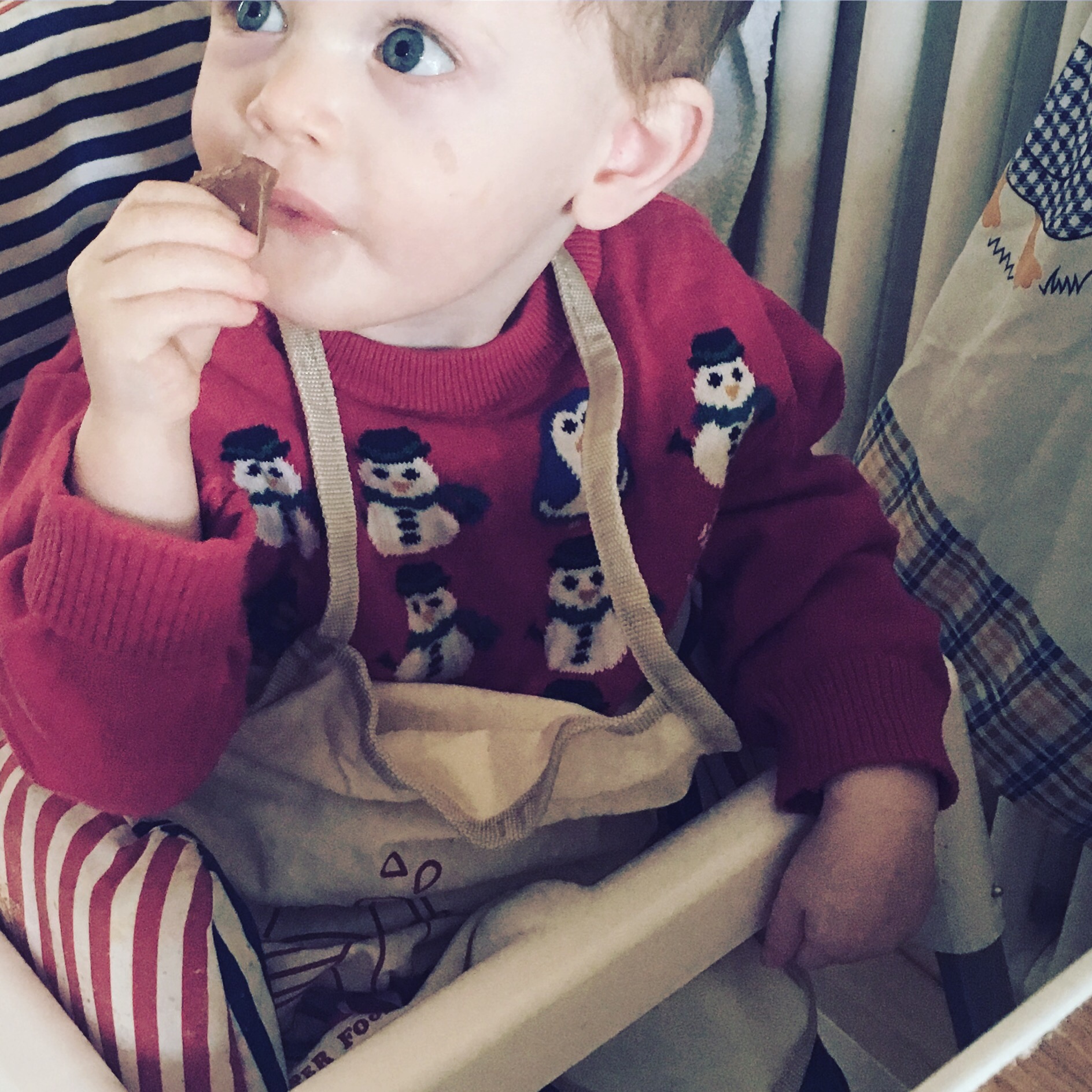 “Why make fudge when you can just eat the chocolate, Mummy?!”

Hmmm. This meant that if I wanted him to actually get the full baking experience, I’d have to let him stand on a chair. One of the rickety old chairs, one that is part of the hand-me-down set from my parents that was given to them as a wedding present. But that would be ok, I’d just hold on to him while I stirred with the other hand. 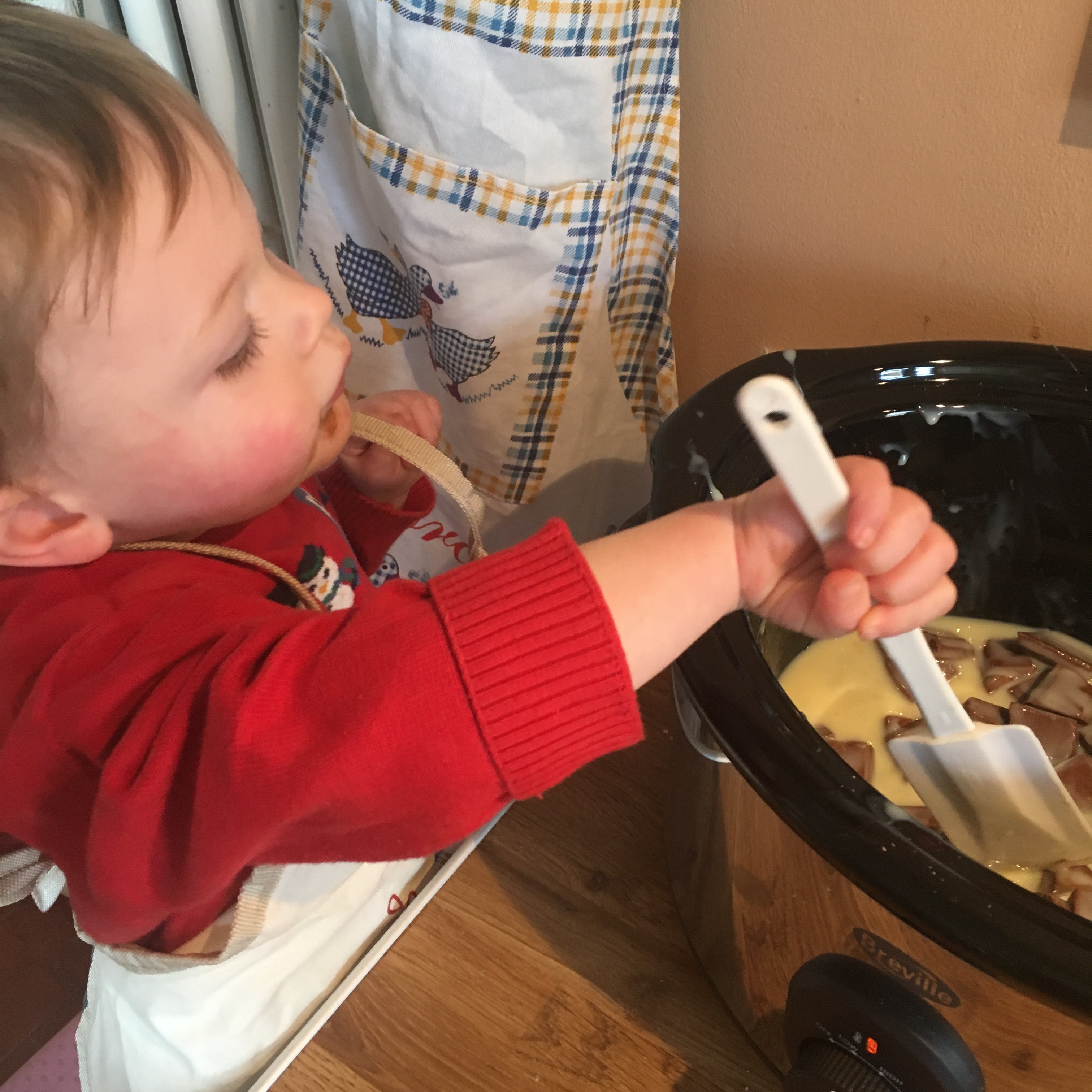 Then I realised that I hadn’t thought through the fact that slow cookers get quite hot. And Baby Lighty still wasn’t quite tall enough to properly reach over the top of it, even standing on a rickety old chair. And so I had to make the decision to let him stir the mixture until the pot started to get hot. This actually worked well, he quite happily stood there for a good ten minutes or so, stirring the chocolate and condensed milk. He was even singing a little tune to himself as he mixed!! And he wasn’t stood there long enough so as to get bored. It just meant that for the two hours that followed after that, I had to make sure to keep stirring it every ten minutes or so until it was finally done.

And what did it need once it was finally done? Those blooming sprinkles of course. And Baby Lighty could help me with this bit, too. Guiding his hand, the two of us sprinkled a reasonable amount onto his very first bake before leaving the fudge to set. You could see from his little face that he was so pleased with himself. So pleased, in fact, that he decided to pick up the whole pot of sprinkles as I popped it on the side and dump the whole lot of them on the fudge. Oops. 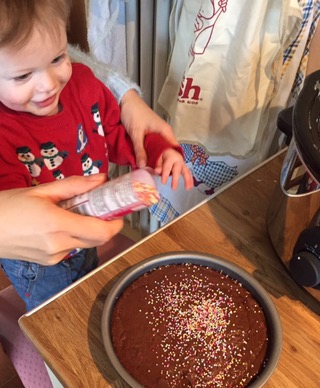 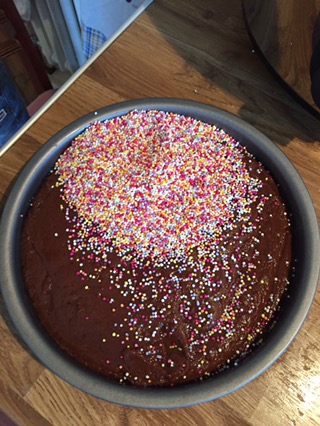 But, I have to say, that once as many of the unnecessary extra sprinkles had been extracted from the top and the fudge had been left to set, Mrs Lighty remarked to Mr Lighty that it tasted yummy! Who knew Mrs Lighty could actually cook something edible?!

But, as Mr Lighty pointed out, this wasn’t something that Mrs Lighty had cooked. It was Baby Lighty’s festive first bake. And that was the magic ingredient.

For the full recipe for slow cooker fudge from Pink Pear Bear, click here. Alternatively, watch the video on her YouTube channel:

46 thoughts on “A Festive First Bake”