The last time we went to Disneyland Paris, Mrs Lighty was eleven weeks pregnant. We hadn’t even met our little chappy on the dating scan, let alone in person. It was an exciting trip, as we dared to hope and dream that one day in the not too distant future, we’d be bringing our newest addition of the family along with us.

So when we booked a trip to Disneyland Paris for our traditional New Year family holiday, we were super excited. As excited as a kid in Disneyland, you could say. And the closer it got to the day of our departure, the more excited Baby Lighty was too. The first thing he said when we woke him up super early, ready to start our long drive to Paris, was “We going to Mickey Mouse house!”, whilst jumping up and down on his bed! 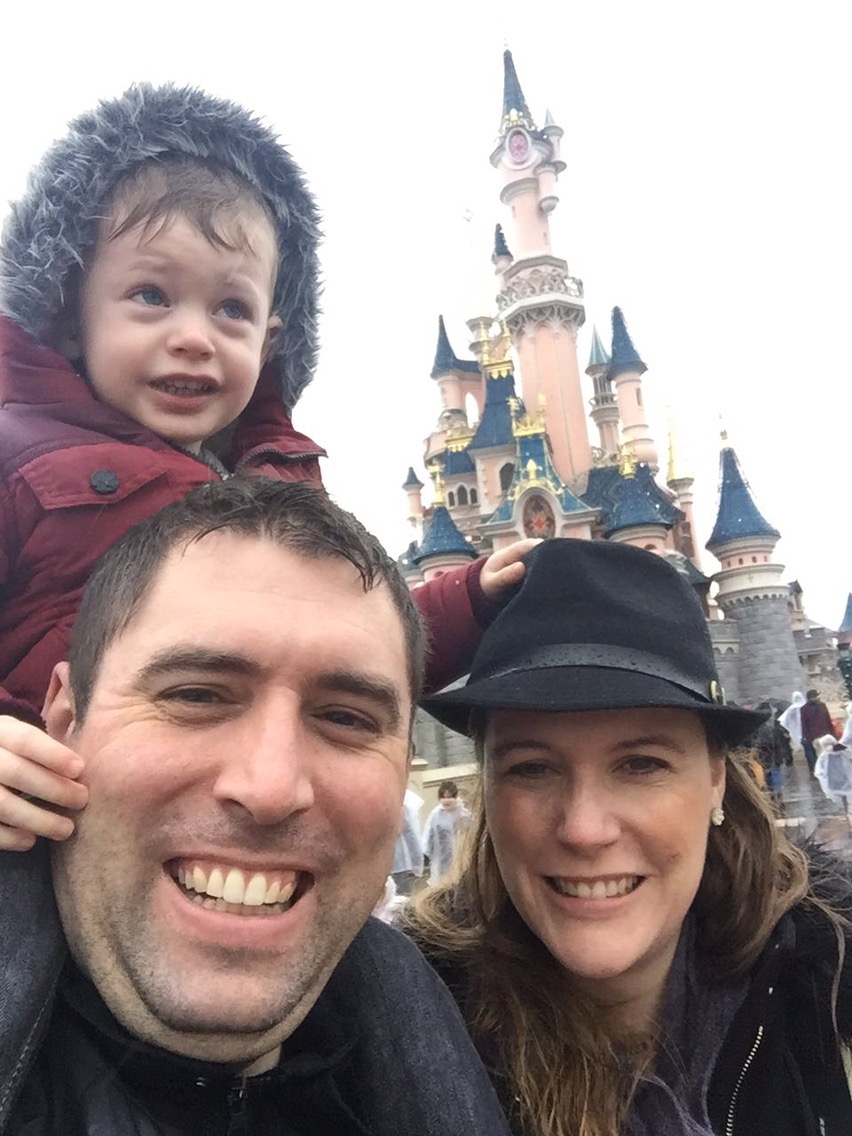 After a long journey and a slightly muddled check in at Disney’s Hotel New York, we headed straight for the parks. We were lucky enough to catch the parade on our arrival, but as we were late to nab a spot, we didn’t have the best of views. However, even this small glimpse of the parade was enough to pique Baby Lighty’s excitement, and when we told him we were going to go on a ride next, he was practically bouncing up and down with joy! And what better introduction to Disneyland Paris’ rides than It’s a Small World?!

His little face was completely full of wonder as we sat surrounded by the cute dolls singing a slightly odd song in a variety of languages. And I guess a face full of wonder is hardly surprising; I mean, it must be a bit odd to the first time rider!! To be honest, the look of wonder was the look that we’d hoped for from the minute we booked the trip. That look of ‘wow’, and those little eyes wide with all the new things that they could see all around them, was the look we’d hoped for since our last visit. Since I was 11 weeks’ pregnant. 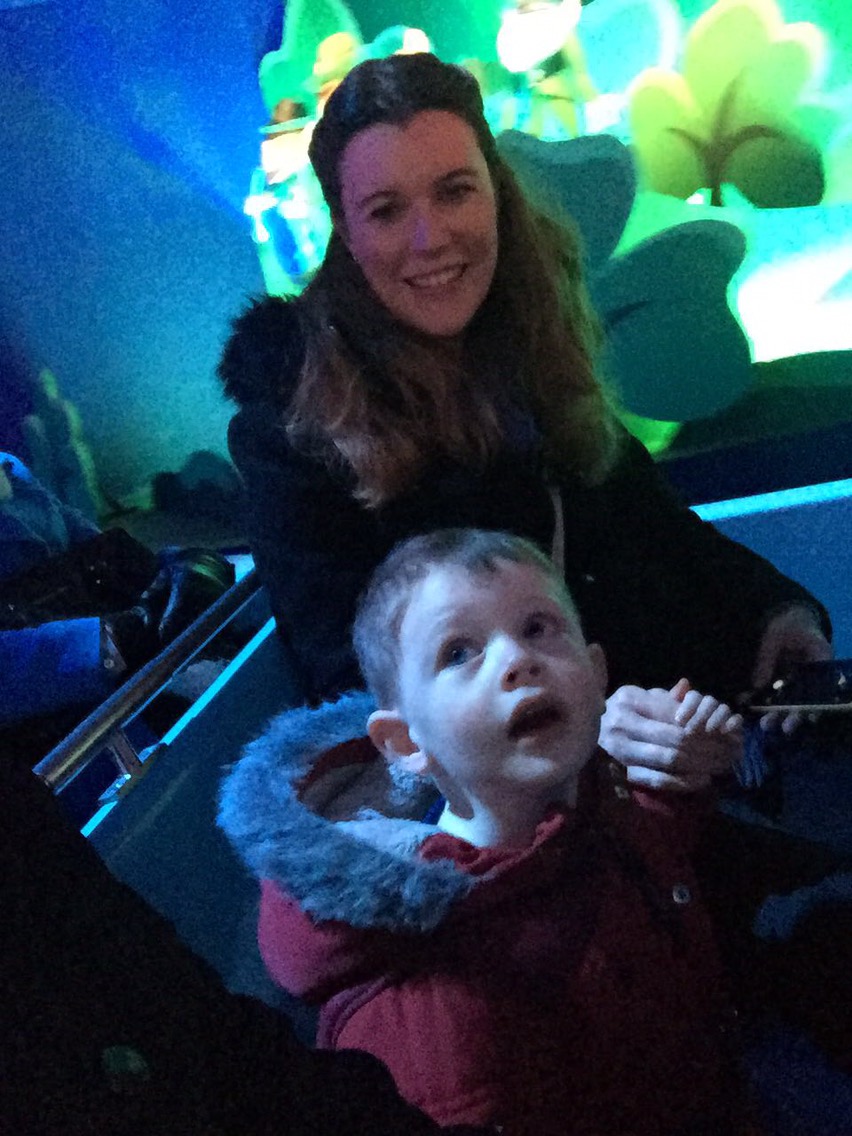 That face! I love the way he’s holding my hand too!

And I think that first day, a day of firsts for Baby Lighty, encapsulated some of the hoped-for Disney excitement. There was even a first for Mr and Mrs Lighty, as we got to eat in Captain Jack’s (formally the Blue Lagoon) for the first time! This was a restaurant that we’d always wanted to eat in, and it didn’t disappoint us. Baby Lighty loved it too, with the waiting staff instilling in him that his dinner was a pirate’s dinner, which of course meant that it was wolfed down in about thirty seconds flat!

After refuelling with our pirates’ dinner, Baby Lighty managed to stay up to see the Disney Dreams Illuminations, and then we retired to our room at the New York Hotel. We don’t normally stay on site at Disney, so it was lovely to be able to wander back home at the end of the day and not have to jump on the train. On this occasion, we were lucky enough that because my Aunty and Uncle Tempy are members of the Disney Vacation Club, they kindly paid for us to stay on site, something which we’re so grateful to them for.

However, the next morning it seemed like some of the Disney magic had lost its shine; maybe just with little things, but things that dampened our excitement a bit. Little things like the fact that we queued to see Donald Duck for half an hour, Baby Lighty’s favourite character, before a cast member told us that he was changing shifts and being replaced with Scrooge (they used to have someone stand at the end of the queue to stop people joining unnecessarily, or rope it off, but this didn’t seem to be happening on this visit). Luckily, we don’t think Baby Lighty noticed the difference between the two characters.

And then there were the bigger things such as the carelessness shown towards our belongings by the hotel housekeeping service. Carelessness to the point where Baby Lighty’s favourite toy dog was caught up in the bed sheets, accidentally carted off to the laundry and was not found before we came home (any parent whose child has a favourite soft toy will know the heartache this can cause!). It has to be said, the head of housekeeping couldn’t have been nicer or more apologetic about the situation, and gave Baby Lighty a soft toy soldier as a replacement, before admitting that as a parent herself, she knows there is no replacement for a favourite soft toy. Moral of this story? If your child snuggles into bed with you of a morning whilst staying in a hotel, make sure you move their teddies somewhere safe before housekeeping come in!

Having said all of this, we still had a lovely day. Baby Lighty’s reactions made us laugh so much! He was absolutely desperate to see Jack Skellington for some reason, and we found him in Frontierland. I was so surprised at how confident he was with this character! I mean, we love Jack, but he’s not the most cuddly of characters now, is he?! Jack asked him what his name was, and Baby Lighty duly told him, then Jack asked if he knew what his name was. Baby Lighty replied, bold as brass, “Yes it Jack Skellington!”, before going on to ask where Jack’s pumpkins were!! 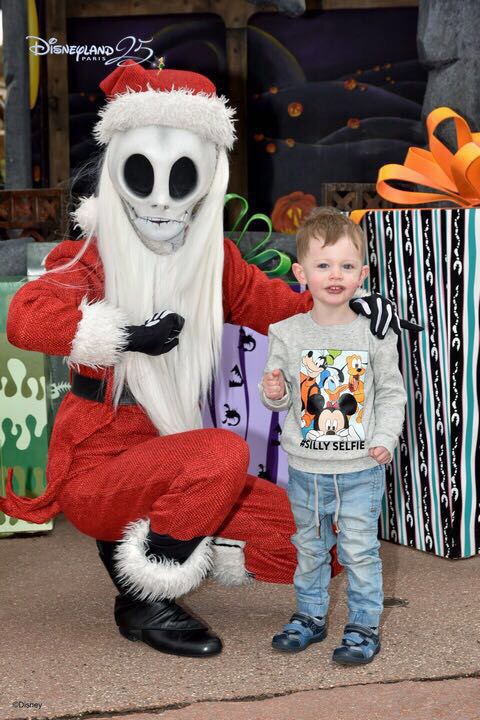 With one of his faves, Jack Skellington!

And a little something that did happened to restore our faith in the Disney magic: when Baby Lighty fell asleep in the sling in the queue for the Peter Pan ride, a cast member kindly gave us a voucher for ‘baby swap’. This is a scheme which is designed for parents who have no one else with them to care for small children; one parent queues whilst the other one stays with the child. When the first parent disembarks the ride, they ask a cast member if they can do the ‘baby swap’, whereby the parent that’s waiting with the child is able to go on the ride themselves without queuing. By giving us a baby swap voucher, it meant that Mr Lighty and Baby Lighty didn’t miss out on the ride they’d queued 40 minutes for, and it also gave the rest of us an opportunity to go on the ride again. 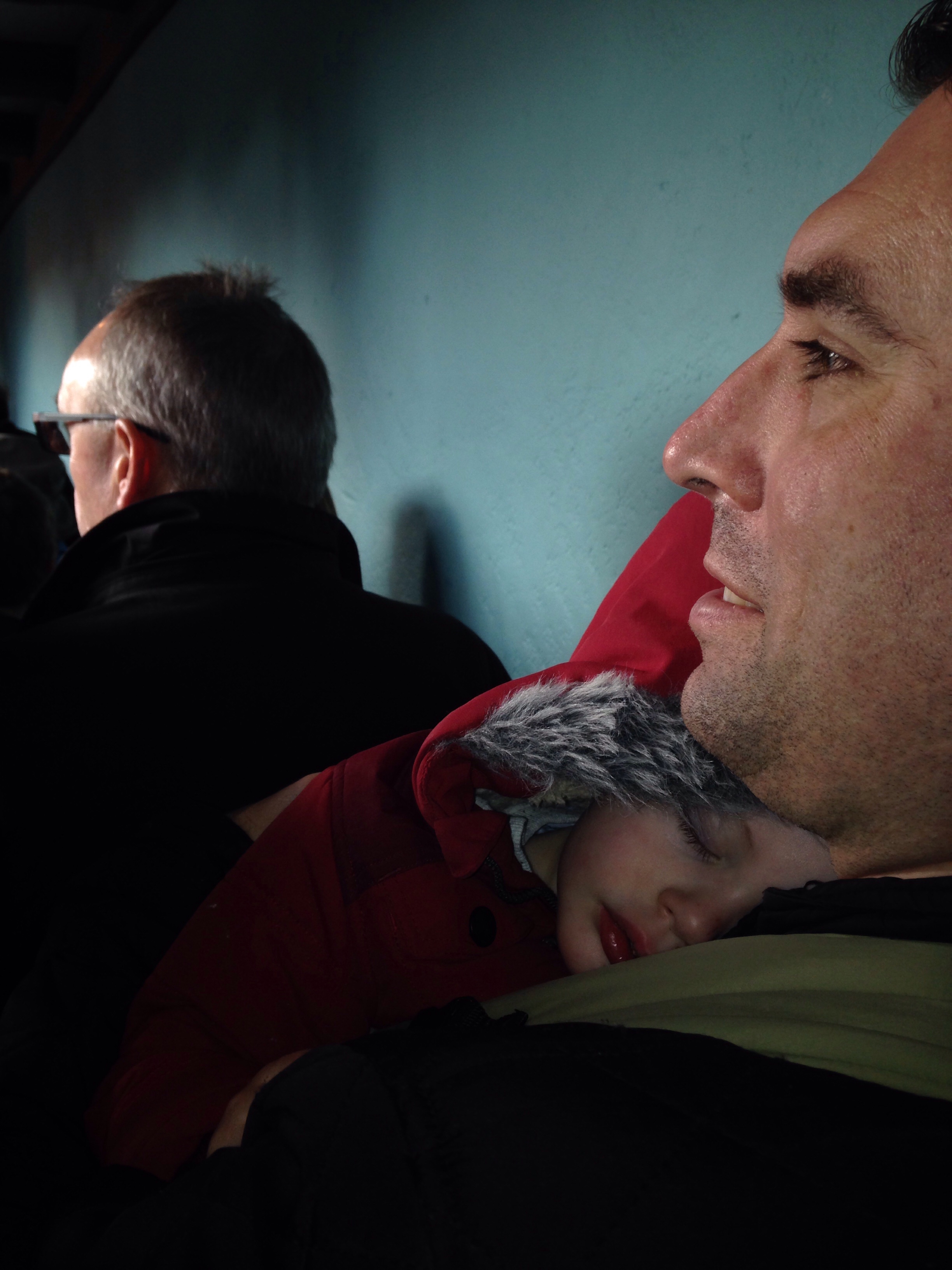 When queuing becomes too much…

This day was also New Year’s Eve, and that night, suited and booted (with Baby Lighty in the cutest bow tie and shirt covered in Mickey Mouses), we enjoyed our New Year’s Eve dinner in the Rainforest Cafe. Baby Lighty’s adorability continued when he proceeded to eat his burger like a miniature grown up! 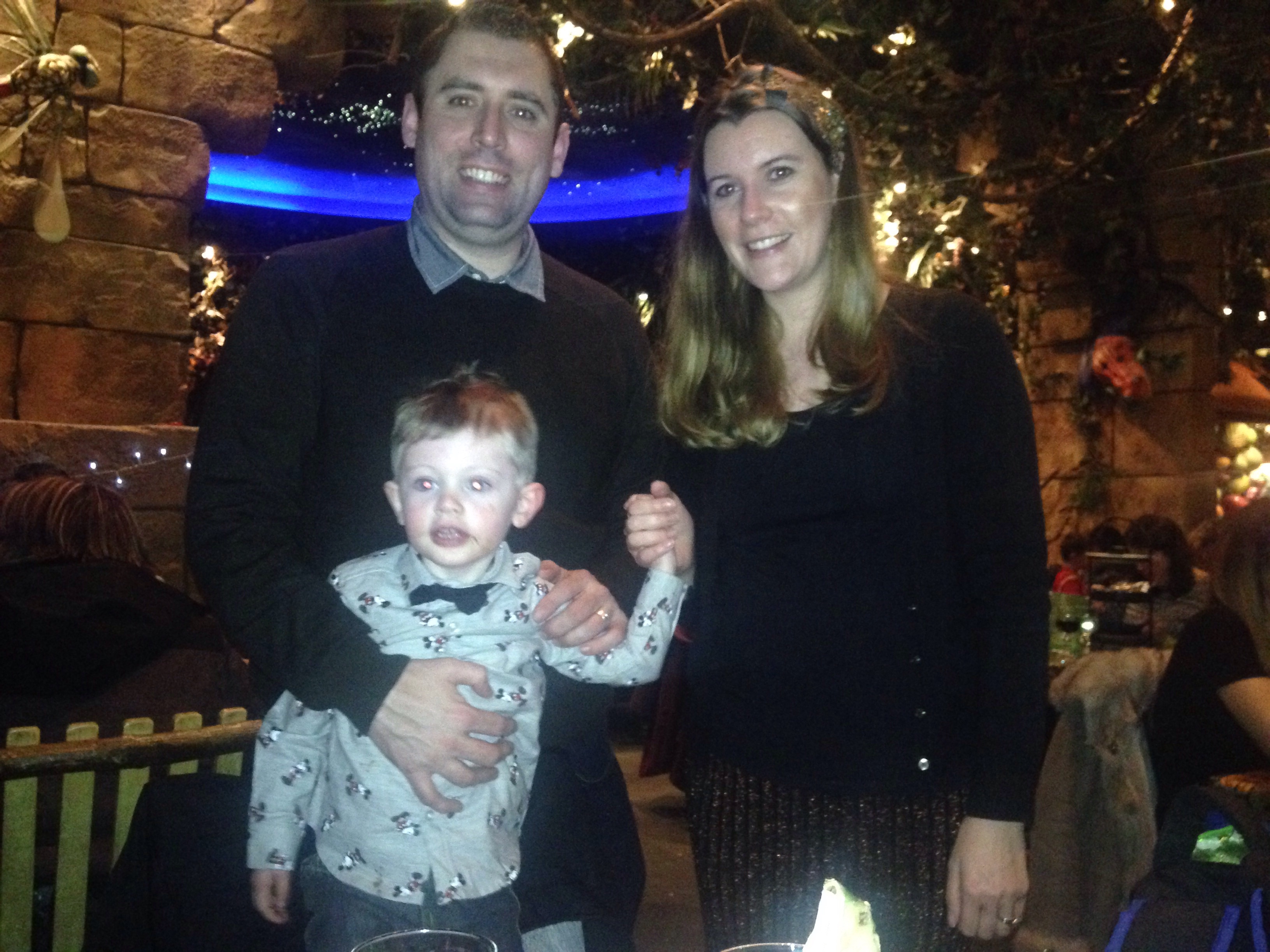 Back in the park that night, after another first, a brief encounter with a jellyfish in a parade in the village, we somehow managed to get a front row position for the New Year’s Eve fireworks! This did mean standing for an hour and a half, with Baby Lighty asleep in the sling until shortly before the fireworks started, but all good things come to those who wait!! There is definitely something magical about seeing in the New Year in Disneyland. This was our second New Year we’d seen in there, and it was also the first New Year that Baby Lighty had seen in awake! 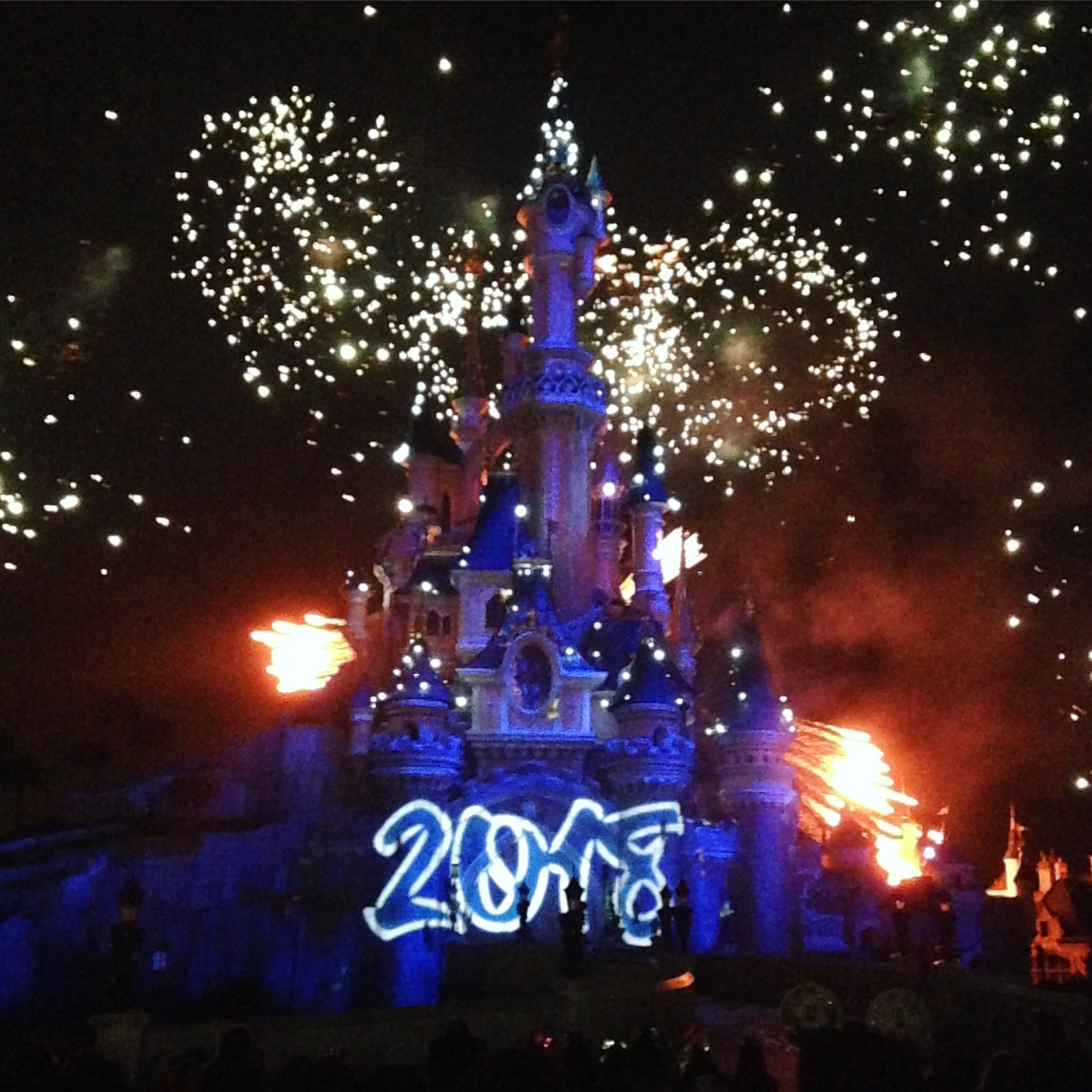 On New Year’s Day, our last day at Disney, the weather couldn’t have been more against us if it tried. It poured down with rain. all. day. long!! Because of this, we decided that we ought to head indoors pretty quickly, so joined the queue to see the main man himself, Mickey Mouse. Mr Lighty said one of the things he was most looking forward to was seeing Baby Lighty meet Mickey for the first time. Unfortunately, the attitude of one of the cast members towards Baby Lighty holding up the queue by dropping his autograph book and stopping to pick it up marred the magic a bit. However, Baby Lighty’s reaction to Mickey didn’t disappoint! We could tell he was a little bit shy, and a little bit starstruck, as he went extremely quiet (unheard of for him!). He looked so cute as he waited for Mickey to write in his autograph book, stood there nervously fiddling with his cardigan as he waited. He did, however, find his voice enough to ask Mickey, “where your doggy Pluto gone?” I loved seeing his belief in all the characters! 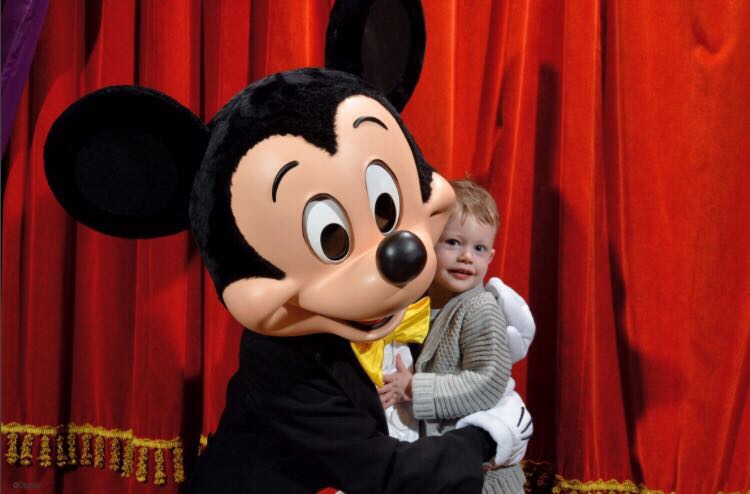 I have to say, that taking a two year old to Disneyland is obviously not conducive to staying within routine. We’re not massive sticklers for routine, but we do like to get Baby Lighty to nap at some point during the day if possible, rather than having a cranky toddler on our hands. Later on during New Year’s Day, Baby Lighty’s nap proved to be one of the funnier memories we made at Disneyland. Whilst waiting in a queue for a show, Baby Lighty started to fall asleep on Mr Lighty’s shoulders. We promptly popped him in the sling, so that he could manage a little snooze. The poor child woke up literally in the middle of Armageddon!! I thought he’d be scared – after all, it’s not every day you wake up to massive explosions in outer space – but his response was classic Baby Lighty: all he said was, “That very hot and noisy! We not going on ride now?” It made us laugh so much that not only did he take waking up in Armageddon in his stride, but also didn’t realise that he’d woken up on the ride!

And I think the laughs and memories are really what made this trip for us; it certainly wasn’t without its disappointments, but seeing Baby Lighty’s reaction to things made it worthwhile. For example, seeing his Great Uncle Tempy, or Burpyface as Stitch named him, on the big screen during Stitch Live had him in fits of giggles, and we loved seeing his reaction to the rides; Pirates of the Caribbean was a bit too scary, but it turned out he’s a little speed demon in the form of the Slinky Dog rollercoaster!

As we’ve renewed out annual passes, I’m sure we’ll be back for more this year. I’m hoping that although this wasn’t my ultimate, perfect Disney experience, we’ll be able to make more memories on future trips which will make up for it. We may not have had the perfect first trip to Disneyland as a family, but we’ll hopefully have more perfect firsts there in future. 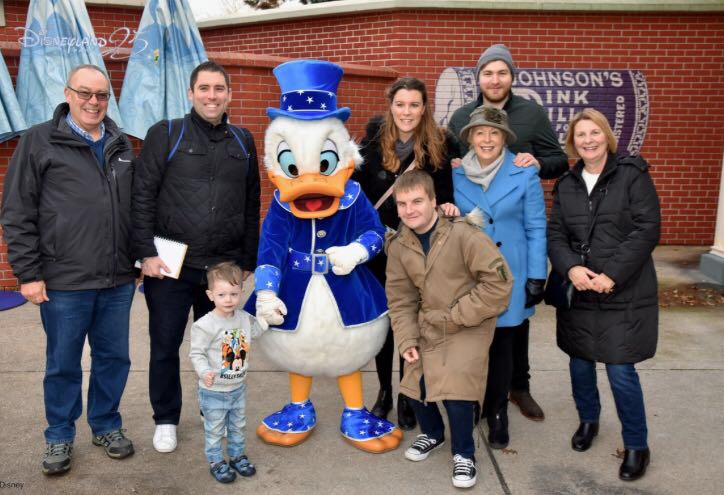 Please note, I have emailed Disneyland Paris with regards to our experiences on this occasion (and to see if Little Dog has been found in the laundry!) and I am awaiting their response.

6 thoughts on “A Rollercoaster First Visit to Disneyland Paris”