It’s become something of a tradition that The Lightys see in the New Year with Mummy and Daddy Hatchy and Auntie and Uncle Tempy. Indeed, New Year 2016 / 2017 was the 9th year that we’ve spent Twixmas together. Most years our adventures have taken all of us abroad – the South of France, Disneyland Paris and Bruges – but last year, due to circumstance, the first New Year with Baby Lighty, we spent it in Surrey at home with the Tempys. This was of course lovely, but I must admit that I was excited to take Baby Lighty abroad this year to Holland. Not only would we be seeing in the New Year through the eyes of a toddler, but it would also only be Baby Lighty’s second trip abroad.

Our first trip abroad last summer, to Monschau, Germany, really opened up my mind to looking at the world through his eyes, and I couldn’t wait to see what he thought of our trip to the Landal GreenParks’ resort of Hof Van Saksen in Nooitgedacht, North Holland. The resort is super family friendly (think CenterParcs-stylee), but just as much as I was looking forward to taking him to the soft play and trampolining centre, I also couldn’t wait to see how he reacted to spending a week with his grandparents, uncle, great aunt and uncle and second cousin. 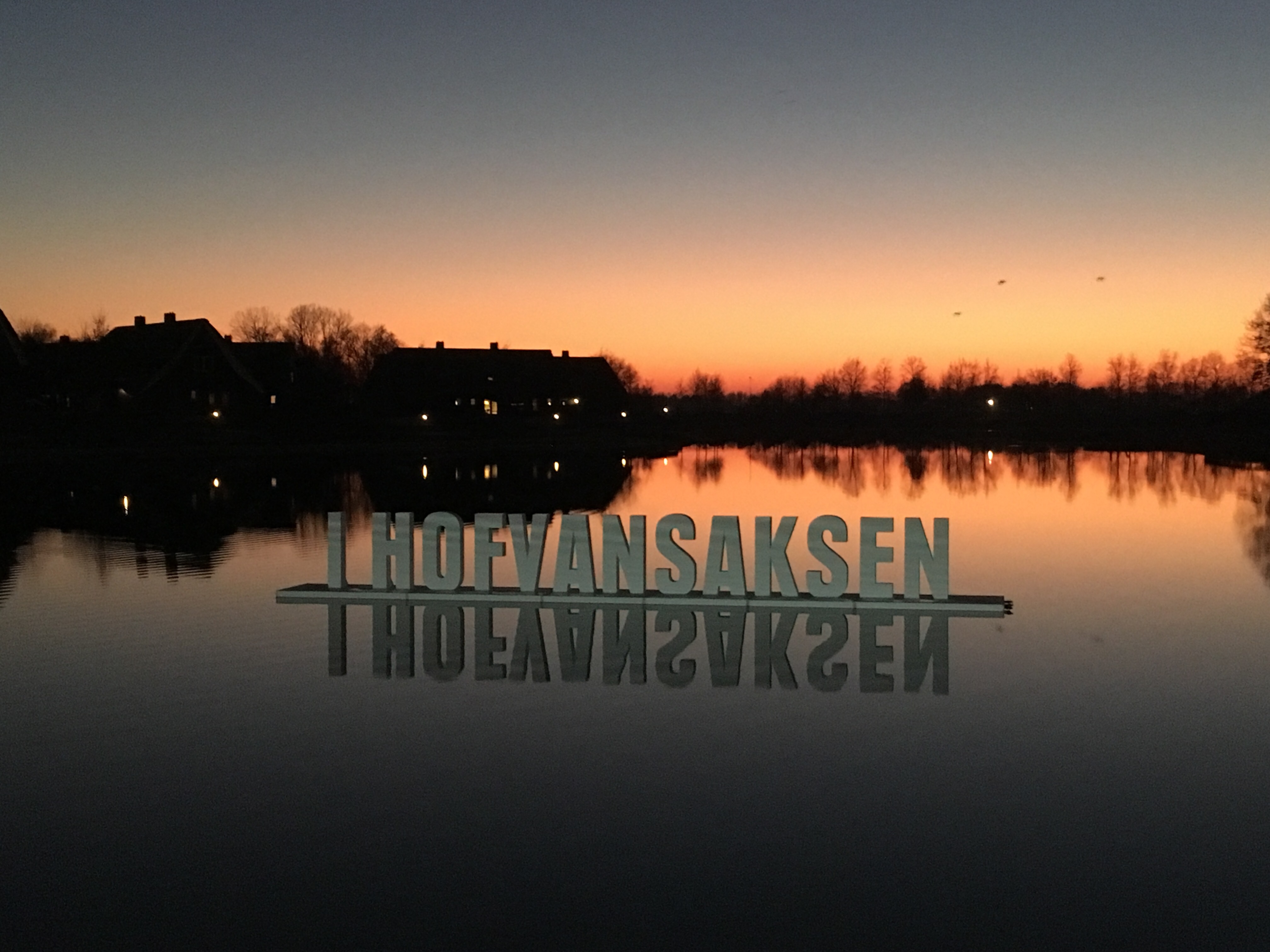 His reaction to the resort was exactly what I expected: he LOVED the soft play, and not content with the preschool area, demanded that both Daddy and Mummy take him on the big slide in the older children’s area (this didn’t at all result in Mrs Lighty screaming on the way down and then crashing through Mr Lighty’s legs, as he stood at the bottom taking photographs and laughing!), his first visit to a trampolining centre was a success, as was his first time on a bouncing pillow (which I’m quite surprised at as he doesn’t like bouncy castles!), and he couldn’t stop laughing and shouting “weeeee!” whilst swimming. 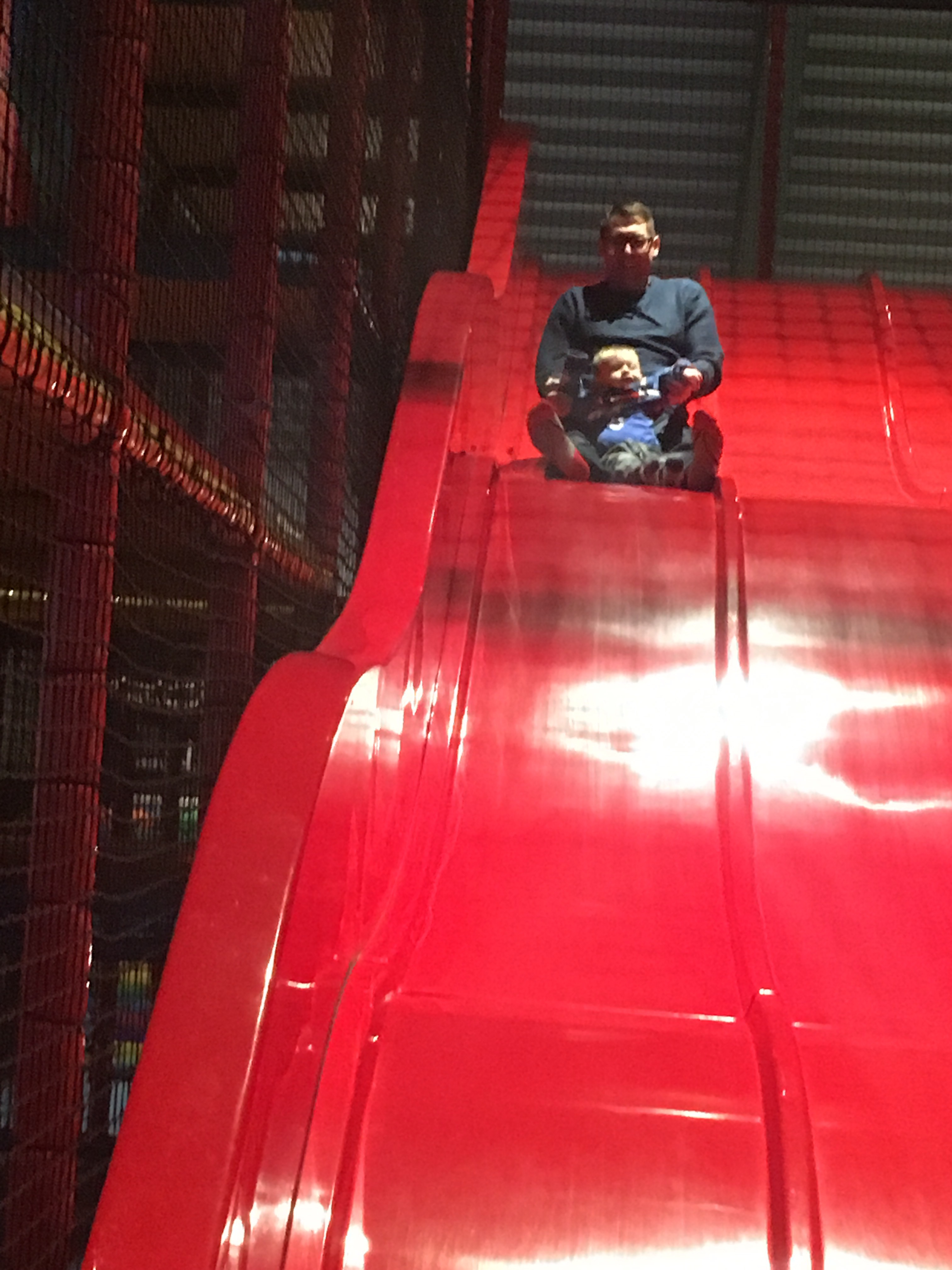 On the big slide with Mr Lighty! 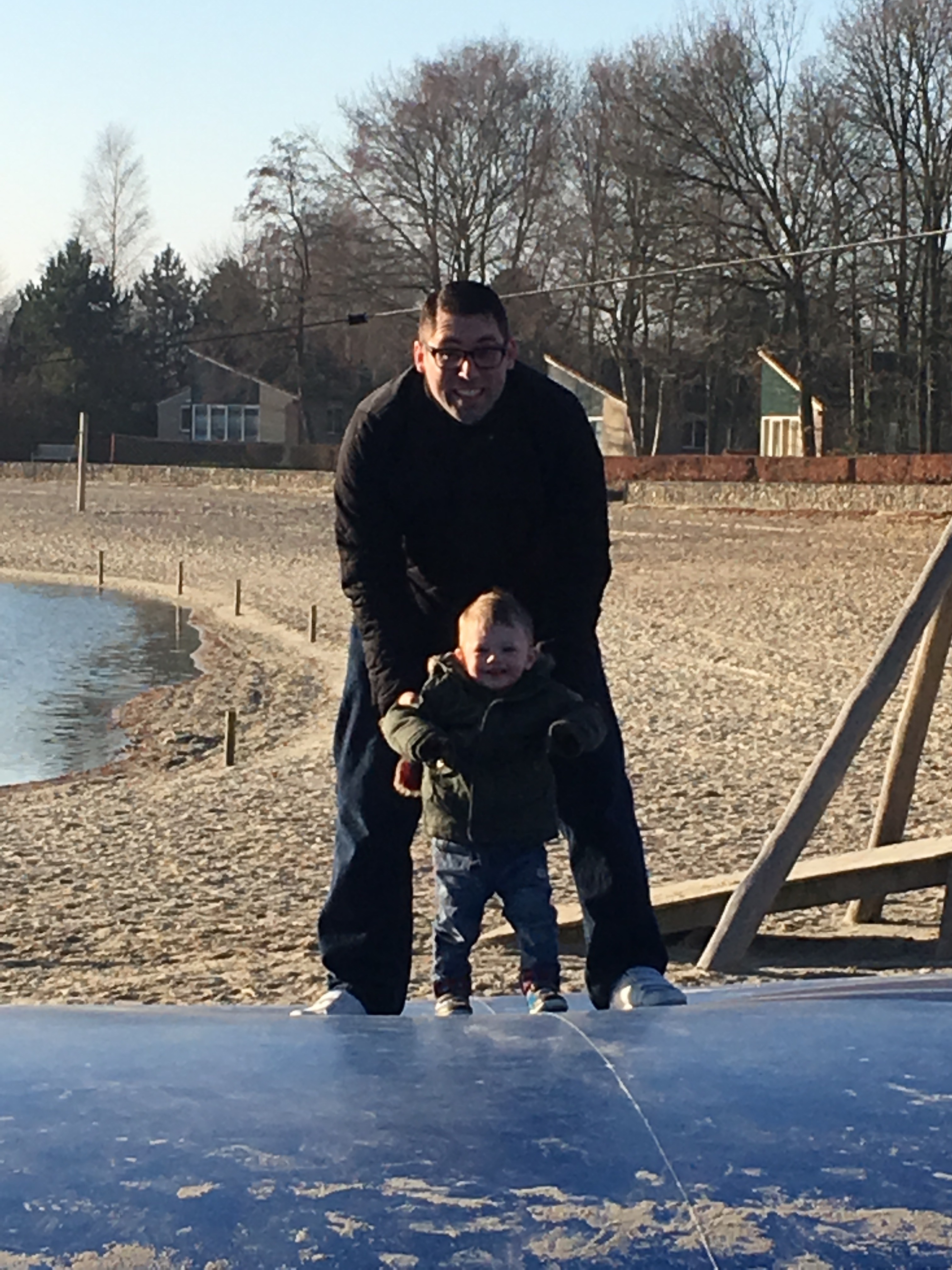 We even managed a trip to a seal sanctuary on the Waddensee whilst in Holland. It was the first time that Baby Lighty had seen seals, and as we stood in the foggy arctic-like conditions looking at these lovely creatures, he was insistent that they were ducks; every time one moved or headed towards the water, he would pipe up with “quack, quack!”. Whether it was the association with the fact that they swim, or because the statues outside front of the rescue centre kind of resembled rubber ducks, with their tails up in the air, I do not know! 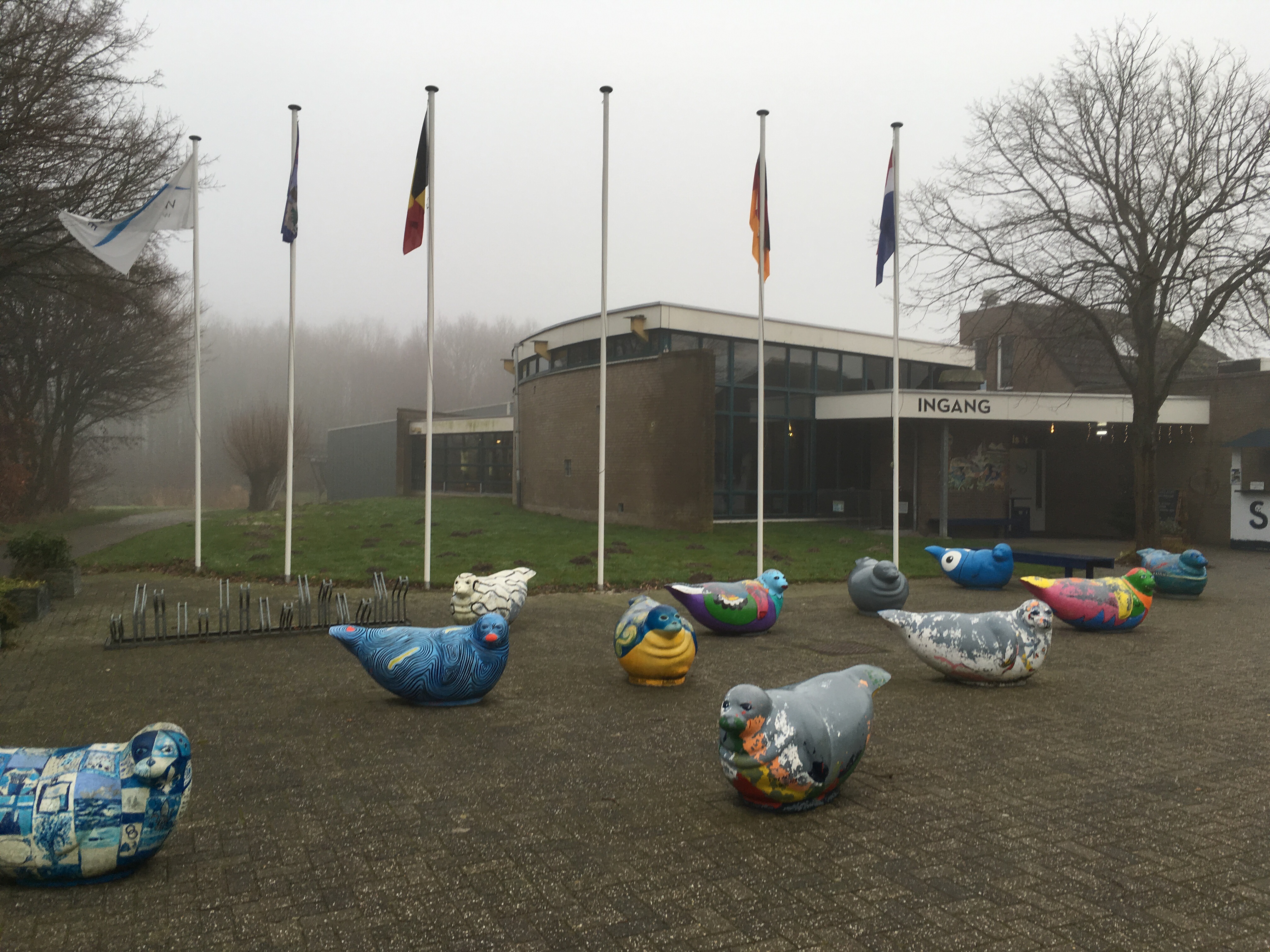 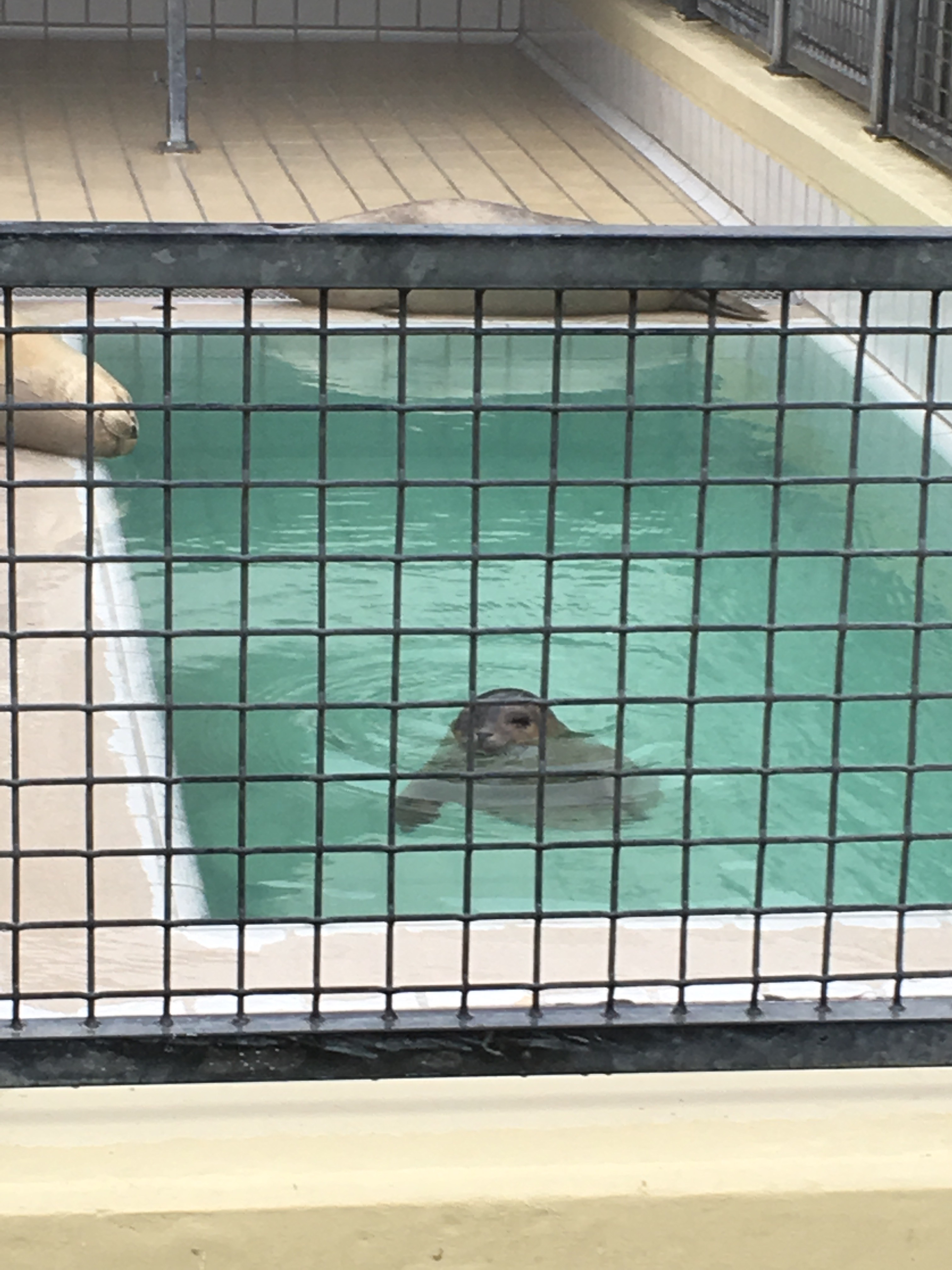 One of the centre’s inhabitants, who will be nursed back to health before being released back into the North Sea.

Either way, I think one of the highlights for him during the visit was his playtime in the sandpit within the visitor’s centre. A little Dutch boy befriended him and tried to talk to him a few times, but was unfortunately only met with a blank stare from Baby Lighty who is obviously still a little confused by those who speak a different language to English! And the poor little chap didn’t have a clue what to make of ‘Head, Shoulders, Knees and Toes’ in Dutch during the mini disco at the resort’s soft play, especially as the ‘eyes, ears, mouth and nose’ were in the wrong order!! 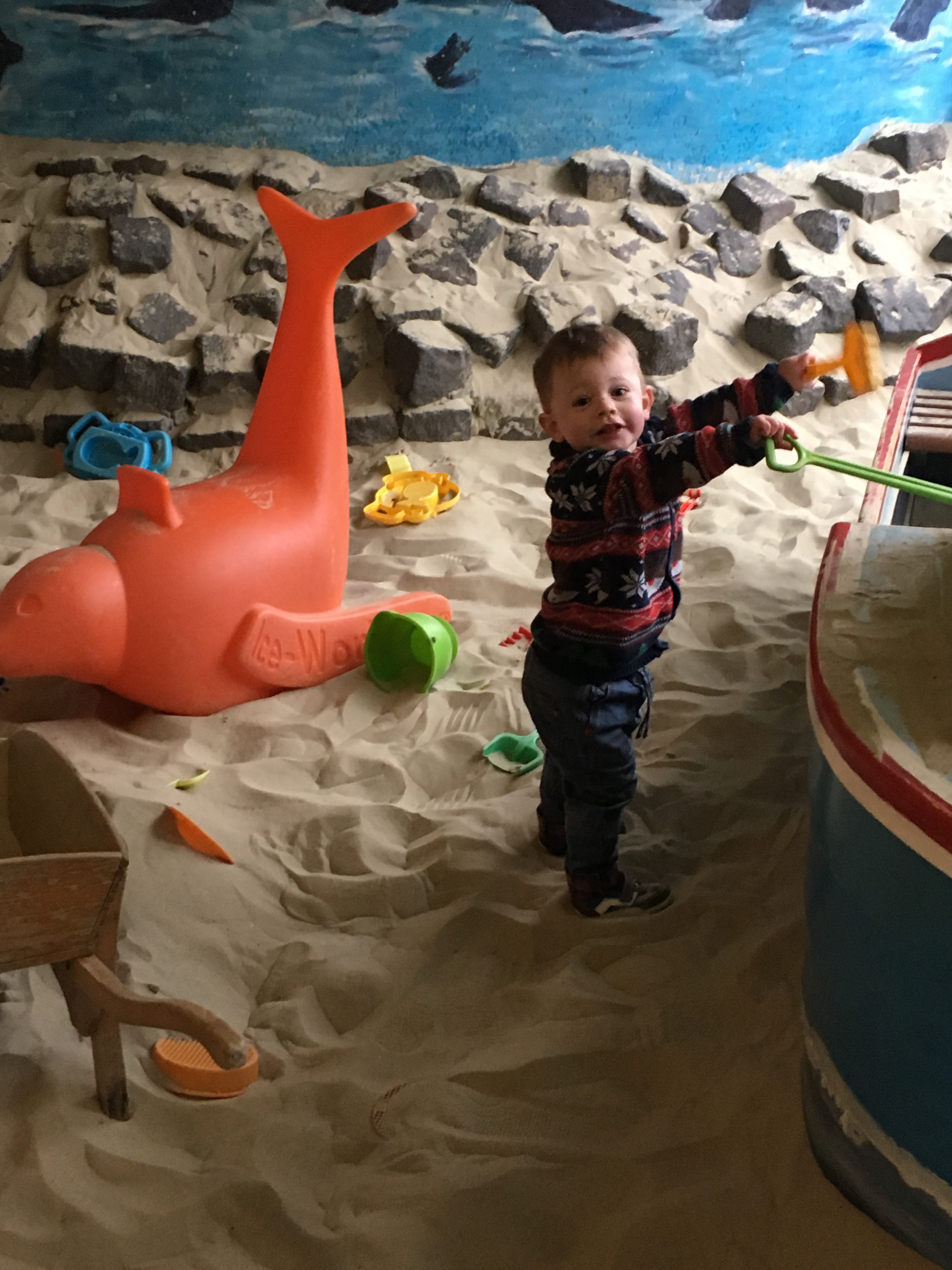 Playing in the sandpit at the seal rehabilitation centre.

I think he also loved his time with his extended family. He picked up second cousin Tempy’s name straight away, demanding that he play guitar with him (although NO ONE is allowed to actually touch the guitar!), and enjoyed learning to count with Great Aunty Tempy. Of course, this counting tends to go “one, two, two, two, nine, two…”, but as he’s only 18 months, we’ll let him off! We even had to have a little tea party on the perfectly Baby Lighty sized card table at one point! All of this has resulted in his speech coming on in leaps and bounds over the past few weeks to the point where you can have mini conversations with him now. 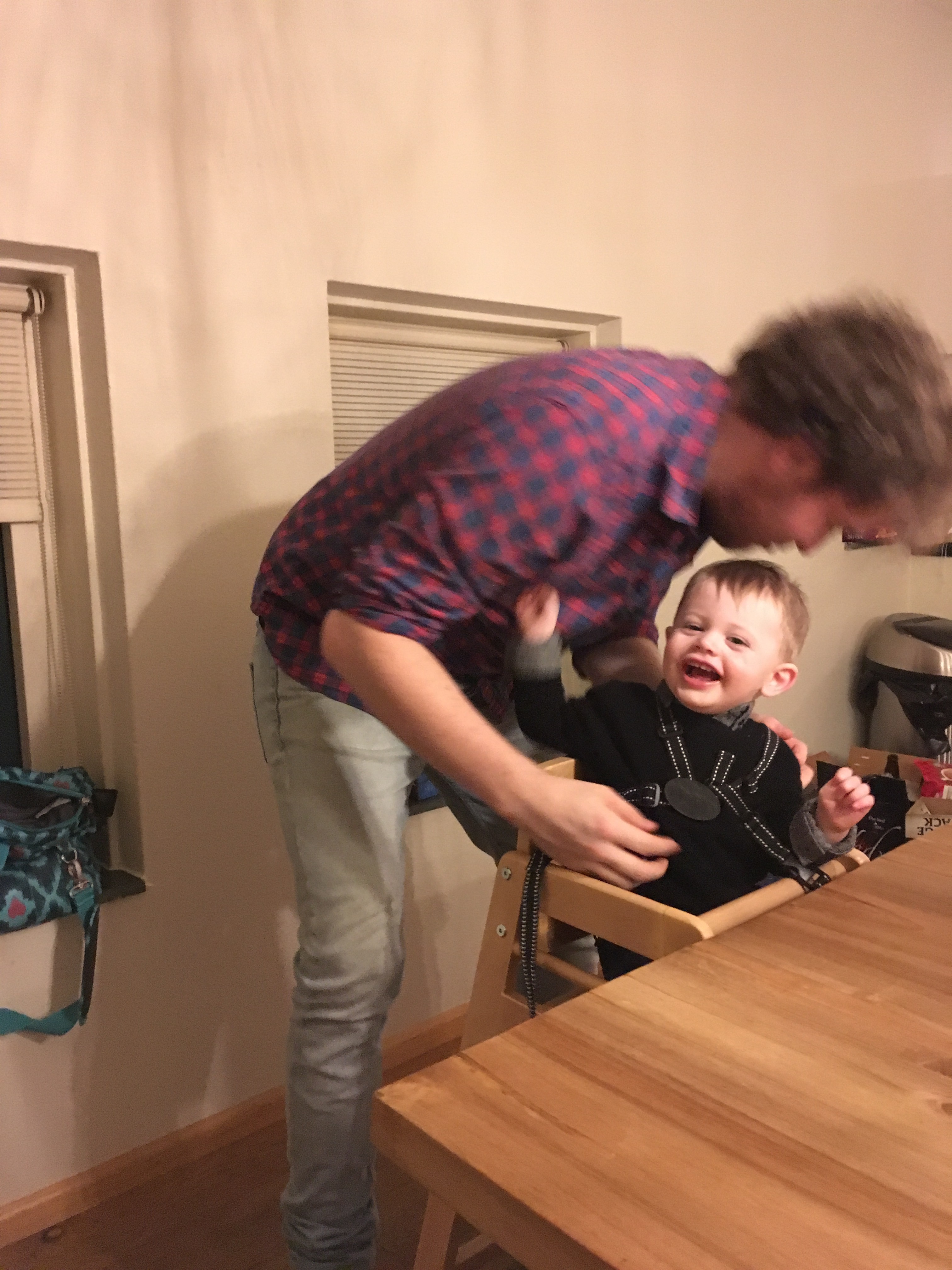 Food is always a big part of any holiday for the Lightys, and our trip to Holland saw Baby Lighty try plenty of new things for the first time. He did us proud in the restaurant whilst out to lunch (although I think the giant Lego wall and toddler board games that were available for the entertainment of the children probably helped!) and he loved his mini gourmet burger. He even tried beef borguignon and fennel for the first time; the beef borguignon was readily gobbled up on New Year’s Eve, but he wasn’t too sure on the fennel! 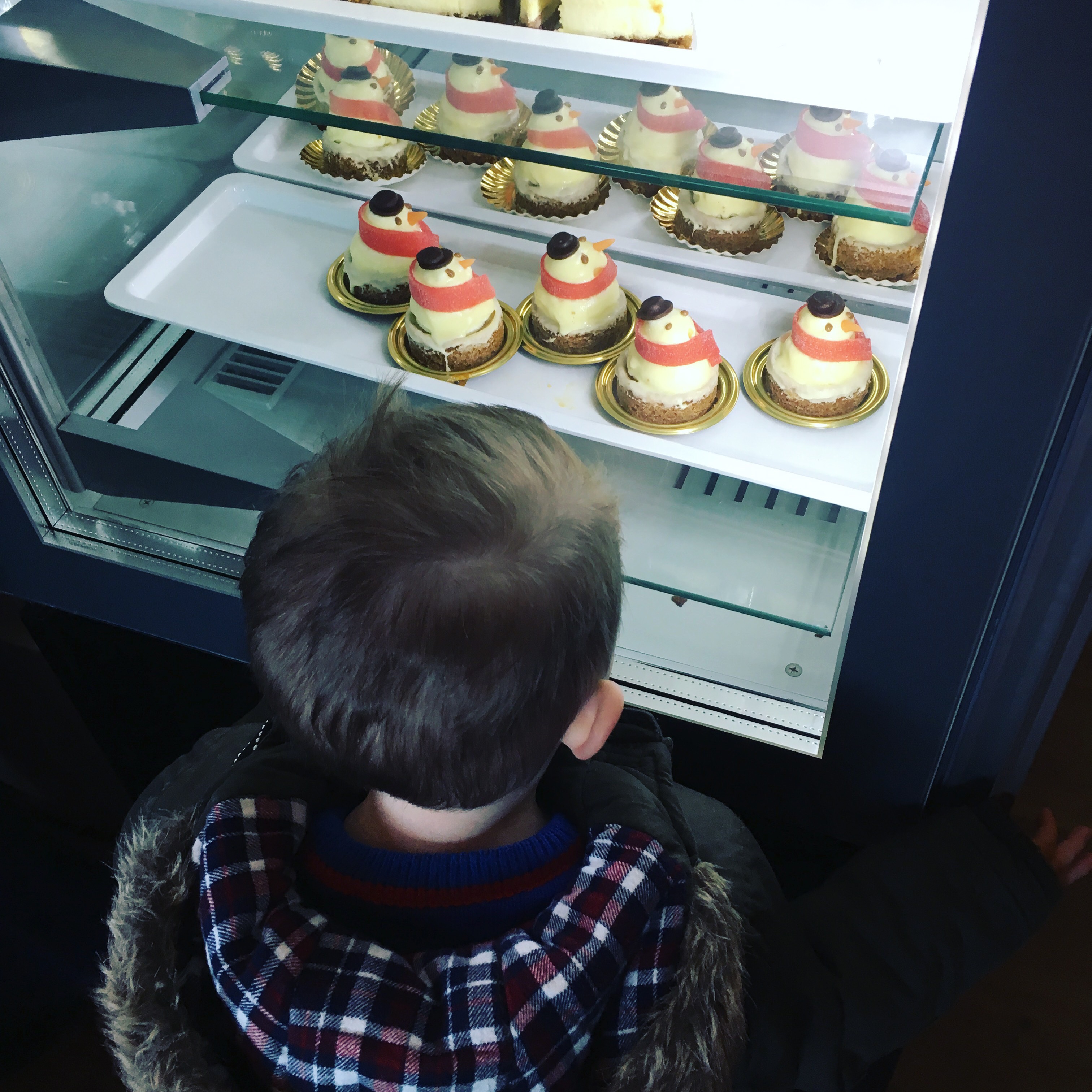 Eyeing up the cakes in the Grand Cafe! 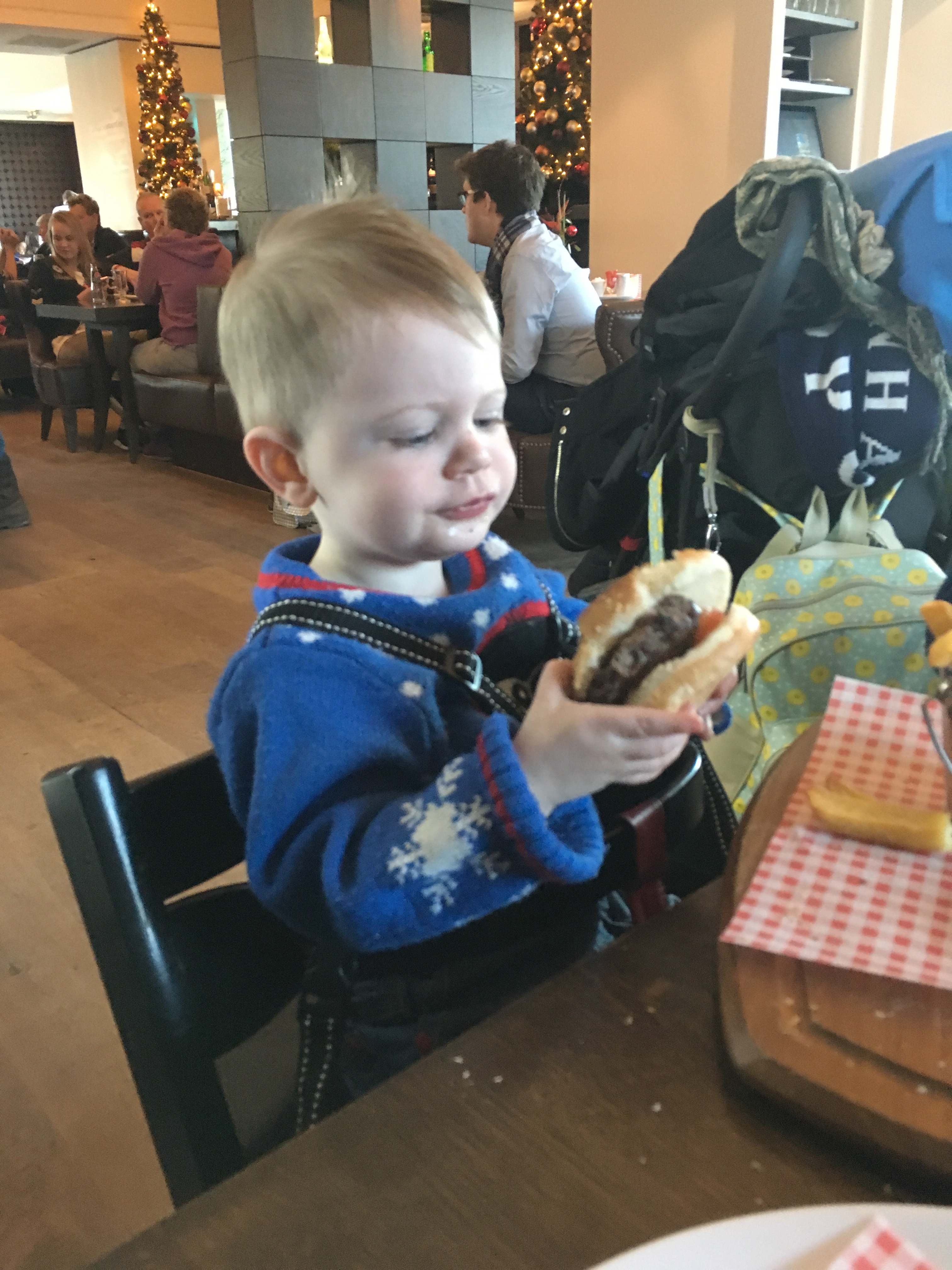 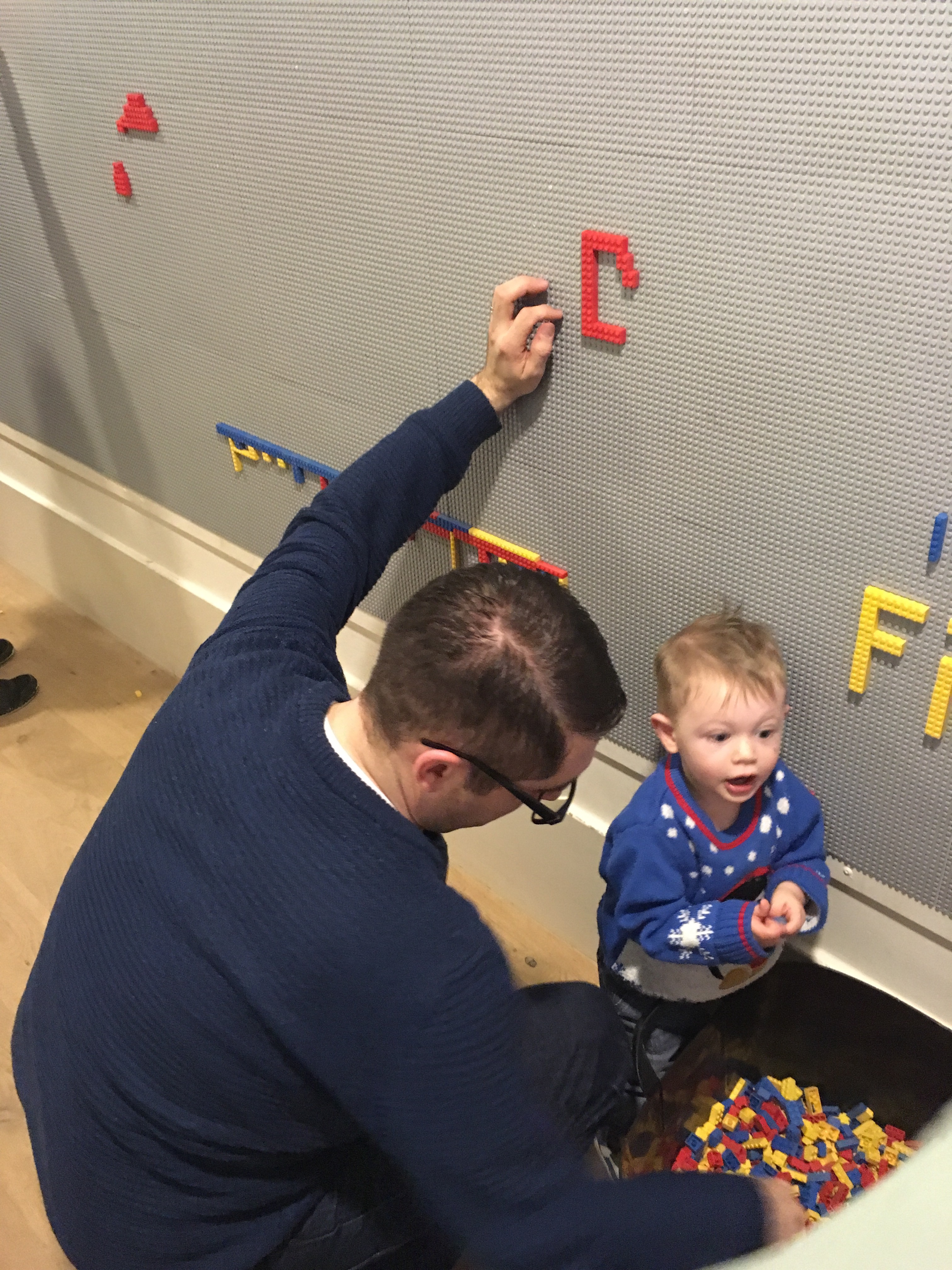 The wall of Lego!

Quite what he made of New Year’s Eve itself, I do not know. I think this is how it must seem, seeing in the New Year through the eyes of a toddler: there were Mummy and Daddy, all poshed up, Baby Lighty had a bath and then – shock horror – didn’t go straight to bed like normal but instead got dressed in his own finery and came downstairs for dinner, there was lots of singing and Bollywood style dancing at the table (don’t ask, it’s a long story!), as well as playing his mini guitar, and Mummy and Daddy let him stay up until 11pm! 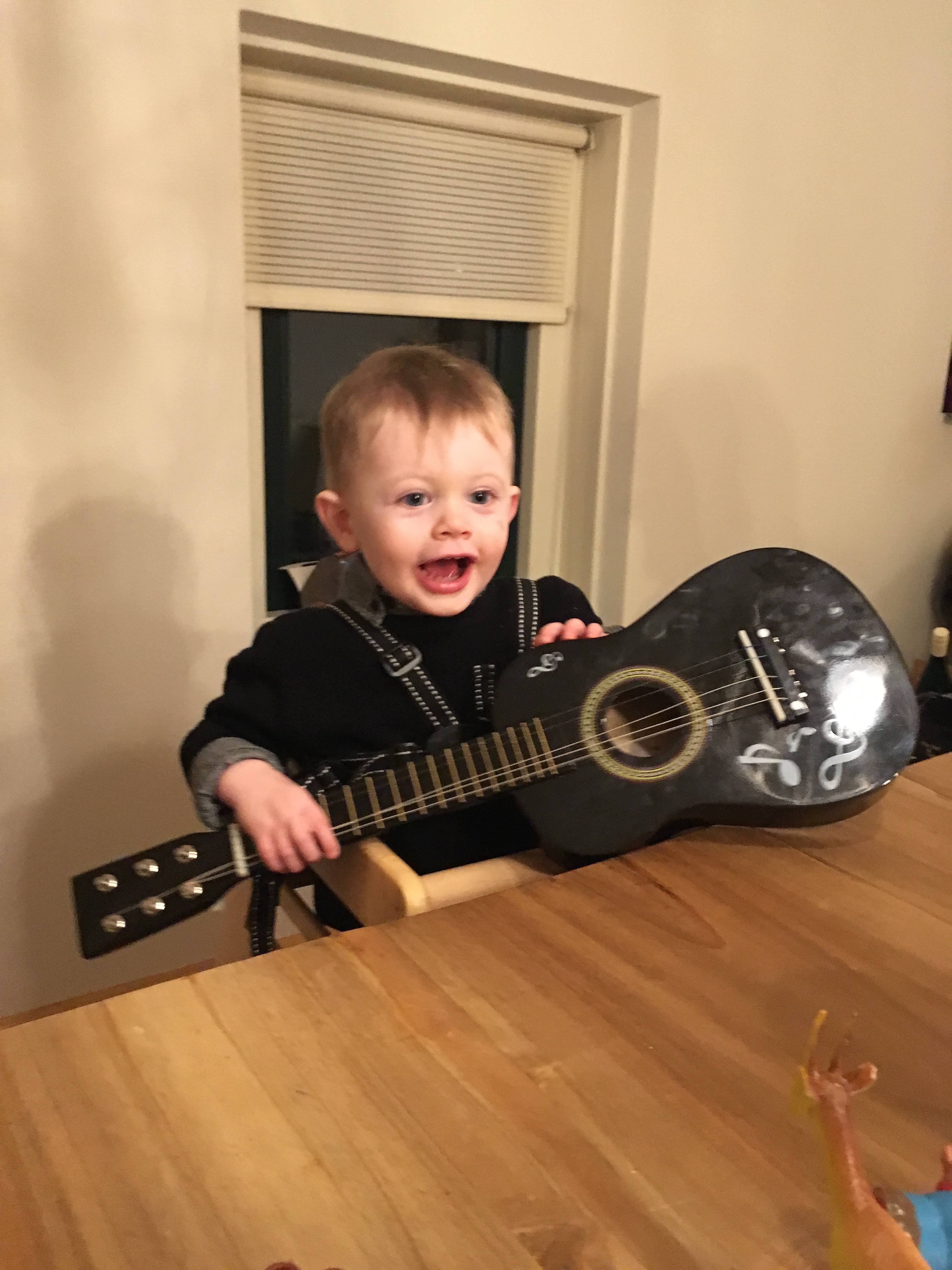 Entertaining us with his guitar playing on New Year’s Eve!

What’s more, the Dutch really, really like a firework, so when Mr Lighty took Baby Lighty up to bed for the night, there were whizzes and pops going off all around; not exactly conducive to sleep! The resort had given a timeslot for fireworks to be released from midnight to 2am, but in actual fact firecrackers were being let off all evening. The whole resort then became lit up by individual lodges setting off their own rockets during the two hour slot! 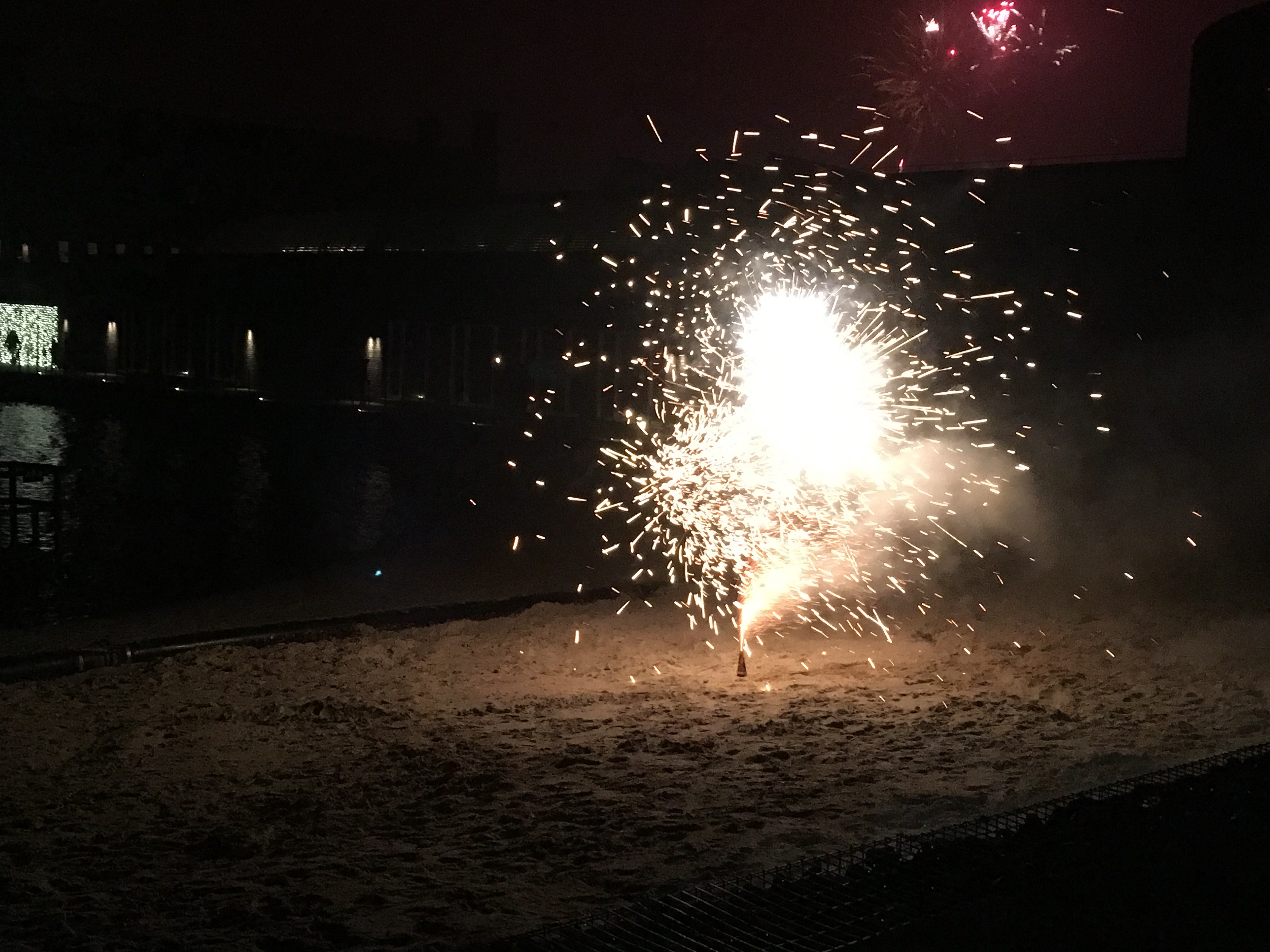 Fireworks on the beach!

Looking back now, and seeing in the New Year through the eyes of a toddler, it was a week packed with new experiences for Baby Lighty. I hope and I think they were mostly good experiences for him. And I think, one of the measures of its success, is the fact that now that we’re back at home, the person that he keeps calling for is Second Cousin Tempy: “Jaaaaaaake! Jaaaaaaaaaaake!”

And PS, Second Cousin Tempy, if you’re up for babysitting duties any time soon, just say the word!!

Please note, this is not a collaborative post, and we paid in full for our holiday. I simply wanted to capture Baby Lighty’s first New Year abroad!