Does anyone else have weekends that are jam packed? Event upon event upon event? Well last weekend was one of those weekends for the Lightys. In fact, last Saturday was a big first for Baby Lighty: it was his first trip to the beach!

Technically, he has had a couple of trips to the coast before – once when he was tiny and we were trying to make the most of Mr Lighty’s last day of paternity leave, and once when we enjoyed a few days in a cottage in Sussex – but he’d never actually been on the beach itself. Which meant that we were really excited when we were lucky enough to be invited to Walton-on-the-Naze for the day, to visit our friends who were holidaying in their caravan there.

The Great British Summertime didn’t let us down either, and Saturday gone was a glorious summer’s day. We loaded up the car with a picnic, bucket and spade, swimwear, towels and pretty much everything but the kitchen sink and set off on the hour and a bit journey. Our friends’ caravan is slightly further down coast from the pier, above a lovely, somewhat quieter part of the beach, surrounded by the more traditional beach huts that dot that part of the Essex coastline. Ideal, in other words, for littlies.

We set up camp by the sea wall, at the point furthest away from where the tide could come and get us, and I was so pleasantly surprised by how clean and beautiful the beach was. With weather like we had last weekend, it could have easily rivalled the Med!

Of course, Baby Lighty does always like to be a little bit different, and after my previous experience of him hating a messy play session, and not really wanting to go to town on the cake at his cake smash, I was interested to see how he’d react to the sand. He’s only ever been in a friend’s sandpit previously, and he wasn’t overly impressed with that, so I had a sneaking suspicion that he wouldn’t like the feel of the sand at the beach…and I was right! He wasn’t keen on putting his hands or feet on the sand (which in some ways was quite handy, as it meant that he stayed put on the beach mats and picnic blanket rather than wander off!!), and when we took him down to the water’s edge, there were a lot of “wows” coming from him, but once his little feet were in the water it was a different story and he wasn’t impressed by the sea either: Baby Lighty decided that he would take to doing some sort of yoga pose to ensure that only one foot was ever in the water at any given time!! 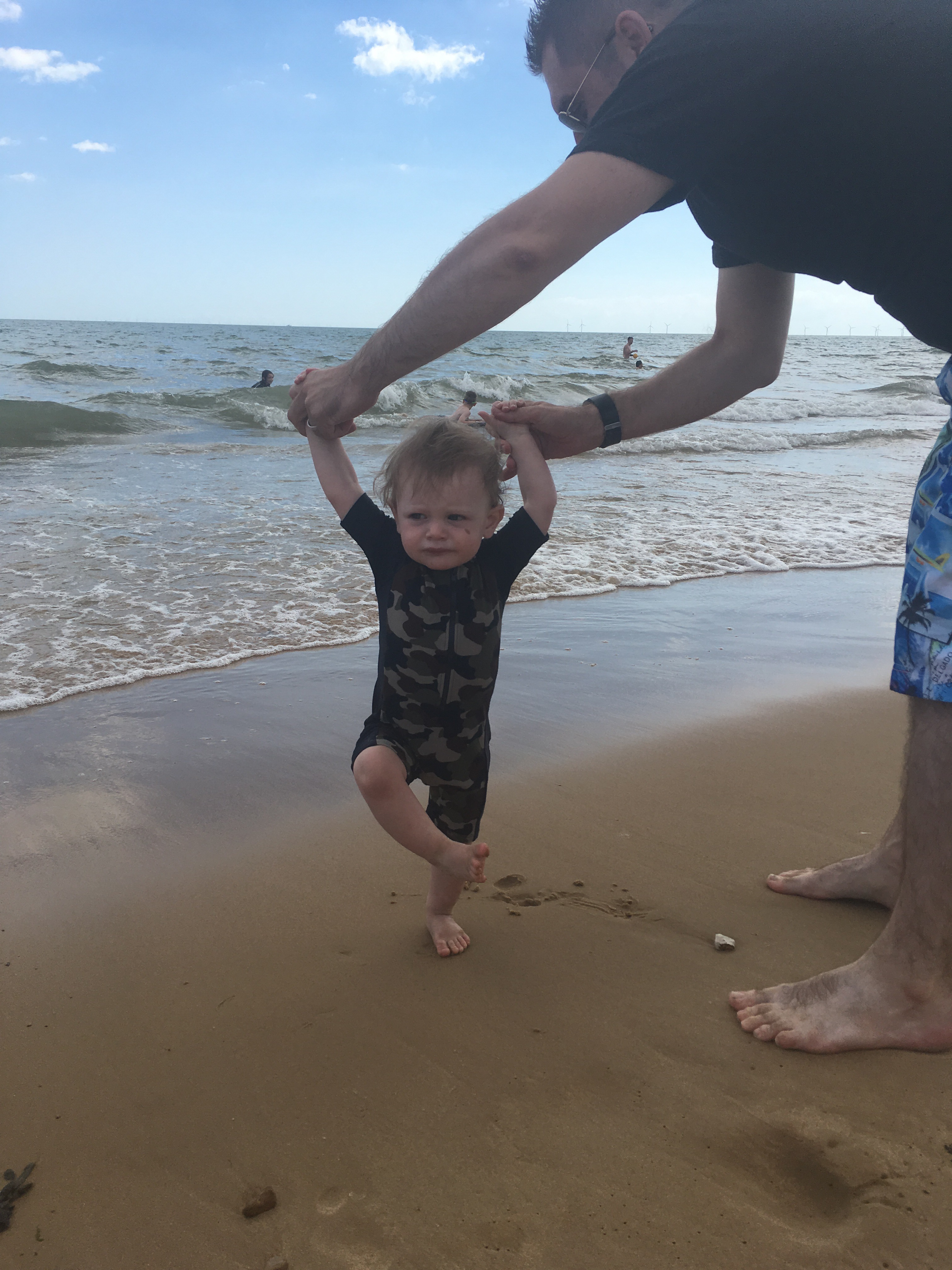 “I must keep one foot out of the water at any given point!”

He did, however, really enjoy stirring buckets filled with sea water with his plastic spade, and digging in the sand. I was really impressed that he was able to dig some sand up with his spade, and put it in a bucket, or alternatively pour it all over Mrs Lighty’s legs with a little “Oh!” (like it was a complete accident!) and then brush it off again to clean me up! 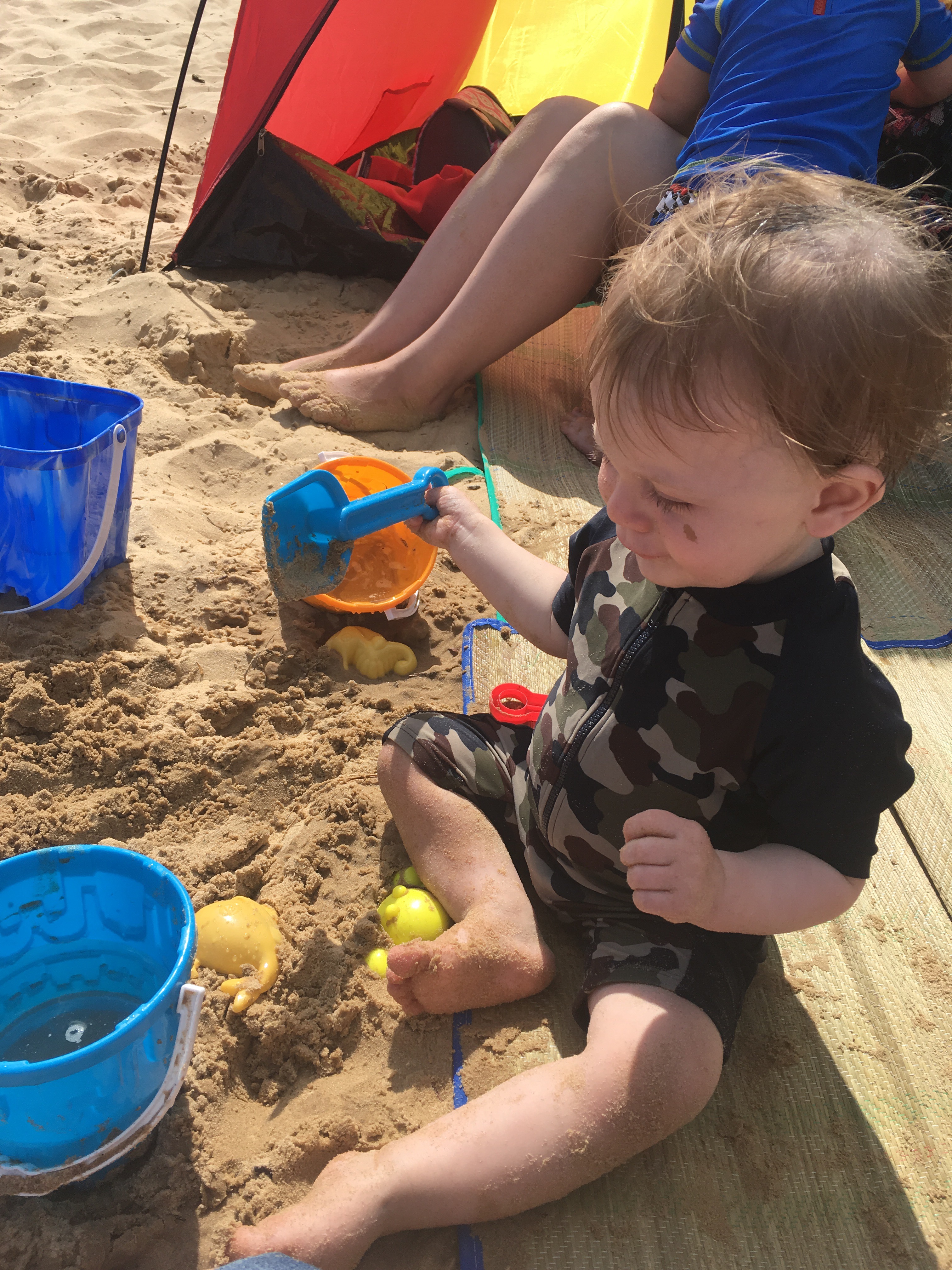 After a quick shower-down back at our friends’ caravan (something else that Baby Lighty’s not keen on…the shower that is, not the caravan!) we wandered down to the pier and walked the length of it with two sleepy babies. Baby Lighty didn’t want to give into his nap though as there was too much going on around us, especially when there was the promise of ice cream before we headed home! 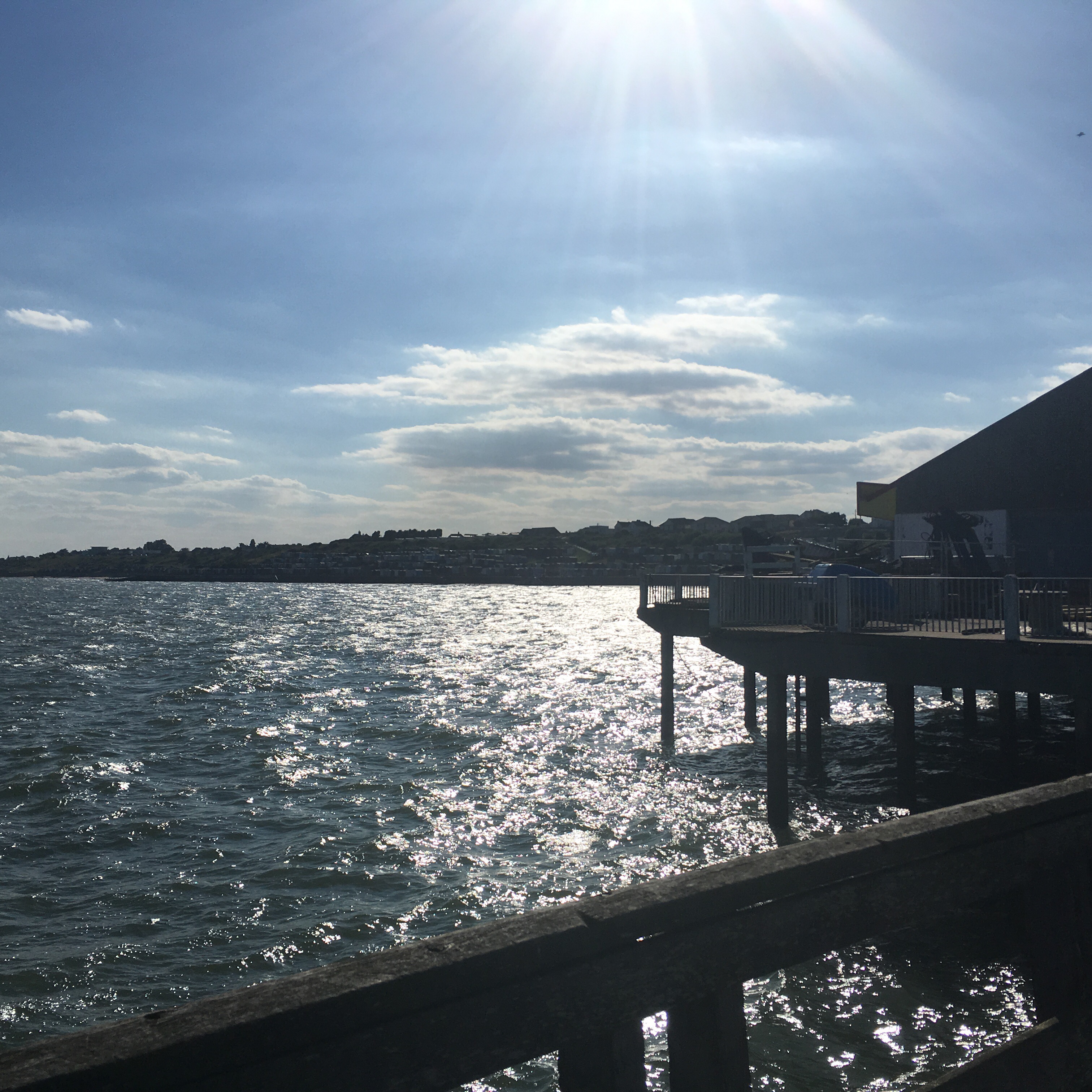 The view from the pier.

We had a brilliant day, and I know that Baby Lighty did too, as the next morning he didn’t wake up until 11am – pretty much unheard of for any baby, surely?! Mrs Lighty, of course, got up at 8am to check on him, and then didn’t know what to do with herself as Mr Lighty had taken the opportunity to lie in too.

Once everyone in the Lighty household had woken up, we had another big event on the Sunday: Nanny Kersey’s 80th birthday lunch! Technically, it was her birthday the week before, but it wasn’t until all of the family members were in the country that we went out to celebrate. And as an added bonus, Nanny Kersey picked our wedding venue’s restaurant for the lunch! This did, of course, mean that Mrs Lighty was determined to take a recreation of one of our wedding photos, but with Baby Lighty included, especially once I realised that I’d unwittingly picked a long white (if somewhat floral) dress for the occasion! 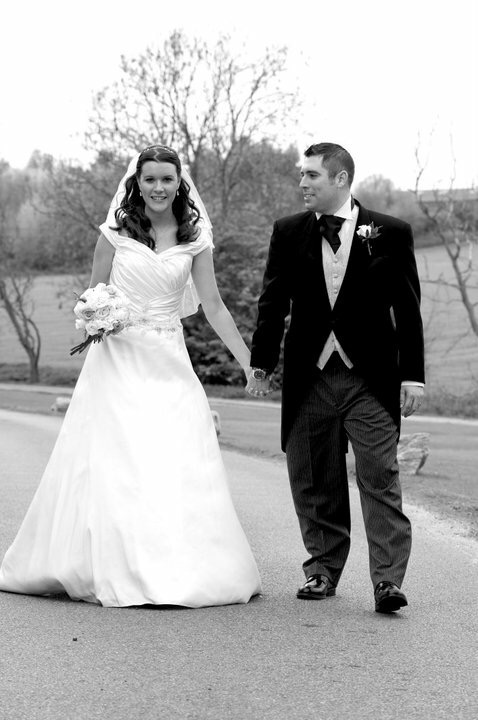 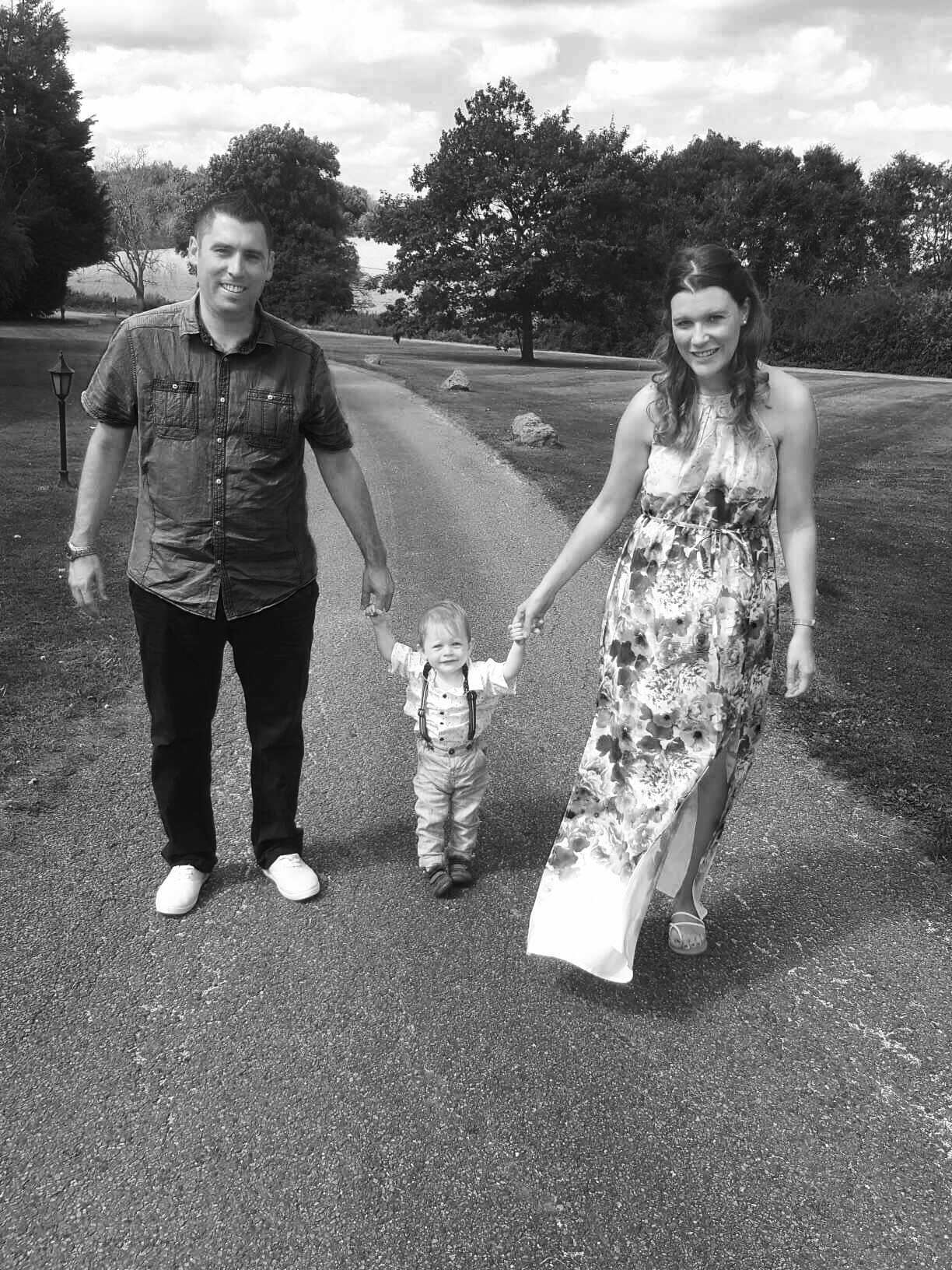 …and our attempt at the recreation! Yes it has bugged me since last Sunday that Mr Lighty and I should have been on opposite sides of the photo!!

We had a really scrummy lunch, although I’d expect nothing less from our wedding venue. I couldn’t believe how much of the definitely-bigger-than-child-sized-portion of roast turkey dinner Baby Lighty ate, washed down with a little bit of ice cream (bad mother alert! Ice cream twice in two days!! But this was a celebration!) and Cousin Kersey organised a wonderful cake for Nanny Kersey too. It was just lovely to have the whole family together in one place celebrating such a wonderful occasion, and was the perfect end to the perfect weekend. 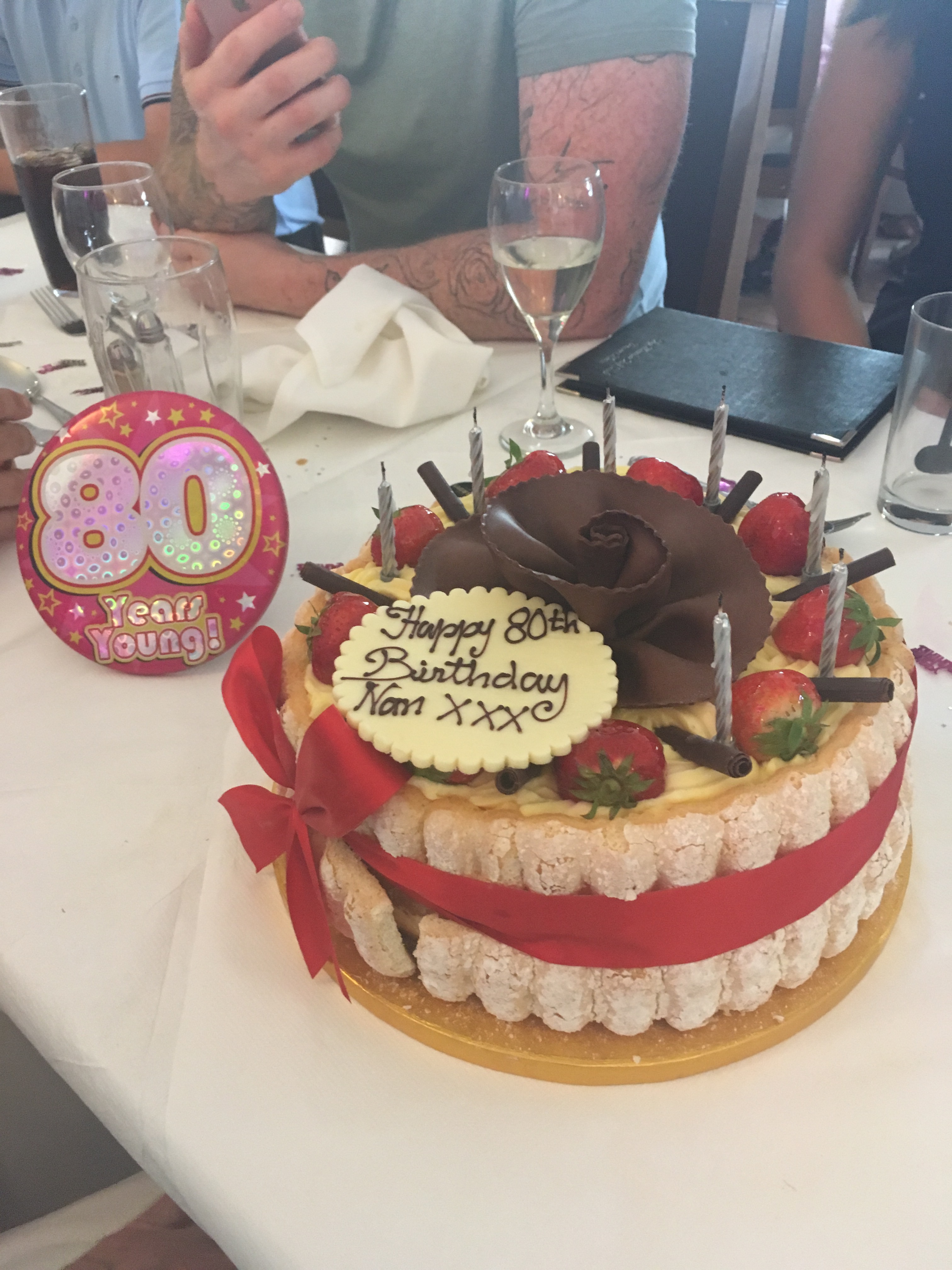 Now that’s what you call a birthday cake! 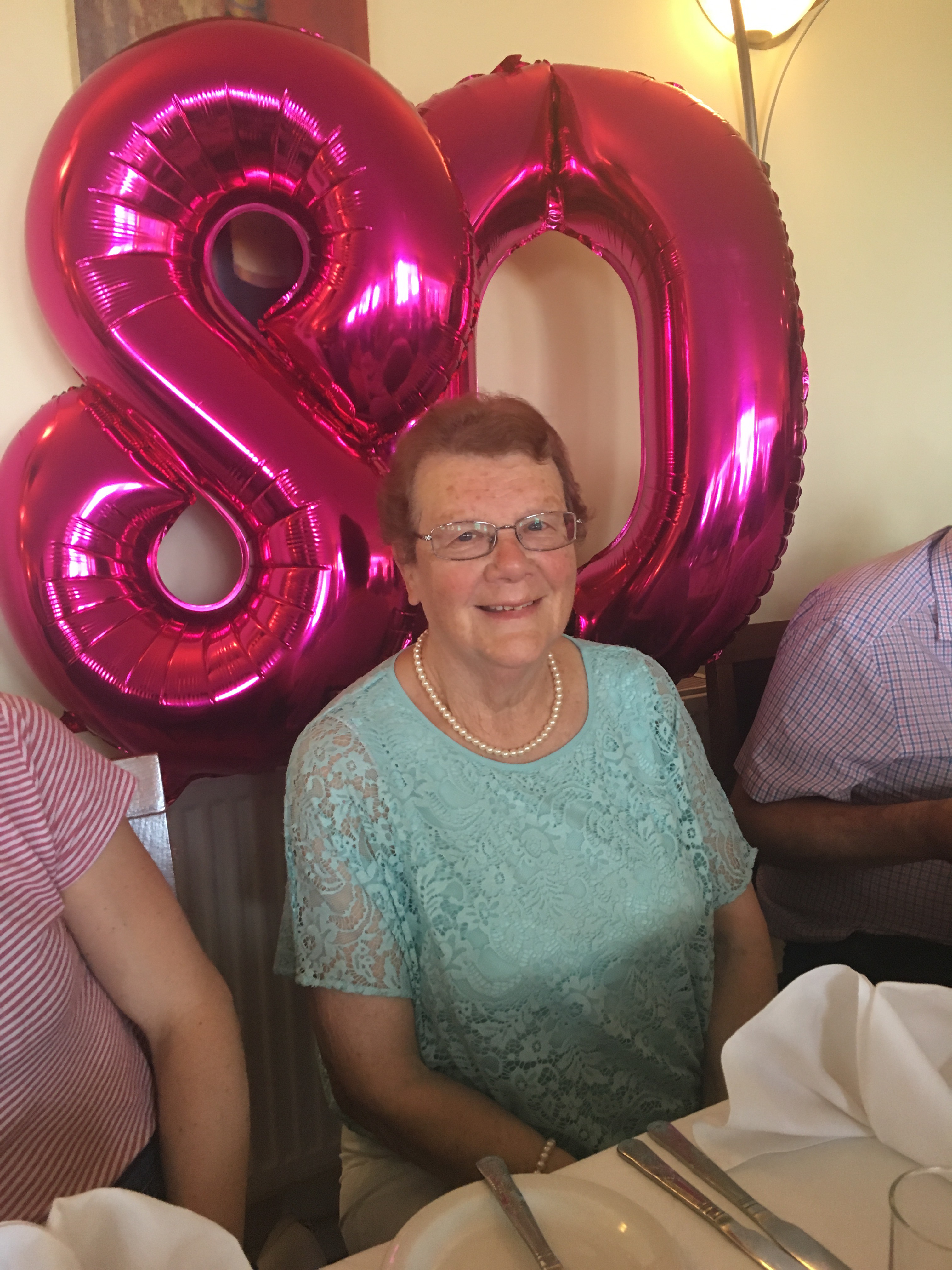 All of this, and we haven’t even mentioned Mrs Lighty’s grown-up night out on the Friday. Let’s just say that Mrs Lighty’s weekend started just as wonderfully – with Pimms and Prosecco and good friends involved – as it ended….

24 thoughts on “Beaches and Birthdays”