Last week I was the epitome of the stereotypical Mum-who-attempts-to-bake-with-their-toddler. It has to be said that when your two year old turns round to you as they’re mixing the cake mixture, peers into the bowl and says, “Mummy, there eyes in here!”, you know it’s not a good sign. And I have to admit, as I peeked over his shoulder, it did look rather like there were a few stray eyeballs floating around in the mix. But that was ok. Because this was Halloween baking. So it had to be a little bit gruesome, right?! And as I looked round my kitchen, at the flour covered worktops, the empty packets of chocolate chips and the discarded pumpkin remnants, the kitchen resembled something of a crime scene. This was, it appeared, The Great Pumpkin Massacre! 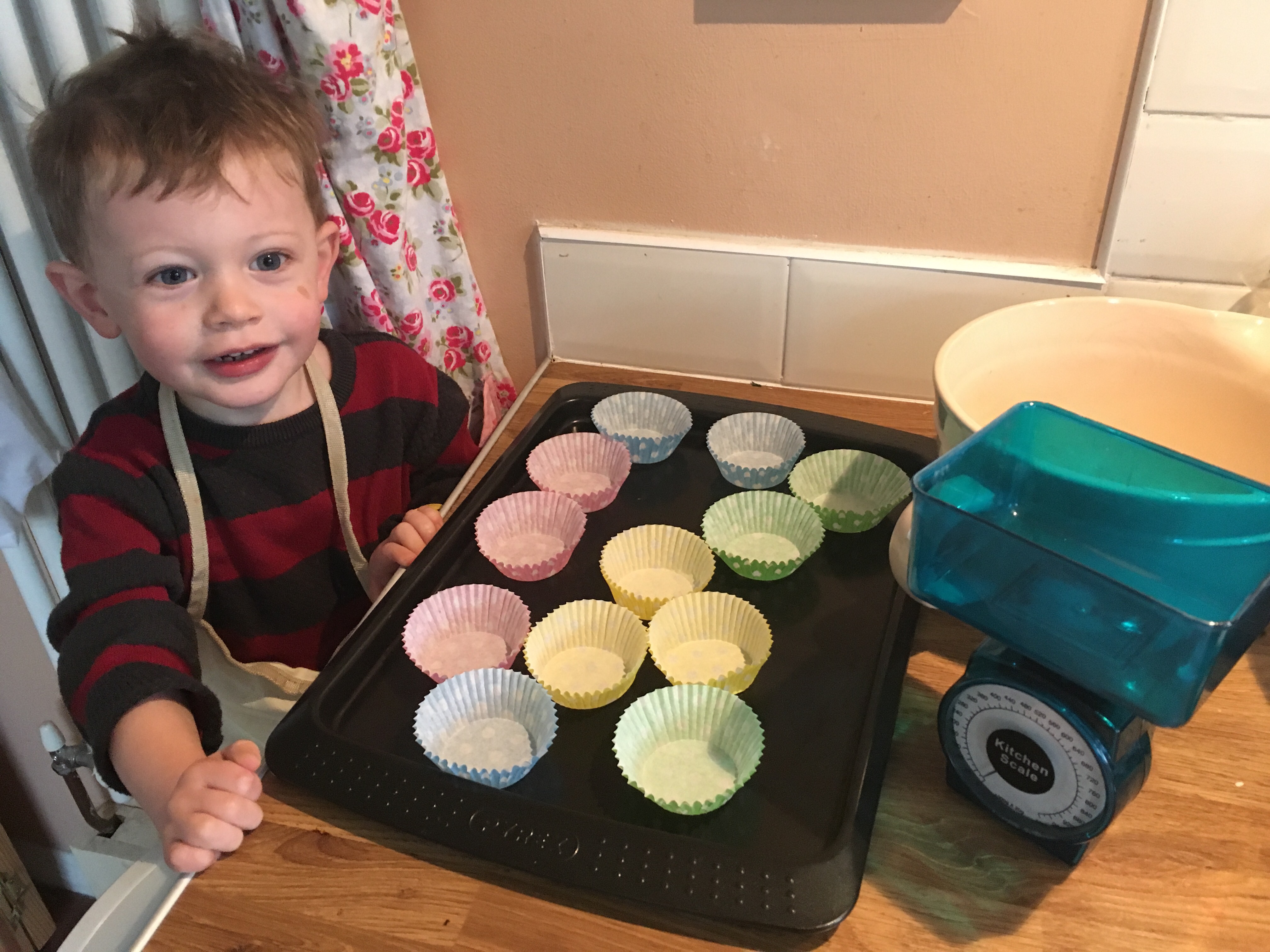 But how did this crime scene come about? How did a simple baking exercise turn into such a hoo-haa?! Well, I guess, pretty much the same way as most toddler baking sessions turn into such a palaver…but perhaps with a few more pumpkins thrown in for good measure!

And it all started so well, too. Crack four eggs. Even a non-baker like Mrs Lighty can manage that. And Baby Lighty stood proud as punch, mixing them so well! But then the next step…well, let’s just say that when my friend said that it was a toddler friendly recipe, I still had to ask her just how it was that she created the pumpkin purée. But then I’m not really one for Halloween, we’ve only celebrated once since Baby Lighty’s arrival, and I don’t really know much about pumpkin carving, so this was an ok question to ask, right? Even I could follow the rest of the recipe, surely? 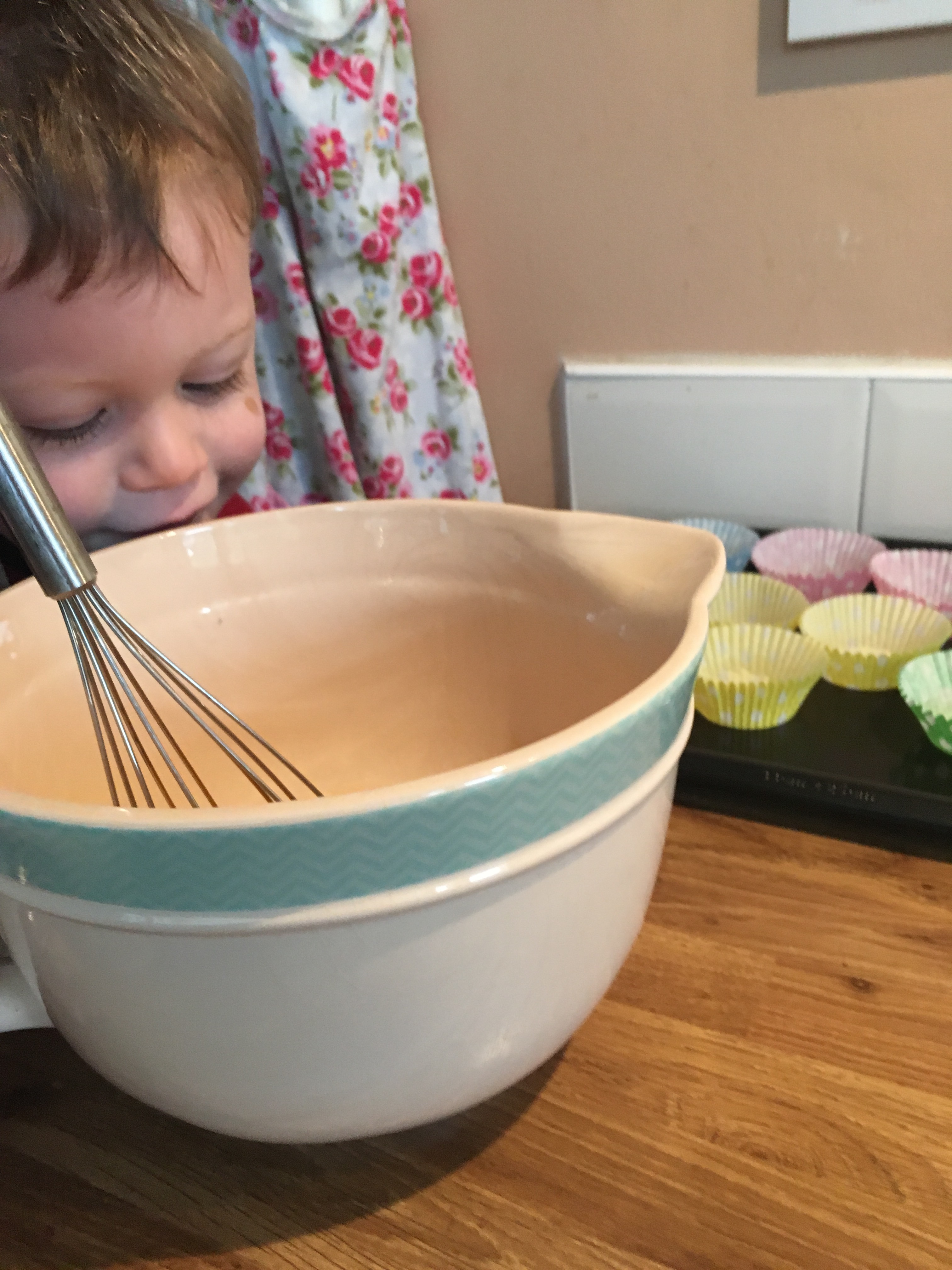 Don’t be fooled by the idyllic baking scene…

Follow a recipe, yes. Carve up a pumpkin to make pumpkin purée? No. Or at least that’s what it felt like half an hour into the exercise! Blimey pumpkins are tough little fruits, aren’t they?!

“I help you Mummy!” said my willing little sous chef. Erm, no, that’s ok darling. I think it’s best that we only risk my fingers and my sanity in this exercise, and not yours too.

Eventually, the pumpkin was hacked. Then it was pulped. And we added it to the eggs, flour and sugar. And that’s when Baby Lighty piped up with the sentence you never want to hear whilst baking:

“There eyes in here Mummy!”

Hmmm. Yes. Eeewww. You’re quite right Baby Lighty. It did look rather like there were eyeballs floating around in there. That’s not exactly what you want from a cake mixture now, is it? Even if this is The Great Pumpkin Massacre! 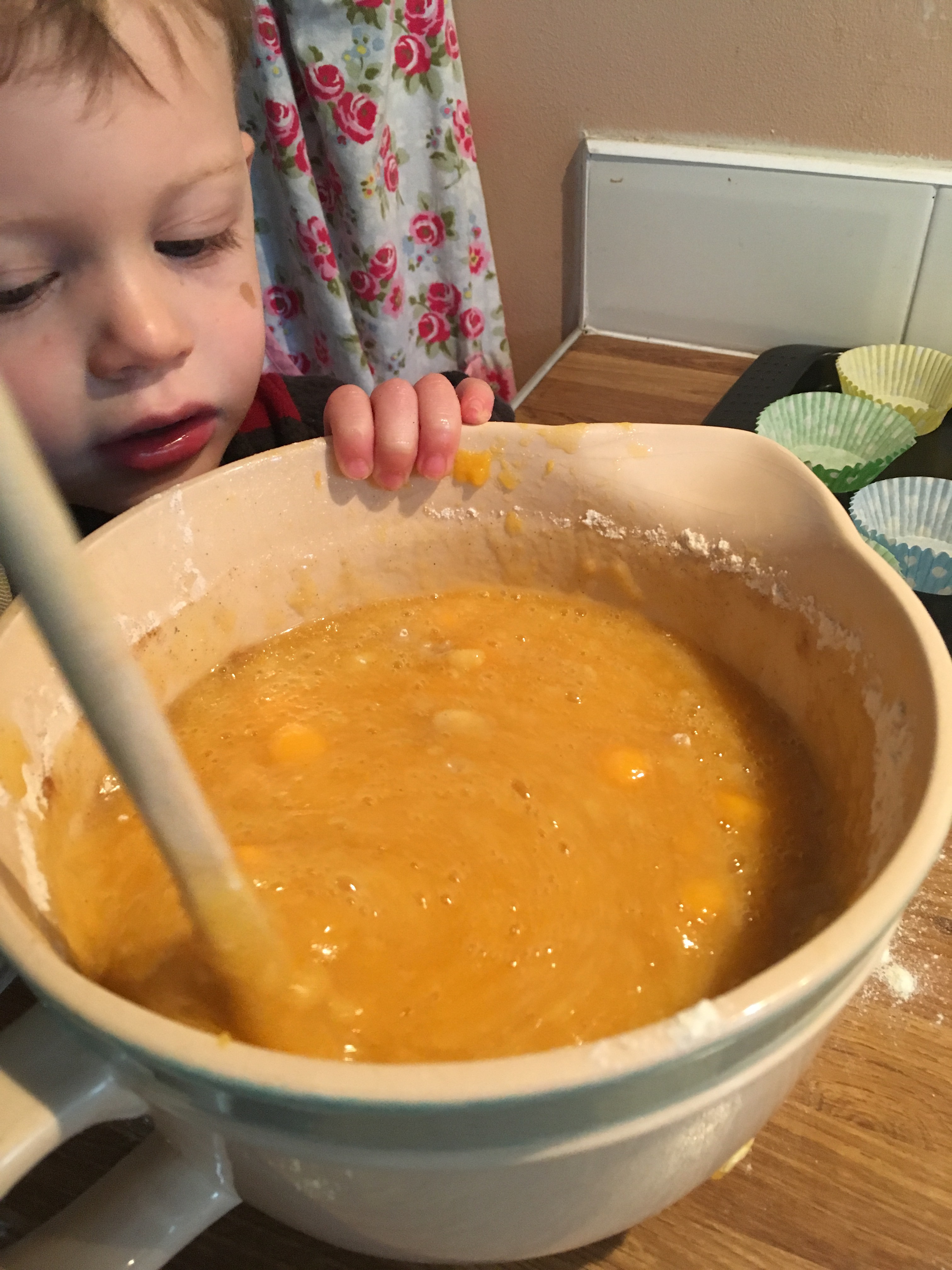 Right. Fish all the eyeballs out. Put them back in the blender. Pulse some more. Create actual proper pumpkin purée this time. Put the mixture back in and let Baby Lighty mix again.

Ok. So now we needed a separate bowl for the rest of the mixture. And this is where it became obvious that we are not bakers, as we didn’t have another bowl. Oh well. We’d have to make do with a glass baking dish. But of course, this does then mean that great puffs of flour will. go. everywhere!!! Goodness me, perhaps this was just the forensics dusting for fingerprints in the wake of The Great Pumpkin Massacre?!! 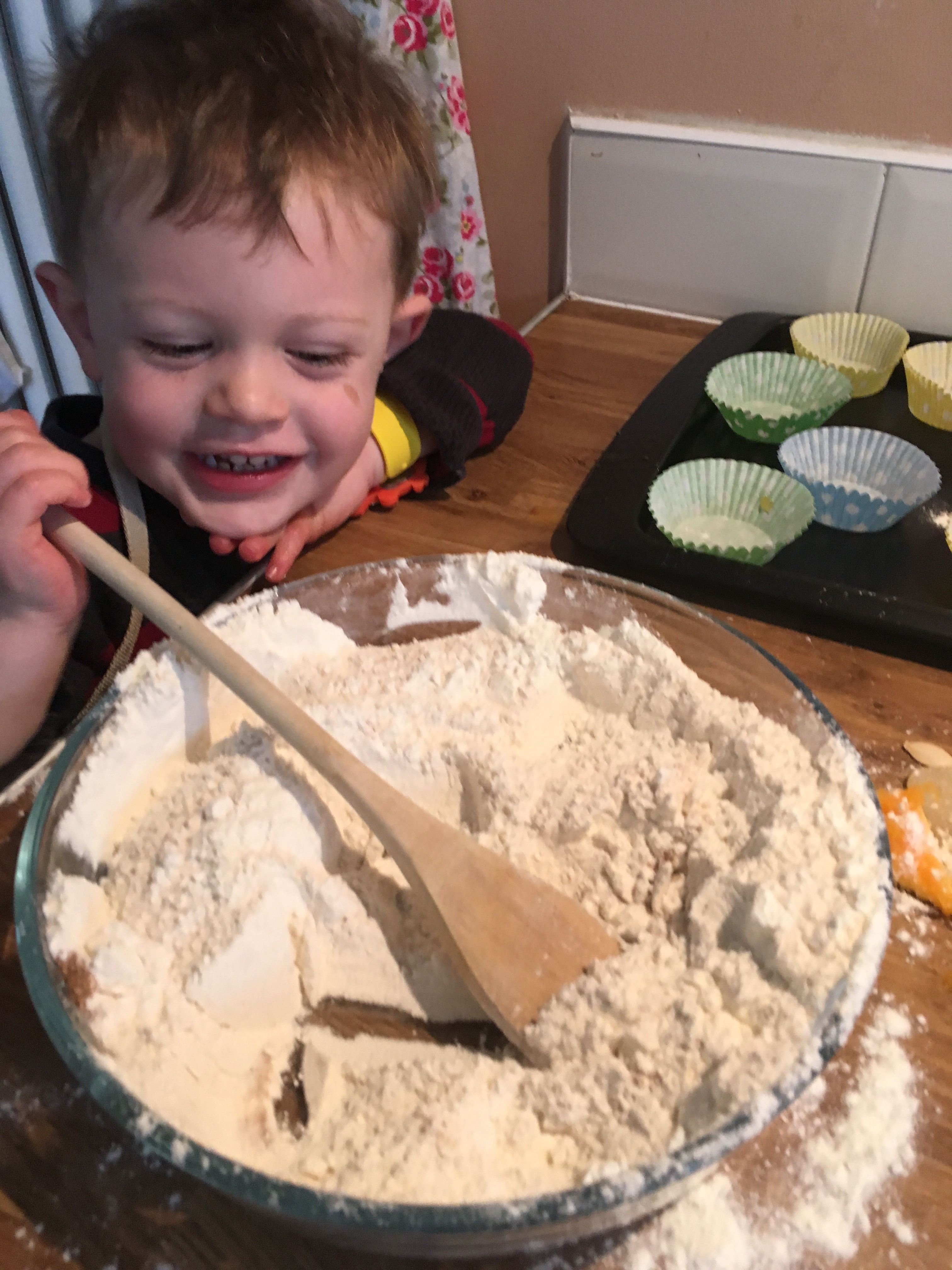 EVENTUALLY, after all of the mixing and hacking and wafting of flour and general messiness, we had a disgusting looking gloop. Baby Lighty declared, however, that “it smell tasty Mummy!” Now to spoon it into the cupcake cases. Even a toddler can do this, right?

Nope. A 34 year old can’t even manage this, as evidenced by the fact that I didn’t realise how heavy the mixture was, and hadn’t banked on the fact that the cupcake cases would give way, spilling the mixture everywhere. I kid you not, one cupcake case, complete with mixture, I just scooped up and put in the bin! At least after the binning incident we realised that one spoonful of mixture was enough. And that the quantities of ingredients in the recipe would actually make enough cakes to fill a small bakery. Which is why I tipped the remainder of the mixture into one big cake tin and made one giant cake with what was left!! 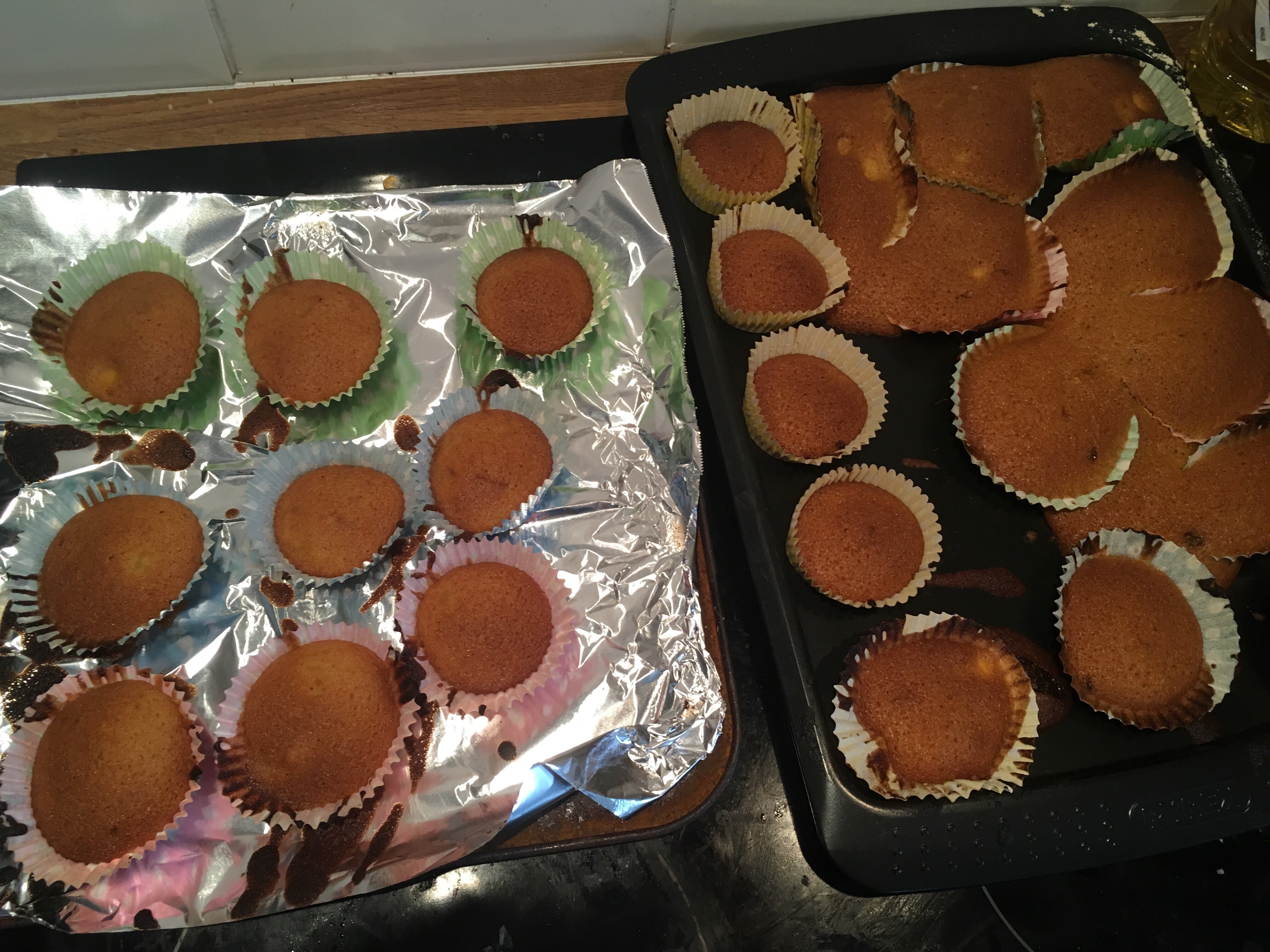 What a palaver. By this point, my kitchen looked like it often does after house parties we’ve hosted, with half opened packets on every surface, cake remnants everywhere, things dropped on the floor and inhabitants who were looking slightly worse for wear. It took just about as long to clean up too! 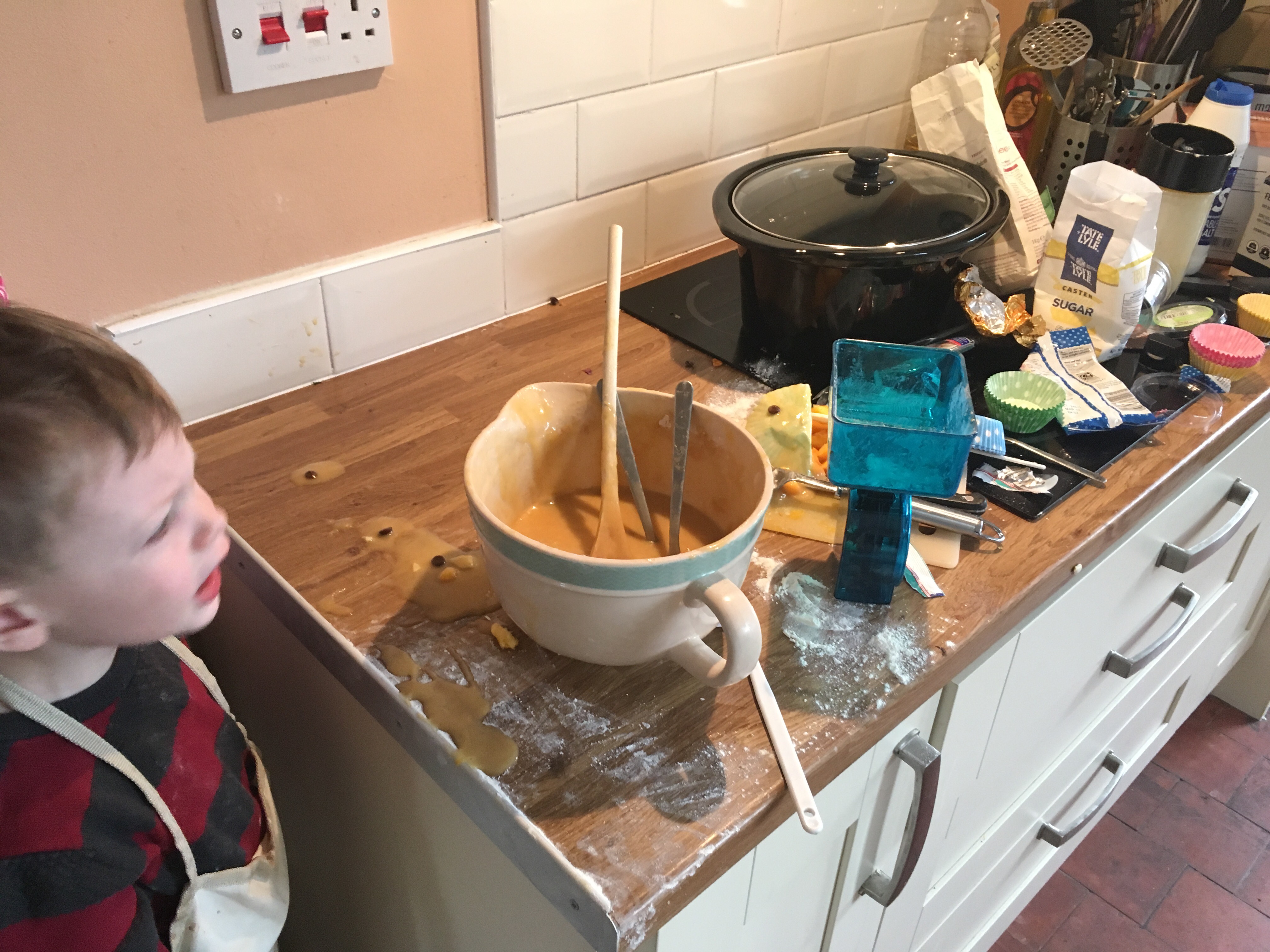 …and the mess!! And this didn’t even include the massacred pumpkin!! Admittedly we didn’t use the slow cooker, I was just too lazy to put that away from the night before…

Was it worth it? Well, I have to say, Baby Lighty was as proud as punch of his efforts, so despite the fact that my kitchen had turned into a crime scene, I’d have to answer with yes on that basis alone.

And when I asked him what the best part of making the cakes was, what was his response?

Well there you have it. The proof is in the pumpkin pudding! 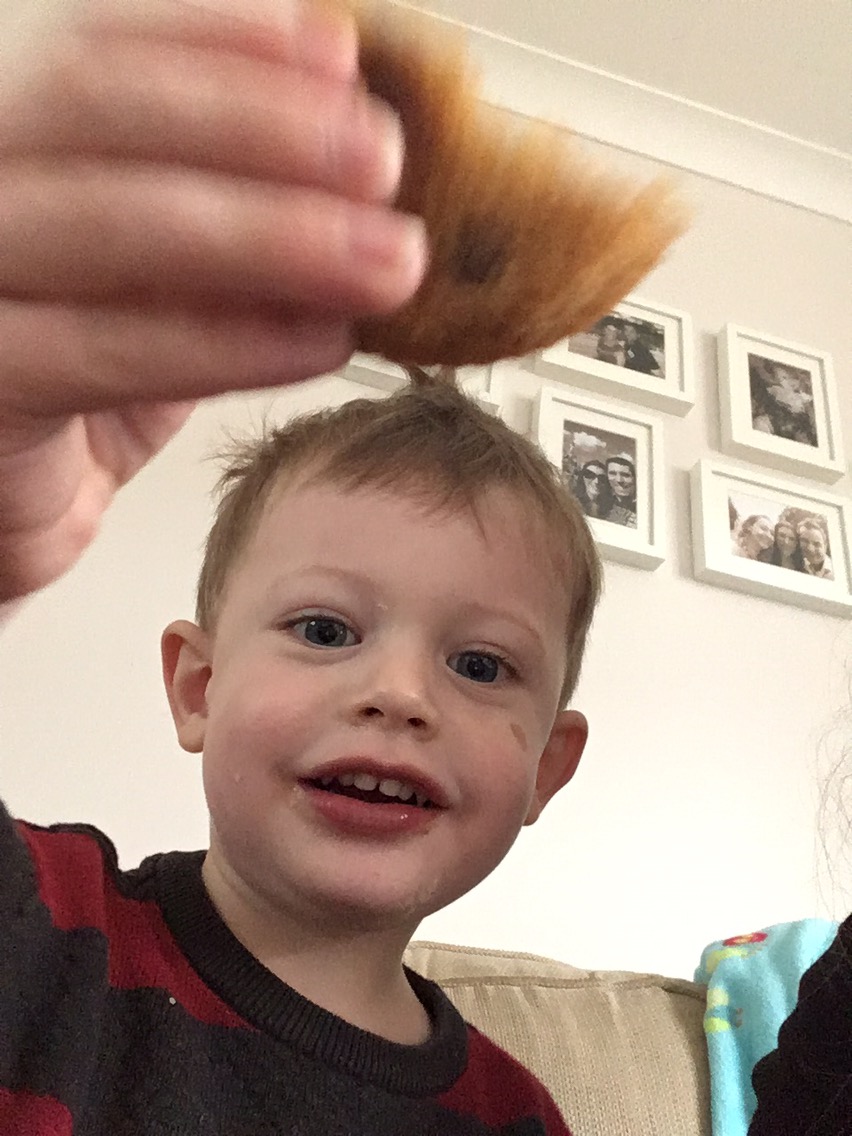 3 thoughts on “The Great Pumpkin Massacre”