Travel has always been a Lighty passion. It partially stems from the fact that Mrs Lighty worked for a decade in the travel industry, and partially from our general wanderlust. We are really fortunate that we’ve already done a few holidays abroad as a family – to Germany, Belgium, and of course, Disneyland Paris – as well as some UK based holidays. But, this post really shouldn’t have been called ‘The Baby and the Beach Holiday’; it should have been ‘The Toddler and the Beach Holiday’ (except that wouldn’t have any lovely alliteration now, would it?!), because as yet, we hadn’t been on what I call a ‘beach holiday’.

You know, where the days are spent by the pool or on the beach, lounging around, with nothing more taxing to do than read the latest chick lit novel…ok, so I knew that beach holidays nowadays would be far removed from this description, but that didn’t stop me from wanting to book one!! Which is why, earlier on this year, we took the plunge and did exactly that, booking a week in sunny Gran Canaria.

I must admit, in the lead up to our departure, I was feeling more nervous than excited. Aside from the cost of the holiday itself, we’d spent a small fortune on holiday essentials. I also made the mistake of looking at the weather forecast for Gran Canaria, which wasn’t as sunny as I would have liked. Having once been on a tour operator familiarisation trip to Crete where the rain just fell down for a week and the young family staying in our apartments had nothing more to do than rattled around the complex we were staying in, I was aware that there’s very little for a toddler to do on a beach holiday if the weather isn’t so good. So it was fair to say that the excitement was balanced with nerves!

Once we hit the pool, it was all that we could do to get him out! He seemed to think that we were only going to be on holiday for a day or two at the most, and was therefore extremely reluctant to get outp, almost as if he felt the need to cram all of his pool time in immediately, in case Mummy and Daddy took him home that night! We’d actually not told Baby Lighty that we were going on holiday prior to our departure, and I think we learnt from this that we do need to manage his expectations, otherwise the poor child won’t know what’s going on!!

The next few days, we took our Snap cards down to the pool with us, and each time we needed to get him out of the water, we taught him how to play Snap (top tip for any travelling toddler parents, take some Snap cards with you!!). We seemed to settle into a bit of a routine after our first few days, which mainly consisted of going for a little walk in the morning, to the local market, or to Maspalomas’ botanical gardens, or to the beach, pand then relaxing by the pool in the afternoon. The great thing about our hotel, the Hotel THe Koala Gardens, was the fact that we had a ground floor one bedroom apartment, whose terrace opened up straight onto the pool area. This gave us easy access down to the pool, and as we had sunbeds on the terrace, also allowed us some grown up chill out time if Baby Lighty wanted to nap of an afternoon. 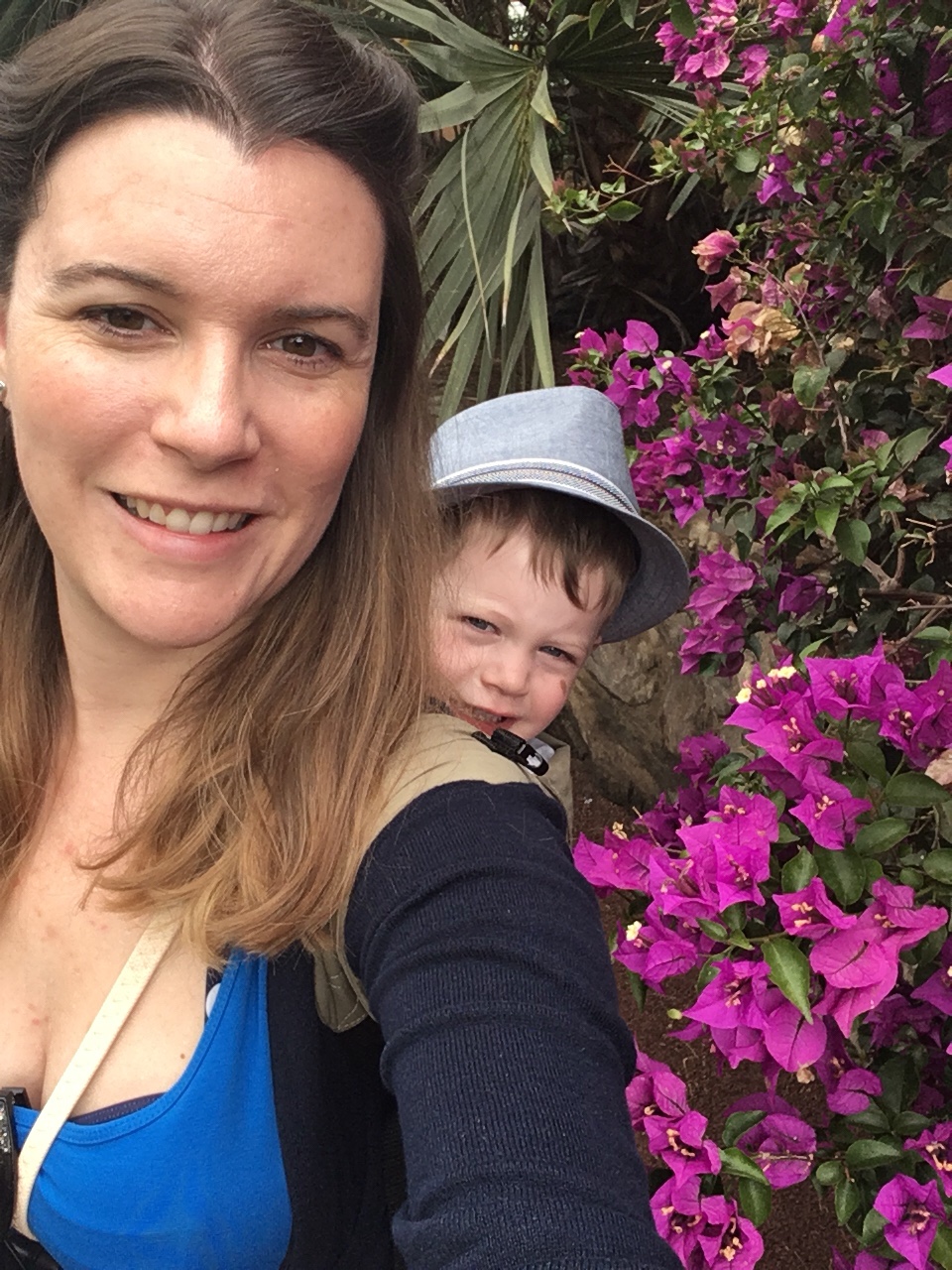 At the Botanic Gardens.

On our two beach days during our week away, we took the free shuttle bus from our hotel down to the lovely sand-dune-filled beach at El Faro de Maspalomas (Maspalomas Lighthouse). The walk beside the nature reserve promenade down to the beach is lovely, a really interesting landscape and Baby Lighty liked seeing the ‘living statues’ who reside there. We only did just over a half day at the beach each time, taking the 09:30hrs bus down to the beach and the 14:00hrs back to the hotel, partly because we were on an all inclusive board basis at the hotel and wanted to get back for lunch, and partly because it was so HOT!! The beach being much less sheltered definitely felt hotter than round by the pool, and we hired sunbeds and umbrellas to provide some shade, as I was really worried about the effects of the sun on Baby Lighty’s birthmarks this holiday. Nonetheless, we really enjoyed our beach days, especially seeing the little fish in the rock pools, and helping Baby Lighty to make sandcastles.

I’ve mentioned above that we were on an all inclusive board basis at the hotel. It was another thing that I wasn’t sure if Baby Lighty would take to or not, having never done this sort of holiday with him. He’s not a massively fussy eater, but if he gets tired he very much wants what he wants and nothing more. I was also worried about a lack of choice, as I know that some hotels we’ve been to basically offer a choice of chips, chips and more chips. It soon became apparent that we didn’t need to worry on this holiday; everything was lovely and fresh, with a few meat choices at both lunch and dinner, plenty of vegetables, a potato dish and a salad bar…oh and chips, if you did want them! Breakfast was a full hot buffet, continental options and plenty of fresh fruit and sweet treats too. There were also snacks available all day, every day. I kid you not when I say that one morning, Baby Lighty indulged in three sausages, beans and a slice of bread, a piece of chocolate loaf and an apple for breakfast, then said to Mr Lighty at 11:30am, “Daddy, please you get me a burger?”, then proceeded to have chicken, vegetables and potatoes at lunchtime!! I’m not entirely sure where he put it all; all that swimming must’ve burnt it off!! But if you can’t indulge on holiday, when can you?! And speaking of which, Mrs Lighty may have indulged herself, with a champagne breakfast on the day of the Royal Wedding! Well…I was on holiday!!

I’ve written before about Baby Lighty learning so much from travel abroad, and I feel like this trip was no exception. He was a little too young for the kids’ club, but I was allowed to go along with him to the pirate treasure hunt. It was the first time I’d seen him get stuck into something like this; he let the children’s entertainers paint his face, wore the hat that he made and held his own with the older children. It was lovely to see him try something new, and it really showed me that he’s well on the way to being ready for preschool and, further down the line, school (where has my tiny baby gone?!!!).

Something that really surprised us in terms of how much he enjoyed it was the evening entertainment. As well as a couple of visits to the local funfair, he really got stuck into things at the hotel, even though we felt that it may have been a little boring for two year old. It took him a while to warm up to the mini disco, but once he did, he really enjoyed himself, joining in with the other kids. I love that I now get  to enjoy him singing ‘Veo, Veo’ in his attempts at Spanish at home; I’d love for him to learn the basics of another language, and this is a sign that he’s probably capable of doing so. But it wasn’t just the kids’ disco that he got stuck into; he enjoyed the ‘show’ each night as he called it, delighting some people friends that we made with his dance moves on the two nights that there were singers, delighting in the parrots from the Loro Parque, who he would eventually go on to name the toy parrot that he bought with his holiday pocked money after, and laughing along at the interactive guest shows. On the first night, we even managed to come second in the music quiz! Baby Lighty actually got one of the answers by correctly identifying the song intro. He said into the microphone, “I know this, it Beauty and the Beast!” Even the quiz didn’t seem to bore him, and he said to us after that first night, “I loved the show!” The evenings were definitely one of the favourite parts of our holiday. 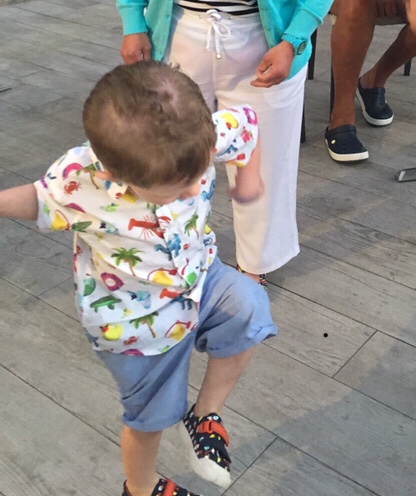 Throwing some moves on the dance floor!!

Overall, I just loved seeing the beach holiday experience through Baby Lighty’s eyes. I really, really wish we’d been able to afford to do it sooner, and I hope that we’ll be able to do it again in the next few years. When it comes to the baby and the beach holiday, I think Baby Lighty summed it up perfectly himself: a few days after we’d returned home, he was sat on my lap one day when he turned to me and said “Can we go back on holiday?”

Oh Baby Lighty, I really wish we could!