As many of my readers and friends will be well aware, Mr and Mrs Lighty both love a spot of babywearing. Indeed, we have even been known to bicker over who gets to wear Baby Lighty on occasion, and we always have to pack both of our trusty Connecta Baby Carriers, as one print is my favourite and one is Mr Lighty’s favourite and we’ll usually both want to wear him while out and about. So imagine my dismay yesterday as I sat and watched a certain popular daytime television programme talk extremely negatively about babywearing, and do nothing to dispel often incorrect babywearing myths. 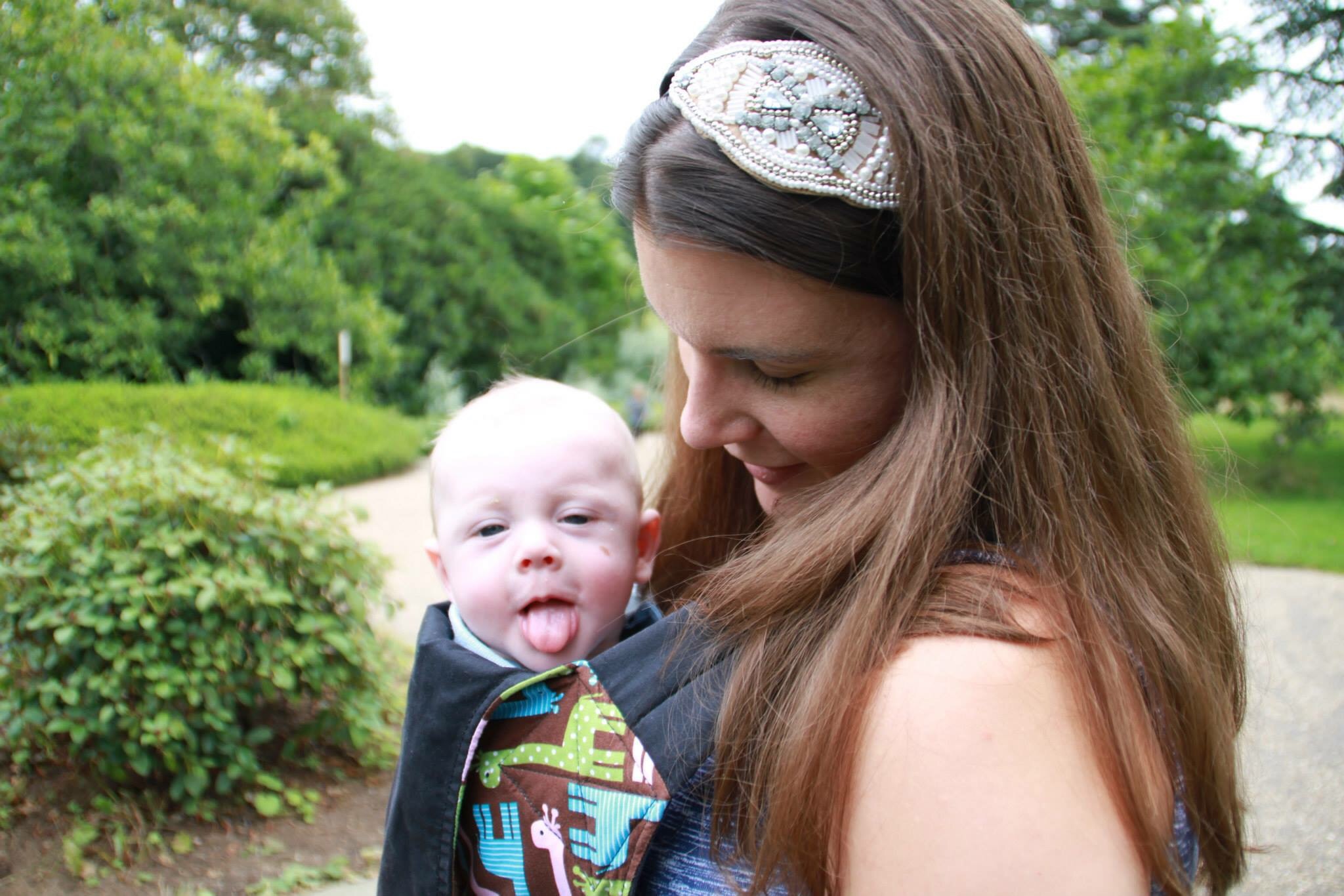 No one can claim this cheeky little chappy doesn’t like being in the sling!

I sat and watched the panel talk about the rise of the so-called ‘pack-pony’ parenting culture – i.e. carrying your child even once they could walk – and wonder why these comments were being made if these mothers hadn’t ever babyworn themselves? Did they not know that, actually, it’s a complete babywearing myth that it ‘breaks your back’? Did they not realise that often, carried children are secure enough in themselves to be of an adventurous nature when set down from the sling? Or that, actually, it’s easier to carry a rolled up sling in your bag for the times when your little one tires of walking and needs to be carried than it is to lug an empty buggy around after them?

I sat there shaking my head, then did what I normally do: took to Twitter. But the more I thought about it, the more I realised that I didn’t want to rant too much, as, at the end of the day, parenting is always a matter of choice. And babywearing isn’t for everyone. But it would be a mighty shame if someone was put off of babywearing simply because of a daytime television programme incorrectly sprouting some babywearing myths, wouldn’t it?

So, if you are thinking about babywearing, I’m here to bust some of those babywearing myths or at least just add some general comments and thoughts on wearing your baby, toddler or child:

Far from it, actually. Babywearing distributes the weight of your baby evenly across your back, making it much easier to carry them. It’s why we’ve taken the sling with us to weddings and birthday parties in the past, as if he gets tired and needs carrying, it’s easier to pop him in the sling than just carry him in our arms. I wouldn’t ever attempt a walk without a sling, as I couldn’t carry Baby Lighty for a long distance just in my arms when he gets tired of walking. 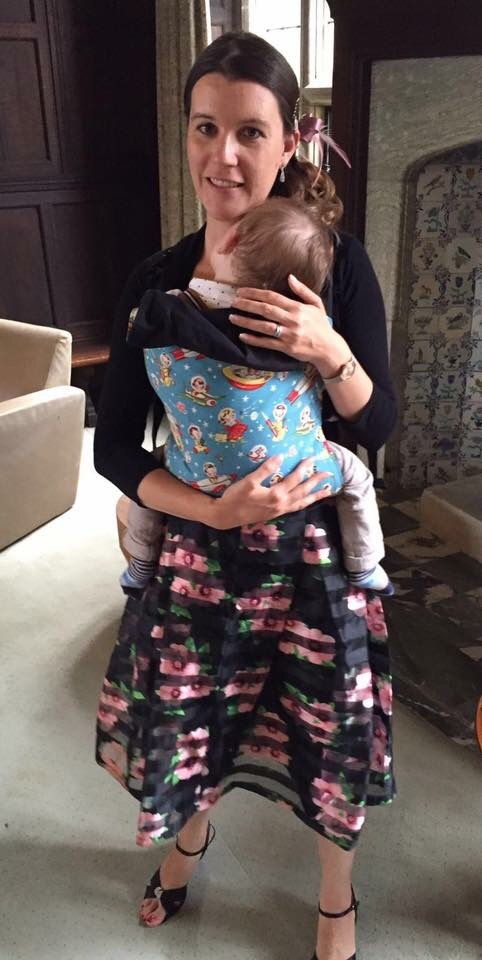 Doesn’t everyone accessories with a baby in a sling at a wedding?!

Babywearing Myth 2: A child doesn’t need to be carried once they can walk as they’ll become lazy

See myth 1. Does a child that can walk need to be carried in your arms occasionally? Yes of course they do. The sling just facilitates this. The same wouldn’t be said about a buggy, once a child can walk. Parents regularly use buggies over long distances without comment, so why not use the sling?

I find it actually encourages me to get Baby Lighty walking more, as I know that I’ve got the sling as back up for when he does tire. We went to a country park at the weekend, and at 19 months old, Baby Lighty easily walked half a mile before asking to be picked up. At that point, out came the sling for the rest of our hour’s walk! There’s no way he could’ve managed as long a walk as Mr Lighty and I, and so taking the sling meant that we didn’t have to lug an empty buggy with us across the uneven terrain. 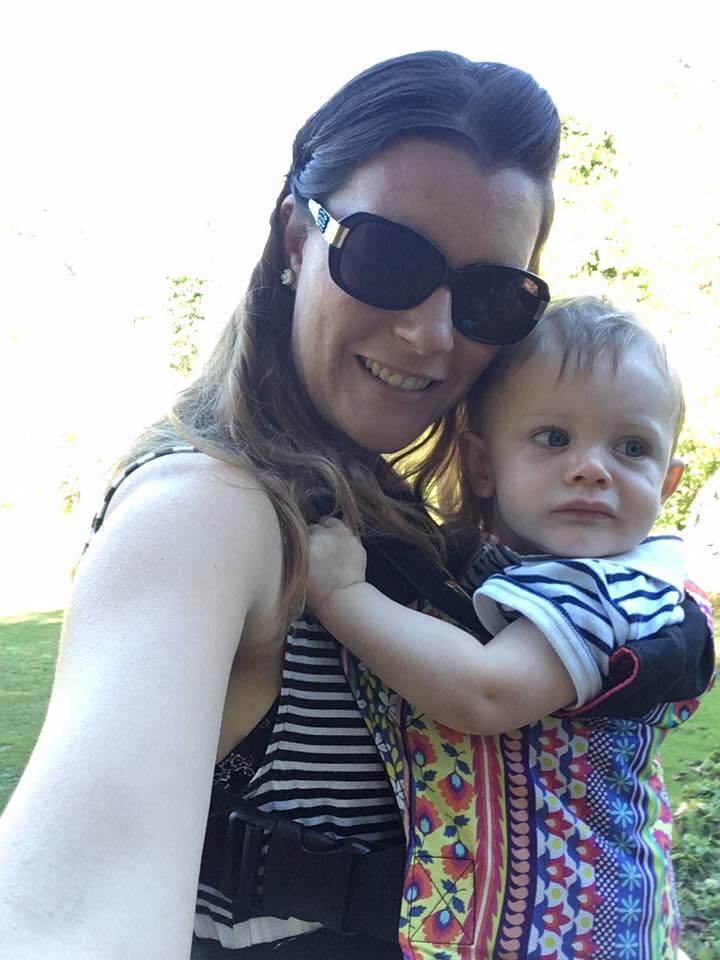 In the sling in September 2016 at 15 months, having tired his little legs out after walking for hours.

Now I know that I have nothing to compare him to, but I would not say that Baby Lighty is clingy. In fact, he’s probably a bit too curious and independent, if you can be such a thing! He’s never once cried when we’ve left him at the childminder’s, and when he’s actually in the sling itself, one of his favourite pastimes is to have a little nose at his surroundings, often playing peekaboo with fellow passengers on the bus, or waving and shouting “hello!” at them. 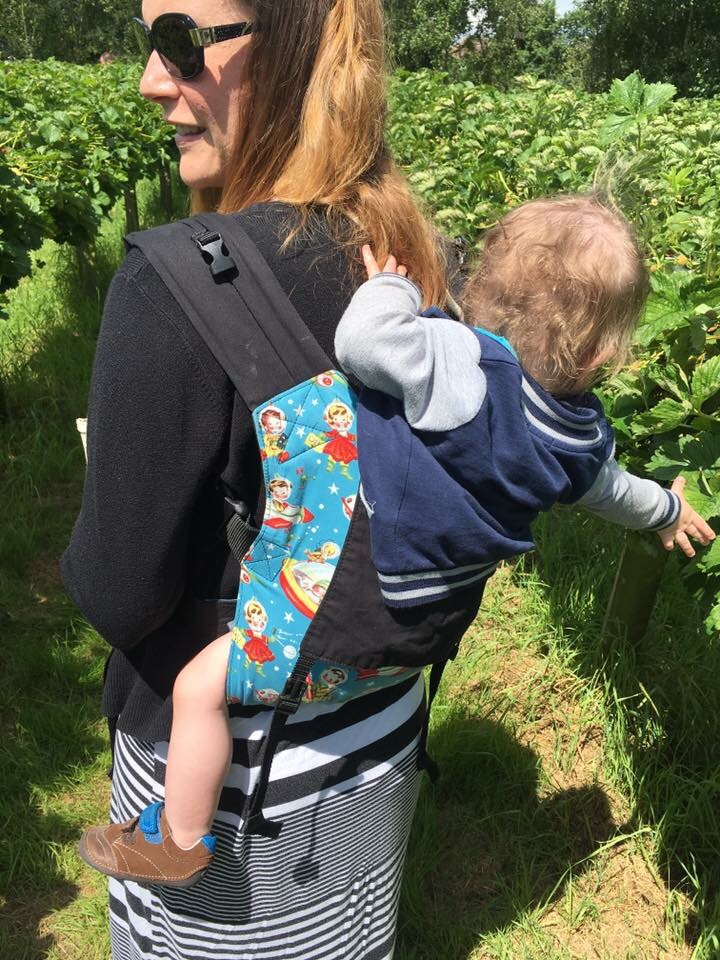 My extremely non-clingy, adventurous and inquisitive toddler trying to pinch some strawberries!

Babywearing Myth 4: Once a child gets to a certain age, they won’t want to parent-face any more

Well, I can tell you, that at 19 months Baby Lighty is still more than happy to parent face, and yet he is one of the most inquisitive children I’ve ever come across. I wear him almost exclusively on my front, and as soon as he sees that I’m putting the sling on, he runs around in excitement shouting “Shoes! Coat!” and finding the relative attire for me to dress him in as he knows it means an outing is on the cards for him. He can’t be that worried about still being parent-facing, judging by that reaction. 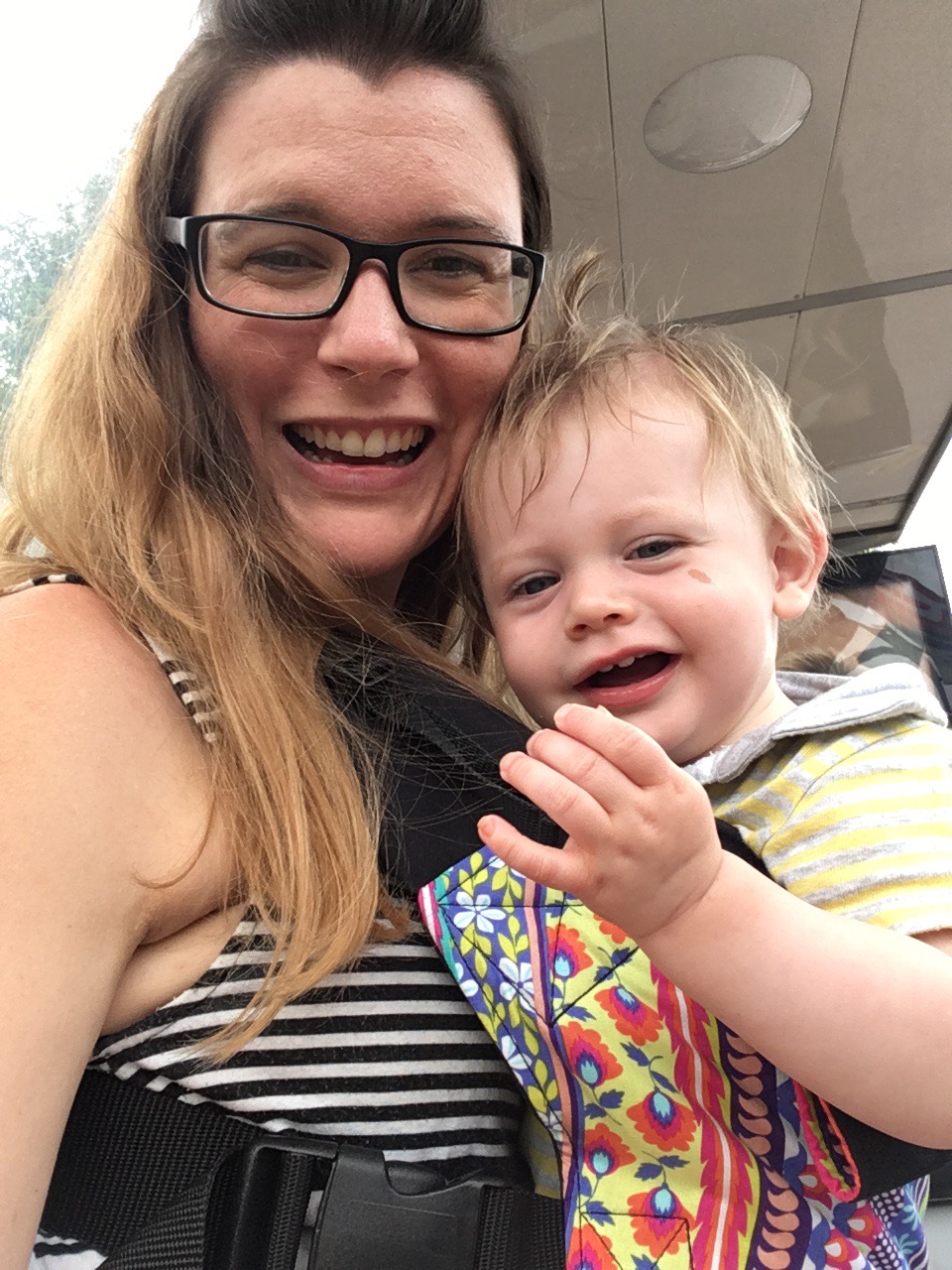 And if they do get sick of parent-facing, well what do you think a hip carry or back carry is for?!

Babywearing Myth 5: Babywearing is only for ‘hippy’ mums or ‘attachment parents’

No, actually, it’s not. And quite frankly, even if I am a hippy mum, I don’t really care. It’s true that I do follow some of the principles of gentle parenting, and we did Baby Led Weaning, but I didn’t breastfeed for longer than a month, and we don’t co-sleep. But that’s not to say that I think that breastfeeding or co-sleeping or any parenting techniques that aren’t neglectful or harmful to the child are wrong. Babywearing won’t be everyone’s choice, either, and that’s fine too. We all do what’s best by our families, and what suits our children’s needs.

And that’s kind of my point, I suppose. For me, babywearing is about attachment to a certain extent; it’s about allowing Baby Lighty to enjoy fireworks because he knows that he’s snuggled up safely next to Mummy in the sling, it’s about allowing him to get some shut eye on Daddy after having a very exciting day whilst on holiday, it’s about giving him some comfort when he’s feeling poorly and it’s allowing him to feel secure as I go about my daily tasks when, for example, he’s feeling a bit wary because there’s plumbers that he doesn’t know in our home fitting a new boiler. 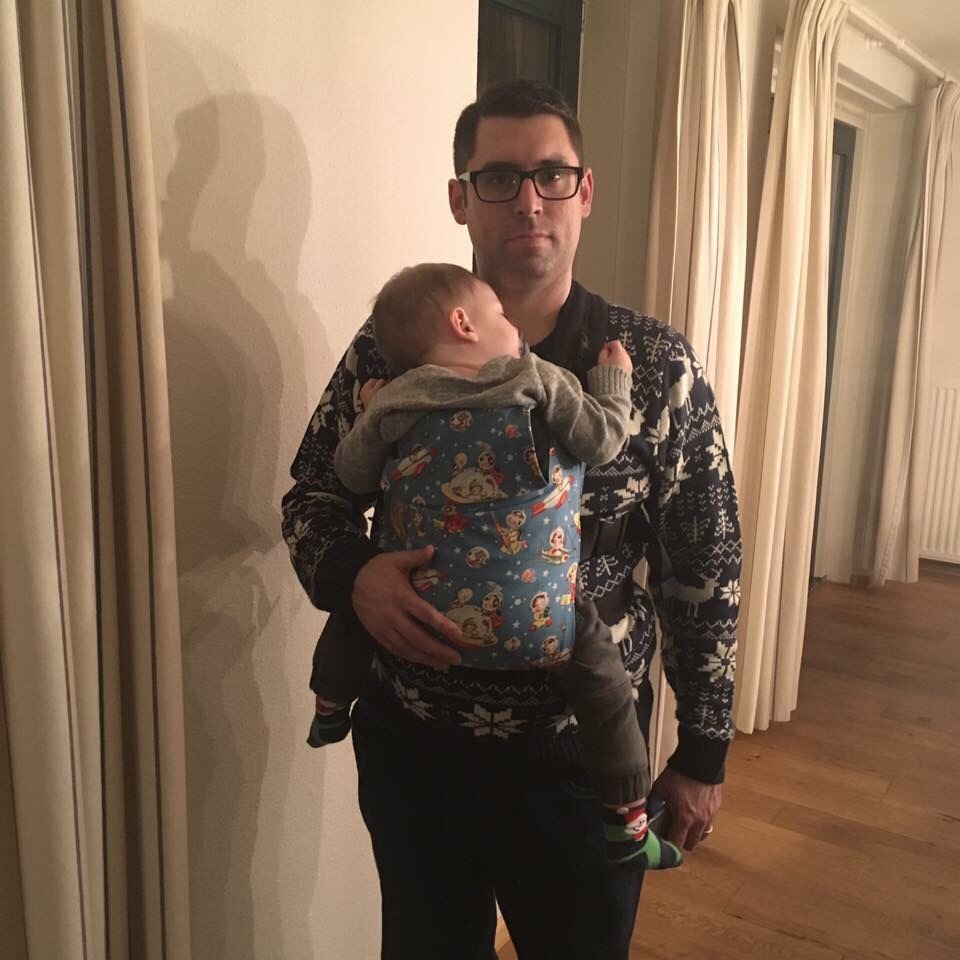 Napping on Daddy after a busy day of soft play and swimming whilst we were away at New Year!

It’s also about convenience on public transport and convenience when on long walks or in places where it’s not necessarily suitable for Baby Lighty to walk; it’s about giving him a vantage point from which to see the world, it’s about having our hands free during those times when he wants to be close to us but we still have chores to do.

And I suppose that’s why I’m currently thinking about upsizing to a toddler sling, and why I’ll carry on carrying him while he needs me to. He’ll only be little for such a short space of time, after all. If you’re considering it, don’t let Babywearing Myths put you off: it really is a wonderful experience for both the parent and child.

If you fancy something a bit more ranty on the subject but very eloquently put, my lovely friend Abi of Something About Baby has a wonderful open letter to the production team of Loose Women over on her site now!